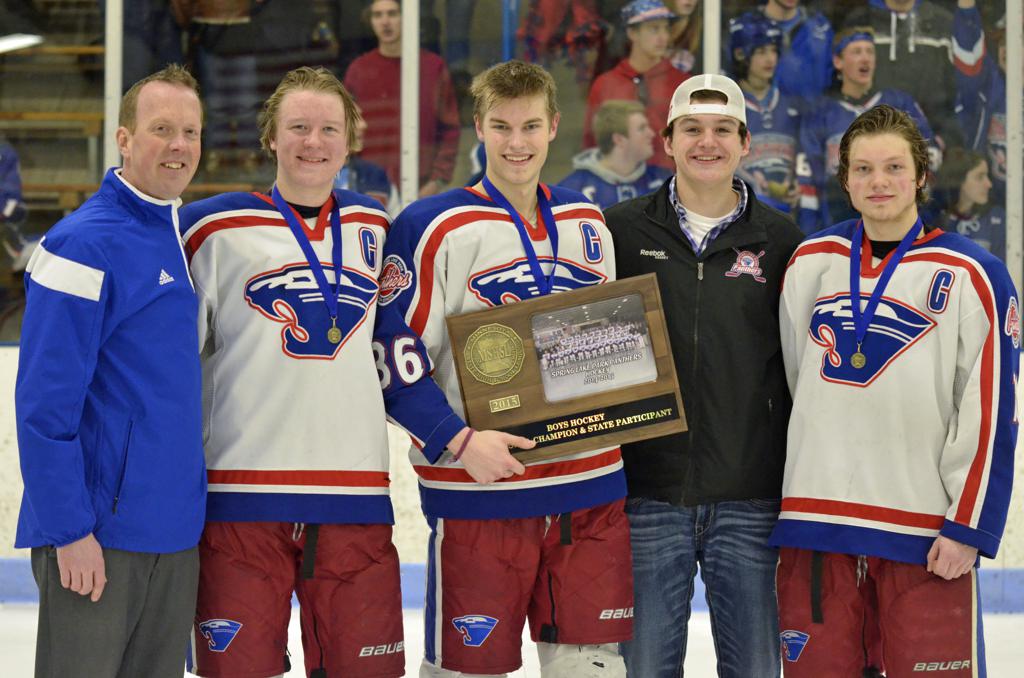 Noah Bormann had a message for his team.

The Spring Lake Park senior captain needed his teammates to understand the significance of opportunity they had at hand in the Class 1A, Section 5 championship game Thursday night at the Isanti Ice Arena.

So Bormann, who was out for the game and won’t play the remainder of season due to a possible stress fracture in his spine, issued a clear and simple statement.

"Come out hard," he said. "(The game) is a chance to make history for Spring Lake Park.”

Five goals and 51 minutes later, the team proved it received Bormann's message as the top-seeded Panthers shut out second-seeded Chisago Lakes 5-0 to advance to the state Class 1A tournament for the first time in the program’s history.

As the buzzer sounded, Spring Lake Park's players threw off their gloves and helmets and climbed the boards celebrating their accomplishment.

“It’s been a long time coming, and we’ve waited a long time to get this opportunity,” Panthers coach Tom Benson said.

The victory was indescribable for senior Jacob Nystrom.

Nystrom had no trouble finding the words to detail his ankle injury, posting on Twitter a few weeks ago that “There’s a softball in my ankle.”

And Nystrom had no issue overcoming the injury and contributing in the victory.

Playing with the ankle taped up, Nystrom tallied a goal early in the second period to give Spring Lake Park a 2-0 lead. It was the third postseason goal and 28th of the year for the Panthers’ leading scorer.

Nystrom’s ankle should be healed by the end of next week, allowing him the chance to cap his career by playing in the state tournament.

That is not the case for Bormann, who plans to continue being the team’s biggest cheerleader while sitting out as his back heals.

“I have to not be selfish, and I still have to be a big part of the team,” he said. “As a captain, it’s a big role for me to cheer them on.”

“Kids rally around him, and he’s one more motivator to get us to the next step,” Benson said.

Spring Lake Park (16-11-1) is in position to take another step thanks to the play of goalie Aaron Furlano, who finished the night with 19 saves and record only his second shutout of the year - both coming in the postseason. Furlano improved his season record to 16-10-1 and has a 2.98 goals against average and a .903 save percentage, but the junior said stats were not his focus against the Wildcats.

“It’s the win that matters; it’s great for the community,” Furlano said.

A big win for the Spring Lake Park community is also a dream come true for Deven Sunell, who imagined making it to the state tournament as a child.

“I used to pretend with knee hockey sticks that I used to be there, and it’s happening now and it’s a great feeling,” said Sunell, who is the Panthers’ second-leading point scorer this season with 45. The senior forward recorded two assists in the section final, increasing his season total to a team-best 26.

For senior Zack Johnson, the win is the melding of two crazy dreams. The 6-foot-5 senior is making his second appearance in a state tournament this season. Johnson was a member of Spring Lake Park football team that made it to the Class 5A tournament, where it lost to Simley 21-14 in the semifinals.

“I never thought I’d be in two state tournaments my senior year,” Johnson said. The defenseman tallied only his second goal of the season when he opened the scoring for the Panthers with less than 5 minutes to play in the first period of the game against Chisago Lakes (10-16-2). Scoring a goal in a section final was something Johnson said he thought would never happen.

Several other seniors played a major role in Spring Lake Park’s victory, including Aaron Murphy, who had a goal, and Zach Crawford and Eric Alexander, who each had an assist.

“I love our seniors,” Furlano said. “Every single one of them fought hard this season, and they deserve it.”

Nystrom said getting to a state tournament was always a goal but not one expected this season, making the bid quite an accomplishment.

“It’s every hockey kid’s dream to play in the high school state tournament, and we did it,” Furlano said. 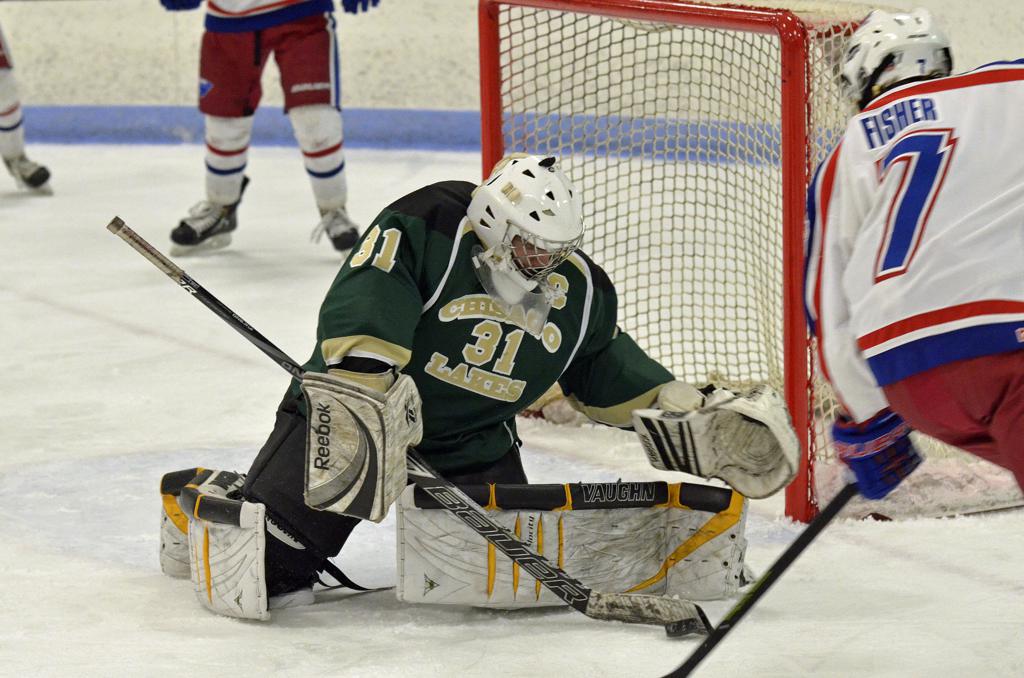 Junior forward Connor Gagnon had a goal and two assists, helping top-seeded Spring Lake Park advance to its first state tournament after shutting out second-seeded Chisago Lakes 5-0 in the Class 1A, Section 5 championship at the Isanti Ice Arena on Thursday.

The Panthers (16-11-1) could not convert on two early Wildcats’ penalties and finally opened the scoring when senior defenseman Zack Johnson netted a goal with 5 minutes to play in the first period.

Gagnon and junior forward John Kelly each scored power-play goals early in the third, and a goal from senior forward Aaron Murphy with 6 minutes to go in the game rounded out the scoring.

With 5 minutes to play in the third period, Chisago Lakes had a 5-on-3 advantage but could not put anything past Panthers junior goalie Aaron Furlano, who finished with 19 saves.