East Grand Forks senior Dixon Bowen’s speed isn’t limited to his obvious physical attributes. Present the Mr. Hockey finalist with an on-ice problem, such as a hot goalie or a far-away empty net, and it doesn’t take him long to process the information and compute a solution.

Such was the case when Bowen scored twice in defending champion East Grand Forks’ 4-0 victory over New Prague (20-9-0).

Bowen, who has committed to play at North Dakota, had his first-period breakaway blast stopped by the blocking glove of standout New Prague Conner Wagner. So when Bowen found himself in alone on Wagner again early in the second, the data told him to do something different.

“I probably learned to deke instead of shoot,” Bowen said about his strategy on his second solo chance against Wagner.

Bowen did, indeed, stickhandle around the attempted poke check of Wagner before depositing the puck high in the net to open the scoring 6:58 into the second period. The goal held up as the winner for the defensively dominant Green Wave (24-4-0), and Bowen sealed the victory with a length-of-the-ice shot with 37 seconds remaining. The empty-net goal came after Bowen and his teammates had misfired on numerous close-range shots at the open net in the closing minute.

“I don’t know about that,” Bowen said when asked if he had learned standing farther from the empty net would give him a better chance to put the puck in it.

Senior forward Dixon Bowen scored twice and senior goaltender Josh Weber made 17 saves to propel East Grand Forks to a 4-0 victory over New Prague on Wednesday in the quarterfinals of the Class 1A state tournament at Xcel Energy Center in St. Paul.

The victory advances the defending state champion and No. 3-seeded Green Wave (24-4-0) into Friday’s semifinals, where they will play No. 2 seed Mahtomedi (25-2-2) in an 11 a.m. start. Mahtomedi is ranked second in the state, and East Grand Forks is ranked third.

Bowen, a Mr. Hockey finalist who has committed to North Dakota, failed to score on a first-period breakaway after blocking a point shot and racing in alone on New Prague goaltender Conner Wagner. But Bowen made no mistake when he cut in alone in front Wagner in the second period, flipping a shot high over the shoulder of the sprawling goaltender. Bowen also scored into an empty net in the final minute. The goals were Bowen’s team-leading 26th and 27th of the season.

Cooper Jerome, who had scored one goal all season entering the tournament and is listed as a fourth-liner on the East Grand Forks depth chart, gave a rebound shot by Braden Shea an extra shove as it was headed across the goal line. The goal put the Green Wave ahead 2-0 with 12:26 left in thethird. Nick Derrick also scored for East Grand Forks in the third.

Among Weber’s saves was a key second-period breakaway stop on Casey Busch with the game still scoreless.

Wagner finished with 27 saves for the Trojans. 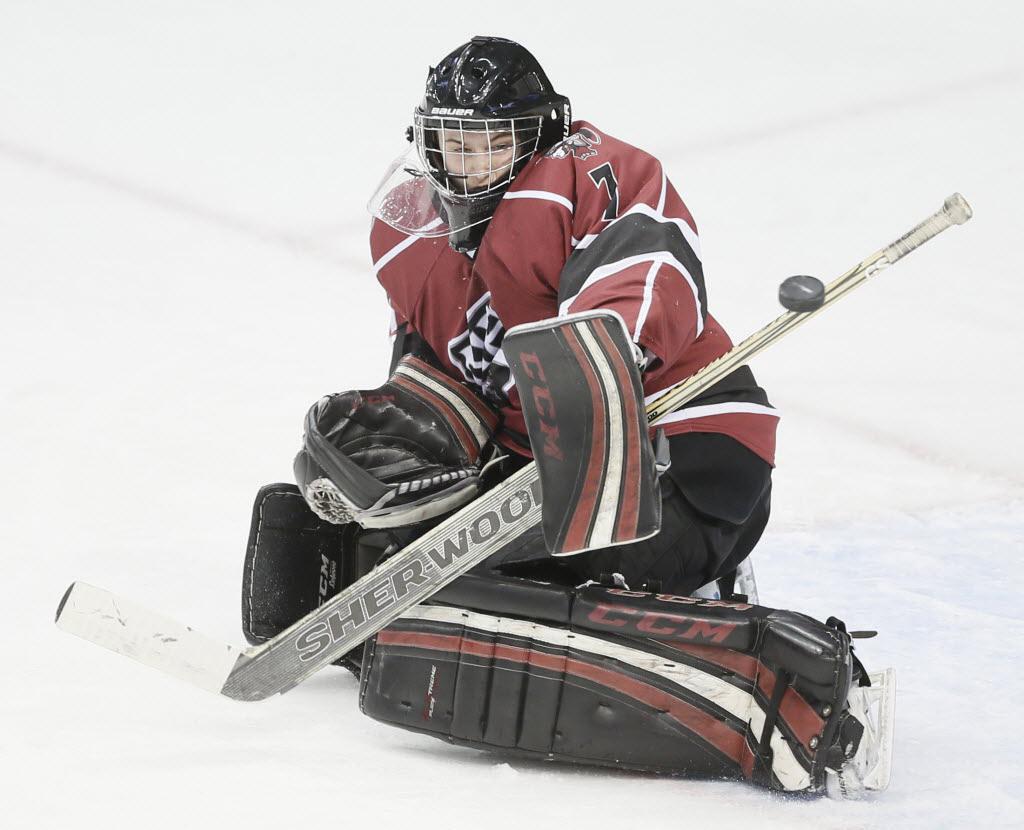 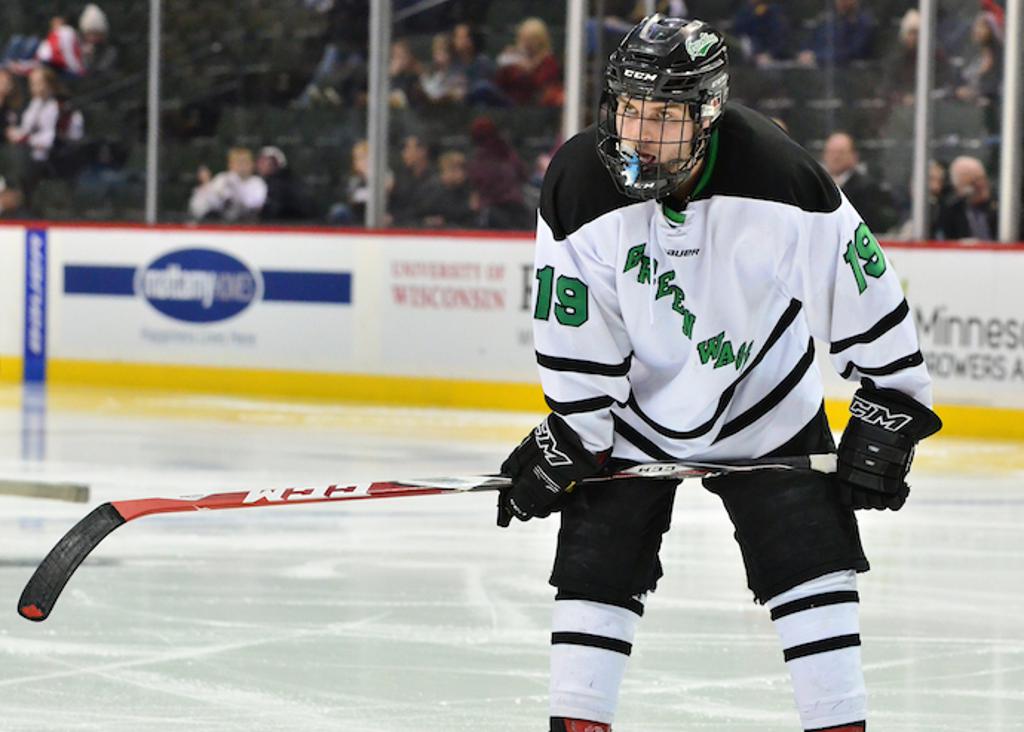 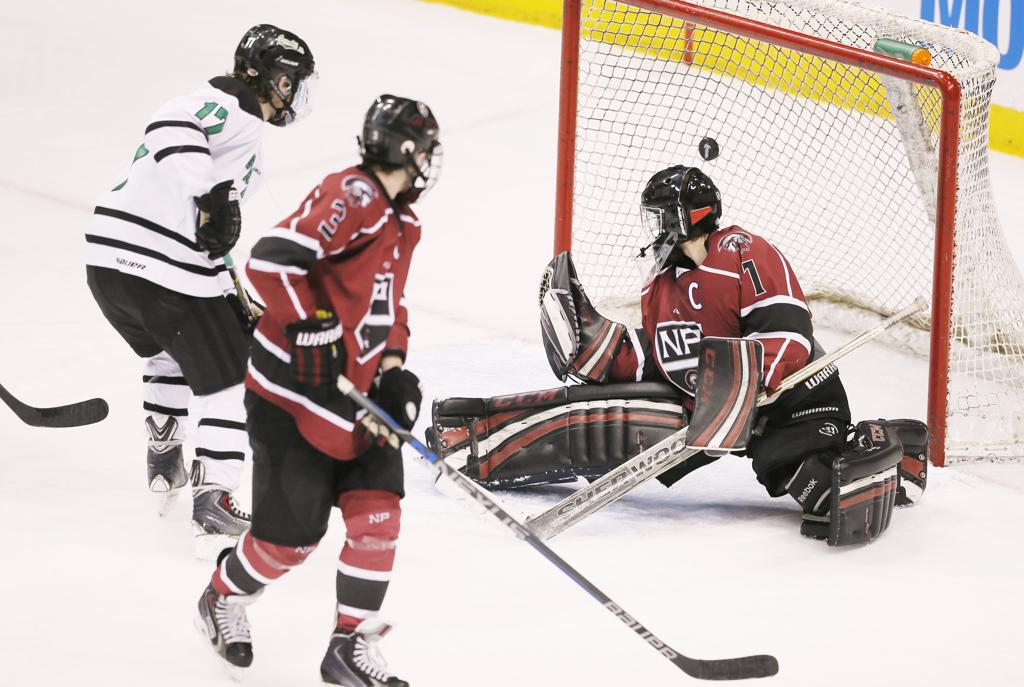