An unseeded Duluth East team that barely finished above .500 in the regular season, that benched its star goaltender for a three-week stretch in the middle of the season, that doesn’t have a single Mr. Hockey candidate or player committed to a Division I college now finds itself playing for the Class 2A state championship.

How did that happen?

The Hornets were the latest high-profile victim in what has been a magical postseason run for Duluth East (16-10-4), which has now won four consecutive games against higher seeded opponents.

Edina (25-2-2) played without injured senior Dylan Malmquist, the program’s career scoring leader and a Mr. Hockey finalist who has committed to Notre Dame.

“What we have done is come together as a team,” Altmann said about Duluth East’s recovery from a dismal start to the season. “I think we all kind of realized, if we are going to do this, we are going to have do this together.

“At the beginning of the season we weren’t a team, we were apart from each other. Now we’ve come together and we’ll sacrifice anything for each other.”

Altmann scored on a diving swat of the puck 31 seconds into the second period to put the Greyhounds ahead 2-1.

Ash Altmann, Nick’s younger brother, scored on a breakaway with 2:41 left in the third period to clinch the victory. Ash, a junior, had been stopped by Edina goaltender Kobi Boe earlier in the game.

“I didn’t score on the first one, so I knew I had to redeem myself,” Ash Altmann said. “Fortunately I did.”

“I was thinking he better put that one in or I am going to kill him,” Nick said about watching Ash on breakaway try No. 2.

More from the press conference

Duluth East upsets Edina in the Class 2A semifinals

Duluth East and the team's many fans in the crowd at the Xcel Energy Center celebrate the Greyhounds' 3-1 upset of two-time defending state champion Edina in the Class 2A semifinals on March 6.

Ash Altmann’s breakaway goal with 2:41 left completed the scoring for the Greyhounds (16-10-4) and had much of the pro-Duluth East crowd roaring in approval.

Edina (25-2-2) played without injured senior Dylan Malmquist, the program’s career scoring leader and a Mr. Hockey finalist who has committed to Notre Dame.

Patrick Haug opened the scoring for Edina in the firstperiod. Duluth East’s Luke Dow tied the score at 1 late in the first, and Nick Altman put the Greyhounds ahead 2-1 just 31 seconds into the second.

It was the Greyhounds' fourth consecutive victory over a higher seeded opponent. 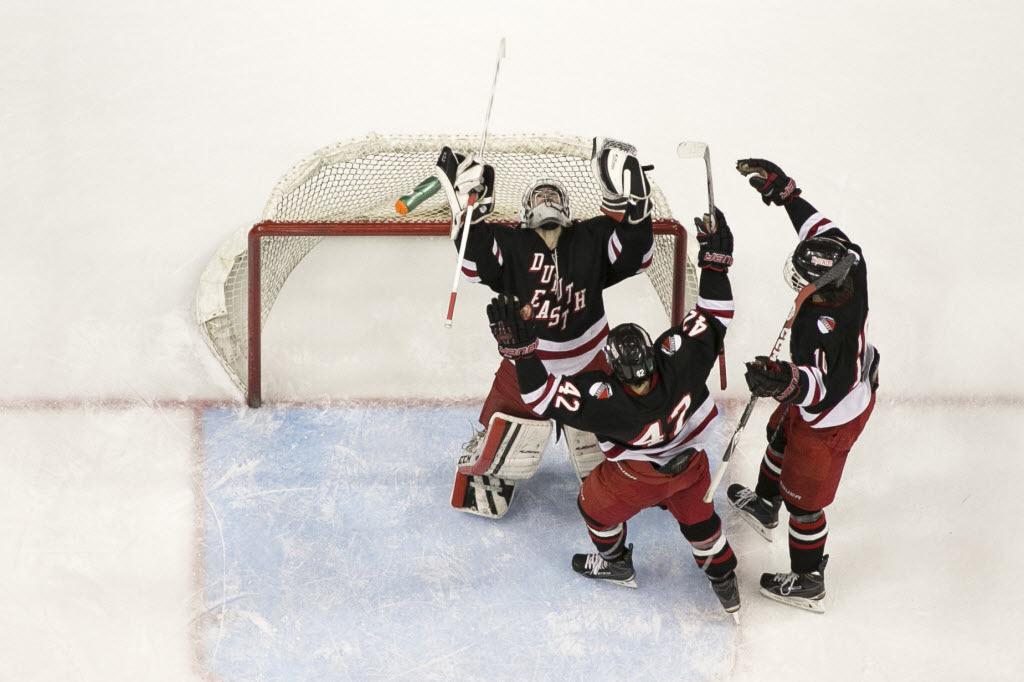