Will Swanson knew the hook was coming, whether he liked it or not.

During Sunday’s Minnesota National Invitational championship game at the Plymouth Ice Center, the Mahtomedi goaltender started for the Minnesota HP-18s. But like every contest throughout the tournament, Swanson split time with Tartan goaltender Michael Hughes.

“I don’t think you ever want to come out of the game,” Swanson said. “Today, it was my game to start and Tyler’s to finish.”

Sunday’s substitution may have been harder to swallow than the others, as Swanson had just successfully stonewalled the Michigan Seniors’ 5-on-3 power play five minutes earlier to keep Minnesota’s lead at one goal. That sequence proved to be a game changer as Minnesota wouldn’t extend its lead until the third period, eventually pulling away for a 6-1 victory and the tournament title.

On that crucial two-man advantage, Swanson found pucks being fired at him from all over the ice. However, Swanson didn’t crumble under the pressure as he calmly caught, poked and covered up pucks to maintain Minnesota’s 2-1 lead.

“In those situations, you just have to take it one shot at a time,” Swanson said. “I was pretty fired up after we held them from scoring.”

Swanson made eight saves against Michigan and finished with 62 in the four-game tournament, helping Minnesota to a 4-0 record. His .939 save percentage was third-best in eight-team field, and he posted a 1.59 goals-against average in a little more than 135 minutes of game action.

Swanson is no stranger to high-pressure situations. In March, the junior led Mahtomedi to a Class A state tournament appearance that ended with a third-place trophy heading back to his school.

Playing in 31 games during the high school season, Swanson posted a 26-3-2 record - his 21 regular-season wins were tied for second-most in the state - and finished with a .906 save percentage and a 2.30 goals-against average.

Luckily for Swanson, he doesn’t have to worry about any substitutions while wearing a Zephyrs’ uniform.

“I want to be the guy each time I put on the pads,” Swanson said. “With these all-star tournaments, that doesn’t always happen.”

Mahtomedi lost in the Class 1A semifinals to eventual state champion East Grand Forks, and Swanson said participating in the NIT will prepare him to lead the Zephyrs to the next level – a state championship.

“It’s really helped me to play with, and against, all of this talent [in the offseason],” Swanson said. “Being exposed to some great offensive players should pay off next season.”

Swanson is still unsure of his hockey plans after his Mahtomedi career ends, but he could garner the attention of college programs because the 6-foot, 170-pound goalie has shown the skills to succeed.

“I saw Will three weekends ago at a hockey festival in St. Paul, and he was probably the best goalie there,” said Minnesota HP-18s coach Mark Manney, who also heads the boys' high school program at Andover. “He’s got good size, he is fundamentally sound and he challenges shooters. He does all the things you want in a goalie. I would definitely want him on my team.” 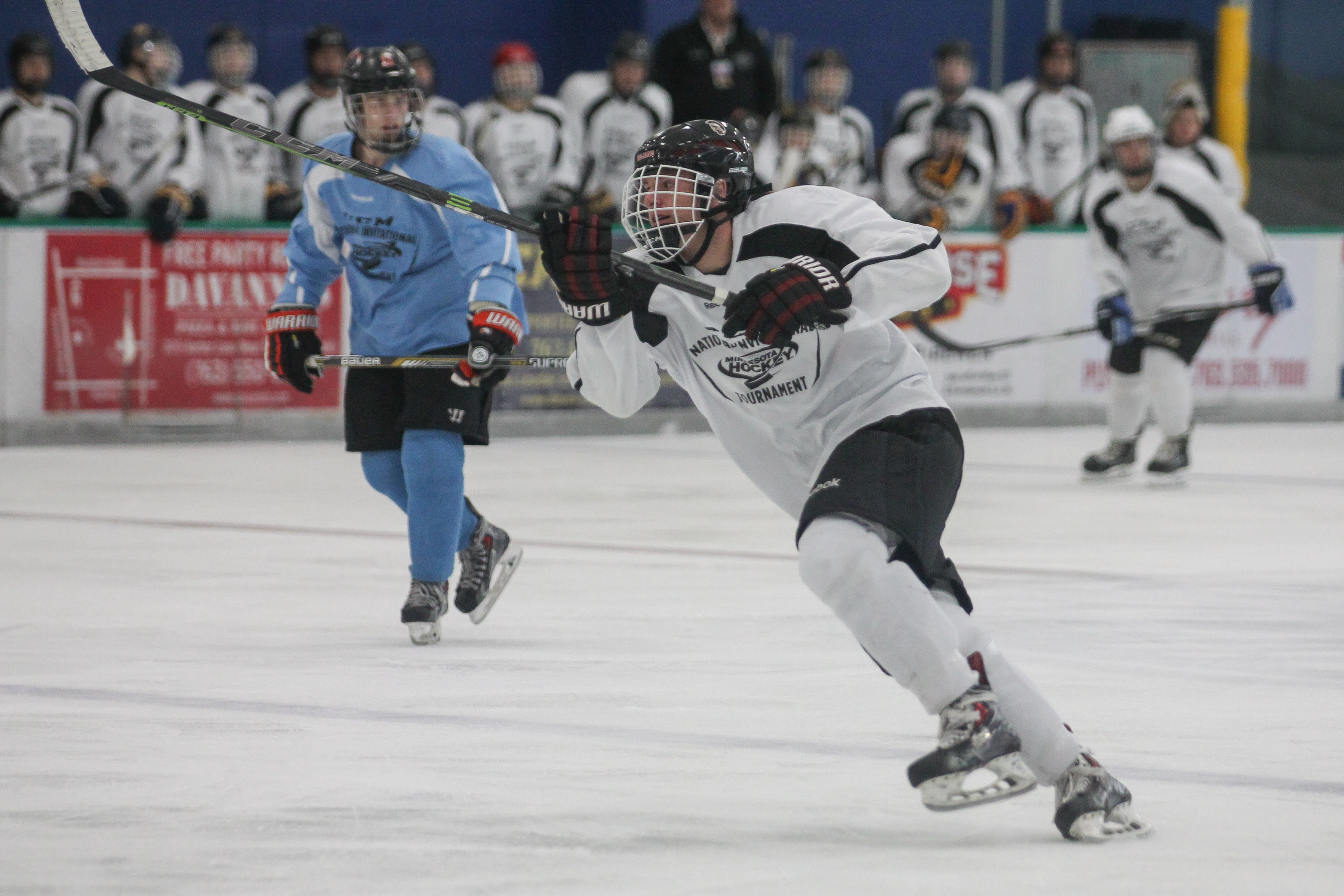 Something had to give when the Minnesota HP-18s and the Michigan Seniors met in the CCM Minnesota National Invitational championship game Sunday at the Plymouth Ice Center.

Fortunately for Minnesota, it wasn’t starting goaltender Will Swanson.

The Mahtomedi junior allowed only one goal while anchoring his team to a 6-1 victory.

Swanson, who led the Zephyrs to a Class A state tournament appearance in March, shut the door on a crucial 5-on-3 power play that stretched from the first period into the second.

At the time, Minnesota HP-18 was barely holding on to a 2-1 lead and Swanson stood tall to maintain the advantage.

Swanson made way for Michael Hughes, of Tartan, halfway through the second period, and the duo combined to finish with 27 saves.

Both Minnesota and Michigan entered the championship game after topping their pools with unblemished records, and it took a while for the teams to feel each other out. Minnesota eventually broke through in the first period as New Prague’s Alex Gregor and Holy Family Catholic’s Will Garin scored 20 seconds apart to take the early 2-0 lead.

Michigan cut the lead in half later in the period when Nicholas Borellis, of St. Mary’s, scored on the power play before Swanson locked down on the 5-on-3 power play.

After a scoreless second period, Gregor allowed Minnesota to breathe a little easier as he scored his second goal of the game at the start of the third period. Gregor added another goal five minutes later to complete the hat trick.

Alex Adams, of Grand Rapids, finished with a goal and an assist and East Grand Forks’ Tanner Tweten had a goal for Minnesota.