Hill-Murray’s leading goal scorer Marko Reifenberger had been ice cold recently, finding the net just once in February.
Things weren't going any better in his chemistry class on Tuesday. The Pioneers junior had his sweatshirt sleeve nearly catch fire after it grazed the flame of a Bunsen burner.
“We were just in lab and something happened, and I couldn’t stop it, but it was kinda scary,” Reifenberger said.
Something did happen to Reifenberger. After a close call in class just a day earlier, the forward hit the ice Wednesday night embodying that flame and ignited second-seeded Hill-Murray to a 5-2 victory over No. 6-seeded Woodbury in a Class 2A, Section 4 semifinal at Aldrich Arena.
Reifenberger scored twice, with his first goal capping an offensive flurry in the second period that put Pioneers firmly in control.
The goals were his first of this postseason, one in which Hill-Murray (17-8-2), ranked No. 16 in the Class 2A coaches’ poll, has scored sporadically in the postseason.
Aside from Reifenberger's shorthanded empty-netter in the final minute of the game, the Pioneers have scored 8 of their 9 goals in the playoffs in just two periods.
Hill-Murray rattled off four goals in the third period to rally for a victory over Mounds View in the quarterfinals on Saturday.
On Wednesday, the Pioneers gave up a goal to Adam Albright in the waning minutes of the first period and entered the second staring at a 1-0 deficit against the Royals (13-14).
Hill-Murray hit its stride in the middle period, partially due to sophomore Dylan Mills, who returned to the starting lineup after siting out the past two games due to a concussion.
“It’s great getting back with the team," Mills said. "I was fortunate to get my spot back, and my linemates helped me get back."
Reunited with Reifenberger, Mills made an impact in the second. The forward connected with his linemate on the Pioneers' third goal in the span of 5 minutes, 30 seconds as the Pioneers pushed their lead to 3-1.
Standing at 6-foot-4, Mills is a likely suspect to screen the goaltender. However, he noticed all five Royals in the slot and made the heads-up play to move to the point, where he released a low shot through the scrum.
Countless sticks slapped the leg pads of Woodbury goaltender Lucas Orf before the puck finally squeezed out and Reifenberger capitalized by sniping a shot top shelf.
“Me and Dilly have had some chemistry playing in the (Upper Midwest High School Elite League) together,” Reifenberger said. “He’s a great player, and a big factor that helps us out”
“I was hoping someone would bury,” said Mills, who tallied a goal with less than two minutes remaining in the second. “Marko’s pretty good at putting the puck in the back of the net.”
Despite his team’s ability to score in bunches, coach Bill Lechner said the Pioneers need to piece together three complete periods in the section finals against top-seeded Stillwater on Friday.
“I thought we played a little inconsistent,” Lechner said. “We spotted them one (in the third period), and you never want do that in sections playoffs and get the other team believing.”
Hill-Murray fell to the No. 2-2A Ponies 5-2 in the regular season at Aldrich Arena and has the chance to avenge the loss on Friday.
Upsets have been trend this postseason, as four of the top 5 ranked teams in Class 2A have already seen their seasons end, and the Pioneers will seek to do the same to Stillwater.
“It comes down to one game and the team that is most disciplined and works hardest - maybe a bounce here or there. But we have to play close to three periods,” Lechner said.
Reifenberger and Mills’ rekindled chemistry may provide the spark to send Hill-Murray to its fifth state tournament appearance in seven years.
“We’ve matured a lot, and we’re going to be ready for this game,” Mills said. 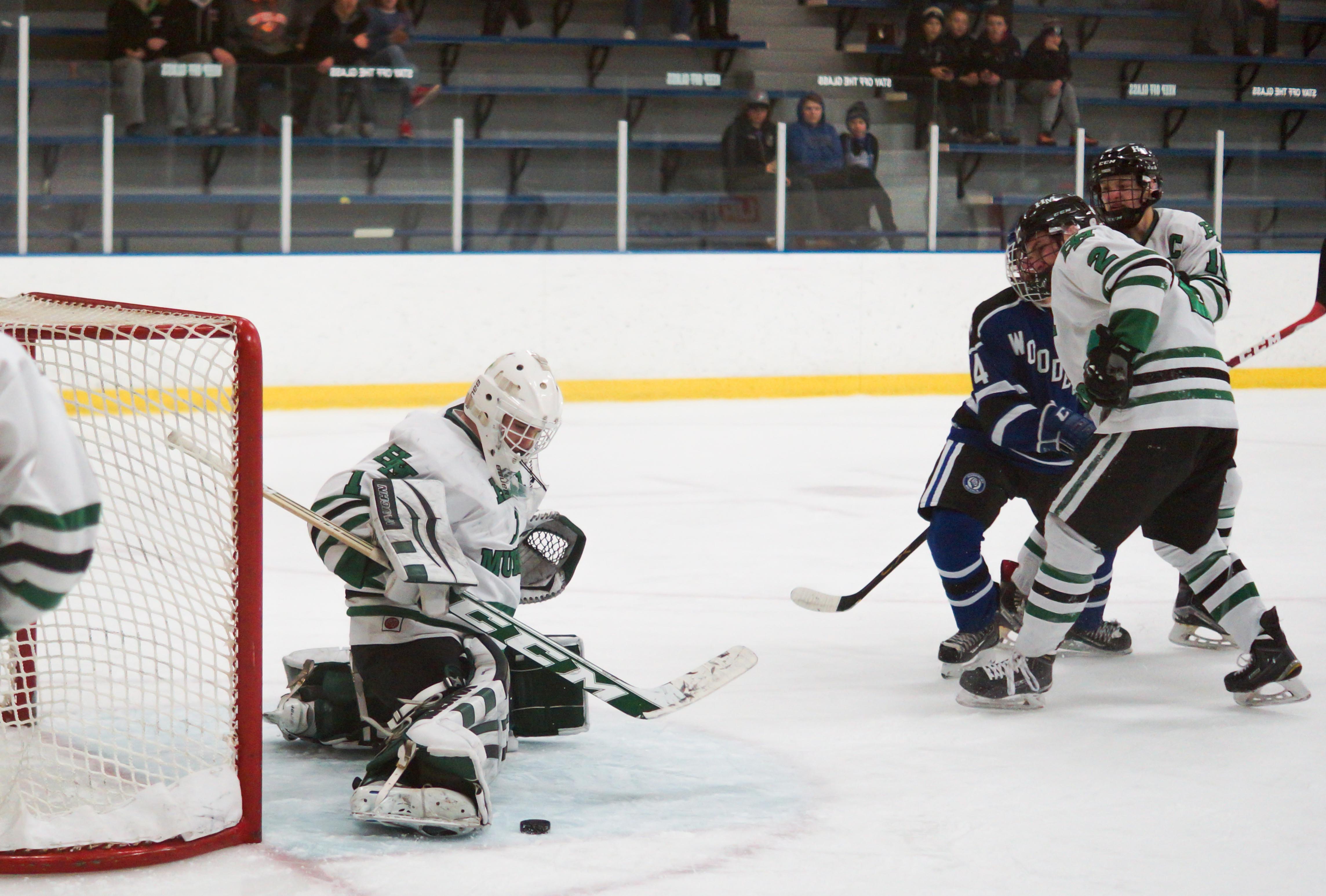 Junior Marko Reifenberger scored twice to lead second-seeded Hill-Murray to a 5-2 victory over No. 6-seeded Woodbury in the Class 2A, Section 4 semifinals Wednesday night at Aldrich Arena in Maplewood.
Ranked No. 16 in the Class 2A coaches’ poll, Hill-Murray (17-8-2) erupted for four goals in second period - including three in the span of 5 minutes, 30 seconds - to put the game away.
Adam Albright buried a rebound with less than two minutes left in the first to give Woodbury (13-14) a 1-0 lead heading into the first intermission.
Weston Neubauer netted his fourth goal of the season less than five minutes into the middle period, tying the game and jumpstarting the Pioneers offense.
Hill-Murray extended the lead when Sean Ryan rocketed a shot from the point that deflected off a Royals defender and past goaltender Lucas Orf at the 7:58 mark.
Just two minutes later, Reifenberger capped the Pioneers’ short scoring flurry after collecting the puck following a scrum in front of the net and sniping it top shelf.
Sophomore Dylan Mills put the exclamation point on the four-goal frame by tipping a shot from Ryan to the back of the Royals' net with less than two minutes to play in the period.
Reifenberger also had a shorthanded empty-netter late in the third period.
Pioneers goaltender Jake Begley made 21 saves while Orf stopped 19 shots.
Hill-Murray advances to the section championship on Friday at Aldrich, where it will face top-seeded Stillwater at 7 pm. 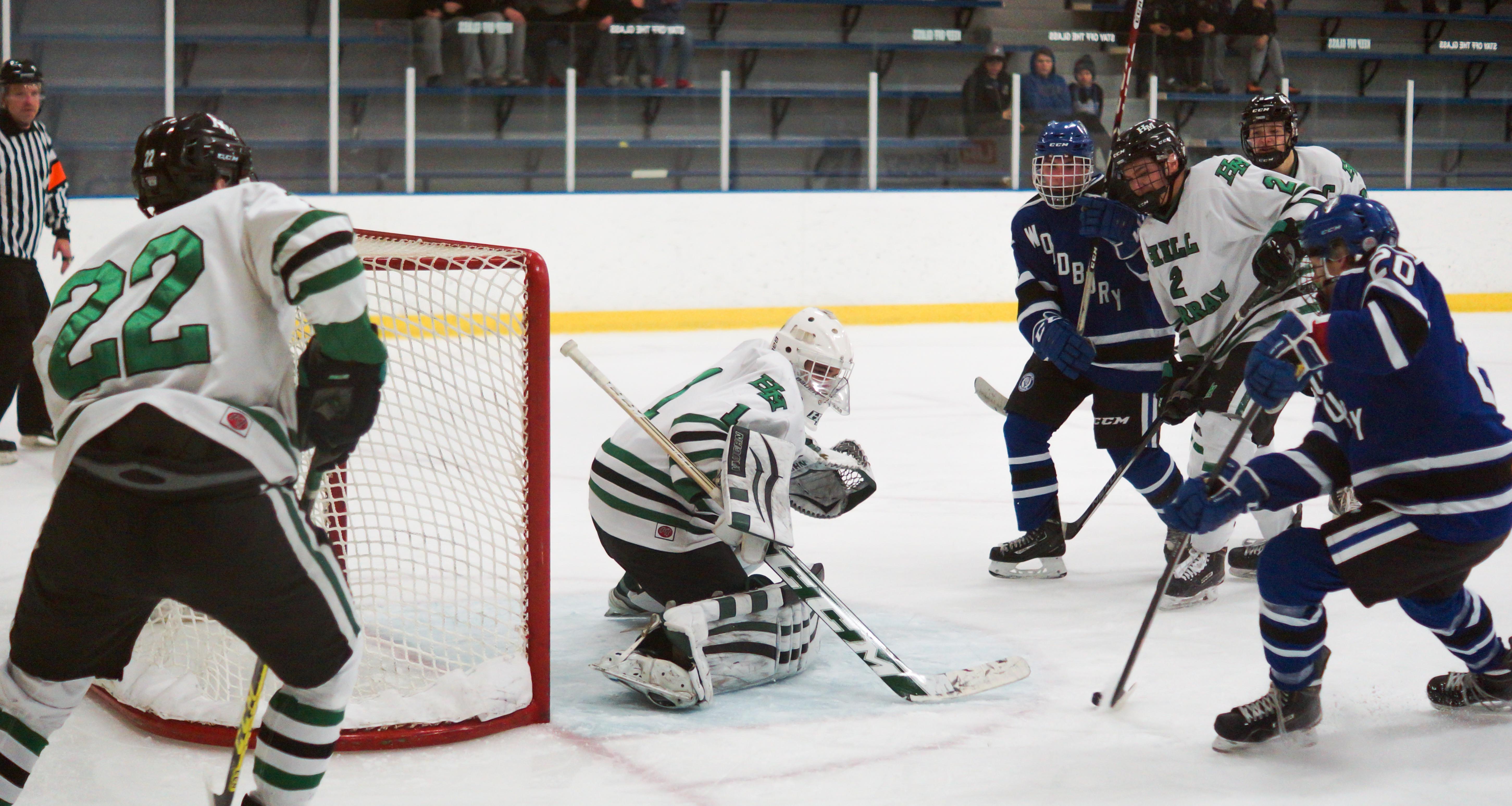 Woodbury's Adam Albright (20) scored the game's first goal. The Royals held a 1-0 lead through the first period before losing it in the second period and ultimately falling to Hill-Murray. Photo by Korey McDermott