Sorensen is as competitive as they come. Uber-aggressive. Ultra-athletic. Hits everything that moves.

His role in the No. 3-seeded Trojans’ 3-1 victory over unseeded Burnsville in the Class 2A quarterfinals on Thursday at Xcel Energy Center in St. Paul was to shut down Blaze top scorer Cade Borchardt.

Whenever Borchardt’s line was on the ice, the 6-foot, 175-pound Sorensen was sent out, too. As Wayzata (20-8-1) coach Pat O’Leary explained this strategy in the postgame media session, he got nods and knowing smirks from his players and chuckles from the press corps. But this was no joke. In fact, O’Leary didn’t even have to call Sorensen’s name.

Borchardt, who had hat tricks in all three of Burnsville’s section playoff victories, scored with 45 seconds left in the first period to put Burnsville (16-11-2) up 1-0. That was the extent of the damage.

“The defense did their job and kept them off me,” said Wayzata goaltender Alex Schilling, who was required to make just 10 saves in the final two periods.

Sorensen accounted for six of Wayzata’s 16 hits and, lo and behold, set up the Trojans’ third goal, by Dillon Riley, with an aggressive forecheck behind the Burnsville net.

“I thought, ‘Oh my goodness, what was he doing down there?’ ” O’Leary said about Sorensen straying deep down the ice.

Wayzata scored three unanswered goals in the second period as it cruised to a rough-and-tumble 3-1 victory over Burnsville on Thursday in a Class 2A quarterfinal at Xcel Energy Center in St. Paul.

Mark Senden, Luke Paterson and Dillon Riley scored for the No. 3-seeded Wayzata (20-8-1) as the Trojans rallied from a 1-0 deficit.

Riley’s goal came with 62 seconds left in the second period and was the result of heavy forechecking behind the Burnsville goal by Tyler Stevens and Hank Sorensen. Stevens made the initial crash into both a Burnsville defenseman and the boards, popping the puck free to the hard-charging Sorensen, who then fed a wide open Riley in the slot.

Senden and Paterson scored 43 seconds apart early in the second period, with both goals coming in similar fashion. Senden scored on a partial breakaway, faking a move to his forehand as he stopped just outside the crease and backhanded the puck into the net. Patterson streaked in alone on Blaze goaltender Nick Lee and fired into an empty net after a deke left Lee sprawling on the ice.

Unseeded Burnsville (16-11-2) opened the scoring with 45 seconds left in the first period on a goal by senior Cade Borchardt, his team-leading 28th of the season.

The game featured an unusually high number of hard hits into the boards, open-ice collisions, crashes into the net and most every other manner of bruising body blows. Wayzata finished with 16 hits, including six from Sorensen. Burnsville, making its first state tournament appearance since 2007, registered eight hits.

Lee finished with so saves while Wayzata goaltender Alex Schilling had 21. 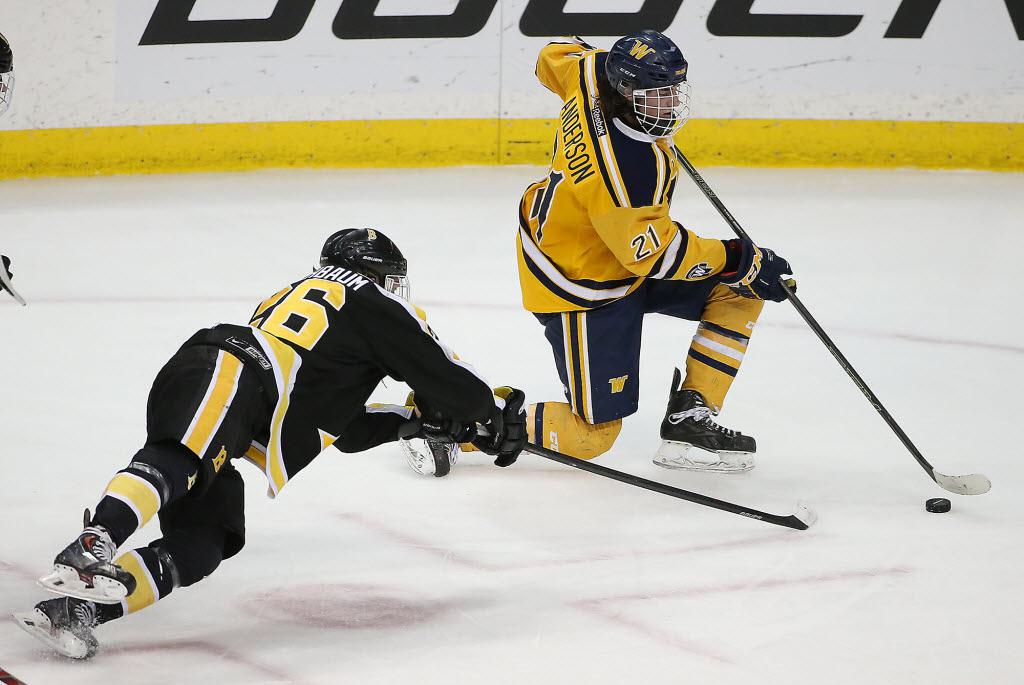