The Bengals got two goals and an assist from junior Cole Hansen en route to a 4-2 victory in the first Class 2A quarterfinal. 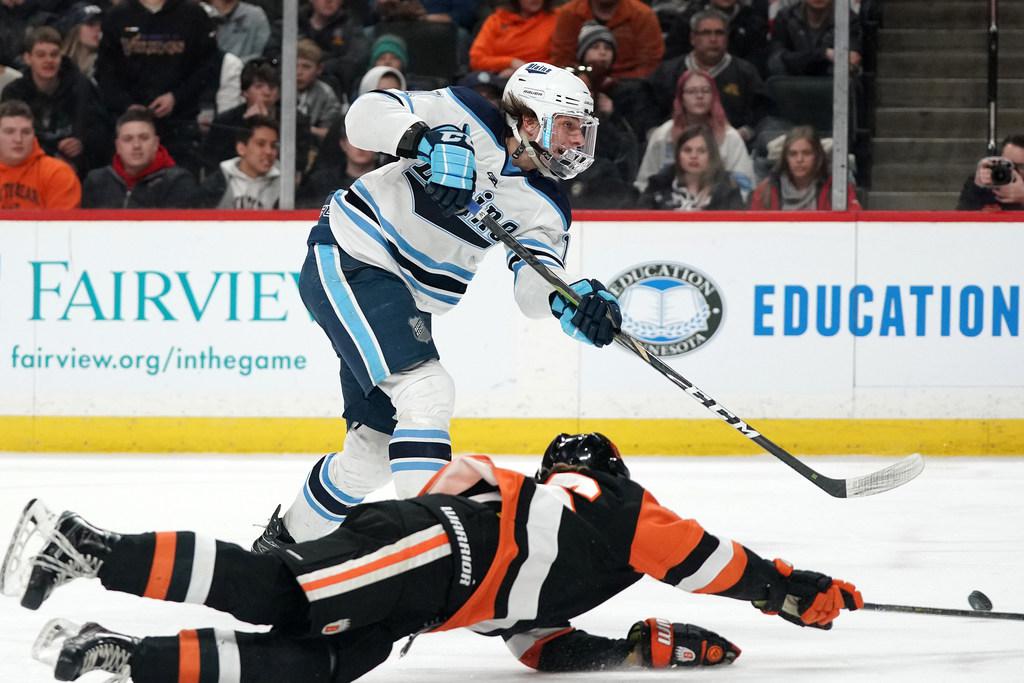 Cole Hansen, once a promising youth player oozing with potential, finished his sophomore season on Blaine’s fourth line. His stats were meager, to put it gently. One goal and one assist.

“I went into the offseason thinking about that,” Hansen said. “I told myself that’s not going to happen again.”

Endless summer weightlifting and puck shooting sessions helped elevate Hansen’s game, and the junior forward’s rise to relevance reached a new level Thursday as he scored two goals and added an assist in No. 2 seed Blaine’s 4-2 triumph over unseeded White Bear Lake in the Class 2A quarterfinals at Xcel Energy Center.

“It’s not a surprise to us,” said Blaine junior Carsen Richels of Hansen’s spectacular play. “He does it all the time in practice. He’s a goal scorer, and he’s earned them.”

Hansen and linemates Richels and Mr. Hockey award finalist Bryce Brodzinski scored all four Bengals goals. The fourth, a Richels shot off a Hansen feed through the slot, put Blaine (23-2-2) ahead 4-0 early in the second period.

“Let me tell ya, they move, they are big, they’re strong,” White Bear Lake coach Tim Sager said of the Bengals’ top line.

The loss extended the Bears’ state quarterfinal losing streak to 19 in as many appearances.

“I think we all got scared of the bright lights, all the people,” said Sam Newpower, whose second-period goal pulled White Bear Lake (21-5-1) to within 4-2.

Junior forward Cole Hansen scored twice and added an assist as No. 2 seed Blaine raced to an early four-goal lead, then hung on to defeat unseeded White Bear Lake 4-2 in Thursday’s opening Class 2A quarterfinal.

Mr. Hockey Award finalist Bryce Brodzinski of Blaine (23-2-2), the state’s scoring leader with 85 points, opened the scoring on a quick wrist shot, using a Bears defenseman as a screen, in the first period.

Then Hansen took over, scoring twice and setting up Carsen Richels’ second-period goal to put the No. 2-ranked Bengals ahead 4-0 early in the second period.

No. 7-ranked White Bear Lake (21-5-1) rallied in the second period behind goals from Grant Hofeld and Samuel Newpower. The Bears have lost all 19 of their state tournament quarterfinal appearances.