Bryce Brodzinski, the youngest of four brothers, makes the No. 2 seed Bengals a team to contend with. 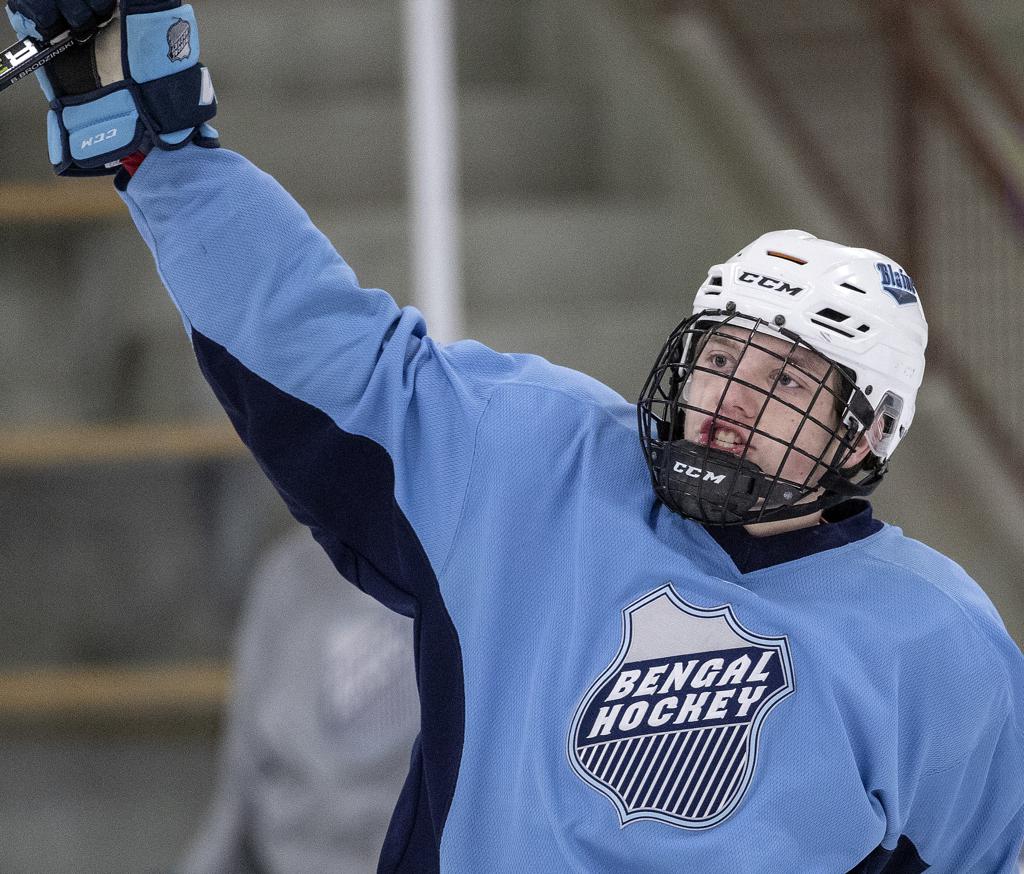 Mike and Kathy Brodzinski thought their early November plan was simple: drive to Nebraska, where the youngest of their four gifted sons played in the U.S. Hockey League, and get him back to Blaine for the high school season.

They spotted a young man in shorts, his back to them, and couldn’t immediately recognize his larger, more muscular frame.

Bryce Brodzinski has been the Bengals’ leading man this season, tallying 35 goals and team-bests in assists (49) and points (84). Coaches consider Brodzinski, a Mr. Hockey Award finalist who has committed to the Gophers, to be the top forward in the metro area.

He has yet to be kept off the score sheet this season and leads second-seeded Blaine into the Class 2A state tournament quarterfinals against White Bear Lake on Thursday.

His consistent scoring owes to challenging summer workouts with accomplished older brothers Jonny, Michael and Easton. He maintained his commitment to strength and conditioning while playing in the fall with the Omaha Lancers and added about 12 pounds of muscle.

Mike said his youngest son is 6-1, 205 pounds and “defensemen can’t handle his strength.”

Brodzinski centers an explosive top line that includes Carsen Richels (39 goals, 38 assists) to his left and Cole Hansen (12-37) to his right.

Brodzinski and Richels played about 10 games on the same line at the end of last season and remained together. Hansen joined them this season.

“No line works well if the guys don’t like each other, but we’re brothers and that helps a lot,” Brodzinski said.

Throughout his life, Brodzinski’s biological brothers played a big role in his success. Jonny, a 2011 high school graduate, and Michael, 2013, starred at Blaine and then played college hockey — Jonny at St. Cloud State, Michael at Minnesota. Jonny plays for the NHL’s L.A. Kings. Michael is a San Jose Sharks prospect. Easton, a 2015 Blaine graduate, is a sophomore forward at St. Cloud State.

All three played in at least one Class 2A state tournament. When it came to competition, baby brother Bryce grew up fast.

“When my brothers told me that they were better than me at something, I would work super hard at it when they weren’t looking,” Brodzinski said. “We have a ping-pong table and I could barely play when I was 8 years old. But I would fold the table halfway up and play by myself for hours at a time until they got home from hockey, and then I’d whoop up on them.”

Chris Carroll worked with all the Brodzinskis, running the summer strength and conditioning program when Jonny and Michael played at Blaine and later becoming coach during Easton’s senior year.

“When Bryce was coming in, his dad told me, ‘He’s a people pleaser. If you ask him to do something, he’s going to do it,’ ” Carroll said.

Said Brodzinski, “Frankly, I really didn’t believe him because I wasn’t even in the top 10 for points last year. But he gave me confidence every day to play my best.”

Once again, his brothers provided a push during summer workouts.

“It’s a different level that they’re at,” Brodzinski said. “They are crazy fast and strong.”

But baby brother caught up and even passed one.

“I outsquatted my brother Easton one time,” Brodzinski said. “… It was one of the best moments of my entire summer.”