Edina's top guns use their speed, hit their marks in 4-2 victory over Moorhead

The Hornets' Jett Jungels, Mason Nevers and Liam Malmquist each scored and goaltender Louden Hogg made 20 saves and came up big at the end. 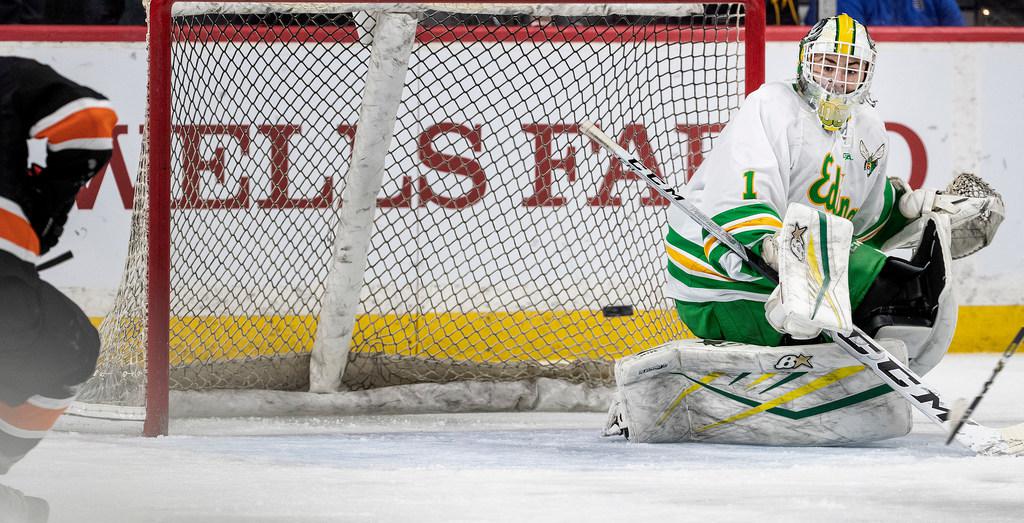 Determining Edina’s fastest player is an exercise in futility.

“We’re all fast,” Jungels said Thursday after the No. 1-seeded and top-ranked Hornets outlasted unseeded Moorhead 4-2 in a state Class 2A quarterfinal.

The Spuds won’t argue. They fell behind 1-0 in a blink of an eye, as Jungels — yet another speed demon — opened the scoring 57 seconds into the first period on a burst to the net. Nevers made it 2-0 by the end of the first period, again exploiting Edina’s edge in speed.

When Moorhead players weren’t grasping at air, they were clutching, grabbing and using any other means necessary to apply the brakes to Edina (25-2-1). The Spuds (21-7-1) took five penalties to the Hornets’ two.

“What led to the penalties? Their guys are really fast,” Moorhead coach Jon Ammerman said. “And we tried to slow them down. Sometimes within the rules. I don’t know what to tell you.”

Malmquist’s 24th goal of the season gave Edina a 3-1 cushion early in the third. Moorhead’s Nolan Westra scored to make it 3-2 in the closing minutes. An empty net goal by Kevin Delaney clinched the victory.

Edina top guns Jett Jungels, Mason Nevers and Liam Malmquist each scored as the No. 1-seeded and top-ranked Hornets got sizzling performances from all of its top players in a 4-2 triumph over unseeded and unranked Moorhead on Thursday’ in the Class 2A quarterfinals.

Moorhead’s Cullen Gess cut the Hornets’ lead to 2-1 less than 2 minutes into the second period, but Malmquist’s goal (his 24th of the season) less than four minutes later put Edina (25-2-1) in control most of the rest of the game.

Moorhead’s Nolan Westra goal with 3:07 left injected one last shot of energy into the Spuds and the partisan Moorhead crowd. Edina goaltender Louden Hogg made a diving, face-first save at the right corner of the crease with less than 2 minutes left before teammate Kevin Delaney scored into an open net with 28.7 seconds left to secure the victory.