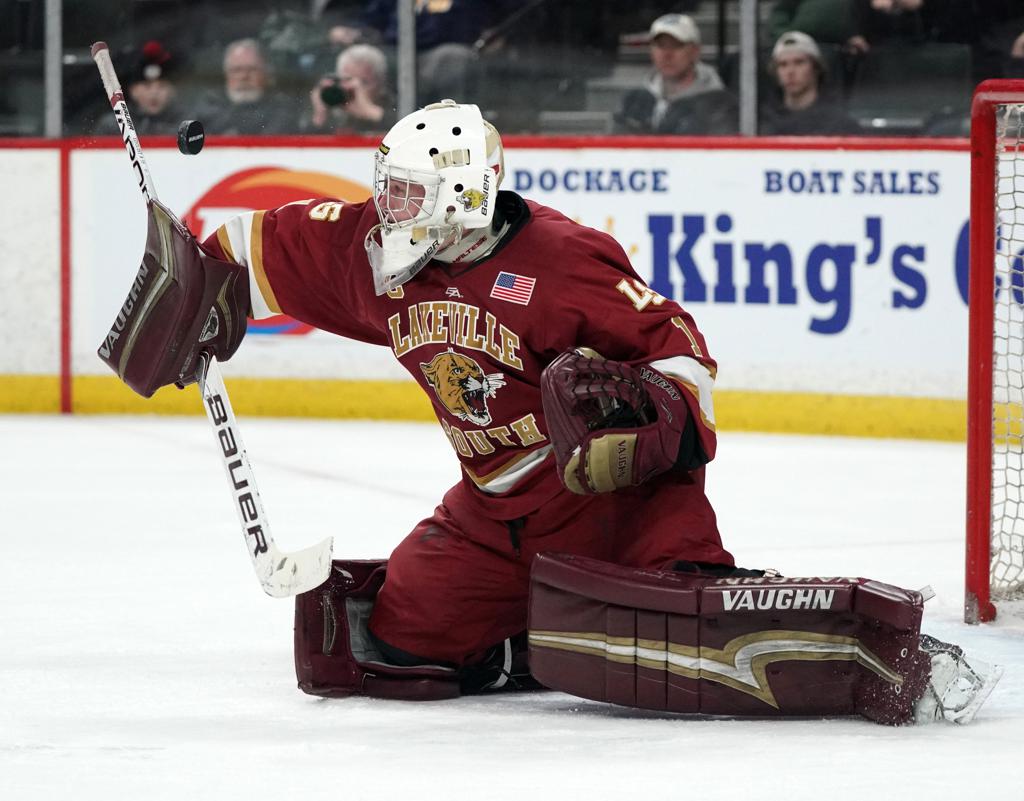 Lakeville South goaltender Henry Welsch (1) made a save in the second period against Eden Prairie. Photo: ANTHONY SOUFFLE * anthony.souffle@startribune.com

Lakeville South senior goalie Henry Welsch followed that sounds-simple-enough formula time after time after time on Thursday in a Class 2A quarterfinals against Eden Prairie.

A near-record 63 times in all.

“It comes to a point where you are not really thinking, just playing,” said Welsch, whose brilliance allowed unseeded Lakeville South to push Eden Prairie to three overtimes before losing 3-2.

Welsch’s 63 saves were two short of the state-tournament record of 65 by Apple Valley’s Karl Goehring against Duluth East in 1996 in a five-overtime semifinal.

Eden Prairie’s Jack Jensen scored the winner on a hard wrister from 15 feet out in the slot. The shot sailed through traffic in front and into the right side of the net, just inside the goalpost.

Added Eden Prairie coach Lee Smith: “Thank goodness we had some traffic there where Jack got that one at the end.”

“With these guys, that’s past history,” White Bear Lake coach Tim Sager said. “… At some point we’ll break through and win the quarterfinal.”

Chaska senior Mike Koster was named the winner of the Reed Larson Award that goes to Minnesota’s top senior defenseman.

A Ch. 45 anchor apologized Thursday on behalf of the station after a prominent sports analyst inexplicably referred to “lynching ropes” while calling the game between White Bear Lake and Blaine.

Doug McLeod, the University of Minnesota play-by-play announcer at Fox Sports North, was invited back to the 75th annual tournament with a group of fellow broadcasting veterans.

During the second period, McLeod made an off-handed comment shortly after a Blaine goal: “All the White Bear fans get out the lynching ropes.”

The statement appeared to go unnoticed by his broadcasting partner — there’s a six-second video clip posted on Twitter.

But some hockey fans expressed outrage by his choice of words on social media. McLeod was ultimately pulled off the air.

Sock it to me

Edina’s Jett Jungels brings a little footwear flair to the locker room in the form of socks varying in color and pattern. Though Thursday’s look was more conservative.

“Just a blue pair, with some white in there, nothing out of this world,” Jungels said.

Friday’s choice will be a little more ambitious.

“I’ve got something set up, probably the Minneapolis skyline,” said Jungels, a Mr. Hockey Award finalist.

He wore the blue and white socks before the Section 6 final last week and scored a goal. So superstition dictated he wear them again. And he scored again, 57 seconds into the Moorhead game.

Al Richels, a senior forward on the Bengals’ first state tournament team in 1992, tallied a goal that brought years of bragging rights.

That ended when Carsen buried his 40th goal of the season during Blaine’s 4-2 victory.

“Yeah, he can’t hold that one over me anymore,” Richels joked. “Feels good.”

Overshadowed at times by center Bryce Brodzinski, a Mr. Hockey Award finalist, Richels is a talented 6-2, 200-pound wing with 40 goals and 40 assists this season.