Eden Prairie roars back to defeat No. 2 seed Blaine

The Eagles, seeded third, trailed 2-0 in the first period before finding the net with four second-period goals and then held on for a 4-3 victory. 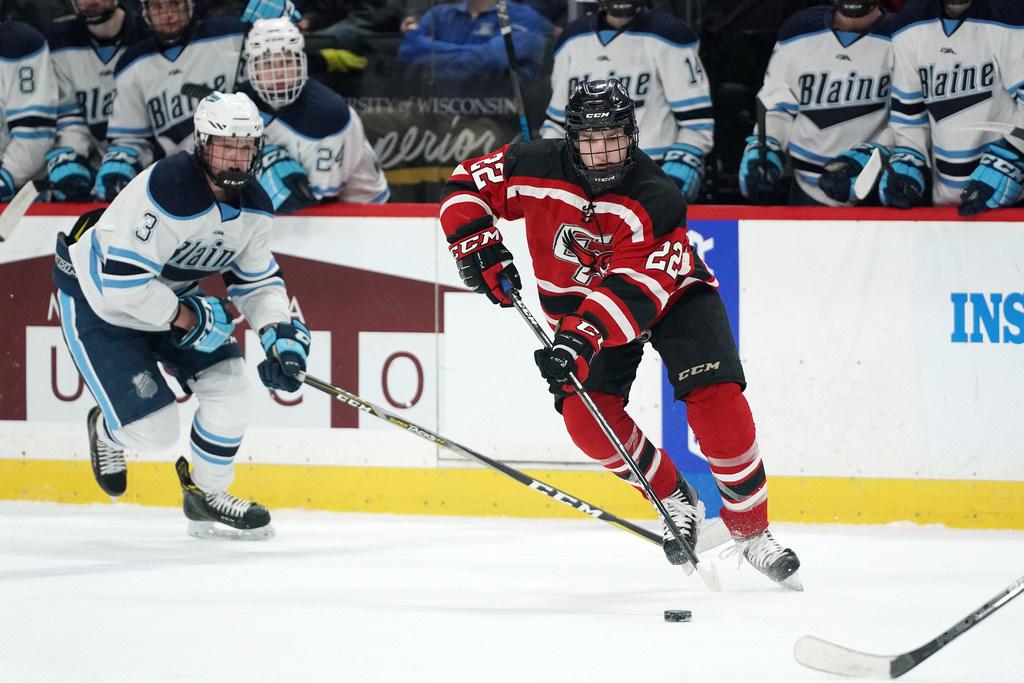 The power-play goals were great. The penalty killing? Even better.

Superstar forward Jack Jensen was held off the score sheet, but special teams propelled Eden Prairie to a 4-3 triumph over Blaine on Friday night in the Class 2A hockey semifinals at Xcel Energy Center.

Three of the Eagles’ four second-period goals came on power plays, but a couple of key penalty kills in the middle period against one of the most potent forward units in the state were also crucial in allowing Eden Prairie to rally from a 2-0 deficit that period.

Facing Mr. Hockey finalist Bryce Brodzinski and his high-scoring sidekick Carsen Richels, Eden Prairie appeared on the verge of going down 3-0 when, with Blaine (23-3-2) on a power play, it drew a cross-checking call on Bengals forward Will Hillman.  Defenseman Keegan Langefels scored on the ensuing Eagles power play, the first of four unanswered goals i n the second period.

“We just worked it down low first, and then we just popped it back out and shot it to the net,” Langefels said. “They were screens, and it just went in.”

“That might have determined the outcome of the game,” Eden Prairie coach Lee Smith said. “It was 3-2 us, and we killed that off. Did we get a power play right after that?”

Yes. Back on the power play, the Eagles got a goal from third-line wing Carson Jones to take a 4-2 lead with 34 seconds left in the second period. The goal was Jones’ second of the season.

“We put our second power play out there, and we have a bunch of tremendous hockey players on that unit,” Smith said.

Blaine’s power play clicks at an absurdly high 40-­percent rate. Its penalty kill is successful about 92 percent of the time. Bengals coach Chris Carroll said he would have been comfortable with the thought of matching his best up against the Eagles’ top guns all night in a parade of power plays and penalty kills.

“I wasn’t expecting a special teams battle,” he said. “But if you would have told me it would be, it would have been all right.”

Three of Blaine’s second-period penalties were for cross-checking.

“We took too many penalties in the second period,” Brodzinski said. “They scored three goals on the power play, and that really killed us.”

Eden Prairie scored four unanswered goals in the second period -- three of them on the power play  -- as it rallied to upend Blaine 4-3 on Friday in the Class 2A semifinals.

No. 2 seed Blaine (23-3-2) led 2-0 to start the second period after getting goals from junior Cole Hansen — his third and fourth of the tournament.

Senior defenseman Keegan Langefels started the comeback for the Eagles (19-9-2) with a power-play goal 6:08 into the second period. Senior forward Garrett Smith scored just 25 seconds later as he was sliding face first on the ice toward the goal. The goal was just the fifth of the season for Smith, a third-line wing and Eagles’ coach Lee Smith’s son.

Blaine’s Carsen Richels scored with 2:39 left to pull the Bengals to within 4-3.