Jackson Savoie scored twice to help the Crusaders, playing before a decidedly pro-Raiders crowd, to a 5-2 victory and the first Class 1A hockey title for a St. Cloud-area team. 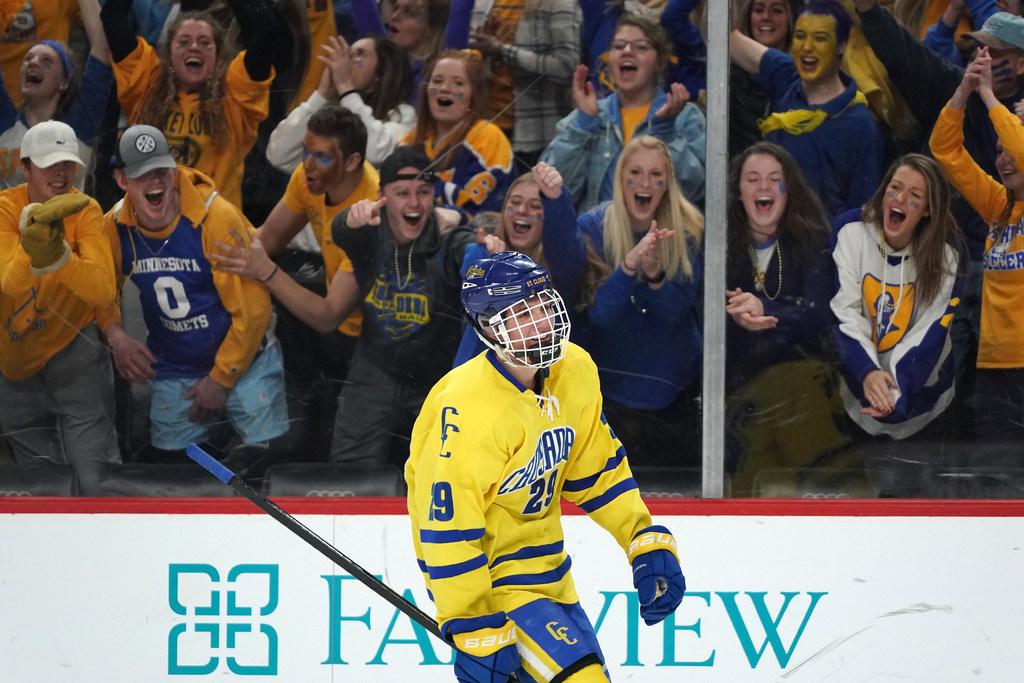 The final buzzer sounded, and a kid in the crowd going bonkers cleverly modified his handmade sign. The upper left corner with the letters UN were ripped off and discarded.

St. Cloud Cathedral’s “Unfinished Business” motto became a season-long rallying cry for players and fans alike, ever since Crusaders coach Derrick Brown made an off-the-cuff remark using those words a year ago at the team’s season-ending banquet.

“That was kind of the key to our whole year,” junior forward Nate Warner said Saturday after the Crusaders’ 5-2 triumph over state tournament darling Greenway/Nashwauk-Keewatin in the Class 1A championship. “It was one of those things that just brought everybody together, and everyone rallied around it.”

St. Cloud Cathedral’s first title in nine state tournament appearances also was the first for any team from St. Cloud and all of central Minnesota. It cleansed the bitter taste of last season’s double-overtime section final loss to Alexandria.

“We said at the beginning of the year that we had unfinished business, and today we trashed the briefcase because we finished the business,” Brown said of the unusual award given all season to the Crusaders’ player of the game.

Second-period goals from Jackson Savoie and Jack Smith broke a 2-2 tie and put the No. 2 seed Crusaders (27-4) in control. But it was a successful kill of a 5-minute major penalty that swung the game fully in Cathedral’s favor.

No. 4 seed Greenway (17-14-0), playing mostly a skeleton crew of 10 players for the third consecutive day, appeared spent after failing to score on the extended second-period power play.

“Their goalie (Noah Amundson) made a lot of big saves, especially on that five-minute power play,” Greenway senior Donte Lawson said. “When they weren’t going our way, I guess we kind of got down.”

Smith’s power play goal late in the second period put St. Cloud Cathedral up 4-2 and silenced all but the Crusaders’ sliver of a cheering section in an otherwise pro-Greenway crowd of 8,141.

Smith said he embraced the Crusaders’ role as villains.
“When everybody is cheering against you, and you score a big goal, the whole rink goes quiet,” Smith said. “I kind of like that.”

Players had their fun destroying their symbol of solidarity, too.

“Everyone was tossing it on the ground, beating it up,” Smith said of the briefcase. “I don’t know if there is much left of it.”

THREE STARS OF THE GAME

The 6-2 speedster extended his torrid tournament scoring pace, notching two goals — including the game-winner — to give him four for the tournament and 22 this season.

The Crusaders were outshot for the second consecutive game, but Amundson was his usual razor-sharp self, making 27 saves.

Scored a backbreaker late in the second period, rifling a shot high into the net to give the Crusaders a two-goal cushion. He also assisted on Nate Warner’s empty-netter.

Senior forward Donte Lawson opened the scoring for Greenway (17-14-0) 2:20 into the first, but the Crusaders answered with goals by Luke Schmidt and Savoie to pull ahead 2-1. Greenway’s Cameron Lantz tied it at 2 with his power-play blast from the point with 2:55 left in the opening stanza.

Crusaders junior Nate Warner, who has verbally committed to Minnesota, added an empty net goal with 42.6 seconds left in the third.

St. Cloud Cathedral was ranked No. 2 in the final state Class 1A coaches poll. Greenway, which knocked off No. 1 seed Mahtomedi in overtime in the semifinals, was ranked No. 7. The Crusaders defeated the Raiders 5-3 in the regular season.