Edina turns it on late, defeats Eden Prairie in overtime

Unheralded Peter Colby scored his second goal of the game to give the top-seeded Hornets a 3-2 victory and the program's 13th hockey state championship. 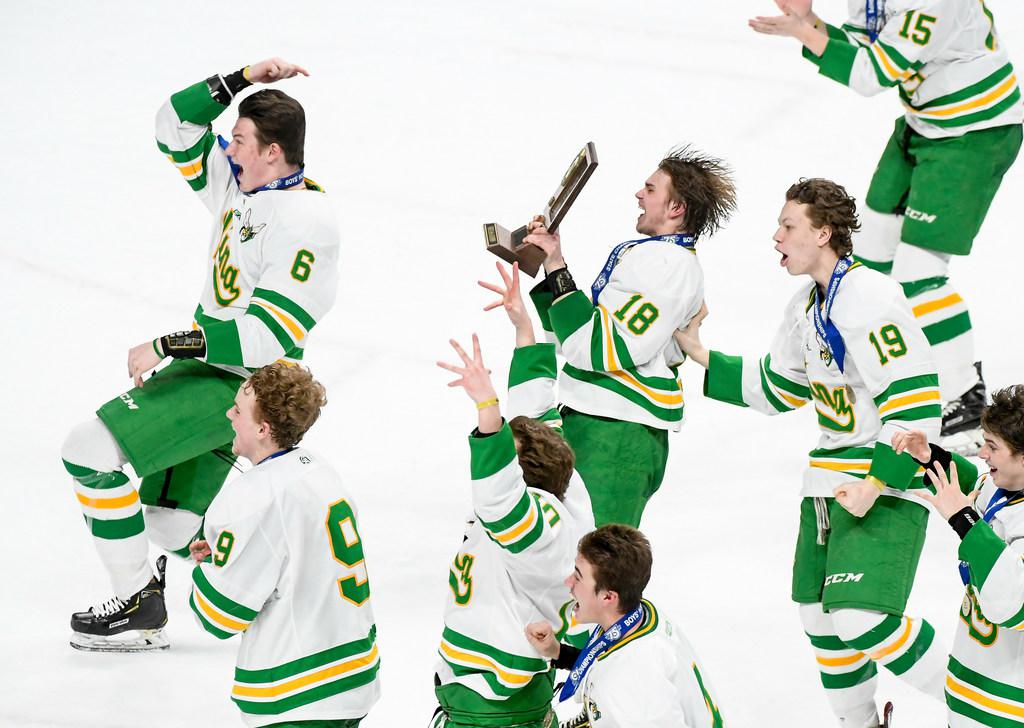 Loud words from senior leaders snapped the Edina boys’ hockey team into focus after two flat periods of play in the Class 2A state championship game.

Senior wing Peter Colby also heard from team manager Jack Goetzmann, quiet encouragement that Colby would be the one to come through.

Colby scored his eighth and ninth goals of the season, the second coming 2 minutes, 31 seconds into the fourth period.

His efforts capped a night when none of the three Mr. Hockey Award finalists on the ice were trophy goal scorers and unlikely stars took turns lifting their teams.

Goals for top-seeded Edina (27-2-1) came not off the sticks of seniors Jett Jungels and Mason Nevers but from its second and third lines. No. 3 seed Eden Prairie (19-10-2) got offense courtesy of a sophomore and a member of its third defenseman pair rather than senior Jack Jensen.

Snow, worry of tougher driving conditions and even some apathy perhaps toward a fourth meeting of two familiar high school athletics superpowers left large chunks of arena seats vacated. The hustling and hard-hitting hockey on the ice was worthy of a full house.

Saturday provided a solid fourth chapter considering the scores of Edina’s victories in the Lake Conference rivals’ previous three meetings this season: 6-1, 5-2 and 7-2.

“During the first three games we were kind of scared of them,” Eden Prairie senior defenseman Clayton Shultz said. “Tonight, we realized we can do it.”

Sophomore Drew Holt’s power-play goal put the Eagles up 1-0 a little more than five minutes in. From there, Eden Prairie’s aggressive-yet-disciplined style gave Edina forwards little time or space to get free.

“We played two pretty much flawless periods,” Eden Prairie coach Lee Smith said. “The only thing that didn’t happen for us was to put that second one home when we had all those chances.”

Hogg, who transferred from Wyoming, made 33 saves and got help in the third period. First, Kevin Delaney, the left wing on the second line, tied the score with his 20th goal of the season. Then Colby put Edina ahead 2-1 only 22 seconds later.

Shultz, part of Eden Prairie’s third defensive pairing, tied the score with 7:17 left in regulation. But Colby scored in OT on a great pass from Jungels. Then Colby emulated his NHL hero Patrick Kane’s “heartbreaker” celebration, busting his arms wide from his chest as he slid on his knees.

“We got in the locker room after the second period and said, ‘We’re not going to let this slip away,’ ” Colby said. “I was in the right place at the right time.”

Edina, Minnesota’s most decorated boys’ hockey program, celebrated the 50th anniversary of its inaugural state championship with another title.

The Hornets edged Eden Prairie 3-2 in overtime for their 13th state championship. No program in 75 years of state tournament play comes close.

Senior wing Peter Colby tallied his eighth and ninth goals of the season, the first to tie the game, the second to win it at 2:31 of the fourth period Saturday at Xcel Energy Center.

"I have no words,'' Colby said after describing his game-winner. "It's unbelievable.''

Colby’s efforts capped a night on which all three Mr. Hockey Award finalists on the ice were locked out of their usual roles as trophy goal scorers, forcing unlikely stars to take turns lifting their teams.

Goals for No. 1 seed Edina (27-2-1) came not off the sticks of Jett Jungels and Mason Nevers but from its second and third lines. No. 3 seed Eden Prairie (19-10-2) got offense courtesy of a sophomore and a member of its third defensemen pair rather than Jack Jensen.

Snow, the threat of slow roads and even some apathy toward a fourth meeting of high school athletics superpowers kept large chunks of seats vacated. The hustling and hard-hitting hockey on the ice deserved a full house.

A first-period Edina penalty for too many players on the ice seemed ironic based on the Hornets’ performance the previous night. They danced and darted to a 3-0 lead against St. Thomas Academy players that must have felt like they were seeing double.

Meanwhile, Eden Prairie capitalized on its power play for a second consecutive game. Sophomore Drew Holt’s blast traveled from just above the left circle to the upper corner of the net. The Eagles led 1-0 at 5:35.

From there, Eden Prairie’s defensive discipline shined. Edina managed just five shots on goal after one period as their forwards saw little time of space to get free or create. The Eagles did the same to Blaine’s top line Friday.

Rather than sit back and defend, however, Eden Prairie pushed. Sophomore Carter Batchelder blasted a puck off the post on a shorthanded rush in the second period. The Eagles outshot Edina 26-7 through two periods. But goaltender Louden Hogg, who stopped shots from every angle and absorbed a collision with Carson Jones, kept Edina close through two periods.

His teammates returned the favor in the third period. First, Kevin Delaney, the left wing on the second line who took the back roads through Edina’s youth system, evened the score with his 20th goal of the season.

Edina’s lead disappeared as Clayton Shultz, part of Eden Prairie’s third defensive pairing, smacked a loose puck in the crease past Hogg. Both of Shultz’s goals this season came in the state tournament.

THREE STARS OF THE GAME

1. Peter Colby, Edina, senior
The third-liner scored twice, including the OT winner, much to the delight of the Edina student section, which chanted, “Thank you, Peter! Thank you, Peter!”

2. Kevin Delaney, Edina, senior
Completed his rise from youth-level obscurity to varsity superstar by scoring a goal and setting up another, both coming in third-period crunch time.

Withstood both a barrage of Eden Prairie shots — 33 in all — and hard-charging Eagles net-crashers to earn the victory, his 22nd of the season. 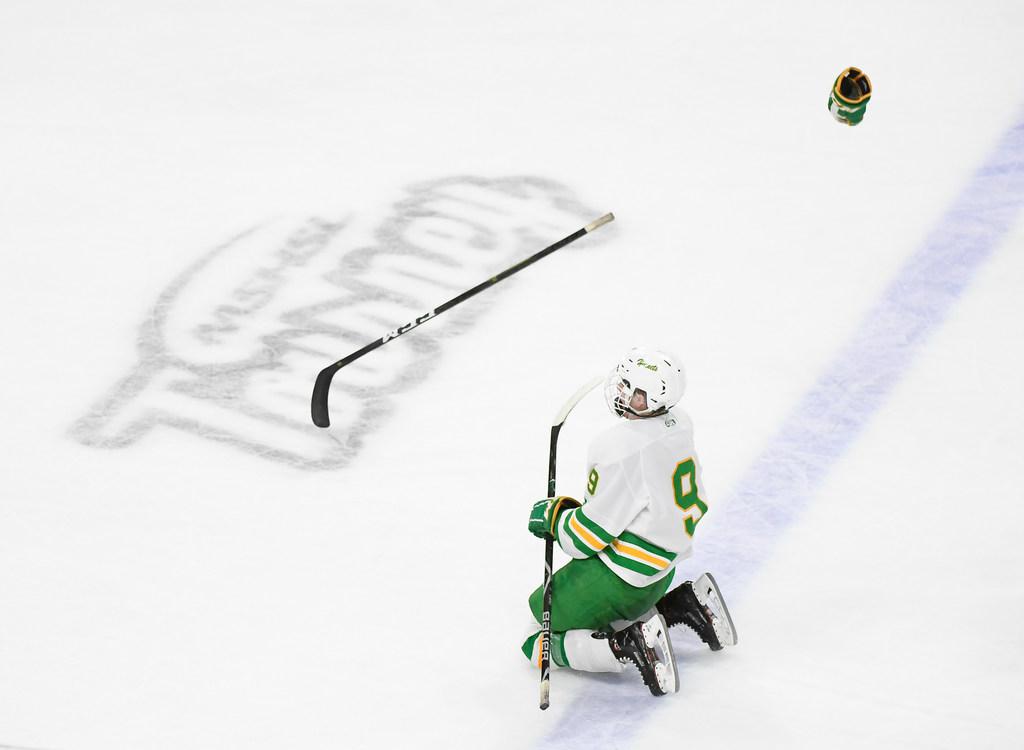