Edina's Kevin Delaney, once a B-level player as a youth, showed his big-time skills in the title game

The 5-9, 155-pound forward flashed his varsity bona fides on the ultimate of stages Saturday, scoring a goal in the third period and then adding an assist to help the Hornets rally past Eden Prairie. 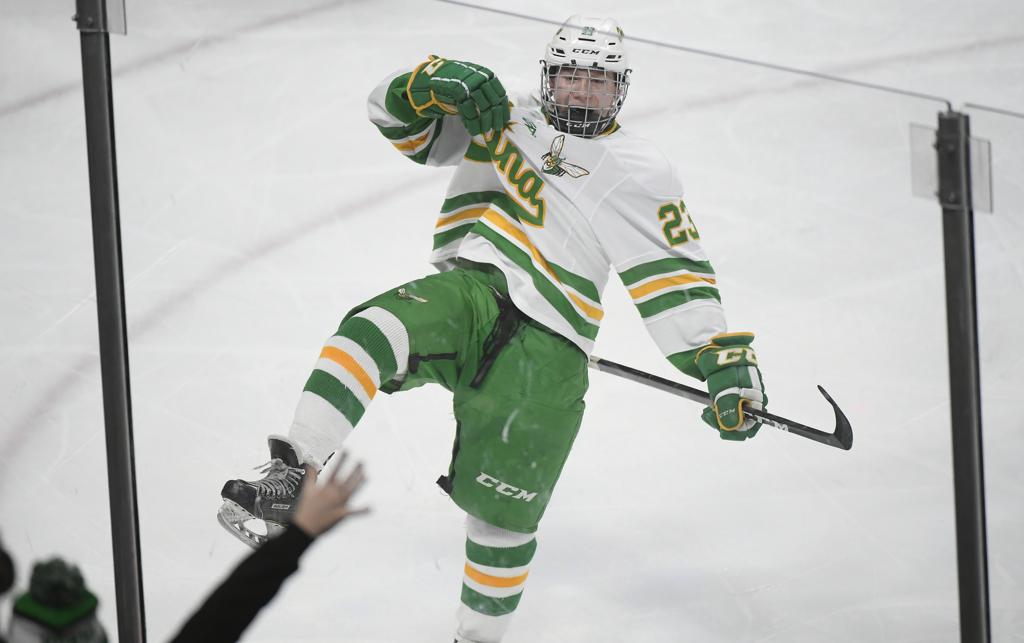 Even Delaney, who played at the Junior Gold B level as a freshman, at times wondered if he was varsity material.

“I can’t lie,” the senior forward said. “It has popped into my head a little bit.”

There’s no doubting Delaney’s abilities now. The 5-9, 155-pound forward flashed his varsity bona fides on the ultimate of stages Saturday, scoring a goal in the third period and then adding an assist to help the Hornets rally past Eden Prairie 3-2 in overtime in the Class 2A state championship game.

Delaney’s goal, which tied the score 1-1, came after he stripped the puck from an Eden Prairie defender, raced to the slot and fired a shot past Eden Prairie goalie Axel Rosenlund’s catching glove.

“There’s nothing like it, scoring in the state championship game,” Delaney said. “Just seeing all my buddies hug me and stuff, that’s great.”

Delaney’s tenacious forechecking set up Edina’s second goal just 22 seconds later. He whacked the puck off an Eden Prairie defender’s stick, sending it to linemate Brett Chorske in the corner. Chorske fed Peter Colby, who ripped a shot from the slot to put Edina up 2-1.

“Kevin has always been a real good player, a hardworking player,” Edina coach Curt Giles said. “He has just come into his own this season.”

Delaney played two years of Pee Wee hockey and one of Bantam at the B2 level. As a second-year Bantam he made the jump to B1. With so many players ahead of him at the A and AA levels, Delaney’s ascension to state tournament hero is nothing short of remarkable.

“The path, I wouldn’t have chosen it any different,” said Delaney, who finished the season with 20 goals and 15 assists on the Hornets’ second line.

“When I eventually made the team last fall, the boys accepted me in,” Delaney said. “They were 100 percent supportive, all of them. That was cool.”