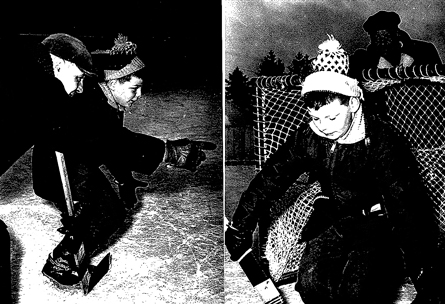 Above: Pete LoPresti received instruction from his father Sam, an NHL goalie for two seasons. Below: Minnesota North Stars goalie Pete LoPresti, left, with father Sam after Pete signed a multi-year contract with the team in 1974. 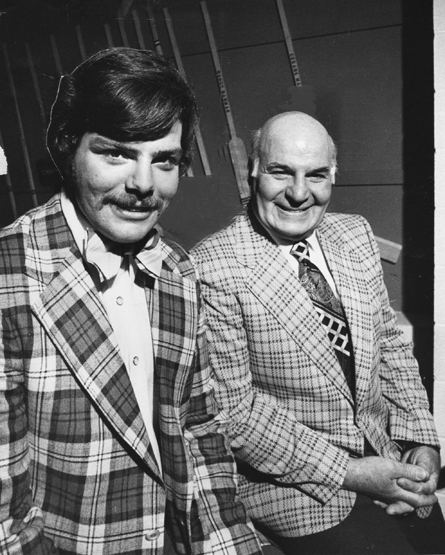 Pete LoPresti was five, maybe six, and already dead set on being a goaltender.

LoPresti was growing up in Eveleth, the hockey-crazed town that produced some of the state’s greatest talent in the early years of organized hockey. Like most every other kid living on the Iron Range in the 1960s and ’70s, LoPresti dreamed of someday tugging on his high school team’s jersey.

“As a kid, you walk into the Hippodrome and see pictures of all these great goalies and you think some of this stuff is so far fetched that you’ll never get a chance to play high school hockey, much less go farther than that,” LoPresti said. “That was a big, big deal to play for the Eveleth High School team.”

Goaltender was the marquee position in Eveleth. Long before the arrival of state high school league-sanctioned hockey, Eveleth was producing NHL-caliber goalies. 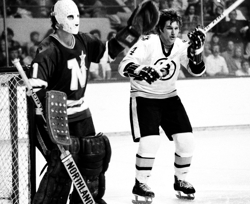 Eveleth’s Mike Karakas tended goal for the Chicago Blackhawks for eight seasons starting in 1935. Frank Brimsek joined the Boston Bruins in 1938 and was an instant success, earning the nickname “Mr. Zero.” He was inducted into the NHL Hall of Fame in 1966.

Sam LoPresti, Pete’s father, was the third early era Eveleth goaltender to reach the NHL. Sam played for the Blackhawks for two seasons from 1940-42. He left the NHL after the 1941-42 season to serve in World War II and never played pro hockey again.

While Pete LoPresti was insistent he was going to be a goaltender, Sam wasn’t quite as convinced.

Father and son reached an agreement. Sam said he would buy Pete a set of the best goaltending equipment, but only with an assurance from Pete that he wouldn’t change his mind in a week or two and switch to another position.

As a junior in 1971, LoPresti’s Eveleth team lost to International Falls 5-3 in the Region 7 finals. The Golden Bears had one more chance to reach state, as they played Region 8 runner-up East Grand Forks for the Region 3 title and the old “back door” state tournament berth.

“It was one of those deals where if we would have played East Grand Forks 10 times we probably beat them nine,” LoPresti said. “To this day I tell them, ‘I started you guys off on your road to high school success.’ ”

In 1972 LoPresti and the Golden Bears lost 5-3 to Grand Rapids in the Region 7 semifinals.

“High school hockey was the thing up there when we were playing in the 1970s,” LoPresti said. “That was a Friday or Saturday night. It was phenomenal when you look back on it, everything kind of stopped.

“People lived and died this stuff.”

Despite never reaching the state tournament, LoPresti developed a reputation as one of the state’s top goaltenders.

“He was an excellent goalie,” said Bill “Buzz” Schneider, the former Babbitt star who also was a senior in 1972. “His father was an excellent man, not only as a hockey player, but as a man. But Peter was a great goalie, and he was a nice kid.”

LoPresti played at the University of Denver for two seasons before embarking on a pro career that included 175 games in the NHL, most of them with the Minnesota North Stars.

“In high school you are playing with your buddies, kids you’ve gone through the battles with since you were in the sixth and seventh grade,” said LoPresti, who lives and works in the Twin Cities. “It was a thrill to play for your high school team. Everything that happened to me after that was icing on the cake.”

Read more about Pete LoPresti's selection into the Top 100