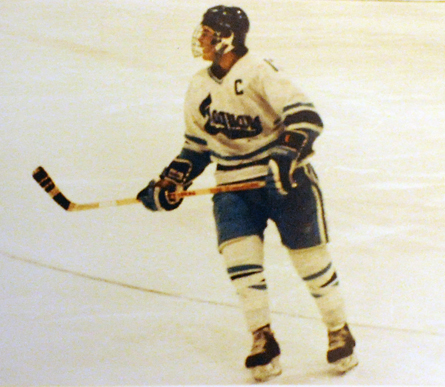 Tony Bianchi is Bloomington Jefferson's career leader in assists with 107 and ranks second in career points with 164. Photo courtesy of John Bianchi

Steve Bianchi is the oldest, the speed merchant with more maneuverability than a European sports car.

Joey Bianchi is the youngest, the rocket-launching goal scorer with a fortune teller’s ability to predict the path of the puck.

In the middle is Tony Bianchi, the slick-passing distributor who calculates angles and trajectories with the ease and precision of a champion billiards player.

Tony never encountered a pass he didn't think he could make. The way he figured it, there was no reason to expend all the energy required to elude defenders when you could just as easily pass the puck around, between or over them.

“Tony was so clever,” said John Bianchi, Tony’s father and the former longtime Bloomington Jefferson assistant coach. “You look at those passes he made off the boards. My god, he was really effective that way.”

The 5-foot-6 Tony’s pass-first mentality can be traced to his positioning in the Bianchi hierarchy. To gain acceptance in backyard pickup games with Steve and the rest of the older neighborhood kids, Tony devised a strategy. He knew hogging the puck or camping out in front of the net calling for passes wasn’t going to get him far.

“I never really had a chance to shoot and score because all the kids were so much older,” said Tony, who is seven years younger than Steve, “but I had to make something happen if I wanted to be a part of it.” 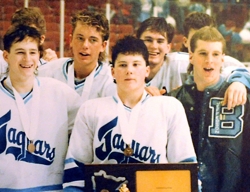 As a kid barely tall enough to see over the boards, Tony for years served as a stickboy, filled water bottles and shagged pucks for Steve’s teams.

Tony was at the St. Paul Civic Center in 1981, watching in awe as the Jaguars beat Grand Rapids in overtime in the state quarterfinals. Adding to the excitement was Steve’s jaw-dropping move at the blue line that left a Grand Rapids defenseman grasping for air. Steve completed the play by scoring on a breakway, his third-period goal-for-the-ages helping Jefferson erase a two-goal deficit.

"It gets you pretty excited about playing hockey that is for sure," Tony said about that game's impact on his career.

Joey is five years younger than Tony. When the youngest of the Bianchis begged Tony to join the backyard pickup games, Tony – always thinking strategy -- knew just what to do with his little brother.

“I would put him to the side of the net and say, ‘Stand right here. Trust me, I’ll pass it to you and you put it in the net,’ ” Tony said. “So I would pass it to him, setting up goals for him on a silver platter. That made him happy.”

Tony could score, too. His goal with less than 5 minutes left in the 1989 state championship game forged a 4-4 tie with Rochester John Marshall. Bloomington Jefferson went on to win in overtime.

Tony had had two goals and five assists in the 1989 tournament. His seven points were one short of the eight posted by teammate and tourney scoring leader Sean Rice.

“He just had very good ice awareness,” Joey Bianchi said about his older brother. “He really understood where everyone was on the ice. He could really thread the needle when it came to passing.”

As a freshman at the Univeristy of Minnesota, Nick Checco, another former Jefferson standout, played on a line with Tony. Checco remembers being amazed at the incomprehensible passes landing on his stick.

“Tony would make passes in situations where most guys wouldn’t even consider it,” Checco said. “All you would have to do is get to an open area and he would put it on your tape. If I had a decent set of hands, I would have scored a lot of goals playing with him.”

Tony, who lives in Savage, is a Bantam A coach in the Prior Lake youth hockey system and works as a manager for PODS (Portable On Demand Storage).