Best of the first 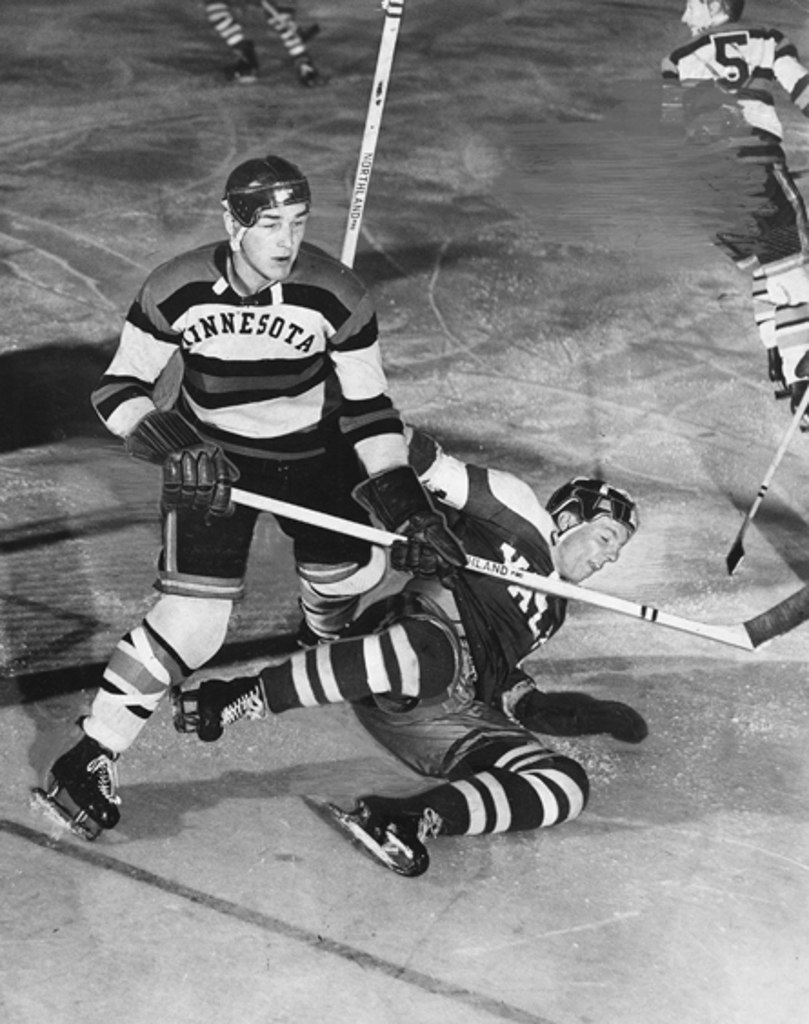 Dick Dougherty led International Falls to its first state tournament appearance in 1950, then starred for the University of Minnesota team that reached the NCAA finals in 1954. Star Tribune file photo

Eveleth was at the pinnacle of high school hockey in the late 1940s.

Heading into the 1949-50 season, the Golden Bears already had gone undefeated to win two state championships. Two more perfect seasons were on their way.

One hundred miles to the north, and a world away in terms of high school hockey pedigrees, was International Falls.

In 1948-49 the Broncos were just finding their footing as a newborn program.

The Minnesota State High School League sanctioned the first state tournament in 1945, but for years Eveleth had been producing powerhouse teams and NHL stars.

As for International Falls’ pre-high school league history, well, there was none. When Dick Doughtery stepped on the ice as a strong, fleet-skating junior forward in the winter of 1948, the Broncos were at Chapter 1, Page 1.

Unlike Eveleth, International Falls did not have an indoor rink. The Broncos skated at an outdoor rink in the center of town, right next to the band shell that sits in Smokey Bear Park. Eveleth native Robert DePaul was the first International Falls coach, and he didn’t have much to work with in terms facilities or talent.

Dick Dougherty was a standout on the U.S. team that won a silver medal at the 1956 Winter Olympics.

But with Dick Dougherty and his brother Bill playing together on a forward line, the fledgling Broncos had enough firepower to grab the attention of mighty Eveleth.

“Dick Dougherty was excellent,” said Ron Castellano, the former Babbitt High School coach who in 1949-50 played with John Mayasich and Dan Voce on Eveleth’s top line. “I remember Mayasich talking about them, saying that when we played them, that’s the line we had to shut down.

“If we shut them down, we could win the game.”

Eveleth beat International Falls 5-1 in the Region 7 championship game in 1950.

“They were unbeatable,” Dougherty said. “With Mayasich and those guys, I don’t think there would be anybody that could touch them.”

But the Broncos, who had notched playoff wins over Hibbing and Duluth Denfeld, still gained entry to the state tournament in St. Paul as the Region 7 runner-up filling the Region 3 hockey void.

Dougherty said he and his Broncos teammates didn’t know much about the state tournament atmosphere before heading south to the St. Paul Auditorium.

“It was great,” he said. “It was hard to get used to playing in an indoor tournament. I think they were pretty excited in town about us getting there.”

The 5-foot-10, 170-pound Dougherty scored in double overtime as International Falls beat St. Paul Murray 3-2 in the quarterfinals. Dougherty scored again the following day as the Broncos lost 4-2 to Williams in the semifinals.

International Falls finished the tournament with an 8-2 thumping of St. Cloud to take third place. Dougherty scored another goal and was one of eight players named to the all-tournament team. The Broncos received a hero’s welcome when they returned home.

A foundation for a program that would go on to win seven state titles was built. For his part in what would become a 1960s dynasty program that rivaled Eveleth’s late-1940s early-‘50s dominance, Dougherty has alternately been described as the “first of the best” and the “best of the first.”

“He was just good,” Merlin Holm, a 1948 International Falls graduate, said about Dougherty. “Dick was a good-sized kid for back then, and he could really fly. There aren’t many players who have come out of town who were better than him.”

Speed and agility were the trademarks of Dougherty’s game, and he parlayed those eye-popping skills into a scholarship at the University of Minnesota.

“I didn’t get to see him play in high school,” said Jim Amidon, another former Broncos star who is Dougherty’s brother-in-law. “I know that he was hugely strong, and that both of my legs together aren’t as big as one of his.”

One of the top scorers in Gophers history, Dougherty was a star on the team that reached the NCAA finals in 1954.

He led the 1956 U.S. Olympic team to the silver medal in Cortina d’Ampezzo, Italy.

Dougherty lives in Green Bay, Wis., but still spends his summers in International Falls. He was inducted into the U.S. Hockey Hall of Fame in 2003.