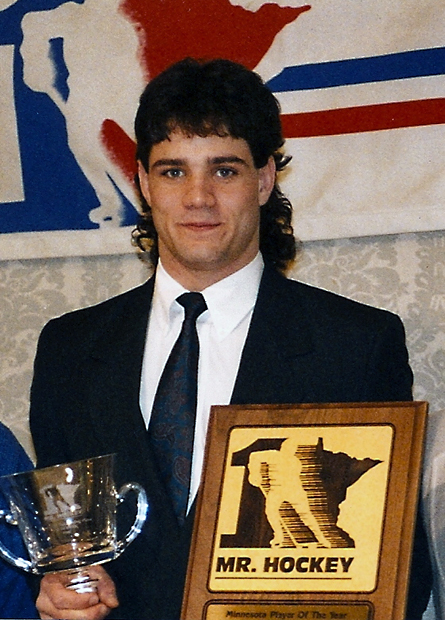 Joe Dziedzic had been summoned to the cafeteria.

The command had come by way of the principal.

This can’t be good, Dziedzic thought.

A senior at Minneapolis Edison, Dziedzic arrived to see a table covered with brightly colored photos and brochures of Stanford University. The promotional material focused on the school’s Palo Alto, Calif., campus and the football stadium in particular.

“I had committed to play hockey at (the University of Minnesota) months before,” Dziedzic said. “I don’t know (if the Stanford recruiter) didn’t get the word or thought he could change my mind or what.

As a 6-foot-3, 215-pound running back and linebacker who was named the Star Tribune’s All-Metro Player of the Year in the fall of 1989, Dziedzic was the most heavily recruited athlete in the state. USC, UCLA, Michigan, Michigan State – teams from all the top conferences already had come knocking.

“It’s funny,” Dziedzic said. “A lot of people will tell you I was a better football player than I was a hockey player.” 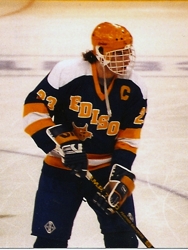 Minneapolis Edison's Joe Dziedzic scored 73 points in 22 games as a junior during the 1989-89 season. Courtesy photo

Dziedzic, though, had his future locked. He wasn’t going to play college football, not at Stanford or anywhere else. He grew up in northeast Minneapolis, just a few minutes from the University of Minnesota campus and old Mariucci Arena. As a kid, he was a regular at Gophers games.

“I remember the smell and the atmosphere there,” Dziedzic said. “Just watching all those games made you think a little bit. I knew in my heart I wanted to play hockey.”

Dziedzic was starring on Edison’s varsity as a sophomore. As a junior, he amassed 46 goals and added 27 assists for 73 points in just 22 games. With his size and abundance of athletic ability, Dziedzic wasn’t so much a college prospect as he was a recruiter’s dream.

Edison had some other high-end talent. Goaltender Derek Herlofsky would go on to win a national title at Boston University. Matt Podkopacz was a gifted forward who joined Dziedzic to form a potent scoring punch.

There were a handful of other top players, but the dropoff in talent beyond the first couple of lines was severe.

“For a lot of them their first time playing was in high school.”

Depth-challenged Edison had little chance of reaching the state tournament. The Tommies were in Section 5AA along with Bloomington Jefferson and Bloomington Kennedy, two programs that were at the peak of their powers.

Starting in 1984, Kennedy and Jefferson met in the section final eight times in nine seasons. The teams combined for three state titles in that span.

Edison reached the section semifinals in 1988 and 1989. With Dziedzic as a senior in 1990, the Tommies were knocked off by Willmar in the section quarterfinals.

Dziedzic was limited to 17 games as senior because of a separated shoulder. He scored 29 goals and added 19 assists for 48 points.

“I thought Joe was a very exceptional as far as understanding the game,” said former Edison coach Tim Cornwell. “He had an exceptional shot. He could get it off quick.”

Dziedzic could play a physical style, but Cornwell said he encouraged his big forward to tone down the hitting.

“He was so much bigger than the rest of the players,” Cornwell said. “I would tell him, ‘Joe just kind of push them into the boards, don’t hit them too hard.’ Because he would get a penalty. It would be a nice clean hit, and he would get whistled for it.

Edison played in the old Minneapolis Conference when the balance of metro hockey power had shifted squarely to the suburbs. The weak competition helped pad Dziedzic’s point totals.

“When they played the better teams, it didn’t stop him from performing,” former Edison assistant coach John Brandt said. “He had a knack for scoring. Just his overall athletic ability was outstanding.”

Dziedzic, who was drafted 61st overall by the Pittsburgh Penguins in 1990, played four seasons with the Gophers before turning pro. He played 130 regular season games in the NHL with Pittsburgh and the Phoenix Coyotes.

Dziedzic retired from pro hockey after the 1998-99 season. He is the head coach at St. Paul Academy and owns and operates Joe Dziedzic Hockey Skills Training.