Spitfire of a Bronco 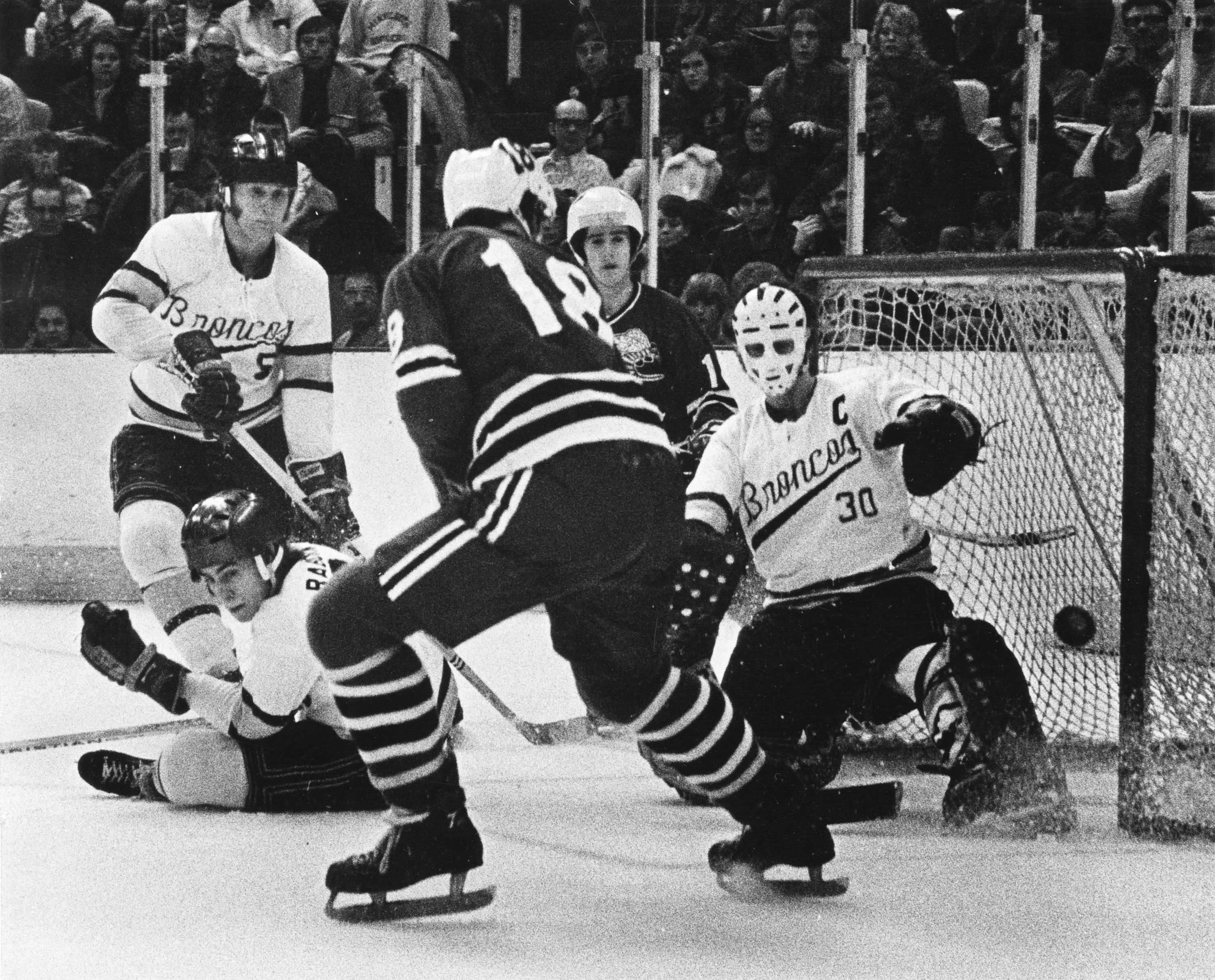 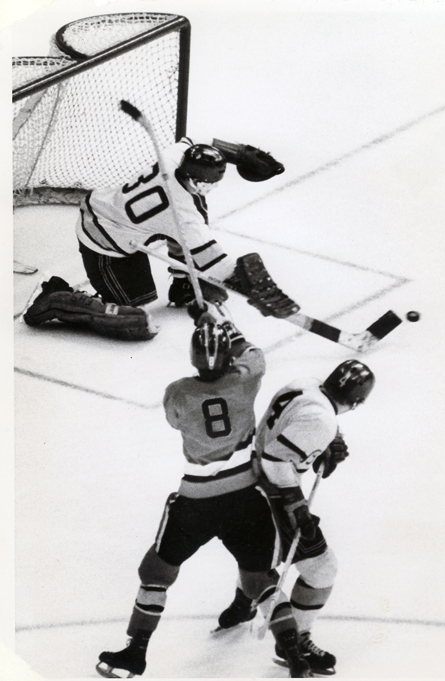 International Falls had lost a state championship game to Grand Rapids at the Pee Wee level.

Two years later, as Bantams, it was Grand Rapids beating International Falls for yet another state title.

In 1972 the championship game of the state tournament was an all-northern Minnesota showdown.

Those same kids who had done battle for so many years were about to match up again, only this time the season-ending game was to be contested on the state’s biggest stage. 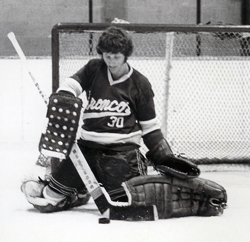 With Pete Waselovich in goal, International Falls won a championship and finished no worse than third in three straight state tournament appearances from 1971-73. Courtesy photo

Pete Waselovich, to name one Broncos player, was fed up with losing to the Indians (their nickname would later become Thunderhawks).

Losing always came hard for Waselovich, the wiry spitfire of a goaltender who as a sophomore on Day 1 of tryouts for the varsity team incurred the calculated wrath of legendary International Falls coach Larry Ross. Waselovich’s frustrations over his play (perfection was Waselovich’s only real comfort zone) reached a boiling point, and his stick and other pieces of gear randomly were being flung to the ice.

“It was the first day of practice, and Peter is in with a lot better players than he is used to playing against,” said John Prettyman, a Broncos senior during Waselovich’s sophomore year. “Pucks are going in where normally they probably didn’t. He was getting mad and throwing equipment.

“Ross told him, ‘Go off the ice an don’t come back until I tell you to.’ He kicked him off the ice that day. It sure didn’t take long for them to come to an understanding. By Christmas time that year they were great friends. Larry spent Christmas Eve over at Peter’s house.”

According to Prettyman, long before that first practice Ross had talked about finding a way to harness the young Waselovich’s intensity. More than anyone, Ross, himself a former goaltender, knew the importance of the mental side of playing the position.

International Falls was churning out some of the state’s best goaltenders in the 1960s all the way through to Ross’ retirement in the mid 1980s. Mike “Lefty” Curran, Larry Roche and Ron Beck all won state championships in the 1960s, providing Waselovich with a template for success.

“Larry wrote a book about goaltending,” Waselovich said. “And Lefty was in the pictures. I guess I developed my style from those pictures. I was more of a butterfly style goaltender.”

Waselovich started hockey late. As a youngster he suffered from Perthes disease, which is a temporary condition in children in which the head of the thighbone loses its blood supply and collapses. 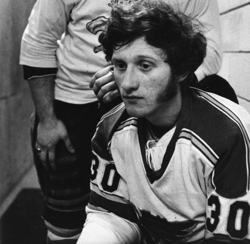 Pete Waselovich is part of a an exlusive club of goaltenders who have appeared in three state tournaments. Star Tribune file photo

“I worked my way out of that,” Waselovich said, “but I didn’t start skating until I was 10 or 11 years old. I lied my way onto a hockey team. They played me as a forward. I didn’t know what offsides was.

“We watched a lot of Hockey Night in Canada in my house, and I started watching (goaltenders) like (Terry) Sawchuk, (Johnny) Bower and (Roger) Crozier. And I thought, ‘Why not?’ ”

Just like that, Waselovich became a goaltender. He lived within walking distance of South International Falls’ Carson-Lupie outdoor rink. Halfway between Waselovich’s house and the rink was a neighbor who sharpened skates.

“He charged a quarter,” Waselovich said. “He would sharpen my goalie skates and straighten them out, too.”

Waselovich’s skates, not to mention his body, took a pounding. Hockey was an all-day, every day activity no matter the weather conditions.

“We didn’t care what the temperature was,” Waselovich said.

Waselovich said he would join his neighborhood buddies in walking the 2½ miles from South International Falls across the Canadian border to Fort Frances, Ont., to watch the Broncos play their home games at Fort Frances Memorial Arena.

“It’s not like today, where parents are toting their kids around,” he said.

Learning to skate while he learned the inner workings of being a goaltender, Waselovich quickly established himself as one of the best in northern Minnesota. As a freshman, he helped International Falls’ midget team reach the national tournament. As a sophomore, he beat out two seniors for the starting role by late December.

“When he came on the scene it was like, ‘Wow this kid is a competitor,’ ” Prettyman said. “He was quicker than a cat.

“I can still remember, every time we got scored on, we would come back to him and it was always his fault. A defenseman could trip and fall at center ice and a guy would go down all alone on him and score, and it would always come back to him. He never blamed anyone else.”

With the young Waselovich in goal, the Broncos reached the 1971 state tournament, where they lost to Roseau 5-2 in the semifinals and finished third with a 2-1 triumph over St. Paul Johnson.

International Falls beat Grand Rapids 5-1 in the Section 7 championship game in 1972. The Broncos then routed Bemidji 8-3 in the state tournament quarterfinals and eked past Minneapolis Southwest 2-1 in overtime in the semifinals (with Waselovich making 38 saves).

Grand Rapids, which had reached the tournament through the “back door” as the Section 7 runner-up representing Section 3, awaited in the title game.

International Falls trailed 1-0 entering the third period, when it scored three unanswered goals to take control. The Indians scored with 28 seconds remaining to pull within 3-2 but couldn’t get the equalizer past Waselovich. 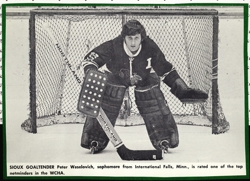 Pete Waselovich of International Falls was an instant college star at North Dakota, where he appeared in 33 games (then a school record) in 1972-73. Courtesy photo

Waselovich finished with 32 saves. After all those years of disappointment, the Broncos finally had defeated their arch rival in a season-ending game. The championship was theirs.

When the final buzzer sounded, did Waselovich fall onto the ice, overcome with joy? Did he scream and yell? Did he throw his equipment in the air?

“The thing that we were worried about is Larry,” said Waselovich, who was named to the all-state tournament team.

Waselovich finished his high school career the following season with a 4-0 shutout of St. Paul Harding in the third-place game of the state tournament. International Falls had lost to eventual champion Hibbing 5-4 in a semifinal matchup that many observers considered the true state championship game.

Recruited by most major Division I programs, including the University of Minnesota, Waselovich choose North Dakota because of the opportunity to play as a freshman. He set single-season records for games played by a goaltender (33) and saves (1,126) in 1973-74.

Waselovich played high-level amateur hockey for the Warroad Lakers after college and still lives in Warroad with his wife, Rose. He works in technical support for Marvin Windows and Doors.