Wyatt Kaiser, determined to make a lasting impression, took charge of the Huskies in their season opener. 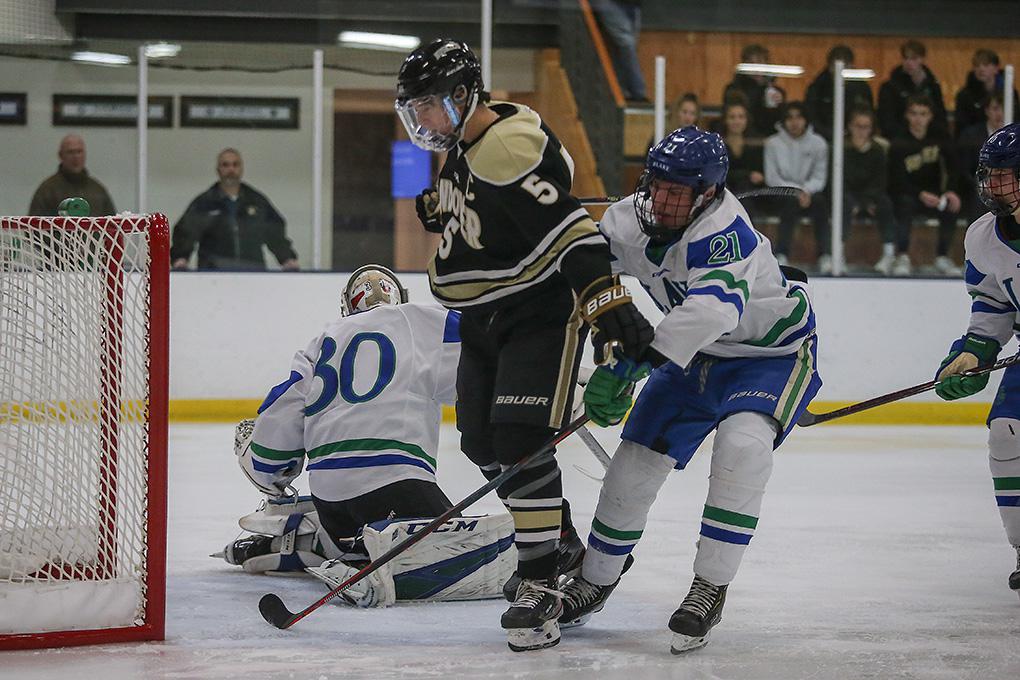 Andover defenseman Wyatt Kaiser (5) fought his way past Blake's Matt Olive to score the first of his two goals in the Huskies' 6-3 victory. Photo by Mark Hvidsten, SportsEngine

During Andover’s 6-3 win Thursday over Blake, the Huskies' Wyatt Kaiser scored on an improbable one-handed dangle, he scored on a blast from the point, he offered suggestions for a revamped power play, he accepted a challenge from his coach before the third period and he took a faceoff for the first time in his high school career.

Is there anything this kid can’t do?

Well, there’s one thing he hasn’t done — play in the state tournament. And filling that void in his resume is what drives the senior defenseman and likely NHL draft pick who just a few weeks ago was playing high level junior hockey in the USHL for the Dubuque Fighting Saints.

“I came back here (from Dubuque) pretty confident, but more than anything I just want to win the state tournament,” Kaiser said. “I couldn’t care less about anything outside of that. My main goal is for me to be the best I can for the team.” 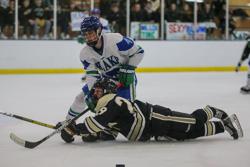 That might mean suggesting the Huskies add a few new wrinkles to their power play this week in practice (the Huskies went 3-for-3 with the man advantage Thursday), or lining up at center to start the third period (much to the surprise of Blake standout center Joey Miller).

“We started (Kaiser) at center to start the third, and that was more to punish (Hunter) Jones for that penalty at the end of the second than it was to spark anything out of Wyatt,” Andover coach Mark Manney said. “But when he got out there I saw Joey Miller pointing at him and looking at the bench, like, ‘Hey Kaiser is up at center what should we do now?'"

Blake had no answer for the 5-foot-11, 170-pound Kaiser, who has committed to play at Minnesota-Duluth. Kaiser’s low blast from the point in the third period deflected off something or someone in the slot and rocketed high into the upper reaches of the net. That put the Huskies ahead 5-3, and he later assisted on Jones’ power-play goal to complete the scoring.

Jones, who took some heat from Manney in the locker room before the third, made a beautiful pass from the corner to set up Michael Clough for an open-net goal early in the third that broke a 3-3 tie. Manney said all was forgiven after Jones’ third-period performance.

“Yeah, I can’t stay mad at him,” Manney said. “He’s my favorite player because he’s goofy, like I am.”

Manney said some of the Huskies’ younger players were feeling the jitters that come with a new season. Andover also is feeling the weight of high expectations — it was picked among the top five or six in Class 2A in most preseason rankings. The Huskies also had to replace graduated all-time leading scorer in Charlie Schoen and top returning scorer Luke Kron, who will miss the first couple weeks of the season with a wrist injury.

“We got a lot of veterans on our first two lines and in our top four defensemen, but none of those guys have really been the man before,” Manney said. “And they’re really not sure who is the man.

Kaiser’s performance left no doubt of his capabilities. If Andover is to reach the state tournament for the first time in the program’s history, Kaiser, a co-captain along with Kron, will no doubt be a driving force.

“He’s a helluva a hockey player,” Jones said. “He’s got a motor that never stops. And he moves the puck up. He’s not selfish, and I love that.”

Blake rallied from a 3-0 deficit by scoring three unanswered goals in the second. But the Bears, more physical than they’ve been in recent seasons, ran out of gas in the third.

“Sometimes you stretch yourself that much to come back, and sometimes it’s hard to reach down and continue,” first-year coach Rob McClanahan said. “We’ve got 24 games left, and as much as I wanted to go 25 and 0, it’s more about getting ready for the end of the year.

“That’s what it is all about.” 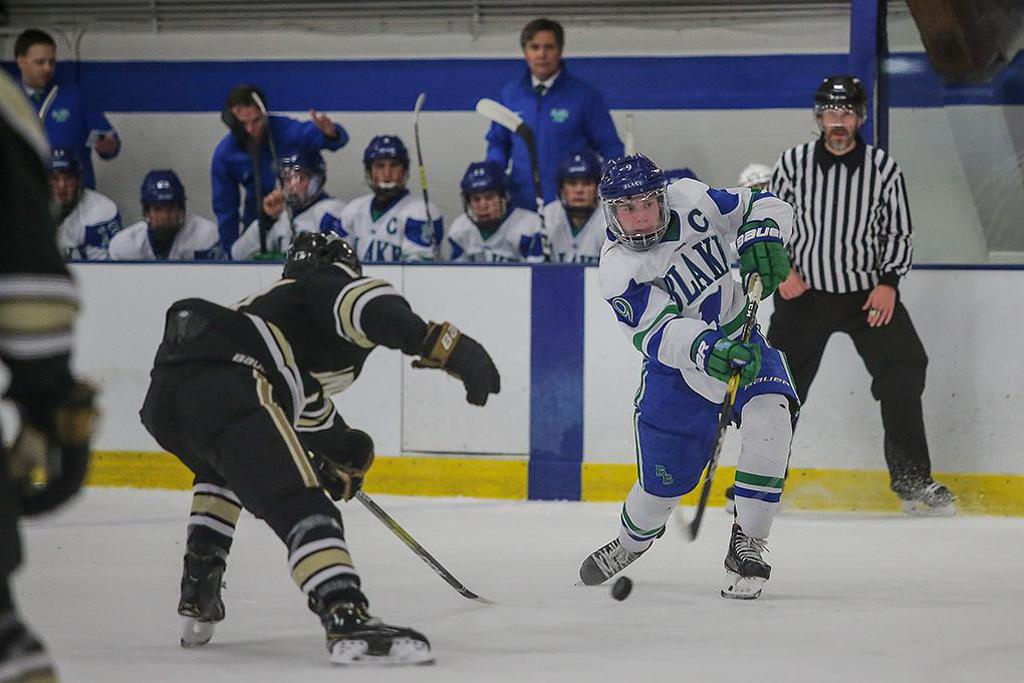 Blake's Jack Sabre (9) took a shot from near the blue line that got past Andover goalie Will Larson and tied the game at 3-3 late in the second period. Photo by Mark Hvidsten, SportsEngine

Senior defenseman Wyatt Kaiser, a Mr. Hockey candidate committed to Minnesota-Duluth, scored twice and added an assist as Andover topped Blake 6-3 on Thursday in one of six games to open the high school boys' hockey season.

Kaiser was at his best in the first and second periods when, not coincidentally, the Huskies, ranked No. 2 in the Class 2A coaches' preseason poll, scored three goals in each stanza.

Andover (1-0-0, 0-0-0) led 3-0 after the first as senior Gunnar Thoreson scored twice, less than two minutes apart, along with the first of Kaiser’s goals.

Blake (0-1-0, 0-0-0) rallied in the second, scoring all three of its goals to tie the score at 3-3. Ben Dexheimer, Brett Witzke and Anderson Blum were the goal scorers for the Bears, who fired 13 shots at Huskies goaltender Will Larson.

Michael Clough put Andover ahead 4-3 just 3:18 into the third period and Kaiser made it 5-3 less than two minutes later. Hunter Jones, playing on the top line with Cough and Thoreson, added the final goal midway through the third.

Blake goaltender Aksel Reid finished with 13 saves while Larson, who sat out all of last season after undergoing double hip surgery, had 23 saves.

The teams meet again on Saturday in Andover to complete the home-and-home series.