A program that came close to winning it all last season has added three top players who played elsewhere last year to a strong returning core. 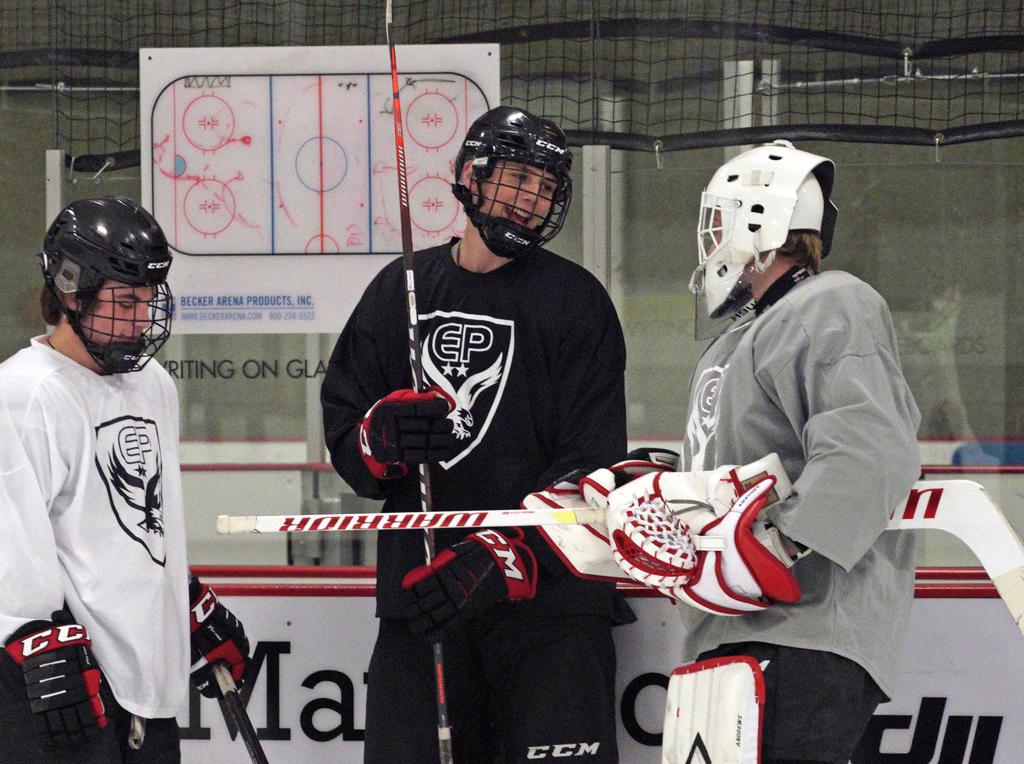 Whether red, gray, white or black in color, Eden Prairie’s practice jerseys feature the same quote on the back: “Risk something or forever sit with your dreams.”

Langenbrunner and Blake have NHL fathers. Steeves’ older brothers, Alex and Matt, play at Notre Dame. At first blush, adding three top players to an Eden Prairie team with strong returning players — a group that was a shot from winning the Class 2A championship in overtime last March — seems like the stuff of dreams.

Risks were involved, however.

“I definitely risked going to a new school and meeting new people,” said Steeves, a senior wing who was born in Minnesota, moved as a preschooler to New Hampshire, and played for a team in Michigan last season. “But I met so many good guys so quick that I felt like I belonged.”

Langenbrunner, a junior defenseman, left his varsity teammates from a year ago because his father, Jamie, took a new job within the Boston Bruins organization and needed to be closer to the Minneapolis-St. Paul International Airport.

“I risked a lot of things, honestly,’’ Langenbrunner said. “There’s been a little bit of myself that’s been lost in the move. But at the same time, I’ve enjoyed getting to know these guys. It’s been a great fit.”

Langenbrunner, who has made a verbal commitment to Harvard, joins fellow future Division I players John and Luke Mittelstadt (Minnesota) as well as proven, dynamic forwards Carter Batchelder and Drew Holt.

Expectations are in orbit. Even playing in Section 2 with Minnetonka and Holy Family, Eden Prairie is considered by many a lock to play at Xcel Energy Center in the state tournament next March.

“There are really high expectations,” senior forward and co-captain John Mittelstadt said. “You don’t want to get too cocky because we have a lot to work on. We know the talent is there; we just need to put it all together. It’s a good locker room and having a good group of guys will help.”

Inside the coaches room earlier this week, coach Lee Smith listened to the shouts and laughter coming from the other side of the door. Smith, in his 27th season, smiled knowing his players were still together an hour after practice. He’s not worried about scoring enough goals to keep players from getting selfish and the team imploding. Quite the opposite.

“What we’ve seen is that we need to shoot more,” Smith said. “We’re so concerned about the pretty ones. We will need to get better at the dirty ones.”

From a talent and goal-scoring standpoint, the current Eagles’ team ranks with the 2011 state champions featuring Kyle Rau, Smith said. But there’s a long way to go, Smith warned, before potential is proven.

“We have a really good team,” Smith said. “But there are a lot of other really good teams out there. Last year we had to get better through the fact that we weren’t very good at times. And we learned from that.

“This year, we can’t settle for taking a night off and still winning and then saying, ‘Look at us, we’re great.’ ”

Players are getting the message. John Mittelstadt said the team is “competing every day in practice. Even getting a little heated at times, which is a good thing.”

Steeves, his wing, added, “We’ve got a lot of skill but that’s not enough. We’ve got to put in the effort.”

Despite the team’s depth of talent, Langenbrunner said he senses “an underdog mentality. I wasn’t part of it last year, but I know the guys who were part of it are still hungry. They lost a close game for the championship and they want it more than anything.”

Making room for three new players meant varsity cuts, which Smith called annually “gut wrenching” and more difficult this year. “We try to be as loyal as we can,” he said. “But yet we also try to be as fair as we can in selecting the best players.”

Smith said he feels “very fortunate that these guys picked Eden Prairie. They could’ve played anywhere. The only thing that we can promise them is we can provide them a good schedule, we’re going to coach them up and our goal is to be better at the end of the year than the start to give ourselves a chance.”