After letting a two-goal lead slip, the Pioneers needed senior forward Charlie Strobel and his eventual game-winner to beat the Bengals. 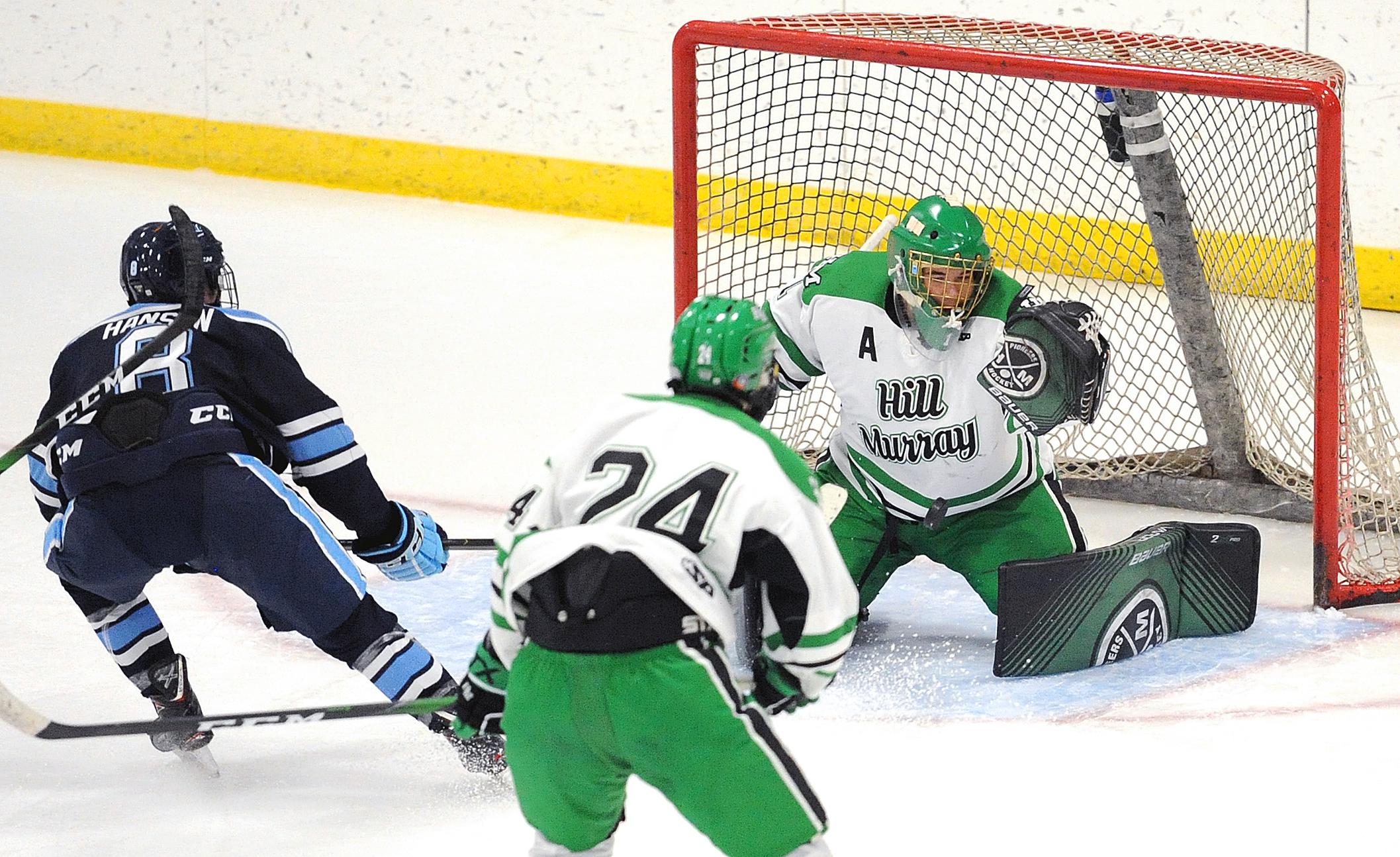 Hill-Murray senior goaltender Remington Keopple made 25 saves against Blaine on Wednesday night, including this one on Bengals forward Hunter Hanson. Photo by Loren Nelson, LegacyHockeyPhotography.com

When other players tanks’ are approaching empty, Charlie Strobel’s is still topped off.

When they lose a step in the late going, he gains two.

They look for to the bench for relief. He longs for extra ice time.

“If he had his way, he’d want to be out there for 51 minutes,” Hill-Murray coach Bill Lechner said after the Pioneers’ 4-2 victory over Blaine on Wednesday night at Aldrich Arena.

Strobel didn’t play the full game in the season opener for both teams. He made an impact just the same. The senior forward and co-captain scored twice for the Pioneers with — surprise, surprise — both goals coming in the third period. 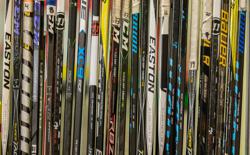 Strobel scored 43 seconds into the third to break a 2-2 tie, then added an insurance goal with 3:40 remaining in the matchup of teams ranked in the top 10 in the coaches' poll (Blaine is No. 8, Hill-Murray No. 9).

On his second goal, Strobel used his fully charged battery to beat a lagging Blaine defender to an open area in the slot, then converted a pass from behind the net from linemate Nick Pierre.

“That goal right away in the third period got the boys going,” Hill-Muray goaltender Remington Keopple said.

Added Lechner: “He’s our energy. The kids feed off him.”

Strobel comes from Hill-Murray hockey royalty. His dad, Mike, and uncle Mark were twin brothers who served as twin engines for the Pioneers’ team that captured the 1991 state championship. Mike scored twice in the title game against Duluth East that year, including the winning goal in the third period.

Mike doesn’t spend a lot of time reliving those glory days, although he has told Charlie a story or two.

“I think he’s letting me create my own path here at Hill-Murray,” Charlie said about his dad. “I respect that.”

The elder Strobels were as skilled as they were tough. Relentless, driven, fearless — adjectives for Mike and Mark work just as well for Charlie.

Strobel led Hill-Murray with 20 goals and 33 points last season, when the Pioneers failed to reach the state tournament. He’s intent on avoiding that fate a second straight year.

“I think us, as captains, wanted to set the tone for the team right away,” Strobel said. “Just kind of get the guys bonded as a team, on and off the ice. I think that’s going to be the most important thing for us if we want to get where we want to go this year.”

“They play a lot of shifts,” Lechner said about the forward trio of Richels, Cole Hansen and Jack Reimann. “If you try to match lines against them it goes against our philosophy. We feel like our depth can be an advantage for us. So in the third period we said, ‘Short hard shifts. Three lines are playing. Whoever gets them, gets them.”

Richels, who had several high-quality scoring chances, made an early statement that he was more than just a sidekick to Bryce Brodzinski, last year’s Mr. Hockey Award winner.

“If you read the boxscores last year you probably would have said, Oh yeah, he’s the benefactor of Bryce,” Blaine coach Chris Carroll said about Richels. “But if you came and watched him play you would say, ‘Holy cow, that kid is a player.’ ” 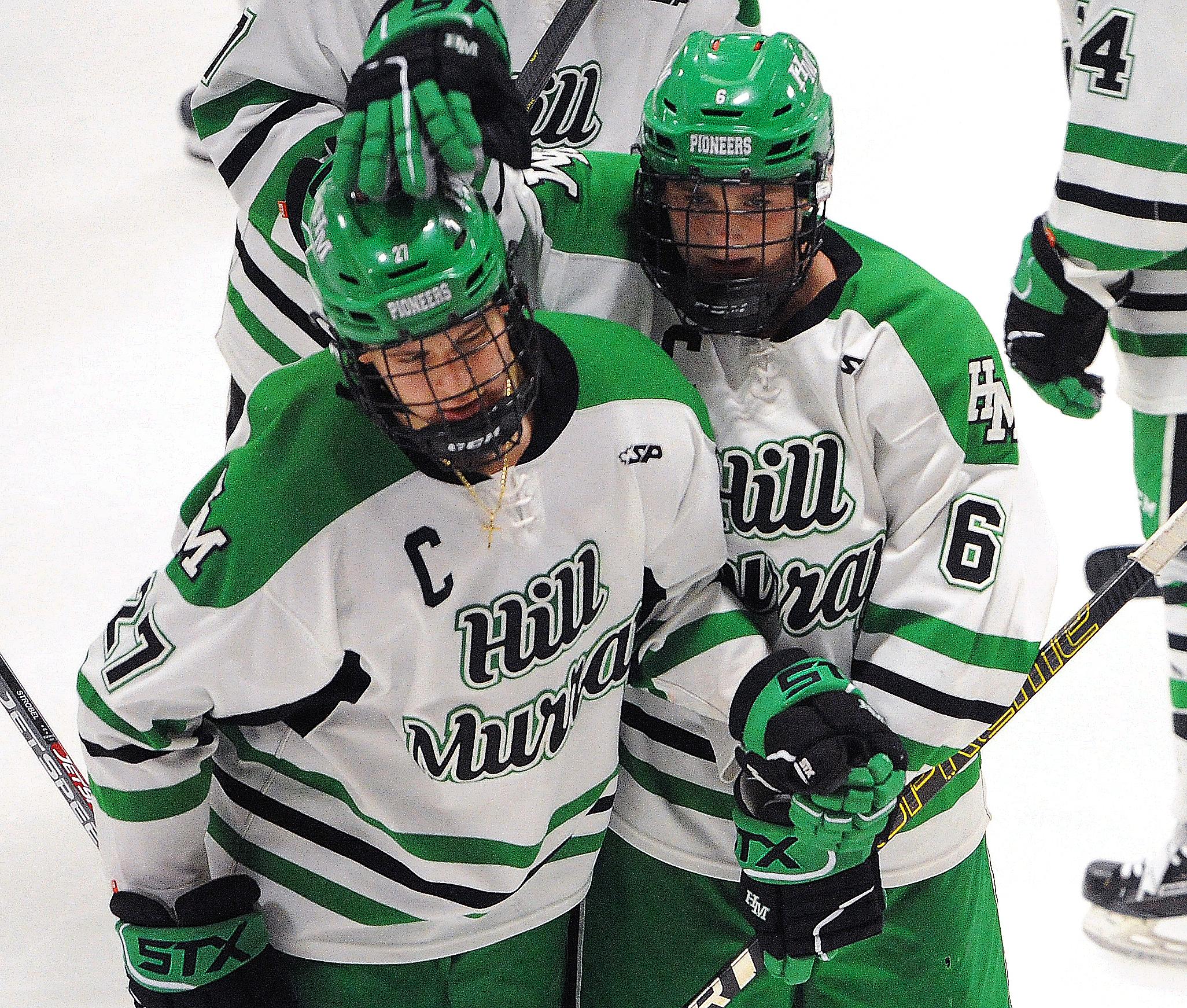 Charlie Strobel, left, is welcomed to the bench Henry Eischen after Strobel's goal put Hill-Murray ahead of Blaine 4-2 in the third period. Photo by Loren Nelson, LegacyHockeyPhotography.com

Charlie Strobel scored twice in the third period and Remington Keopple made 25 saves on Wednesday to lead Hill-Murray, ranked No. 9 in the Class 2A coaches’ poll, to a 4-2 victory over No. 8-2A Blaine at Aldrich Arena in the season opener for both teams.

Strobel, a senior forward, scored 43 seconds into the third to break a 2-2 tie. He added an insurance goal with 3:40 remaining, firing home a pass from behind the net from linemate Nick Pierre to complete the scoring.

Strobel’s performance offset a two-goal effort from Blaine senior Carsen Richels, a senior who had 42 goals and 83 points last season. Richels scored both his goals in the second period as the Bengals, a state tournament qualifier last season, rallied from a two-goal deficit.

Keopple, a senior, made several difficult saves on Richels and linemates Cole Hansen and Jack Reimann and was the benefactor of a handful of Bengals shots that clanged off the goalposts and crossbar.

Nate Hardy opened the scoring for Hill-Murray. His deflection from the slot was the lone goal in the first period. 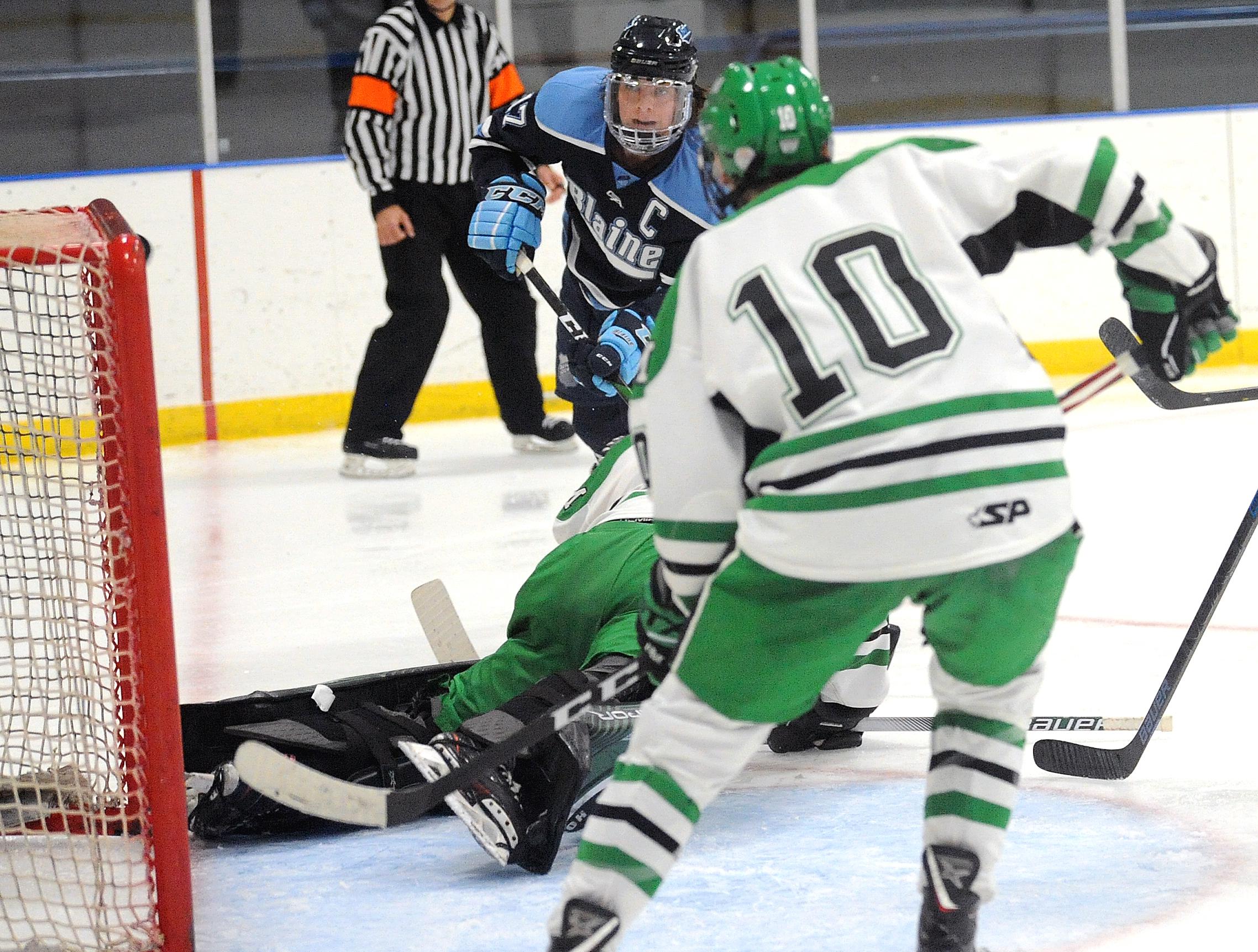 Blaine's Carsen Richels fires the puck just under the crossbar for his second goal of the game on Wednesday night against Hill-Murray. Photo by Loren Nelson, LegacyHockeyPhotography.com