Two second-period goals and Connor O'Brien's score in the third catapulted the Cadets to the win. 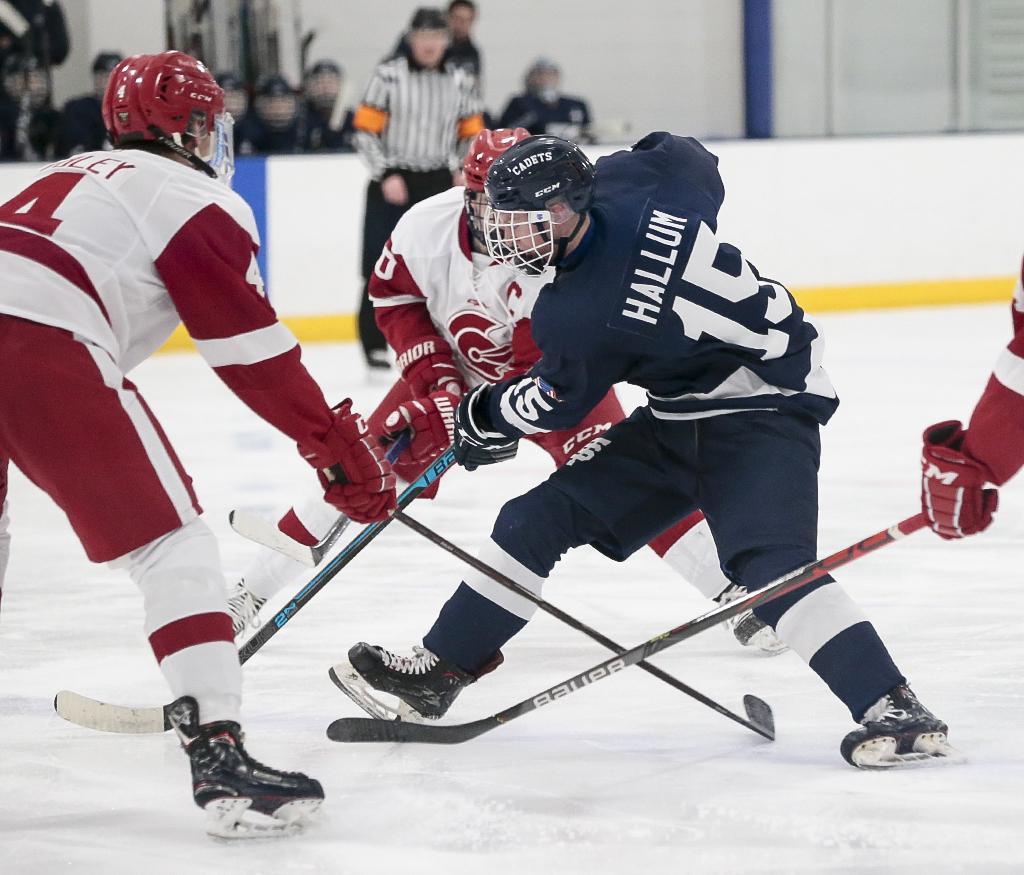 St. Thomas Academy's Jackson Hallum (15) carries the puck through a trio of Benilde-St. Margaret defenders. Hallum tallied two assists in the Cadets' 3-2 win over the Red Knights on Wednesday night. Photo by Cheryl A. Myers, SportsEngine 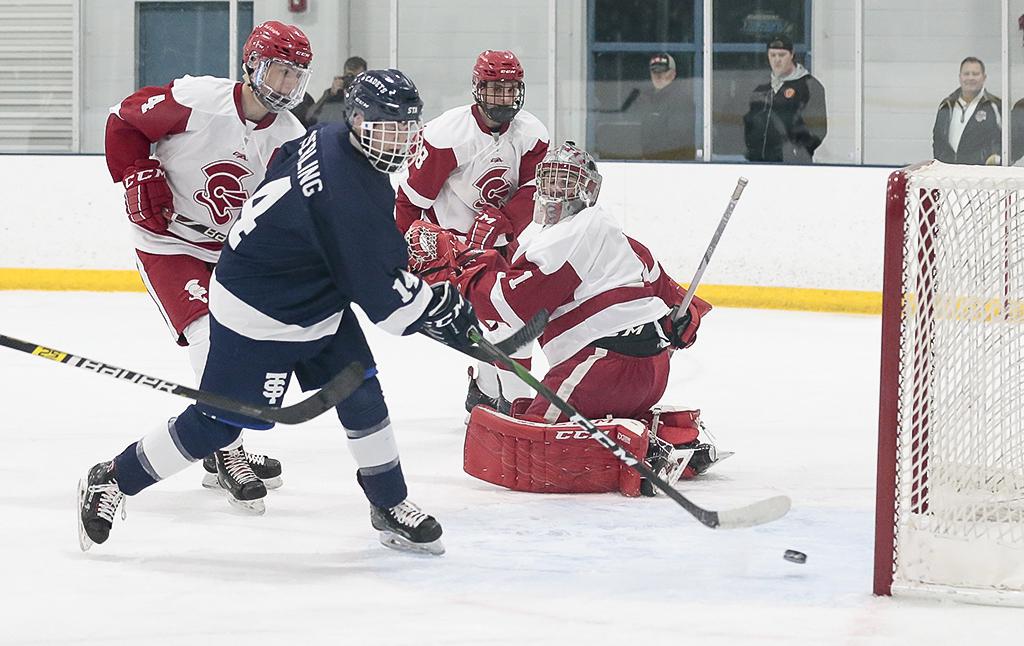 St. Thomas Academy's Will Soderling (14) scores off a rebound from teammate Tommy Deverell. Soderling's goal gave the Cadets a one-goal lead midway through the second period. Photo by Cheryl A. Myers, SportsEngine

Six games into Trent Eigner’s first season as St. Thomas Academy’s coach, it’s clear that his team is starting to play with an identity.

“We’re (six) games into my tenure here at St. Thomas and there’s still the realities of getting to know the personalities of the kids and I think it’s kind of ironic,” Eigner said. “ I don’t even know if our kids know what we are exactly as a team yet, and we’re still feeling our way around that.”

It became clear throughout the Cadets’ 3-2 win Wednesday over Benilde St. Margaret’s, ranked No. 9 in the Class 2A state coaches’ poll, that physicality, grit and energy are going to be things that this team values.

Although Eigner said his team was “enigmatic” in the first period — they trailed 1-0 after the first (due to a goal from Benilde-St. Margaret’s Jonny Woodford) — he used a fan’s perspective to get a point across. 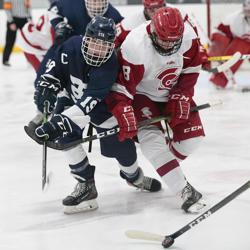 “I told our guys, ‘If I was watching that period as a fan, I would ask myself, ‘What is St. Thomas hockey about this year? What are they?’’ I think we lacked the physicality that I like to see,” he said.

The Cadets (4-2-0, 0-0-0) gave their coach an answer early, as Max Nagel and Jarod Wright executed a couple beautiful passes to set up Tyler Grahme with the equalizing goal 49 seconds into the second period.

“I thought we were a little slow in the first period, but after our second line buried one that kind of got us going, and that changed the momentum of the game,” St. Thomas Academy junior forward Jackson Hallum said.

Hallum, who came into the game with a team-high nine points, was a part of that slow start, as Red Knights (3-2-1, 0-0-0) defenseman Nate Schweitzer was never too far from Hallum, cutting off passes in Hallum’s direction and dispossessing him a few times in the first period.

“It was hard, but if you stay true to your systems it’ll happen for you, it’ll go your way,” Hallum said.

Things eventually did go his way, as he assisted on the next two Cadet goals, scored by Will Soderling and Connor O’Brien, to give him eight assists through six games.

Eigner was quick to compliment Hallum’s energy, which translated into goals for the team and points for himself.

“He’s just so athletically gifted that he’s going to get his chances, you’re going to focus on him and do all those things but it’s not a static sport where you grant possession, so when there’s a loose puck he’s going to win races, so he’s always going to be a factor that way,” Eigner said. “We always need his energy in every facet of the game.”

As far as the prospect of where this team can go in Eigner’s first season, Hallum has nothing but confidence after tonight’s win.

“We have no ceiling to what we can become. That was only the ninth (ranked) team, I think, but we want to get No. 1 so we’re still coming strong,” he said. 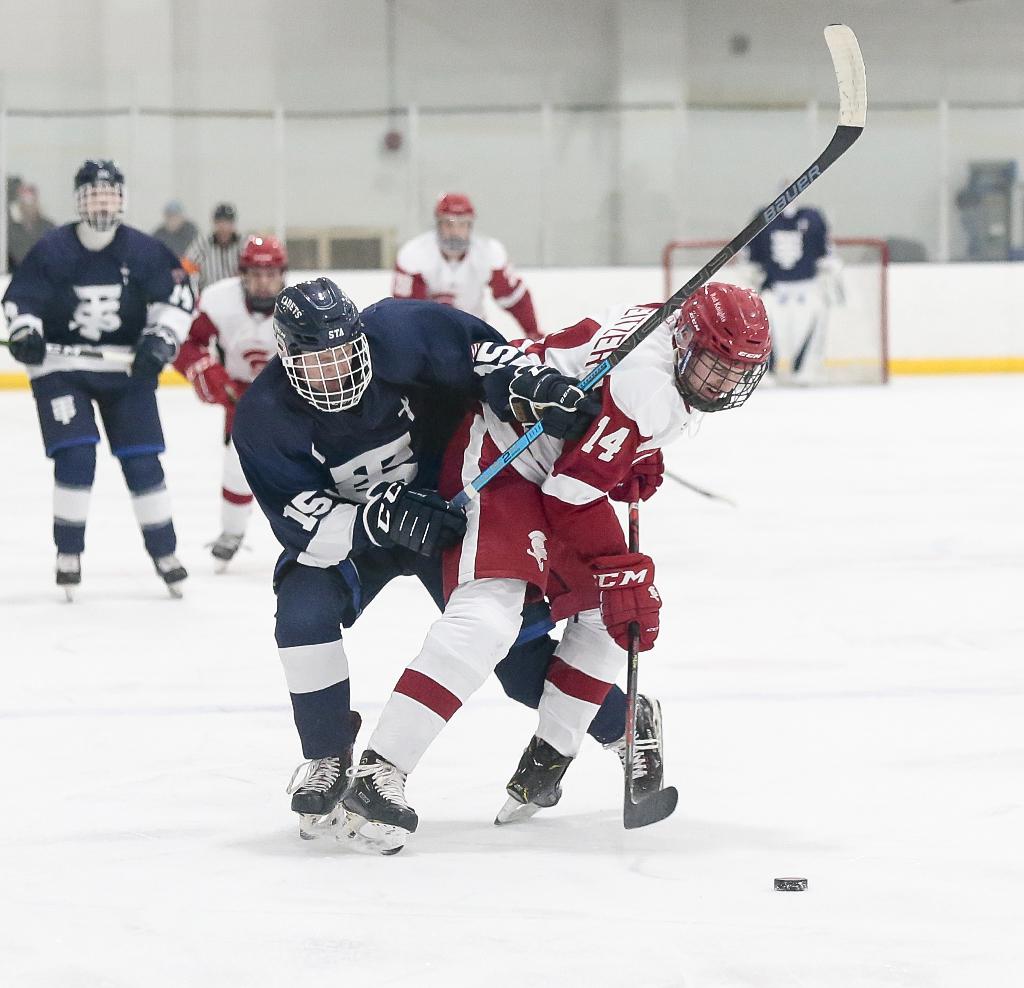 St. Thomas Academy went on the road to the St. Louis Park Recreation Center on Wednesday and came away with a 3-2 victory over Benilde-St. Margaret’s.

After a slow start from both teams, the Red Knights, ranked No. 9 in the Class 2A state coaches’ poll, opened the scoring late in the first period on a goal from Jonny Woodford, who put away a rebound off a blue-line shot from Nate Schweitzer.

The Cadets (4-2-0, 0-0-0) looked like a more energized team after the first intermission, as they scored 49 seconds in the second period. Tyler Grahme beat Benilde-St. Margaret’s goalie Carson Limesand after two one-time, cross-ice passes from Max Nagel and Jarod Wright.

Will Soderling gave the Cadets the lead midway through the second period, burying a rebound  off a Tommy Deverell shot. Connor O’Brien scored the eventual game-winner midway through the third to make it a 3-1 Cadets’ lead. Hallum and Wright each picked up their second assists on the game-winning goal.

Adam Marshall scored with 5:30 left in regulation for the Red Knights (3-2-1, 0-0-0) to make it interesting, but the Cadets absorbed the late pressure and escaped with a victory.