Hayden Masloski's first period goal was the difference maker, as goaltender Will Larson stopped all 23 shots he faced in the Huskies' win. 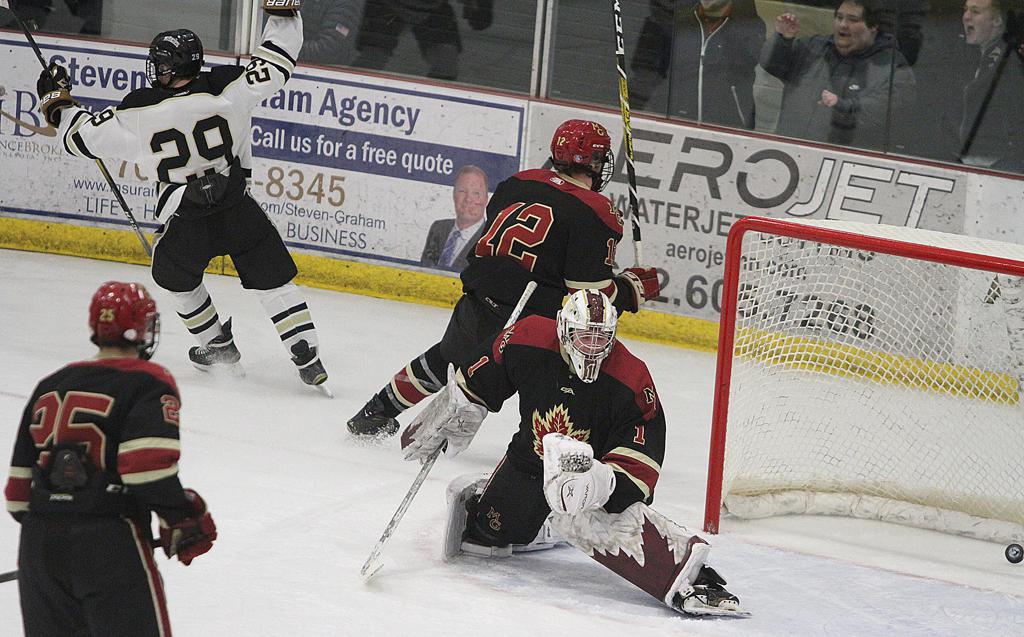 Andover senior forward Hayden Masloski gets the Huskies started with a first period goal Thursday night in Andover. The Huskies handed Maple Grove its first loss this season with a 4-0 shutout. Photo by Drew Herron, SportsEngine

After a season opening home-and-home series that it split with Blake, it had been nearly a month since Andover had taken the ice in front of its home fans. The Huskies (5-1-0, 2-0-0) made sure the wait was worth it, as they shut out Northwest Suburban Conference rival Maple Grove 4-0.

“We were excited to play Maple Grove because the speed limit is really high,” said Andover coach Mark Manney. “It gets you out of your comfort zone. I think both teams learned a lot from tonight and we’re already looking forward to playing them again in about a month.”

Andover beat the Crimson by a combined score of 9-2 last season, and it looked like Thursday evening’s game at Andover Ice Arena would be a much closer contest. But in the minutes that followed a tenacious penalty kill against Maple Grove’s high-octane power-play unit (nine goals in 14 chances coming into the game), Andover, ranked No. 6 in the Class 2A coaches' poll, began to take control of play on the ice. 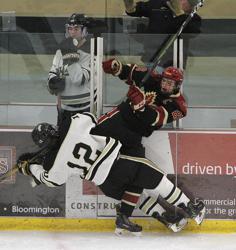 “We enjoy how Maple Grove plays because we know they play fast,” Manney said. “They have a high skill level and kept us off-balance [at times], but our guys responded to it.”

While the effects of Andover having the better of the special teams play between the two teams would be felt later on in the game, it was an even-strength marker that broke the ice. With 2:52 remaining in the first period, senior forward Hayden Masloski beat Maple Grove junior goaltender Jack Weineke cleanly.

That started off a nearly full-period of domination by the Huskies. Drawing a penalty on the Crimson (6-1-0, 3-1-0) with seven seconds remaining in the first period, the Huskies took advantage of the extra skater in the second period with a goal 1:16 into the action, with junior forward Garrett Schifsky being credited with the score.

“We do a lot of conditioning, and I think it showed today,” junior goalie Will Larson said. “It was good to get back on track.”

Andover’s third tally of the evening was the definition of gritty. After keeping a cycle alive, they worked the puck in towards the No.2-2A Maple Grove net and got it airborne. The puck then managed to sneak its way over the shoulder of Weineke for a 3-0 lead that had the home crowd roaring in approval.

The push Andover expected from the Crimson came late in the second, as Maple Grove put half a dozen shots on net over the final three minutes of action, but could not find their way through Larson.

“You can get a little scared when you don’t face a lot of action and then having some come at you,” Larson said. “But the guys played great on the other end. Couldn’t ask for much more from them.”

Some chippiness between the two teams led to coincidental minor penalties being assessed in the final minute of the second period. Those burned away without incident as the teams continued to play five-on-five into the third period.

The teams traded third-period penalties, the second of the two being assessed to Andover’s senior forward Hunter Zinda. A power play goal for the Crimson at that moment might have been the spark they needed to get back into the game.

Instead, it was a penalty kill that helped Andover seal the game. After a shorthanded two-on-one ended with senior forward Luke Kron having to be helped off the ice, senior Nate Bauer dished a turnover ahead to senior forward Gunnar Thoreson, who beat Weineke gloveside for the final tally of the game.

“The shutout was nice to have but it takes a little luck,” Manney said. “The loose pucks in front of our net just happened to find our sticks instead of theirs.”

Weineke made 35 saves in the losing effort for Maple Grove. Larson had 23 saves to finish his second shutout of the season. 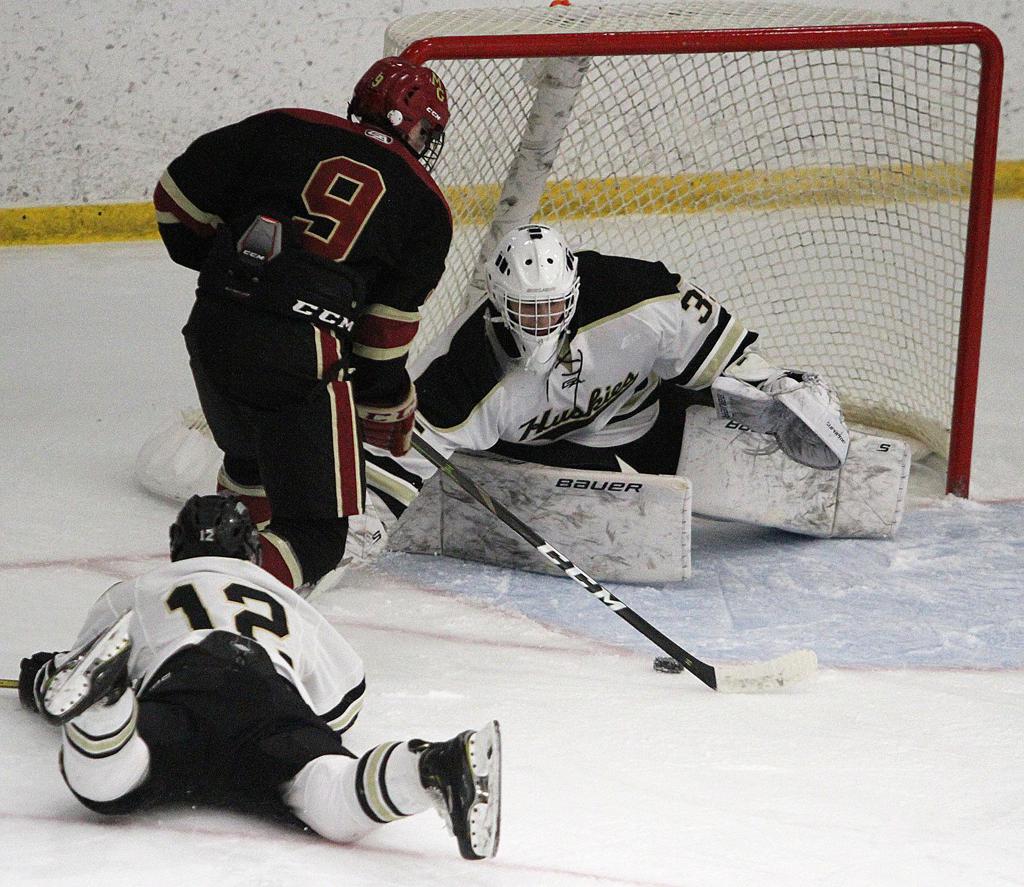 The Huskies, ranked No. 6 in the Class 2A coaches’ poll, kicked off their domination of the No. 2-2A Crimson when senior forward Hayden Masloski scored with 2:52 left in the first period. Masloski was followed onto the score sheet by junior forward Garrett Schifsky (power play goal), senior forward Luke Kron and senior forward Gunnar Thoreson (shorthanded).

Junior goalie Jack Wieneke made 31 saves in net for the Crimson. The Crimson power play, which entered the game having converted on nine of its first fourteen attempts, was held out of the net in its two chances.

Andover’s junior goalie Will Larson stopped all 23 shots he faced.