The Hornets' defense allowed only 11 shots, and cruised to victory behind a first-period goal from freshman Jimmy Clark. 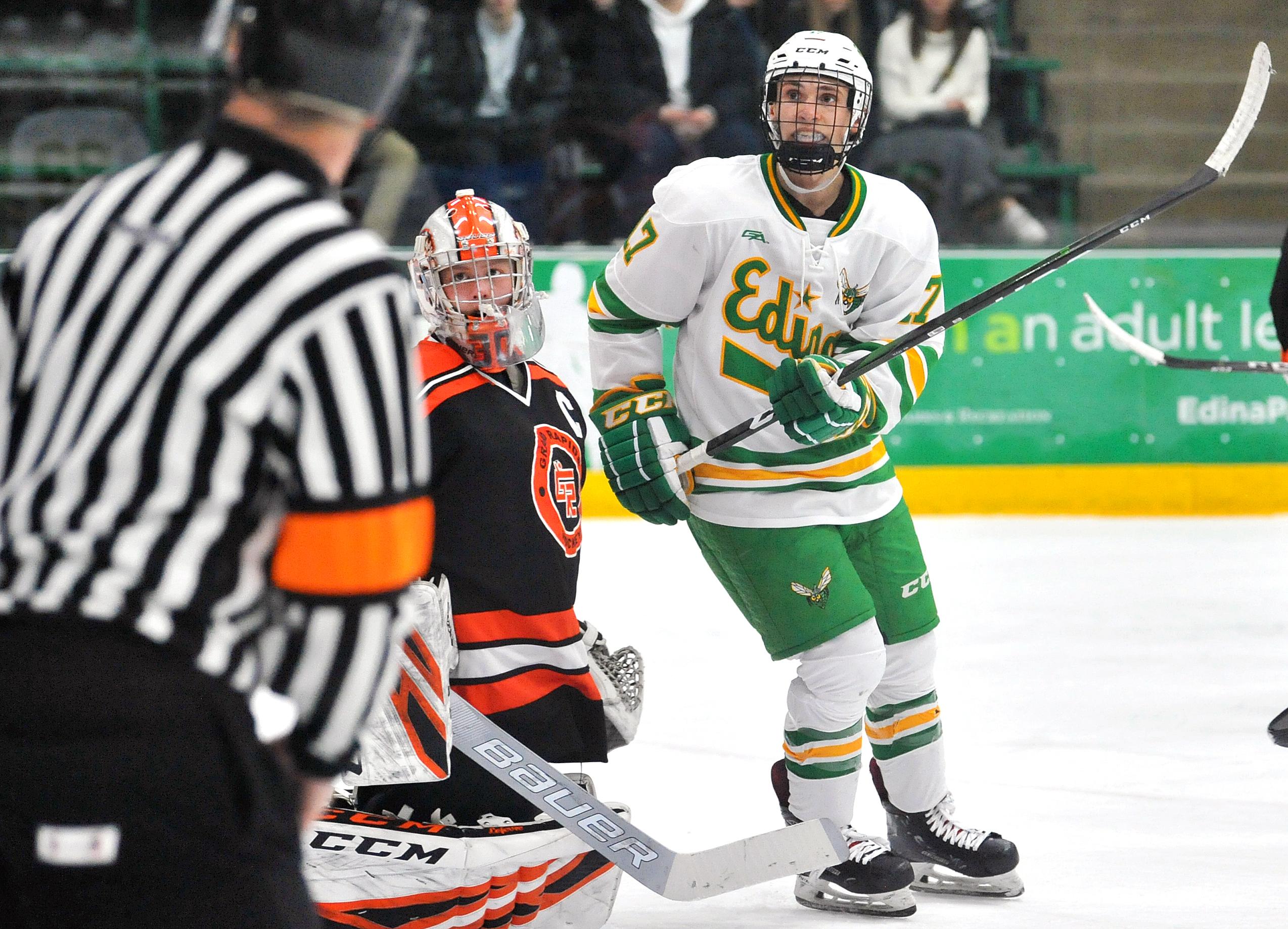 Goal scorers are a rare commodity at any level, from Pee Wees to the pros.

The exception to that rule for the past several years has been Edina, where newborns seemingly are blessed with silky mitts and laser shots. Where the water is laced with a secret light-the-lamp elixir. Where Hornets coach Curt Giles has enjoyed an embarrassment of natural born snipers.

“When you get in a situation where you need a goal, you can look down the bench and you’ve got three or four or five or six guys who can get that goal four you,” Giles said about the past several editions of the Hornets, including last season’s state Class 2A championship team.

Goals haven’t come as regularly this season for Edina, which struggled to a 2-3-1 start before reaching the .500 mark on Thursday with its 4-0 victory over Grand Rapids in the opening round of the Edina Holiday Classic at Braemar Arena.

A team that in years past scored six or more goals per game is now averaging about half that.

A freshman who leads the Hornets with five goals, Clark scored late in the first period Thursday to kickstart Edina’s offense. He was involved in several more quality chances as Edina buzzed the Thunderhawks all game.

“Oh, it’s something special to watch,” senior defenseman Jake Boltmann said about Clark’s offensive wizardry. “I know when I was his age I wasn’t anywhere near as skilled as he is.

“He makes plays out there that, sometimes, you’ve gotta look at the other guys on the bench and it’s just like, ‘Oh geez, did he really just do that?’ ”

Clark scored after corralling a loose puck in the slot and sliding to his right enough to find an opening through a maze of players. Then it was just a matter of hitting an opening the size of a dinner plate.

“He’s kind of a natural everything,” Giles said. “He knows where to put the puck. He thinks the game extremely well. And he’s only going to get bigger and stronger.”

Clark has been remarkably consistent, scoring a goal in five of the Hornets’ six games. He takes his queue from seniors such as Boltmann, who also cracked Edina’s varsity as a freshman. Boltmann considered playing junior hockey in the USHL this season, but his return to the Hornets added not only a major talent on the ice but a calming — and often hilarious — presence everywhere else.

“He’s always pushing us in the locker room when we’re getting ready,” Clark said. “He’s goofy at times, serious times also. He’s a fun guy to be around.”

It’s no coincidence Boltmann’s best game of the season also was Edina’s. The Hornets not only maintained pressure in the Grand Rapids end for much of the game, they also limited the skilled Thunderhawks to only a handful of quality chances.

“That was probably one of our best all-around games so far,” Giles said. “We’ve had good spurts, but that was pretty much the best full game.”

While Edina’s stock is on the rise, Grand Rapids is struggling to rekindle the early season magic that led to a 3-0 start, including victories over highly regarded Benilde-St. Margaret’s and Minnetonka. Thursday’s loss dropped the Thunderhawks to 3-3-0.

“We did not play with any jam, any energy,” Grand Rapids coach Wade Chiodo said. “Edina took it to us all game and guess what, it showed in the scorebook. You know what, it is a reality check.” 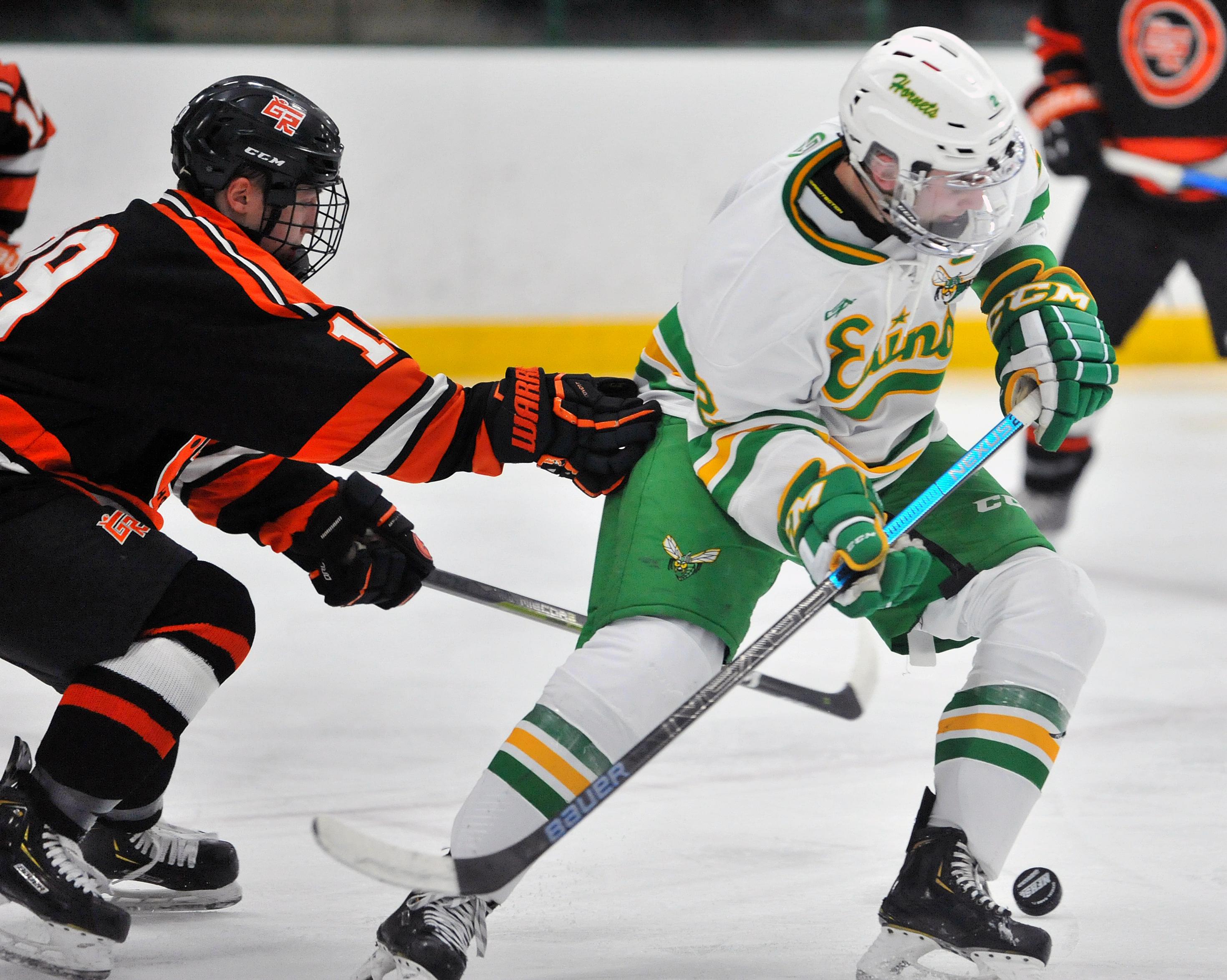 Freshman Jimmy Clark scored his team-leading fifth goal of the season and junior Loudon Hogg made 11 saves to record the shutout as defending state Class 2A champion Edina beat Grand Rapids 4-0 on Thursday night at Braemar Ice Arena in the opening round of the Edina Holiday Classic.

Clark scored the lone goal of the first period with 19 seconds left on a blast from the slot. Senior defenseman Jake Boltmann, a varsity regular since he was a freshman, put the Hornets ahead 2-0 2:49 into the second period.

The victory boosts Edina’s record to 3-3-1 while Grand Rapids, which started the season with three consecutive victories, lost its third straight to fall to 3-3-0. 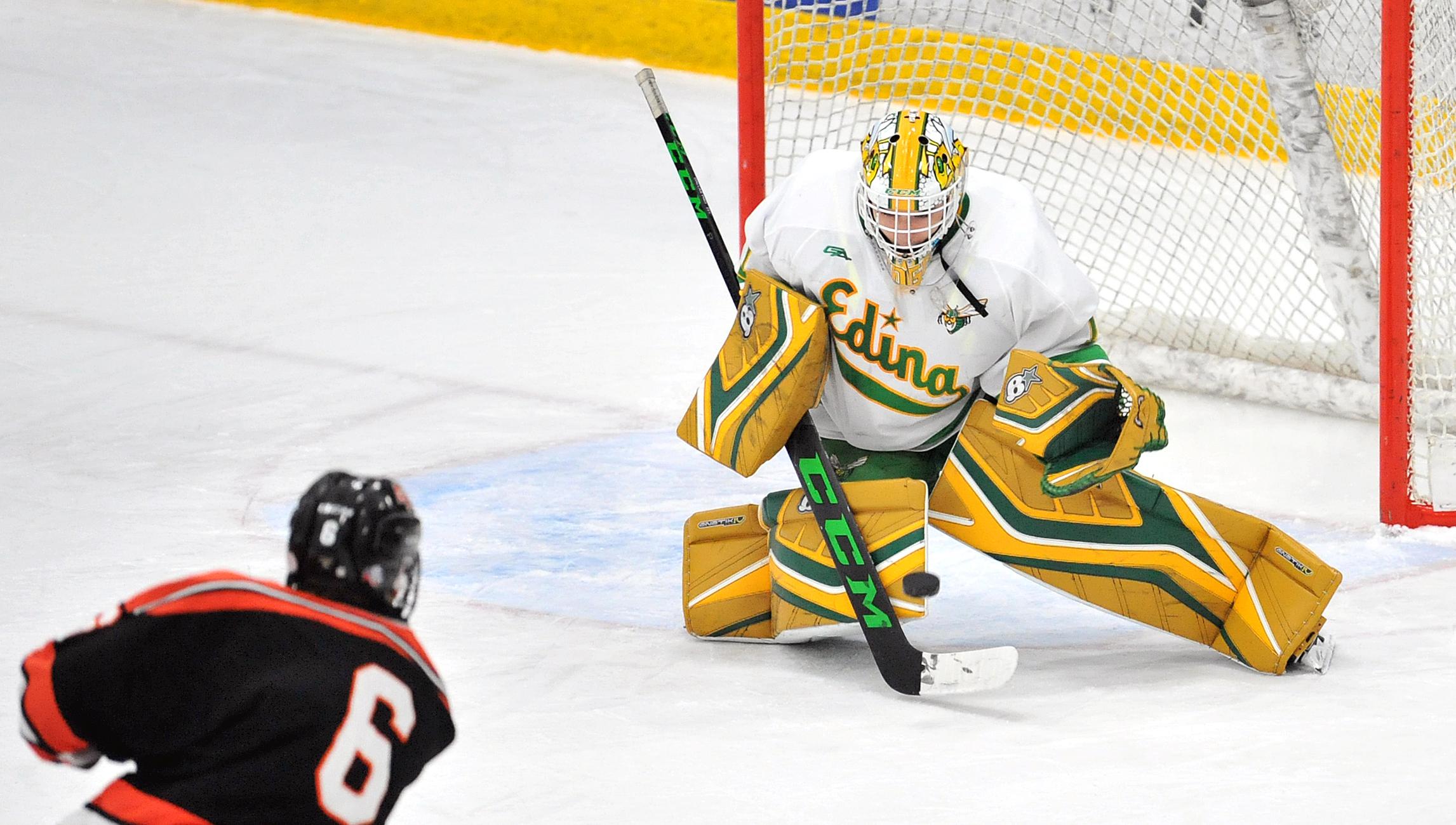 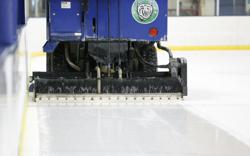