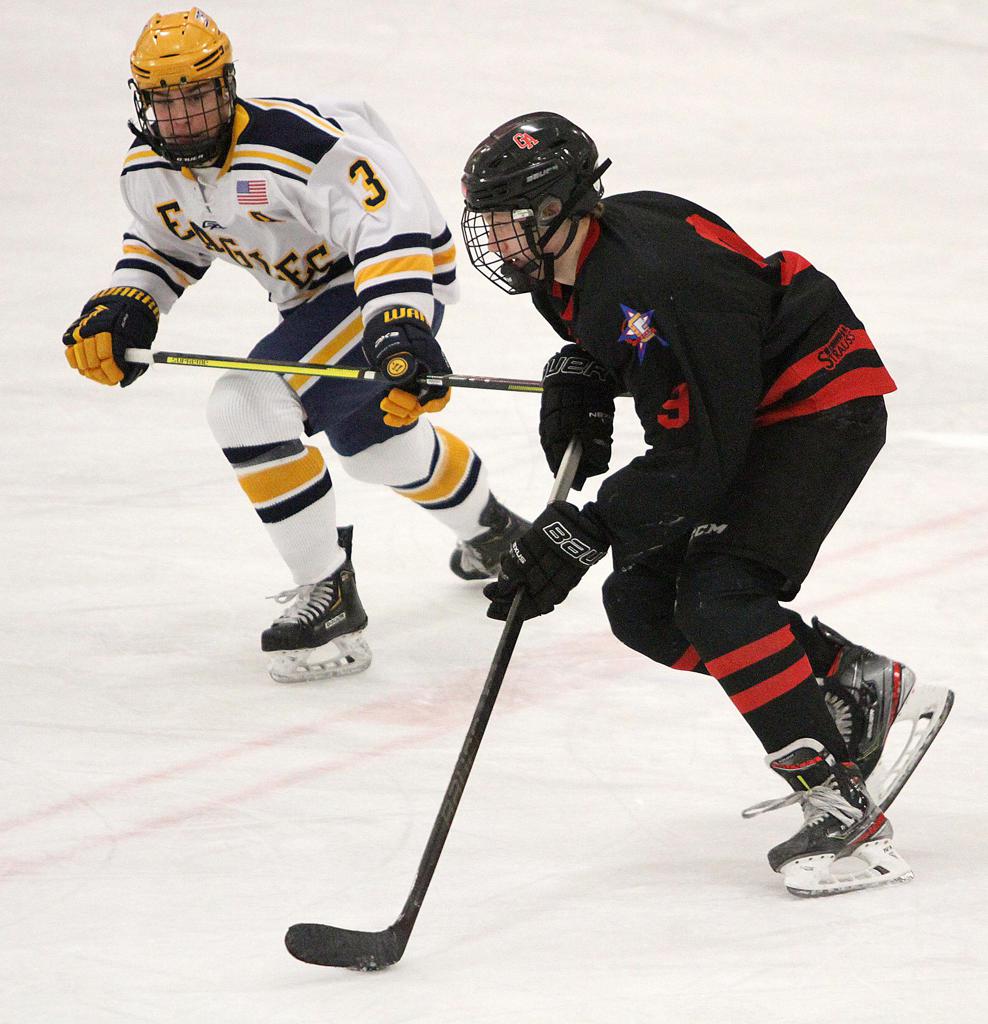 Gentry Academy started hot Thursday afternoon en route to building a 3-0 lead over Bloomington Kennedy in the first period, and when the Eagles eventually mounted pressure of their own, the Stars confidently and patiently stuck to their course.

There was no meltdown, no deviation and no doubt for the Stars.

The combination culminated in Gentry Academy defeating Kennedy 7-3 in a Silver Division quarterfinal matchup at the Herb Brooks Holiday Classic at the National Sports Center in Blaine.

A year ago, during Gentry Academy’s inaugural season, there likely wouldn’t have been that same steadfast belief in the Stars’ collective ability. But the second year tells a different story as the Stars are off to a 9-2 start (compared to 4-5 a year ago) and ranked No. 10 in the Class 1A coaches’ poll.

Above all, there is a new mindset catching fire for the Stars. 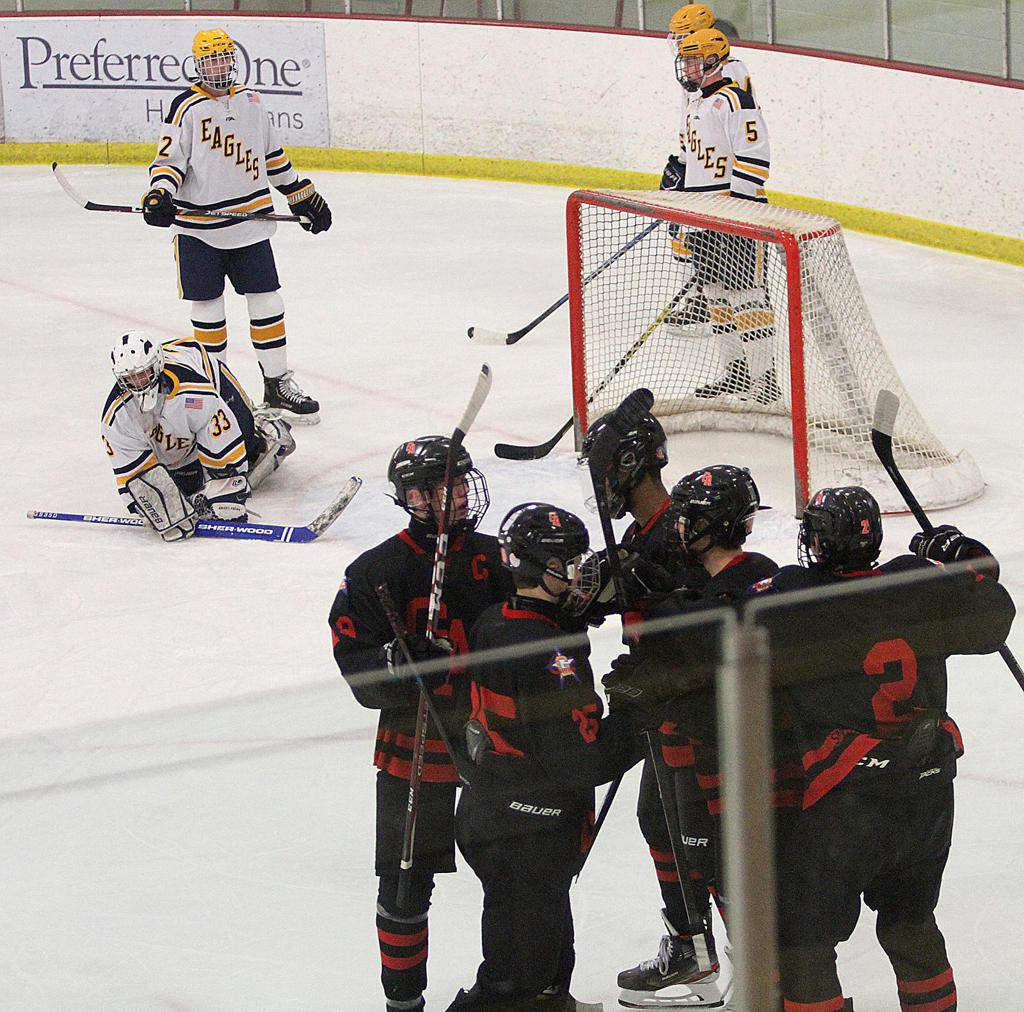 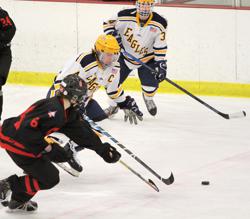 “This year we are light years ahead of where we were (last December),” said junior Damon Furuseth, Gentry Academy’s leading scorer with 11 goals. “I think we are all a lot more comfortable and playing with a lot more confidence.”

Gentry Academy, after racing to its three-goal lead in the opening period, went ahead 4-0 on Furuseth’s goal six minutes into the second period.

The Eagles, despite the deficit, held the Stars within reach with ample zone time, a relentless forecheck and physical play that threw roadblocks into the middle of the ice.

Kennedy sophomore Tyler Jost scored twice in less than a four-minute span midway through the second period. Momentum was up for grabs.

As things grew more tense, Kennedy (1-8-0, 0-1-0) tightented play along the walls and challenged Gentry Academy to muddy things up a bit. The Stars would have no part of it, however, and they walked it back towards what works for them: transition and precision puck movement.

The approach prevailed for Gentry Academy down the stretch.

“We try to stay away from that part of the game,”  Furuseth said of physically grinding it out. “We try to do what we do well, we want to score goals.”

Gentry Academy went on to record the game’s next three goals, two of which came from Barrett Hall, and the Stars were in command down the stretch.

In the third period, sustained zone time and scoring chances were not as prevalent but the Stars consistently pounced on their chances.

“When the opportunities came up, we took advantage of them,” said Gentry Academy coach Joe Cullen. “I think that was the biggest difference today.”

Last year, the Stars fielded a team of mostly freshmen and sophomores, with a few eighth graders mixed in. Now a few juniors sprinkle a roster void of any seniors.

Cullen credits the natural physical growth of his players, along with increased depth and improved goaltending as catalysts for Stars’ uptick.

“It’s night and day, the difference in a year,” said Cullen. “We have pretty much the same team as we had last year, and we were really young. This year, we expected to be better but I think maybe we are doing even better than most expectations.”

Gentry Academy used its speed and made the most of its scoring chances to skate past Bloomington Kennedy 7-3 Thursday afternoon during a Herb Brooks Holiday Classic Silver Division quarterfinal matchup at the National Sports Center in Blaine.

Barrett Hall and Daniel Yusupoff each finished with a pair of goals for Gentry Academy (9-2-0) while eight different Stars players notched at least a point. The Stars, ranked No. 10 in the Class 1A coaches' poll, led 3-0 after the opening period, and withstood stretches of heavy pressure from Kennedy (1-8-0, 0-1-0) to close out strong.

The Eagles got two goals from sophomore Tyler Jost, and one score from Kiran Haefel-Zastrow.

Kennedy goaltender Peter Vodovnik stopped 23 shots, while his counterpart Alex Timmons made 18 saves to carve out the Stars’ victory.

Gentry Academy advances to Friday’s semifinal matchup against Northfield, which knocked off Minnehaha Academy 4-3 in the preceding game on Rink 1.