Moorhead cruises past Lakeville North in Hockey for Life Classic

Senior forward Michael Overbo scored four goals for the Spuds, while goalie Hudson Hodges made 31 saves in the shutout win. 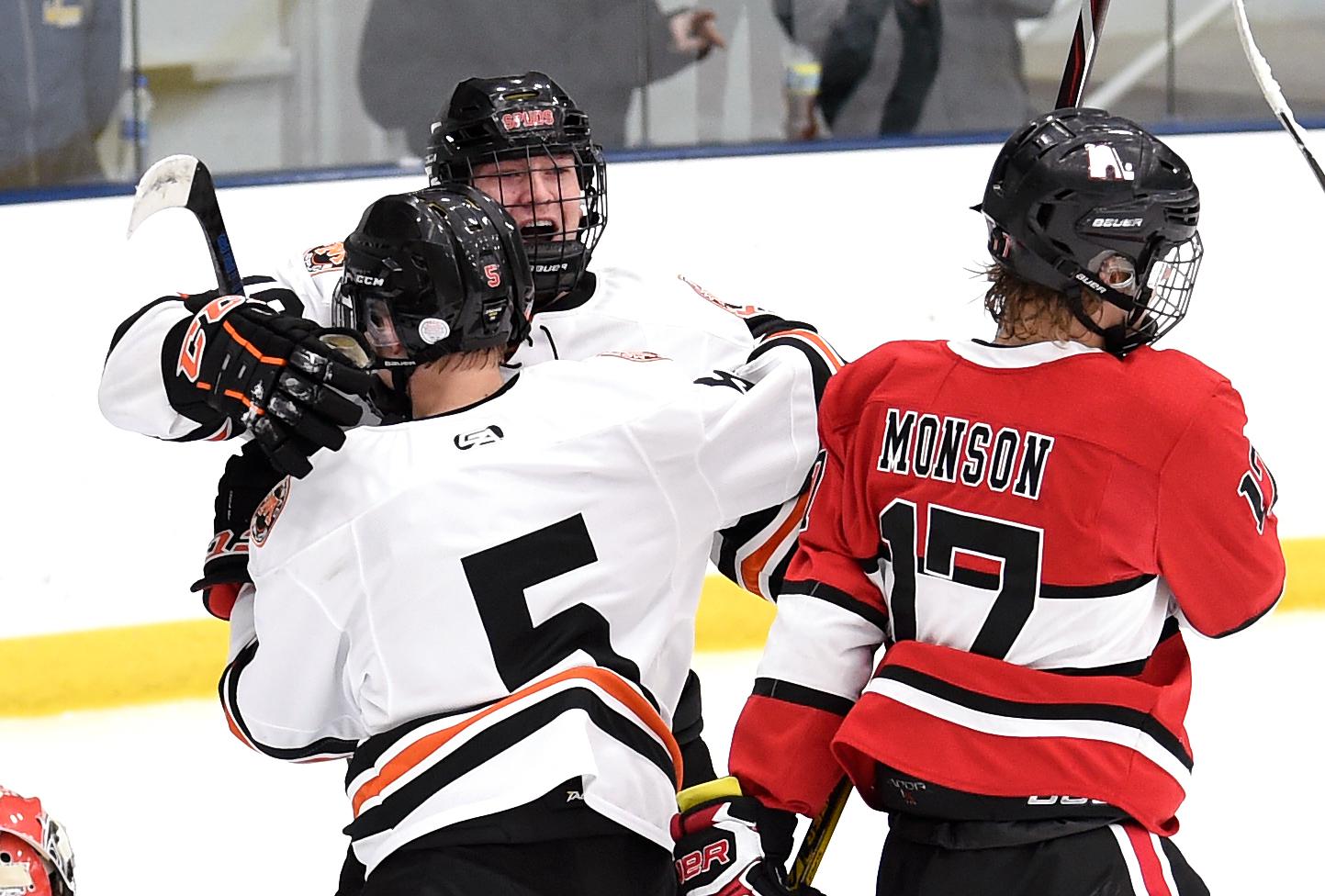 Moorhead's Michael Overbo celebrates with teammate Kai Holm (5) after Overbo scored one of his four goals on Thursday against Lakeville North. Photo by Loren Nelson, LegacyHockeyPhotography.com

When is the last time Michael Overbo had such a scoring splurge?

Gorgeous snipes and sick breakaway moves typically aren’t part of the 6-foot-1, 195-pound forward’s arsenal. Overbo doesn’t have a go-to celly. No, his game is more of a smash-and-grab affair, as in smashing opposing defenders into the plexiglass and grabbing the resulting loose pucks. 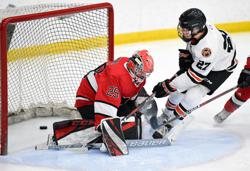 “I feel it’s kind of my role in playing the body, being physical,” Overbo said on Friday after his four-goal outburst led the Spuds to a 6-0 rout of Lakeville North in the second round of the Hockey for Life Classic tournament at Dakotah! Ice Center in Prior Lake. “Use my strength and size to get in front and put pucks away.”

One of several physical, grinding forwards on a gritty Moorhead (8-2-1, 1-1-0) team that wears out opposing teams as much as it outscores them, Overbo had four goals in 10 games entering Friday’s matchup.

“Mike plays a hard game, a fast game,” Spuds senior defenseman Luke Gramer said. “He’s got a great body he uses really well. Having a guy play as hard as he does makes it easier on us.”

Easy on his teammates, hard on the opposition. After a scoreless first period Overbo scored twice in each of the second and third periods. All four of his goals were the result of crashing the net and collecting loose pucks, although the fourth goal — which came in the final minute — was more of a long-distance snipe after a failed 2-on-1 rush.

This crash-heavy version of Moorhead is typical of northern hockey but far different from sharpshooting Spuds teams of recent vintage, most notably the one that reached the 2017 state title game. Snipe City is now Boomtown.

“I thought Lakeville did a great job and was carrying the pace of play, but as the game went our style of play kind of wore on them,” Moorhead coach Jon Ammerman said about the Panthers (6-3-1, 2-1-1), who were coming off Thursday’s 7-1 rout of the Totino-Grace. “In the second and third periods, with the way we play, the style we play, it wears on teams.”

“Not so much,” Ammerman said. “We have so many things that we are working on and concentrating on. We’re ready to kind of take that next step.”

For Moorhead to crack the top 10 in Class 2A, or reach the state tournament — or accomplish any other goal — the formula isn’t likely to change.

“There are some teams in the state that have more skill than us, we know that,” Gramer said. “But we try to rough ’em up a little bit. Gets the job done.” 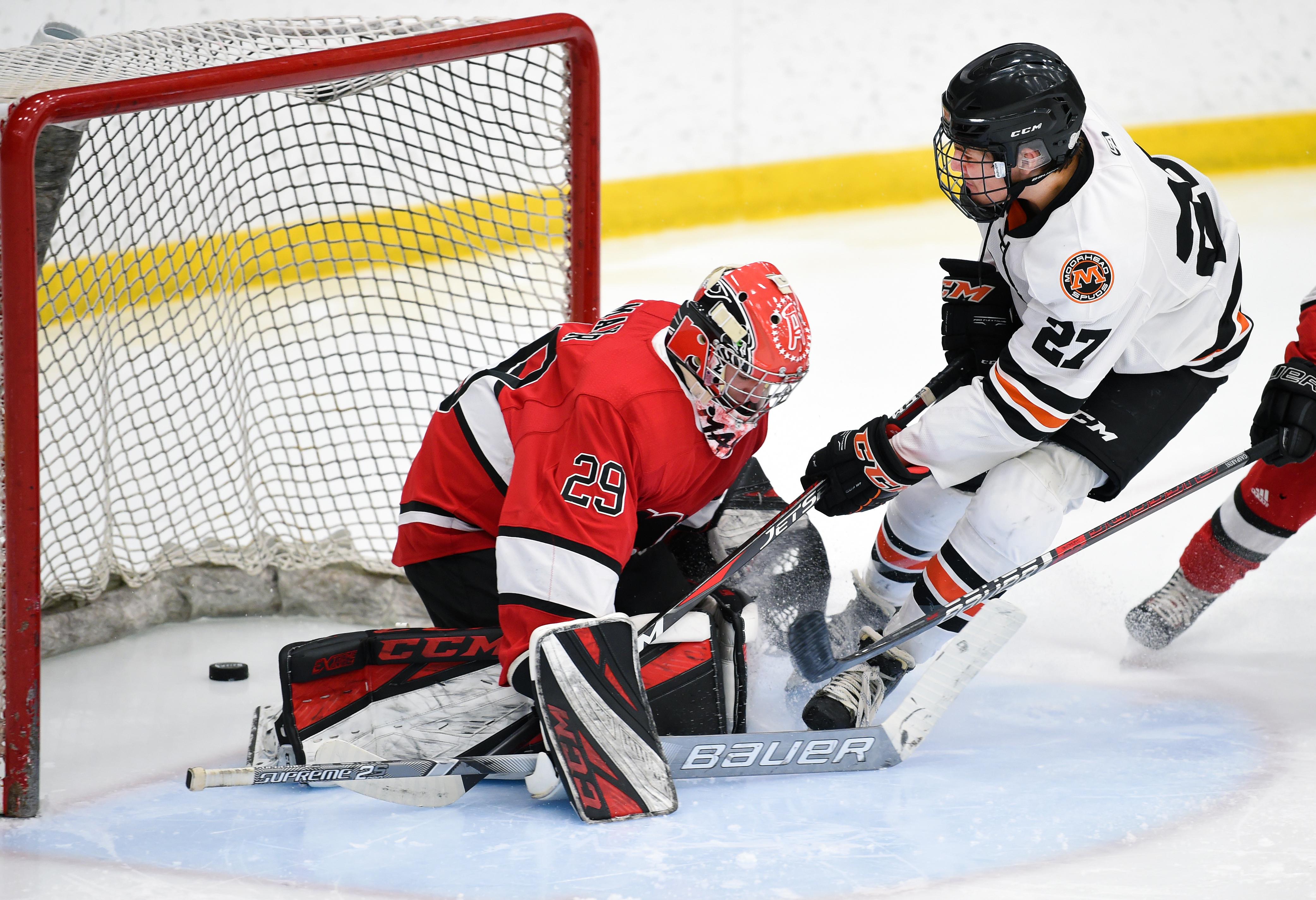 Senior forward Michael Overbo scored four goals, matching his season output entering the game, and senior goaltender Hudson Hodges made 31 saves as Moorhead beat Lakeville North 6-0 on Friday in the second day of the Hockey For Life Classic tournament at Dakotah! Ice Center in Prior Lake.

The 6-foot-1, 195-pound Overbo, who had four goals in 10 games entering Friday’s matchup, scored all four of his goals against the Panthers off rebounds, with two coming in each of the second and third periods. His final goal, a long-range snipe from the slot, came with 17 seconds remaining and punctuated a dominating third-period performance for the unranked Spuds (8-2-1, 1-1-0).

Caden Triggs scored twice for Moorhead, including the opening goal when he jammed a loose puck underneath Lakeville North goaltender Caleb Mayer. The game was scoreless into the second period when Triggs scored 2:57 into the stanza.

The victory was the second in as many days for Moorhead, which beat Edina 3-2 in overtime in the opening round of the three-day, eight-team, round robin event.

Unranked Lakeville North (6-3-1, 2-1-1) had several good scoring chances but Hodges, one of the state’s premiere goaltenders, had little trouble making the initial saves and had plenty of help from his defensive corps snuffing out second-chance opportunities.

Mayer finished with 29 saves for the Panthers, who were coming off Thursday’s 7-1 rout of Totino-Grace.