The Raiders' junior Jonathon Peine tallied the game-winner as time expired in the second period. 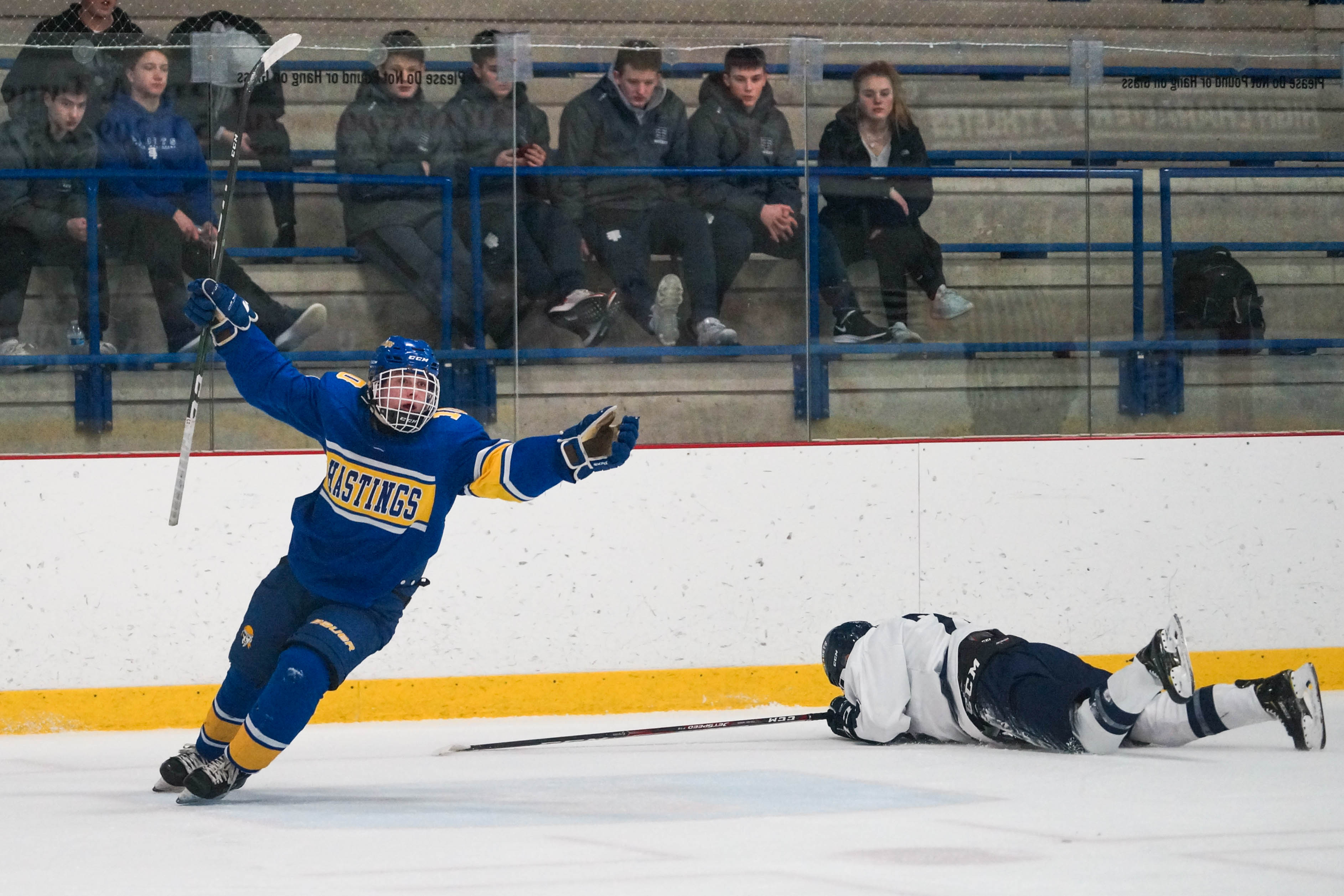 Hastings' Jonathon Peine celebrates an empty-net goal, his second of the game, in a 5-1 win against St. Thomas Academy Jan 9. Photo by Korey McDermott, SportsEngine

Before Thursday’s meeting, St. Thomas Academy had won each of the past five meetings with its Metro East Conference rival dating back to the 2014-15 season. The Cadets dominated on the scoresheet, outscoring Hastings 36-4 with a pair of shutouts in those past five games.

The newest entry into the book between these two squads shifted from recent history, however, with a 5-1 Hastings victory Thursday night at St. Thomas Ice Arena in Mendota Heights.

“They’re always very, very tough to beat,” said Hastings coach Adam Welch. “We haven’t beaten them in 20 years or something like that, I heard. It’s ginormous for us and our program.” 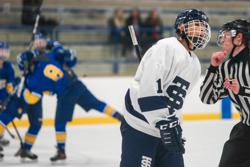 The Raiders (10-3-0, 4-1-0) succeeded with a late-period goal and put a couple cherries on top of their victory with two empty-netters. They took a 1-0 lead in the first period on sophomore Jake Harris’ sixth goal of the season.

That play started with a loud bang as the puck was sent up the ice and caromed off the boards at center. The puck bounced right toward a streaking Harris, who went with the top-shelf, backhanded shot on the blocker side.

The Cadets answered 2 minutes, 56 seconds later when senior defenseman Noah Rauschenberger scored his first of the season for a power-play tally.

But it was the goal with 3.2 ticks left on the clock in the second period that gave Hastings all the momentum along with the 2-1 lead headed into intermission. Senior Chase Freiermuth took the puck toward the corner to the right of the Cadets goalie and made a heads-up pass to his fellow winger, junior Jonathon Peine at the top of the goalmouth. Peine finished the bang-bang play for the first of his two goals in the game (adding an empty-netter).

For Freiermuth, it was his team-leading 18th assist. He said he knew he was running short on time and had to force the puck to the net somehow.

“My linemate, Chase Freiermuth, he goes wide a lot,” Peine said. “So I knew I had to take the middle and split the D.”

Both players are also very aware of the not-so-great history against the Cadets. That’s why the goal was such a lift headed into the final period.

“After we scored that, I was like, ‘OK, now we actually have a chance,’” Peine said. “Because St. Thomas has always whupped up on us pretty good our whole lives.”

Junior Jax Schauer extended the lead to 3-1 with a power-play goal in the third period. The Raiders are now 14-for-28 (50%) with the man advantage this season.

Raiders junior goaltender Tyler McCarville made 24 saves to improve to 7-3-0.

For St. Thomas Academy (5-7-2, 0-1-1), a team that’s been to the Class 2A state tournament each of the past three seasons after winning five Class 1A state titles, the loss extended its losing skid to three games.

Freiermuth recalled the game against St. Thomas Academy from his sophomore year when the Raiders were dealt a 12-1 blow at the St. Thomas rink.

“It just feels great,” Freiermuth said. “We’ve gotten destroyed by them every single year for how long. It’s nice to be on the other end of that.”

The win also comes at a time when Welch, Freiermuth and Peine all acknowledged the Raiders weren’t playing their best hockey. They’d lost two-of-their last three games, 6-2 to Bloomington Jefferson and then a 5-2 loss at Champlin Park on Saturday.

The Raiders are looking to follow up last year’s solid 19-4-1 regular-season run that ended with a Section 1, Class 2A semifinal loss to Lakeville South.

“It felt like last year we had to win as many games as we could to kind of prove ourselves and believe in ourselves,” Welch said. “Then this year, it’s more about building toward playoffs… and not so much worrying about having to try to scrap and claw and win every game that we can.”

Getting the victory Thursday was definitely a bounce-back game, according to Freiermuth. They’ve been talking for the past couple of weeks about getting the team back on track when, even heading into the holiday tournament, the Raiders weren’t playing at the same level they had at the start of the season, according to Welch.

Some good practices lately are also starting to translate to good results on the ice, Welch added.

“They bought in and they decided to play together and as a system,” Welch said, as loud cheers could be heard from his team in the locker room after the game. “You could tell they’re excited, right?” 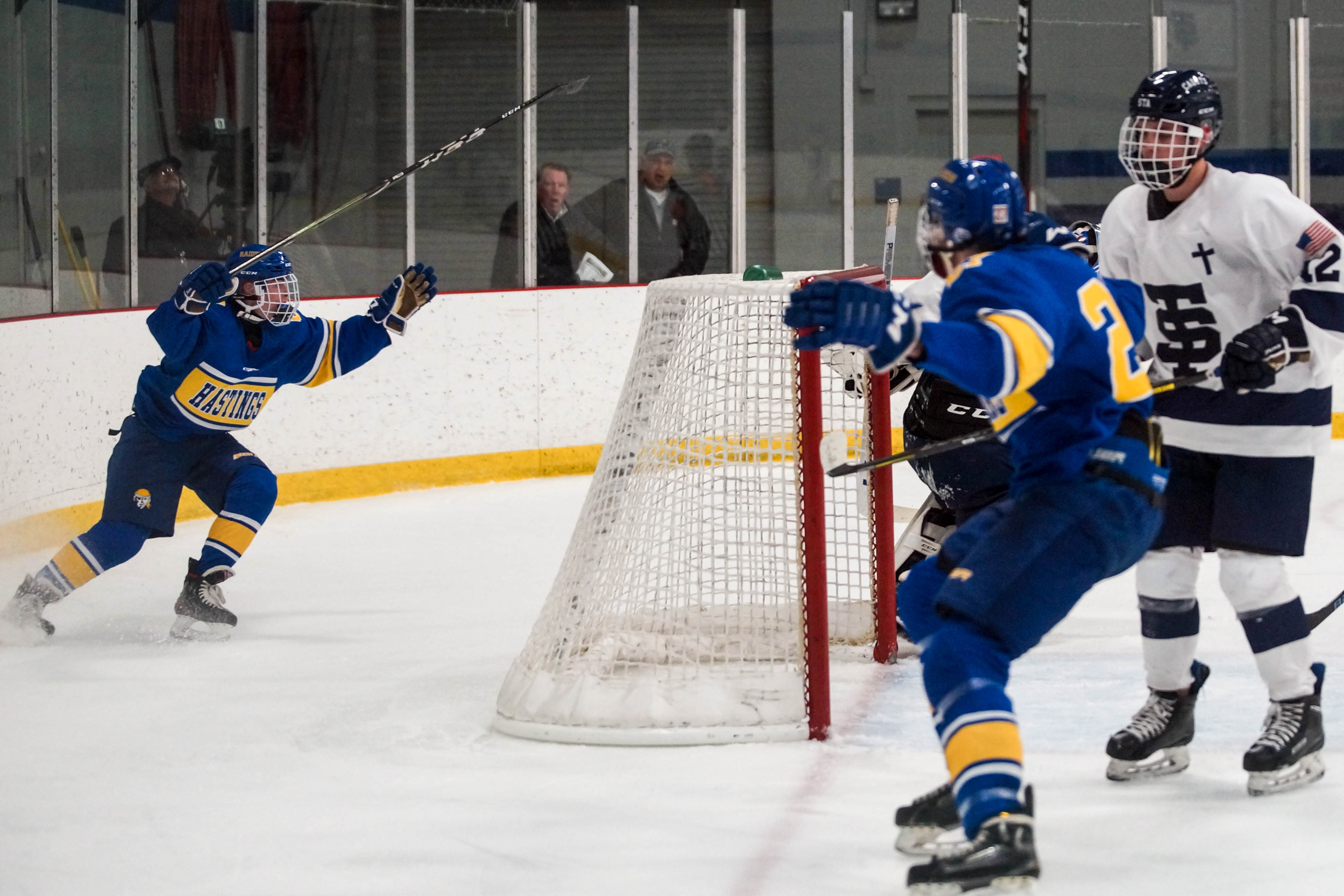 Hastings took a 1-0 lead with a pretty backhanded shot from sophomore Jake Harris in the first period. Then the Raiders went up 2-1 in the final few seconds of the middle period when the two wingers on the team’s top line combined for a goal.

With a pair of empty-net goals, it all ended with the Raiders beating St. Thomas Academy 5-1 in a Metro East Conference tilt Thursday at St. Thomas Ice Arena in Mendota Heights.

Raiders junior Jax Schauer scored his sixth goal of the season, on the doorstep off of a rebound 50 seconds into a third-period power play to give the Raiders a 3-1 lead. It’s the first power-play goal in the past three games for the Raiders. They’re now 14-for-28 (50%) with the man advantage this season.

The victory gets the Raiders back on the winning track after losing two-of-their-past-three games. They came into the game sitting tied for second place in the conference standings. 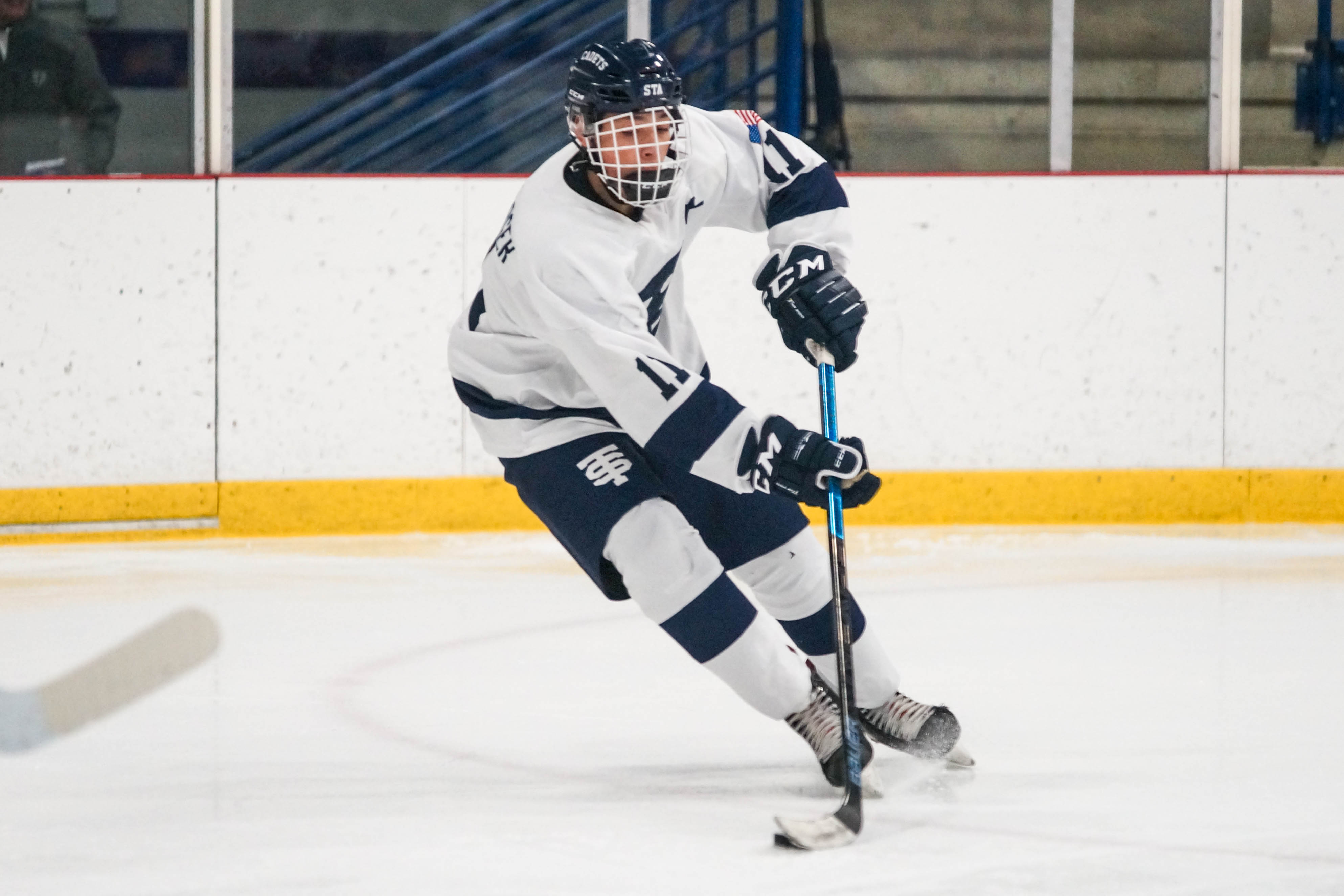