Owen Meeker netted a pair of goals for the Warriors, who recorded their 16th win of the season. 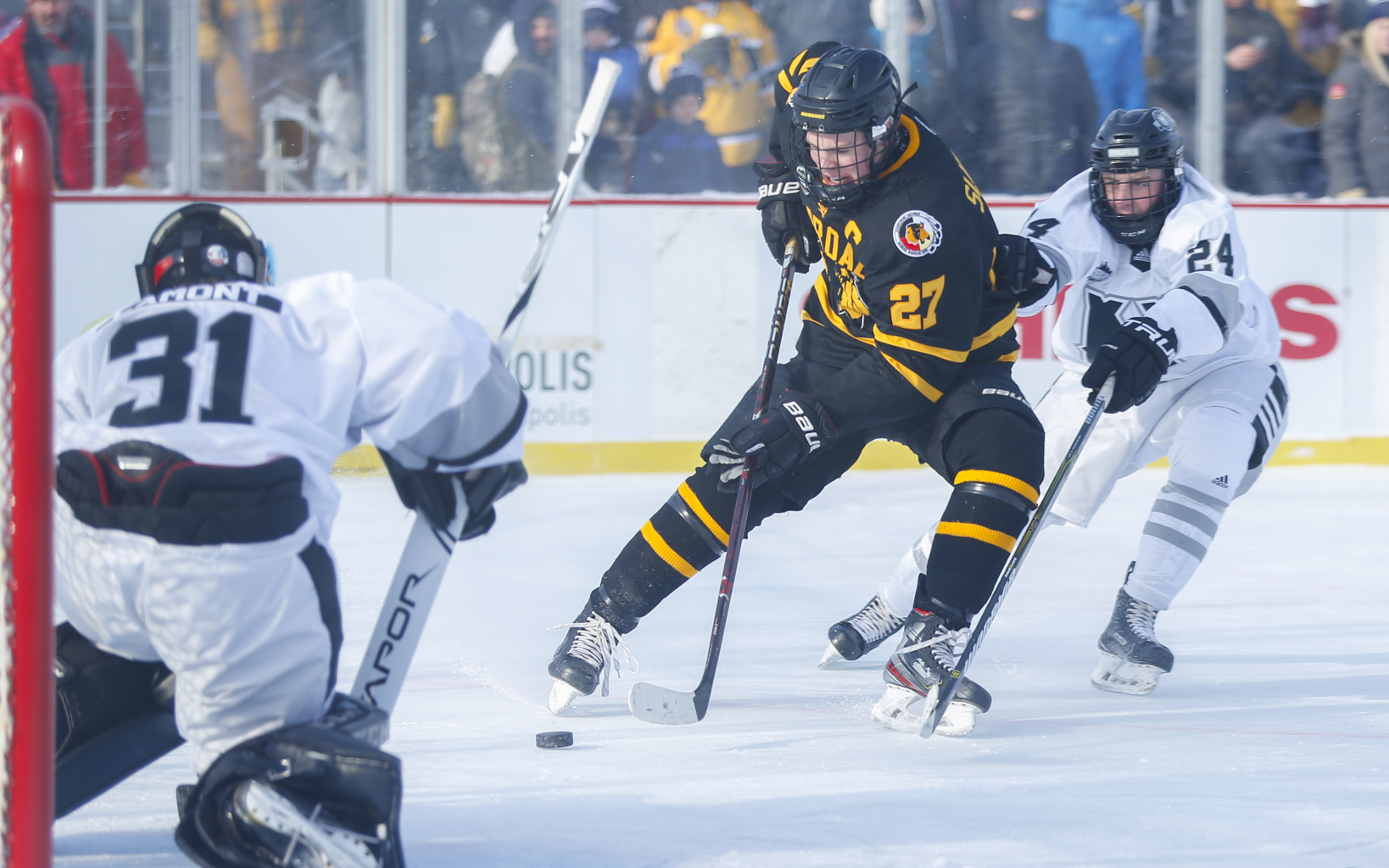 Warroad moms, dads, grandparents, little kids — lots and lots of little kids — and luminaries such as former Olympians Dave Christian and Henry Boucha all were front and center for the spectacle that is Hockey Day Minnesota on Saturday in Minneapolis.

Which begs the question, who’s left 380 miles to the north, you know, keeping an eye on things in the tiny Canadian border town?

“I couldn’t believe it, I looked up in the stands and it was all black and gold and red, white and blue,” Warroad coach Jay Hardwick said after his Warriors beat Minneapolis 5-1 at Parade Stadium. “It’s probably pretty quiet in Warroad today.”

With eight youth hockey teams and some of the biggest names in state hockey history cheering them on, the Warriors showcased the smooth skating and deft passing that has kept them perched near the top of the state Class 1A coaches’ poll all season.

“We were really looking forward to this,” said Warroad’s Grant Slukynsky, a senior who ranks second in the state in scoring with 61 points, three behind Red Lake Falls’ Zak Kennett. “And I think the guys really enjoyed it.”

Gusting winds and bouncing pucks forced the No. 3-1A Warriors (16-1-0, 6-1-0) to simplify their game, a tough thing to do for players intent on making a good impression for the television cameras beaming the game to a regional audience.

“I would say a couple of times today we tried to be too cute with the puck,” Slukynsky said. “These are the type of games we just have to fire pucks on net.”

Slukynsky’s luxurious backyard rink was featured during the Fox Sports North broadcast, and he said playing in the shadow of Minneapolis’ skyline was more or less like playing in his backyard. Minus the skyline, of course.

“My dad has been making it probably since I was two years old,” said Slukynsky, who has committed to play at Northern Michigan. “We always have a couple guys over on Sundays, off days, just go out there and have fun and skate.”

Slukynsky’s rink rat chemistry with linemate Jayson Shaugabay, the state’s top-scoring freshman, was evident, and Shaugabay’s second-period goal on a pretty three-way passing play put the Warriors ahead 3-0 in the second period.

Minneapolis (7-8-2) goaltenders Cole Kloek and Alex Lamont shared the playing time, and both had moments of brilliance. Lamont was particularly sharp on a third-period stop on Slukynsky, who was held without a goal.

“Every period it seemed like there were a couple of chances where I was ready to raise my arms and I turned to somebody and said, ‘Did he just save that?’ ” Hardwick said.

Minneapolis senior captain Ben Murray scored to end Warroad’s shutout bid in the third period, then lingered on the ice for several minutes before being forced off by a revving Zamboni.

“Not very many people get this opportunity,” Murray said. “So for us to be able to live it was unreal.” 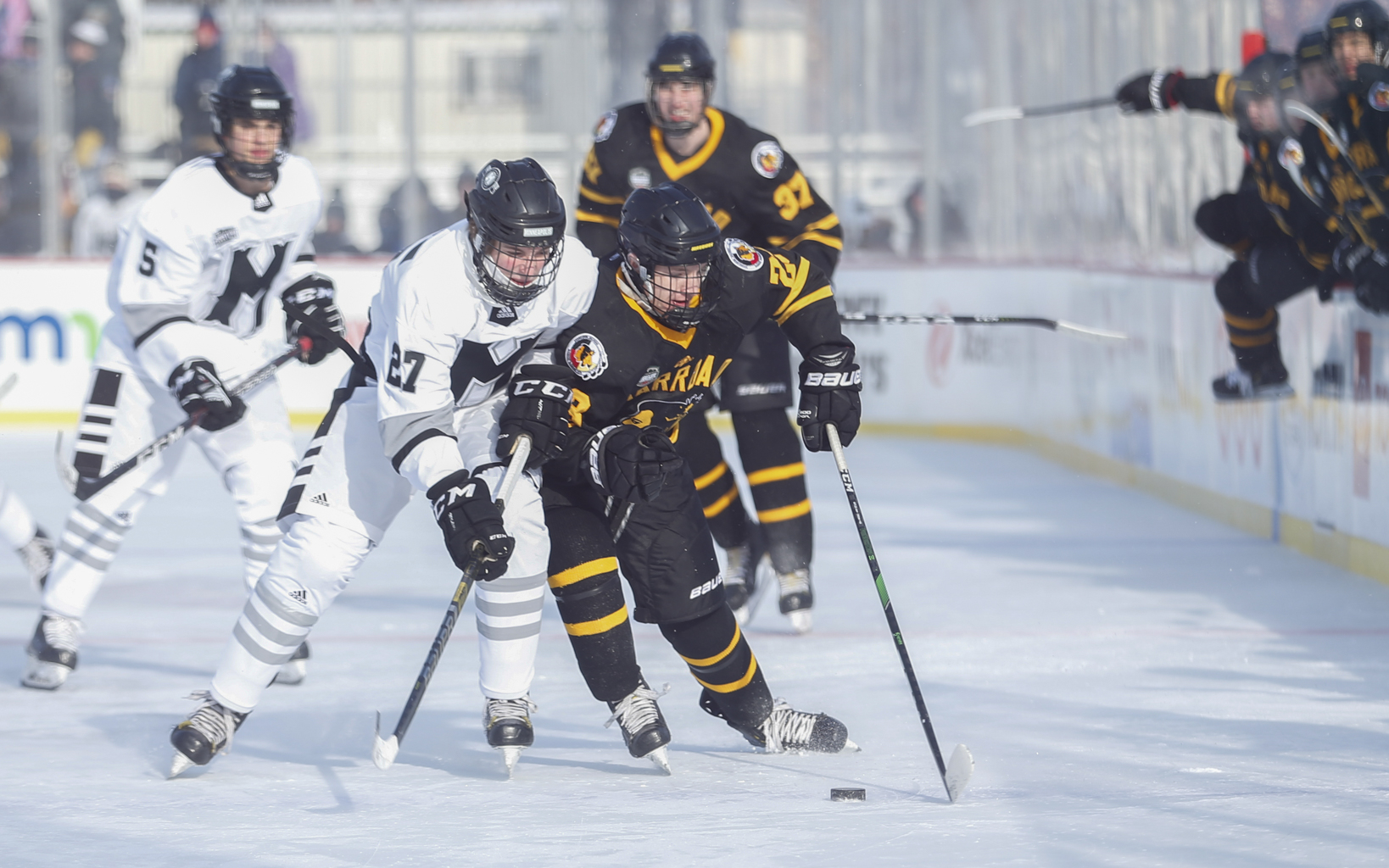 Warroad's Owen Meeker (23) tangles with Minneapolis' Evan Grimm (27) as he enters the offensive zone Saturday morning. Meeker had two goals and an assist in the Warriors’ 5-1 victory over Minneapolis at Parade Stadium. Photo by Jeff Lawler, SportsEngine

Owen Meeker scored twice and Zach Foster made 18 saves as Warroad eased past Minneapolis 5-1 on Saturday morning in a Hockey Day Minnesota matchup outdoors at a blustery Parade Stadium in Minneapolis.

Meeker opened the scoring 6:34 into the first period, and Anthony Foster stripped the puck from a Minneapolis player at center ice and breezed in for a breakaway goal to put the Warriors (16-1-0, 6-1-0) ahead 2-0 at the first intermission.

Jayson Shaugabay, the state’s top freshman scorer, notched a second-period goal for Warroad, ranked No. 3 in the Class 1A coaches' poll, to boost his season totals to 12 goals and 38 points.

Legendary Warroad players Dave Christian and Henry Boucha were in attendance, as was former Minneapolis Southwest star Tom Chorske, who holds the distinction of being the state’s first Mr. Hockey award winner. 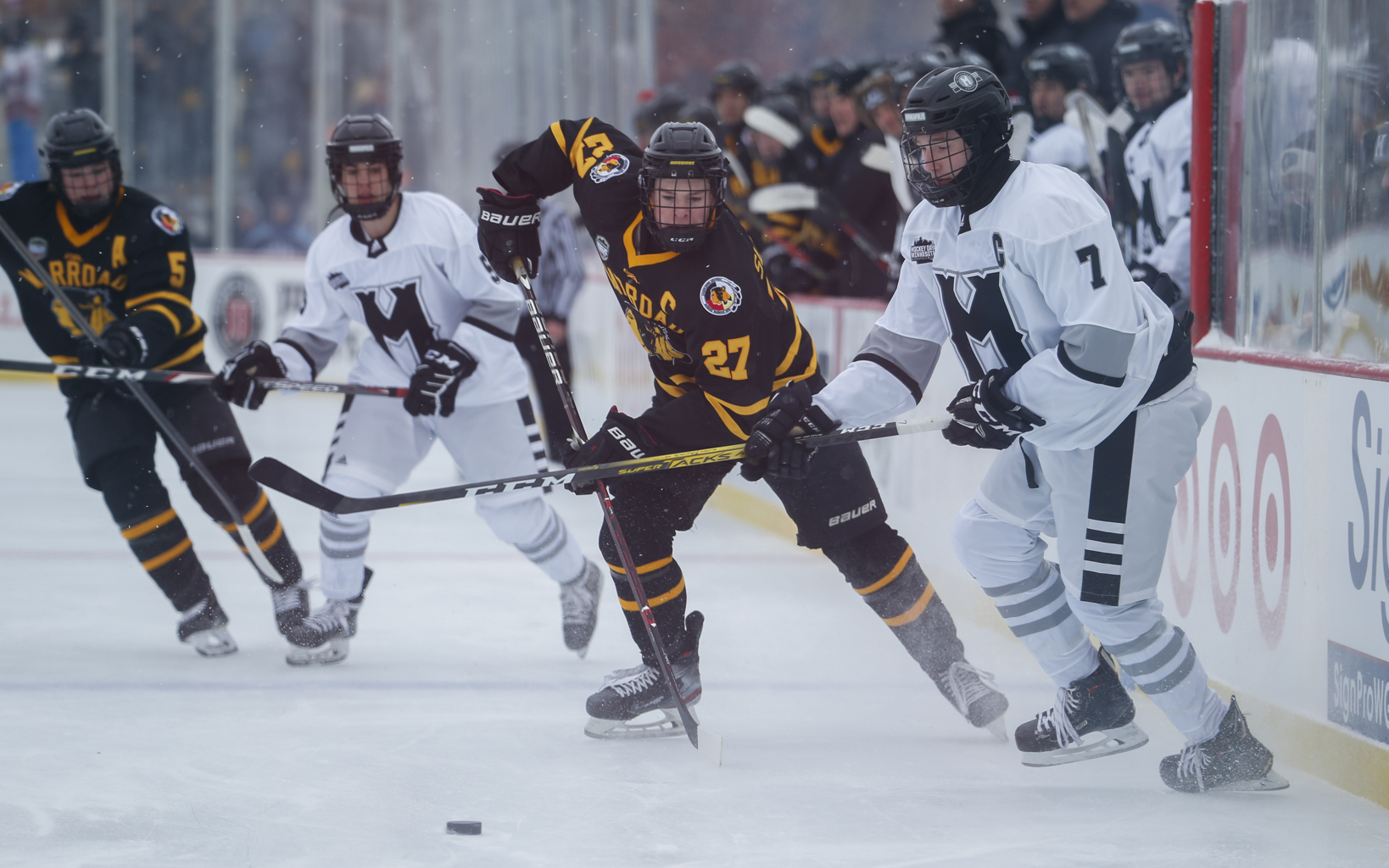 Minneapolis' Ben Murray (7) chips the puck into the corner against Warroad Saturday morning at Parade Stadium. Murray scored Minneapolis’ goal in its 5-1 loss to the Warriors. Photo by Jeff Lawler, SportsEngine