With Joe Miller's goal, the Bears defeated the Bengals in their afternoon Hockey Day Minnesota matchup in Minneapolis. 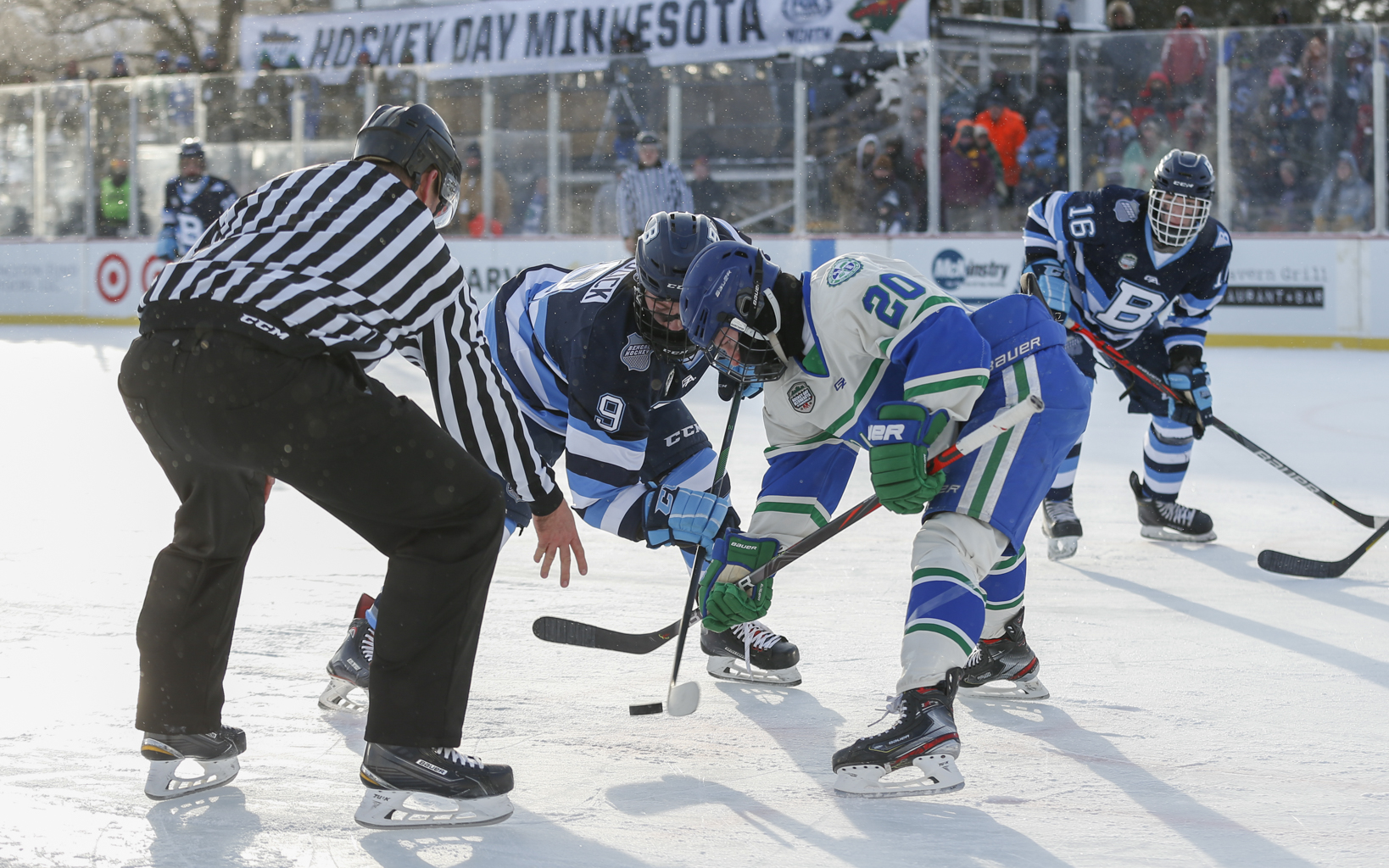 Blake’s Joe Miller (20) faces off against Blaine's Zach Buzick (9) during the afternoon game of Hockey Day Minnesota. Miller scored the game-winner for the Bears in their 3-2 victory over the Bengals. Photo by Jeff Lawler, SportsEngine

Joe Miller woke up Saturday morning in a state of disbelief.

After spending months watching the screw-by-screw, board-by-board construction of every hockey player’s dream playground across the street from his high school, Miller came to the fuzzy realization his excruciating wait was over.

“It was kind of surreal that today was actually the day we were finally going to come out here and play,” Miller said after scoring the winning goal late in the third period in Blake’s 3-2 Hockey Day Minnesota triumph over Blaine at Parade Stadium in Minneapolis. “I made sure I soaked it all in and enjoyed the experience.”

Adding to the fun was the Jack Sabre shot from the slot that deflected off Miller’s stick, then his shin pad, on its way to the goal.

Adding to the fun was the Jack Sabre shot from the slot that deflected off Miller’s stick, then his shin pad, on its way to the goal.

“It’s kind of lucky that it ended up in the back of the net, but pretty cool,” said Miller, a junior forward who has committed to Minnesota.

The game played in falling temperatures (single digits for most of the game) and gusting winds presented its challenges. Blake coach Rob McClanahan, a member of the 1980 U.S. Olympic “Miracle” hockey team, said the conditions forced him to switch out of Blake’s usual exciting, freewheeling, puck possession style to a more mundane approach.

“We dumped it, and we chased it,” said McClanahan, a disciple of legendary coach Herb Brooks. “I abhor that style, generally. But we found a way to make it successful.”

The game appeared destined for overtime before Miller’s goal, and again when Blaine standout Carsen Richels gathered the puck in the slot with less than 2 minutes remaining. His point-blank shot was stopped by Blake goaltender Aksel Reid.

“You work for the look, and sometimes it goes and sometimes it doesn’t,” Blaine coach Chris Carroll said. “Pucks were bouncing all over the place. And if they were flat they would just go really fast.”

Carroll likened the atmosphere — multiple firepits, a beer garden, music blasting and a general air of excitement — to that of another great Minnesota get-together.

“It’s like playing a hockey game at the Minnesota State Fair or something,” he said. “I feel like we were in the middle of the midway.”

“Funnest game of my life,” he said. “Having a chance to play on Hockey Day, it’s something every kid dreams of in Minnesota.

“Having the Minneapolis skyline in the background, to play in my home city, it was just awesome,” Svenddal said. “These are moments that I’ll remember forever.” 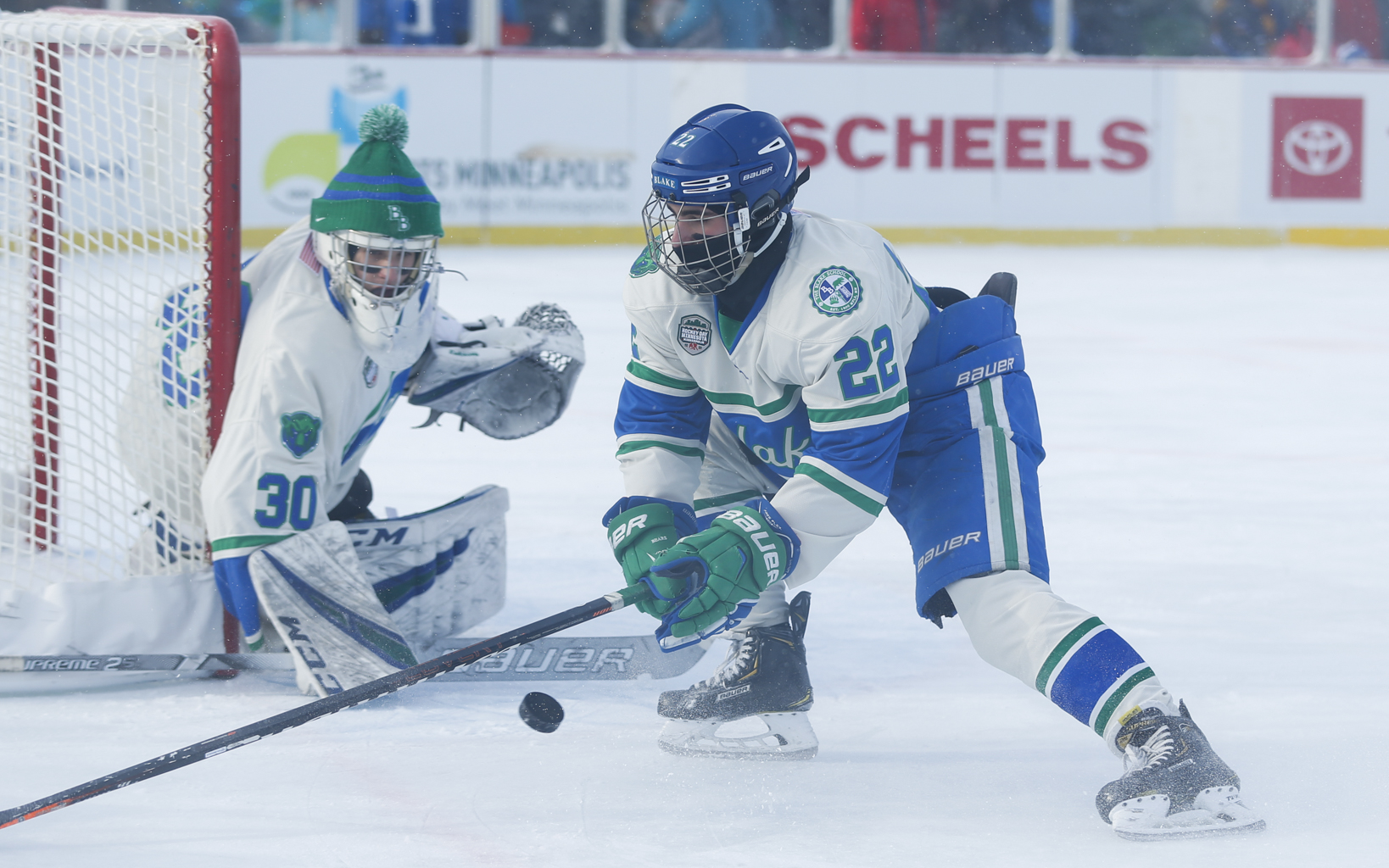 Joe Miller’s deflection with 5:34 remaining in the third period lifted Blake past Blaine 3-2 on Saturday afternoon in a Hockey Day Minnesota matchup outdoors in blustery, single-digit temperatures at Parade Stadium in Minneapolis.

Miller, a junior who leads the Bears in scoring with 17 goals and 38 points, said the puck deflected off his stick and shin pad before sailing into the Blaine net.

Blaine’s Cole Hansen opened the scoring in the game’s opening minute, firing a short-angle shot over the shoulder over Bears goaltender Aksel Reid.

Blake, ranked No. 8 in the Class 2A coaches’ poll, was playing in the shadow of its high school across the street. The Bears (13-4-0, 3-0-0) took a 2-1 lead into the third on second-period goals by Gavin Best and Brett Witzke.

Blaine’s Ben Wallraff tied it at 2-2 early in the third on a deflection in the slot.

Blaine  (10-6-0, 7-1-0) had a prime opportunity to tie the game in the final two minutes when Carsen Richels, a New Hampshire commit and 42-goal scorer last season, was open in the slot when he collected a pass and fired a low shot that Reid stopped.

Reid finished with 26 saves, while Ryan Wallin had 37 stops for the Bengals. 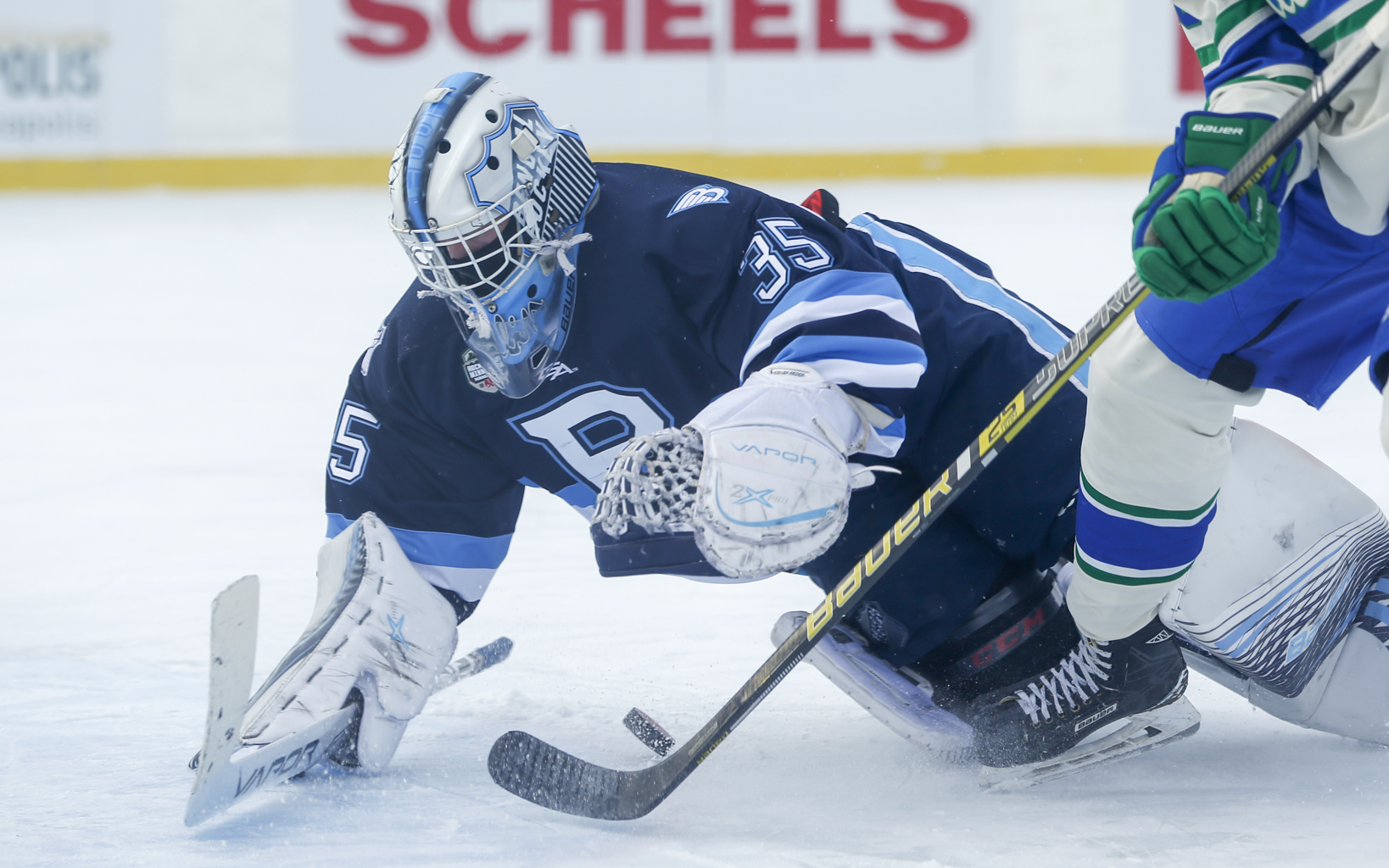 Blaine’s Ryan Wallin (35) dives for a loose puck after making an acrobatic save against Blake Saturday afternoon. The Bengals fell to the Bears 3-2 at Parade Stadium. Photo by Jeff Lawler, SportsEngine