Warroad, ranked No 3 in Class 1A, beat host Minneapolis 5-1. But participants saw beyond the scoreboard. 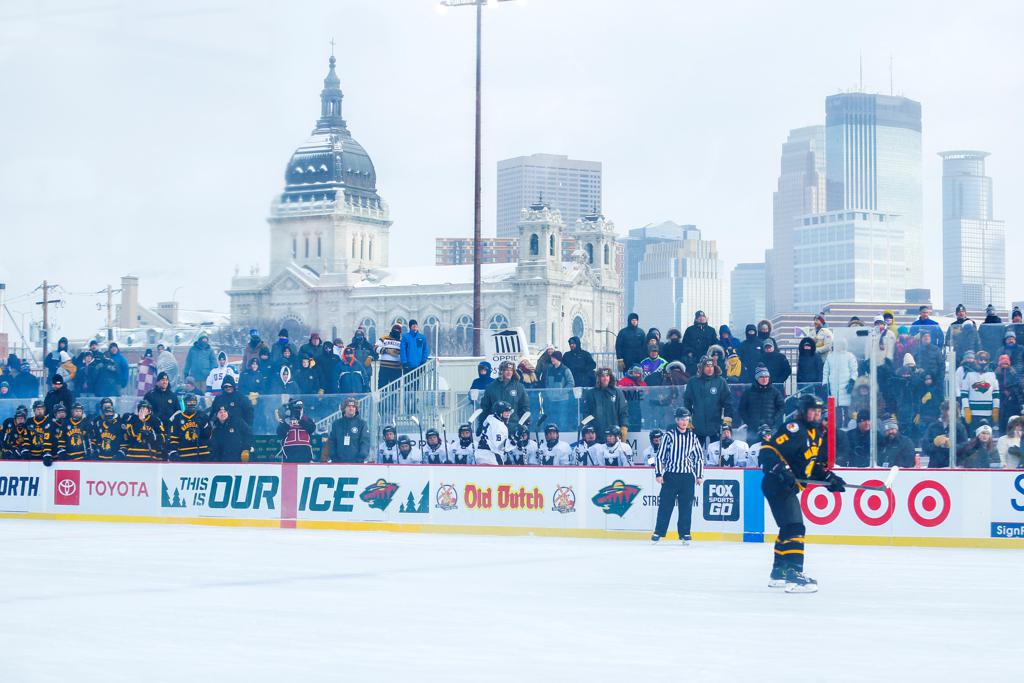 Against the backdrop of the Minneapolis skyline, players from Warroad and Minneapolis played their Hockey Day Minnesota game at Parade stadium. Warroad won the game 5-1. (Photo by Jeff Lawler, SportsEngine)

Minneapolis hockey senior captain Ben Murray gazed at the downtown skyline during Saturday morning warmups, a familiar site made more special by the ice under him and open sky above at Parade Stadium.

Warroad coach Jay Hardwick looked across the ice at a crowd befitting a home game, fans who trekked about 380 miles south for the weekend.

Hockey Day Minnesota, a daylong celebration of the state’s signature sport televised live on Fox Sports North, provided a special stage. Warroad, ranked No 3 in Class 1A, beat host Minneapolis 5-1. But participants saw beyond the scoreboard.

“Not many people get this opportunity, so for us to be able to live it was unreal,” Murray said. “I wish we could go out there and practice every single day this year.”

Minneapolis Mayor Jacob Frey performed the ceremonial puck drop. A few minutes earlier he was in the Minneapolis locker room, exhorting the members of the city’s only public school boys’ hockey program.

“He was fired up and got the boys going,” Murray said.

“Our jerseys are sick!” one young Warriors fan exclaimed.

In the silence before the national anthem, the stanchions holding tall sheets of plexiglass groaned against the biting north wind.

A shovel brigade of 11 youth hockey players cleared the ice of shavings and snow during breaks. Warroad scored twice in the first period, after which fans alternated putting their boots or sneakers on fire pit rims.

On the nearby general rink, youngsters chased the puck with the Spoonbridge and Cherry, located in the Minneapolis Sculpture Garden, as a backdrop.

Both teams lingered on the ice after the game, taking pictures to create permanent memories on a temporary rink. Minneapolis hockey fans who faced the wind for three periods stayed to slap hands as their boys left the ice. And visiting Warroad relished its first Hockey Day Minnesota showcase.

“I was getting asked every year, ‘When is Warroad going to be in it?’ ” Hardwick said. “To finally be part of it is special.”