The Skippers scored two third-period goals, but a late penalty in regulation gave the Trojans momentum. 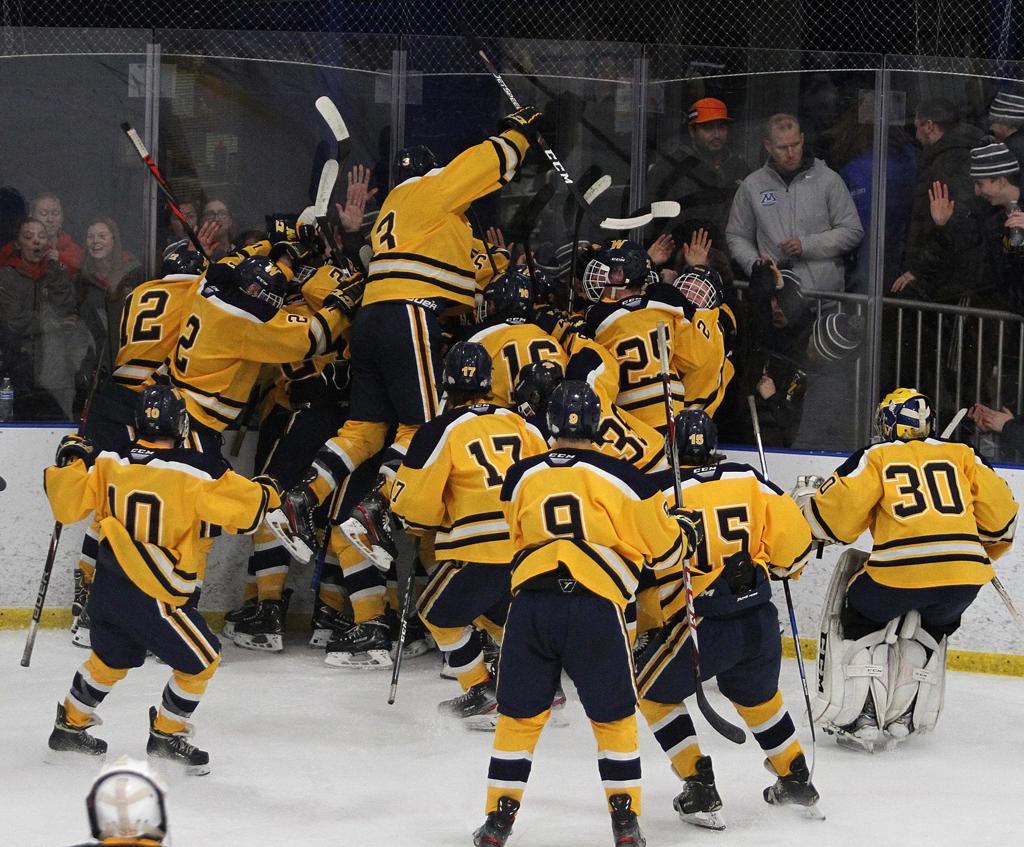 Wayzata celebrates an overtime goal by Kyle Mortenson that lifted the Trojans to a 3-2 road victory over Minnetonka Saturday afternoon at Pagel Arena. Photo by Drew Herron, SportsEngine

Wayzata is on a roll. After defeating Eden Prairie, ranked No. 1 in the 2A coaches’ poll, 2-1 on Thursday, the Trojans faced another tough conference foe in Minnetonka.

Wayzata didn’t falter, and got their second big win in a row against a conference opponent as they defeated Minnetonka 3-2 in overtime at Pagel Ice Arena Saturday afternoon. A game that had its moments of chippiness throughout was perhaps turned in Wayzata’s favor because of one such moment at the end of the third period.

“We struggled a little in the third period,” senior defender Kyle Mortenson said. “But we battled through it. Beating Eden Prairie gave us a confidence boost coming in and we faced another tough team today.”

As the final seconds ticked away in regulation and a Wayzata player pinned the puck up against the boards in a corner of their end of the ice, it seemed all but certain that Minnetonka (10-9-0, 4-2-0), who had scored twice in the third period to tie the hockey game, would continue their third-period streak of momentum and find a way to finish off an impressive comeback against their conference rivals.

Then senior forward Teddy Lagerback, who had scored the tying goal for the Skippers, went hard into the small scrum that had formed against the wall. Whistles blew and it took the referees a minute to separate players out, and Lagerback was sent to the penalty box for the first two minutes of the extra session. 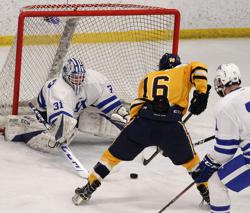 “It wasn’t much more of a physical game than usual from a Lake Conference game,” said Wayzata coach Pat O’Leary “But it got the guys upset and we went hard after it.”

It didn’t look as though the No. 9-2A Skippers would even make it to the extra session. Wayzata (12-6-1, 4-3-0) had dominated play in the first two periods, had scored twice in the second period on even-strength goals by senior forwards Ben Luedtke and Jack Kimlinger, and were outshooting the Skippers 17-8.

A third-period power play, the first of the game for Minnetonka, was the spark the Skippers needed to begin their comeback. Not even a minute into the power play, senior forward Nic Henry beat Wayzata senior goalie Garret Bonello on a shot from the point that looked to have been screened from the goalie’s vision.

“It’s Lake Conference hockey, we knew they were going to come out and make something happen in the third,” O’Leary said. “But giving up a lead is never good.”

Seven minutes later came Lagerback’s game-tying goal, which came on an odd-man rush for the Skippers that ended with the senior alone on the back-door of the goal and in perfect position to tap in a pass from a teammate. Minnetonka tried to make the most of its momentum and finish the comeback, but good efforts on both ends of the ice by Wayzata kept the game waiting for the winning shot until the overtime session.

“Momentum is important and they took it back after their first period,” O’Leary said. “We’ve learned to play through it with how many close games we’ve had this season.”

The power play came and went with no real damage done by the Trojans, as the Minnetonka penalty kill was up to the task. But as the third minute of the eight-minute overtime stretched on, Wayzata used the exhaustion brought on having to kill the power play to force the issue in Minnetonka’s end.

“They had to use their top penalty-killers,” Mortenson said. “We got them tired out and then battled through the rest of the period.”

Several shots on Minnetonka’s net were either blocked or stopped by senior goalie Brandon Shantz, who kept his team in the game by making 21 saves, several on key breakaway chances for the Trojans. But one particular scrum was just a little too busy for the Skipper defense or Shantz to handle, and Mortenson was in the right place at the right time to slap the puck past Shantz and into the back of the net.

“The puck just squirted out to me and the goalie was out of position and I backhanded it in,” Mortenson said. 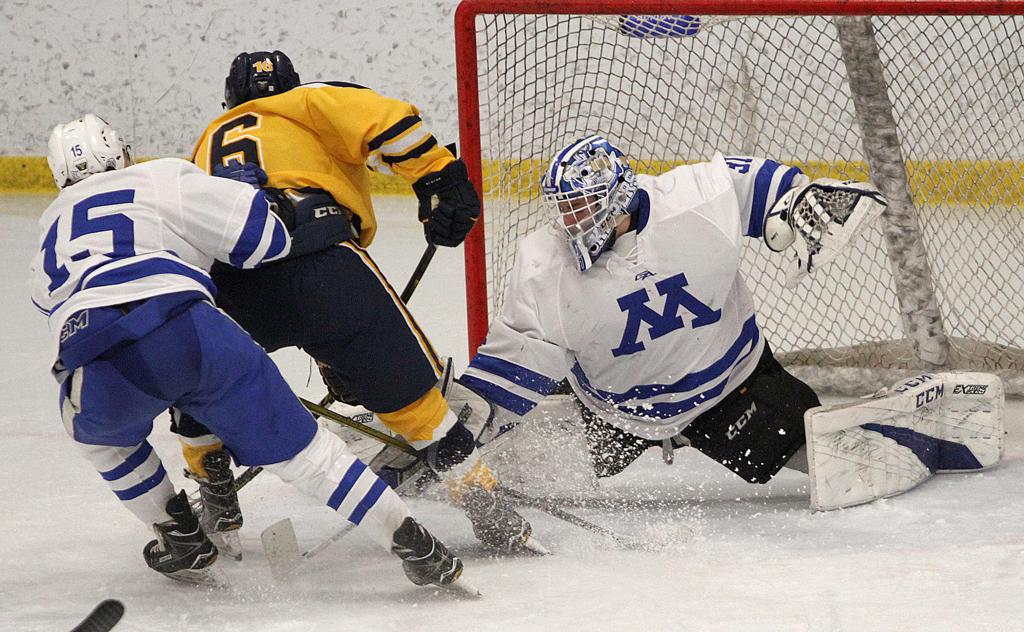 The Lake Conference has long been a conference where any team can win on any given night. This afternoon, it was Wayzata’s turn to take down conference rival Minnetonka, as Kyle Mortenson’s goal with 4:11 remaining in overtime in front of a noisy crowd at Pagel Ice Arena gave the Trojans a big 3-2 win.

Wayzata (12-6-1, 4-3-0) dominated play in the first two periods, scoring twice in the second on goals by senior forwards Ben Luedtke and Jack Kimlinger and outshot the Skippers (10-9-0, 4-2-0) 17-8. Senior goalie Brandon Shantz (21 saves) kept Minnetonka, ranked No. 9 in the class 2A coaches' poll, within reach of a comeback by making several tough saves on Wayzata breakaways.

Lagerback was called for roughing at the conclusion of regulation after getting involved in a scrum along the boards, and the penalty gave Wayzata momentum to start the OT period before Mortenson’s even-strength goal.