The Raiders' Matthew Gleason, the state's leading scorer, recorded his 32nd and 33rd goals of the season in the third period. 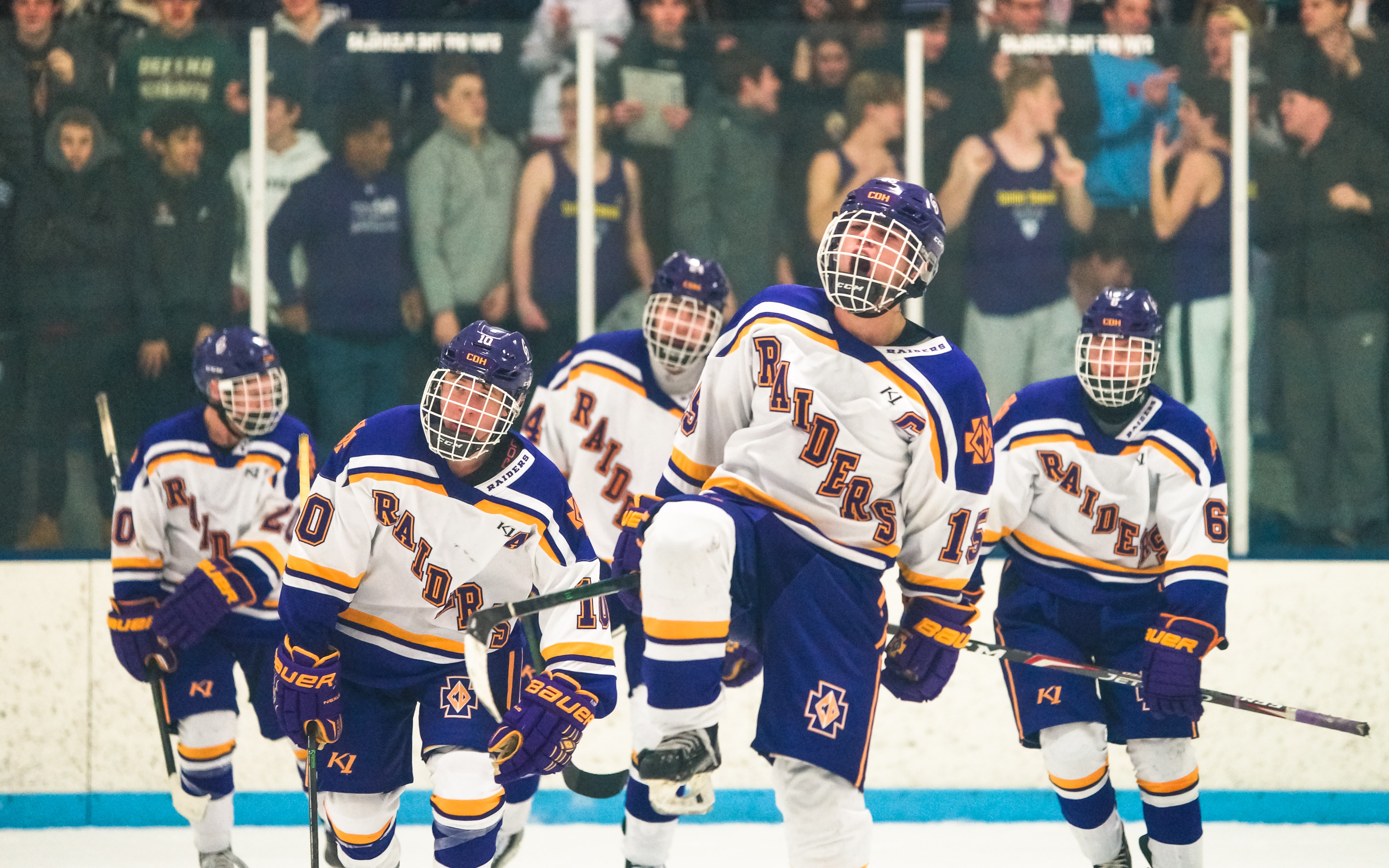 Down 1-0 to a conference rival in front of a packed crowd on home ice, the message in the Cretin-Derham Hall locker room at the second intermission was simple.

“We were one shot away from the roof blowing up,” said Raiders coach Matt Funk.

That one shot came at the end of a power play a little over 3 minutes into the third period when senior Matthew Gleason scored off the rush to make it 1-1 against White Bear Lake, ranked No. 6 in the Class 2A coaches’ poll.

“We knew that the energy in here was ready,” Funk said. “(Gleason) puts the guys on his back and the whole group feeds off it.”

It ended up being the goal that opened the floodgates in the final period, as the No. 7-2A Raiders scored three more times to notch a 4-1 victory Tuesday over their Suburban East Conference foe at Highland Ice Arena. 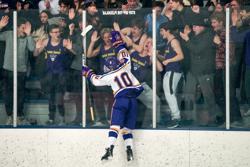 Energy was high as the Raiders hit the ice for the third period, with Gleason shouting “Let’s go!” as he made his way onto the ice. With an early power play, he got the puck near the end of a shift with the Bears going for a line change.

“I just got the puck full speed and thought might as well take advantage of it and just get a shot on net,” Gleason said. “I got in and didn’t rip one right in the logo for once.”

Indeed, despite some earlier chances for Gleason where the puck found the goaltender, this shot hit the back of the net with 9 seconds left on the power play to tie it at 1. The Raiders fans were feeling it, too, breaking into a “Mr. Hockey!” chant.

The game-winner came with about 10 minutes left in the game on a play between brothers. Sophomore Drew Fisher slid the puck over to his freshman brother Jake Fisher for his ninth goal of the season.

“He just had a rush going up the boards, so I joined him and he had a nice pass, and I caught the goalie sliding over,” Jake Fisher said. “Big momentum changer. It felt really nice acting like one of the big guys. I’m still a freshman, but it was just nice to contribute.”

Part of the team’s second line, it was cool to see the brother-to-brother goal, Funk said, who added “they look like twins out there.”

Gleason enjoyed it as well.

“That was awesome,” Gleason said. “Just give it to the freshy and put it home. I love it.”

Senior Jack Nei added the insurance a few minutes later with his 15th goal of the year only 27 seconds into another power play. The Raiders finished 2-for-5 with the man advantage.

Gleason, the state’s leading goal scorer, bookended the scoring for the Raiders with an empty-net goal with 1 minute, 17 seconds left in the game. It was the 11th multi-goal game of the season for the Colorado College commit, who has 18 points in his past five games. He now sits at 33 goals and 63 points this season.

Not only is Gleason showing what he can do on the ice, but he’s also a leader on what Funk described as a young team. Gleason is like a fourth coach, Funk said.

“He sees things out there that the normal high-school player just doesn’t see,” Funk said.

It’s everything from matchups and different situations to where the goaltender is playing, according to Funk. Gleason lets them know those things.

“To have a leader like that with these young guys, it’s something that these guys will always remember and carry forward to the next four years,” Funk said.

Despite failing to cash in on four power-play chances in the latter half of the first period, the Bears didn’t waste much time breaking the scoreless tie in the second. White Bear Lake senior Billy Rose drove toward the net and scored off the rush on a backhand shot just 1 minute, 10 seconds into the second period for a 1-0 Bears lead.

The Raiders (16-3-1, 13-0-0) are riding a five-game winning streak, in which they’ve outscored opponents 28-5, and a nine-game unbeaten streak. Sophomore Marko Belak made 28 saves to improve to 16-3-1, coming up big to keep the game scoreless during the four first-period penalty kills.

White Bear Lake (13-4-1, 11-3-0) finished 0-for-5 on the power play. It was only the fourth time this season that senior goaltender Tyler Steffens, who came in with a 1.45 goals against average and .936 save percentage, allowed three or more goals in a game.

The teams will face off again on Feb. 13 in the regular-season finale at Vadnais Sports Center.

Cretin-Derham Hall didn’t let a bunch of penalties in the first period or a one-goal deficit headed into the third stop it.

The Raiders, ranked No. 7 in the Class 2A coaches’ poll, responded with a bevy of third-period goals to grab a 4-1 victory over No. 6-2A White Bear Lake in a battle of Suburban East Conference squads Tuesday in front of a packed house at Highland Ice Arena in St. Paul.

Senior Matthew Gleason, the state’s top goal scorer, recorded his 32nd goal of the season just 1 minute, 29 seconds into the third period to tie the game at 1 apiece. Freshman Jake Fisher gave the Raiders (16-3-1, 13-0-0) the lead with just under 10 minutes to play before senior Jack Nei added insurance on the power play with about 6 minutes left in regulation. An empty-netter from Gleason sealed the win.

The Raiders are riding a five-game winning streak and nine-game unbeaten streak. The Bears, meanwhile, have lost three of their last six contests. 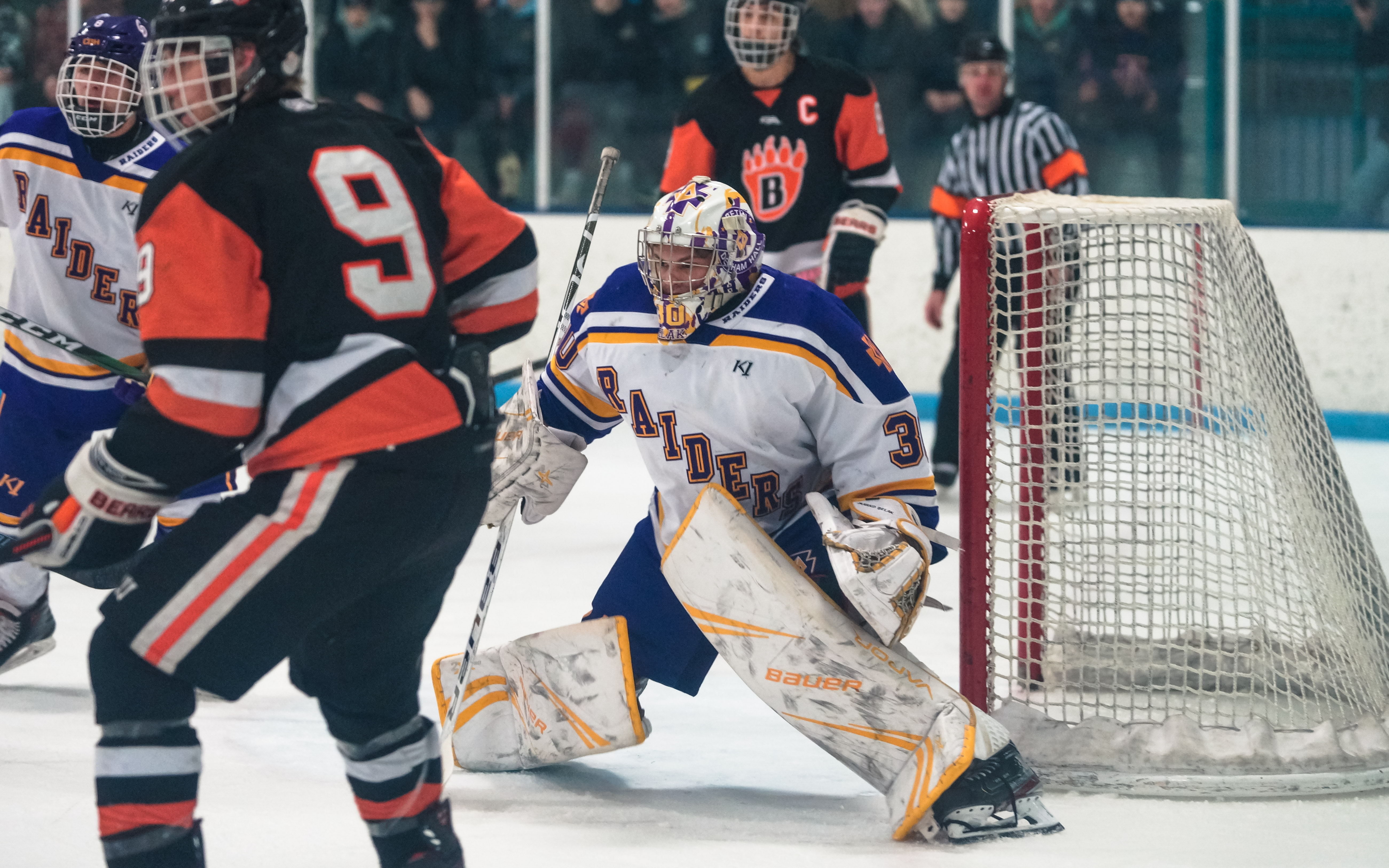