Sophomore Jackson Blake made his anticipated season debut and tallied a goal in the Eagles’ win, while teammates Ben Steeves and Riku Brown combined to score five additional goals. 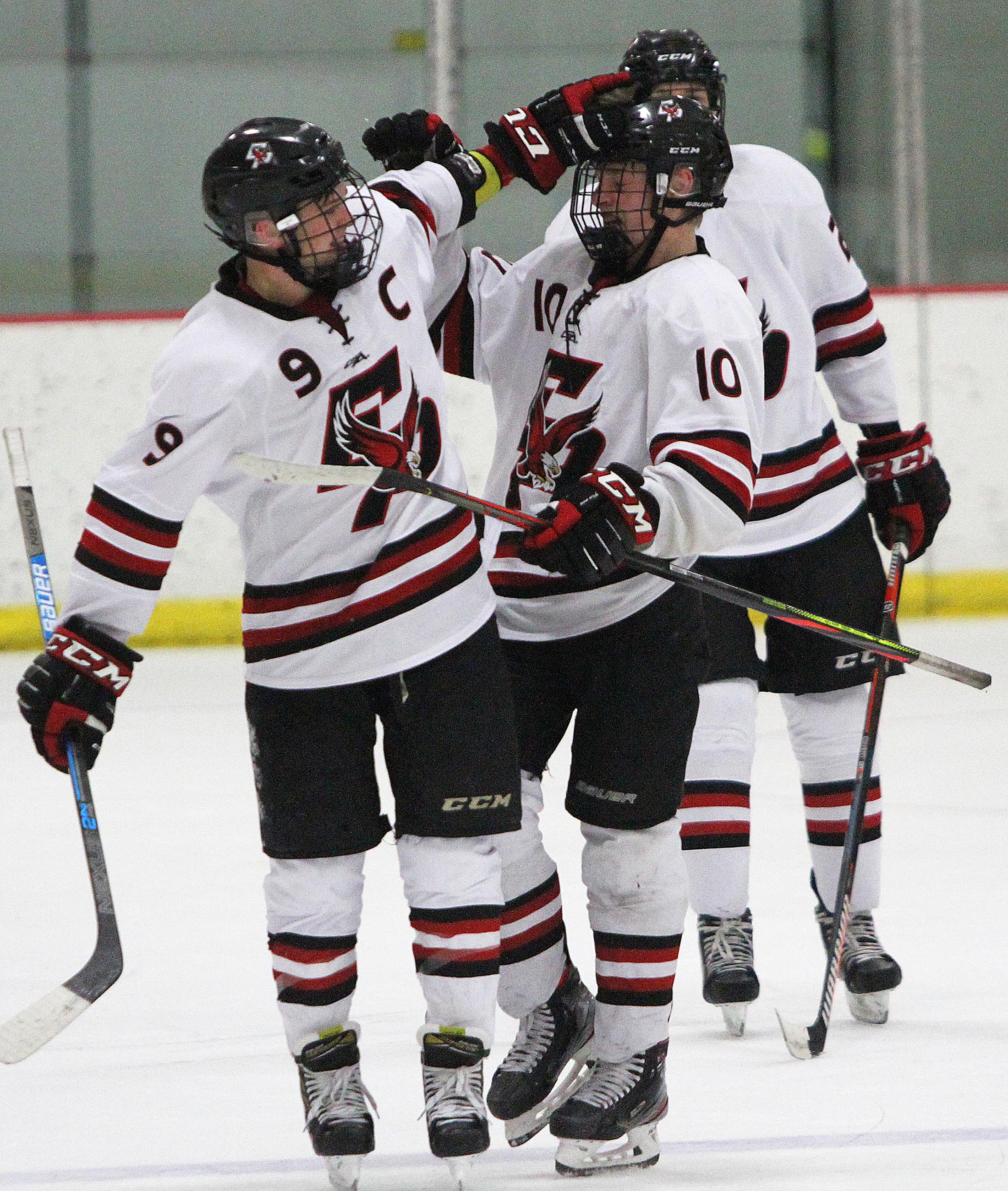 Eden Prairie’s matchup with Buffalo on Thursday was, at least on paper, just another tilt for the Eagles to run through their Lake Conference schedule this season. In reality, however, it wound up being a pretty significant night for the program.

In addition to it being a chance for Eden Prairie to snap a two-game skid, It was also an opportunity for the Eagles to show off their newest shiny offensive toy in Jackson Blake, a sophomore forward who made his highly anticipated varsity debut against the Bison.

For Blake and his teammates, the game went as well as it could have gone. Blake recorded his first varsity goal, and Eden Prairie, ranked No. 5 in the Class 2A coaches’ poll, rolled to a 9-1 victory over Lake newcomer Buffalo (5-15-0, 1-7-0) to stay atop the conference standings. 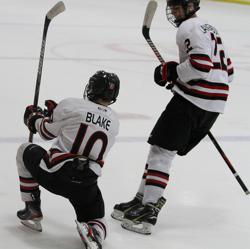 “There were plenty of nerves as I was getting out there and getting ready,” Blake said, reflecting on the night. “But then I got through the first couple of shifts and it got better.”

What was the reason for Blake’s delayed debut? The Minnesota State High School League had deemed Blake ineligible until Jan. 28 after he transferred to Eden Prairie (14-4-1, 5-1-0) last January from Shattuck-St. Mary’s. Up to this week, Blake had been skating with the Eagles’ junior varsity team.

It didn’t take long for Blake to get comfortable in his new Eden Prairie sweater.

After teammate Riku Brown, a junior forward, scored to make it 1-0, Blake had a golden opportunity with a shot from the slot. He didn’t miss and buried it for his first goal, with the score resulting in a celebration from the entire team.

“We had to have a big celebration,” said Eagles senior forward John Mittelstadt. “It was so fun and it’s great to get to play together after we played together growing up.”

Despite having no varsity experience prior to Thursday, Blake found himself on Eden Prairie’s top line alongside two of the Eagles’ top scorers — senior forwards Ben Steeves and John Mittelstadt, who are tied with a team-high 38 points apiece.

This trio was on the ice for Blake’s goal and kept rolling from there.

Steeves stole the show in the middle period, tallying a natural hat trick with the final two goals in the second period and the first goal of the third period. The Minnesota Duluth commit now has a team-high 21 goals while Mittelstadt picked up an assist in the win.

“It’s unbelievable playing alongside these guys,” Blake said. “(Mittelstadt) is one of the hardest working players I’ve been played with and (Steeves) is a great player who can score from anywhere.”

Blake’s addition to the lineup comes at an opportune time for the Eagles who seek a Lake championship despite their recent blemishes.

“We had some tough losses, but with Blake back we definitely worked harder and played together,” Mittelstadt said. “It feels like our team is complete now. This is what we were shooting for at the beginning of the year.”

Following Blake’s goal, Mittelstadt and the rest of the Eagles made sure Blake had the puck that he scored his first varsity goal with. The sophomore said he’ll tape it up in his bedroom to mark the occasion.

With his first game behind him, Blake and his teammates can now focus on Saturday’s matchup with Edina. Though Blake hasn’t faced the Hornets’ varsity yet he’s fully aware of the importance of the game for both sides.

“I’m jacked to play in this rivalry,” said Blake, who grew up playing in the Eden Prairie Hockey Association. “It’s a rivalry for us from squirts on up. I just want to get out there and enjoy it.” 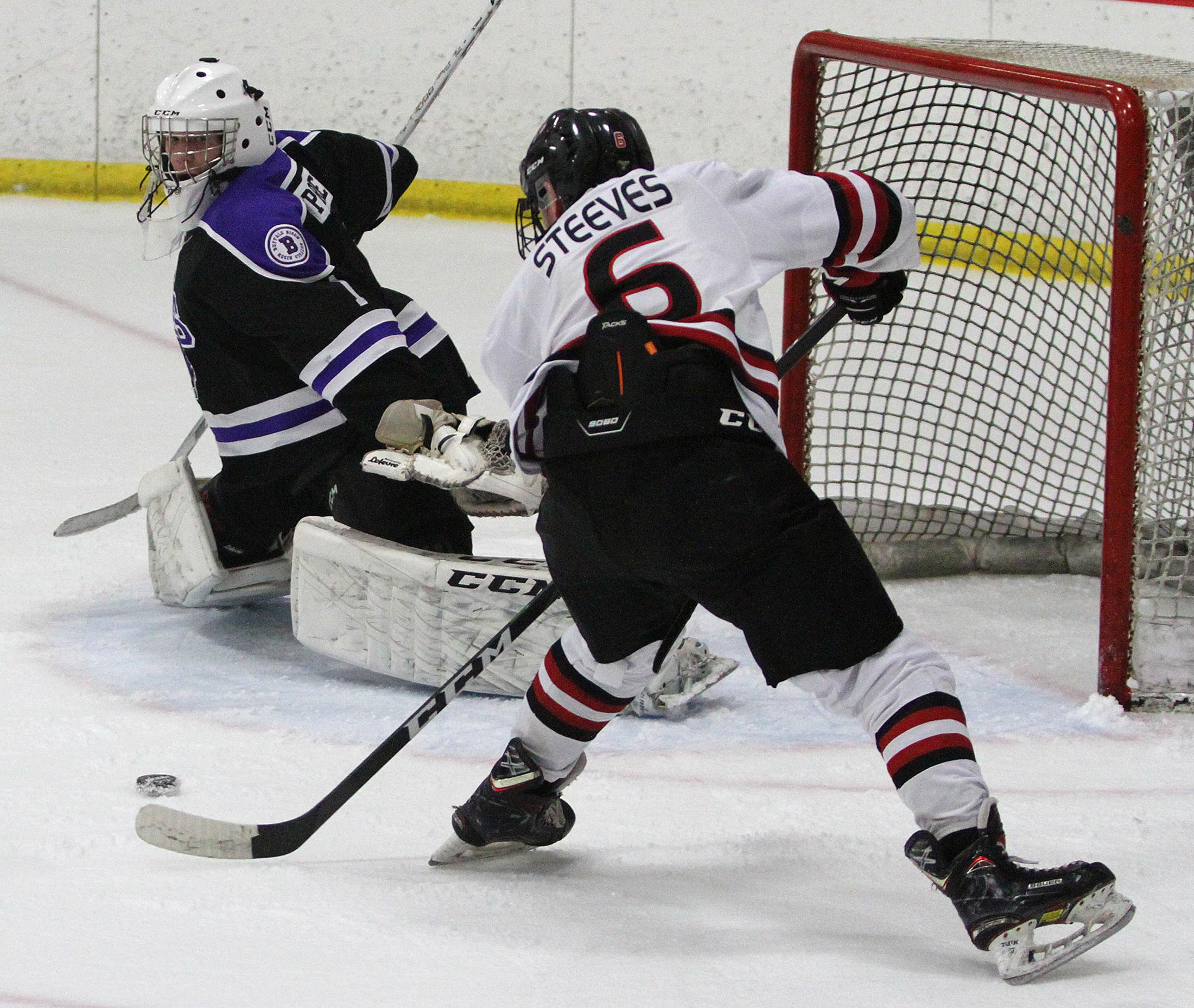 Eden Prairie hit the ice at the Eden Prairie Community Center for a matchup that was important for several reasons Thursday night. Not only was it a chance for the Eagles to snap a two-game skid, it was the varsity debut of standout sophomore Jackson Blake.

The game turned out to be a breeze, as Eden Prairie cruised to a 9-1 victory over Lake Conference newcomer Buffalo, with Blake scoring his first goal for the Eagles (14-4-1, 5-1-0).

Junior forward Riku Brown kicked off the scoring for Eden Prairie, ranked No. 5 in the Class 2A coaches’ poll, and finished with a pair of goals in the win.

Blake notched his goal on a hard shot in front of the net in the first period, while his linemate, senior forward Ben Steeves, took the reigns and powered the Eagles’ offense with a true hat trick. He had the final two goals in the first period and the first score of the middle second period.

Buffalo (5-15-0, 1-7-0) didn’t scratch the scoresheet until late in the third period, when senior forward Tyler Braccini tallied the Bison’s lone goal, his team-best 17th goal of the season. 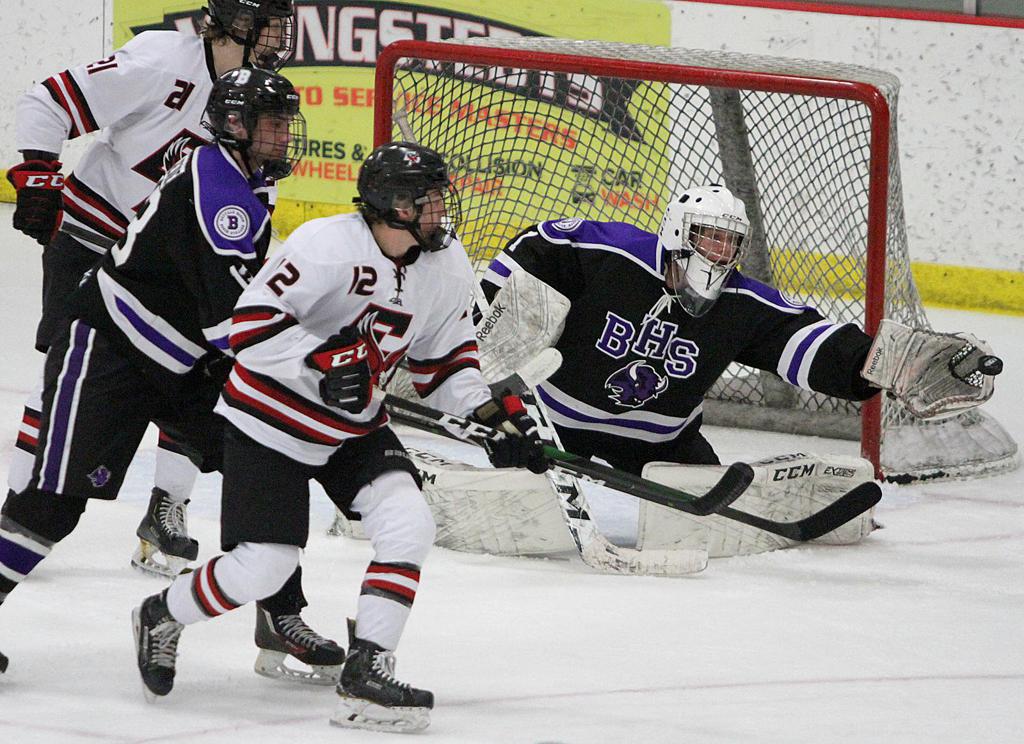