Remington Keopple backstopped a Pioneers' defense that gave up just one goal in their defeat of the Crimson. 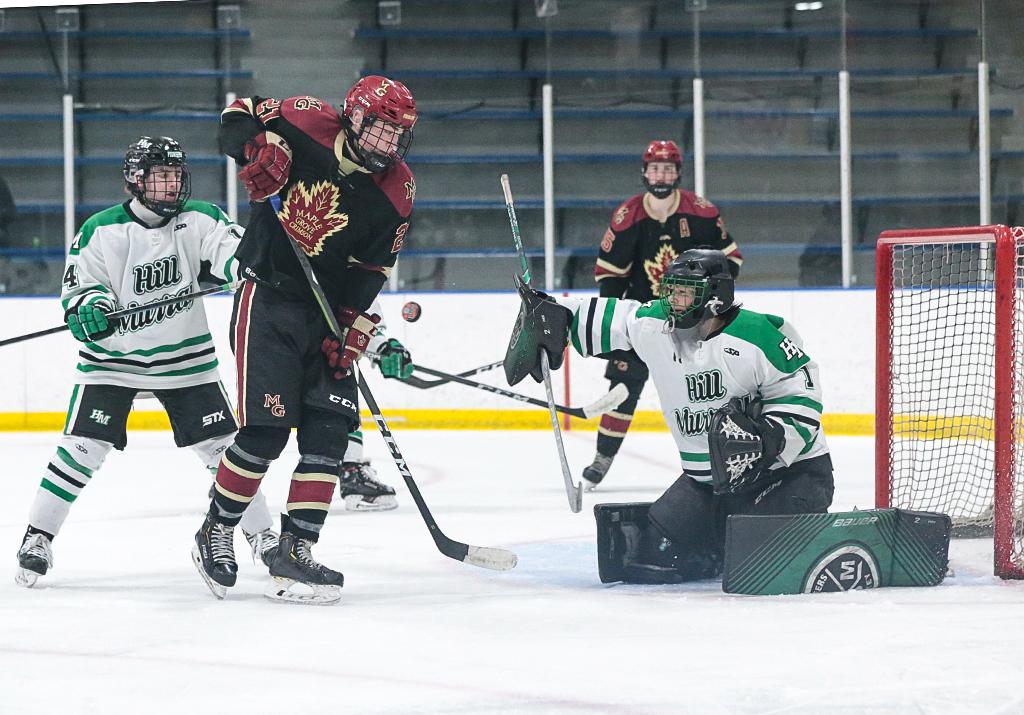 Hill-Murray's Remington Keopple deflects a shot off his blocker in the third period. Keopple's 32 saves led the Pioneers to a 4-1 win at Aldrich Arena on Tuesday night. Photo by Cheryl A. Myers, SportsEngine

When Hill-Murray senior forward Charlie Strobel was asked if it was hard to sell a defensive mindset to he and the other forwards on his team's roster, Pioneers coach Bill Lechner had a quick response.

"Don't tempt him," Lechner said with a sly smile.

Lechner need not worry, because Strobel and the rest of the Pioneers have adopted that focus of playing good defense, which was on display in a 4-1 victory over Maple Grove at Aldrich Arena on Tuesday night.

"Coach has instilled that mindset of good play in the D-zone first," Strobel said. "Defense leads to offense and defense wins games. As a leader, and a captain, if I can preach that mindset to everyone else I think we have a good chance to do great things this year."

Goaltender Remington Keopple stopped all but one of the 33 Maple Grove shots he faced as the Pioneers (14-6-2, 6-1-1) stonewalled a team that had scored 26 goals in its three previous contests combined. 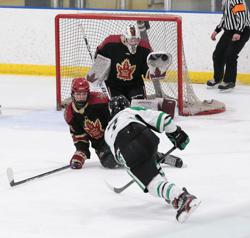 "That's a good club," Lechner said of the Crimson, who are ranked No. 10 in the Class 2A coaches’ poll. "But 'Remi' shut them down early, and we were able to get some offense going."

Maple Grove (15-6-0, 9-2-0) took advantage of some Pioneers' struggles early, when they couldn’t get the puck out of their defensive zone in the first period. Maple Grove got 15 shots on net in the period, but Keopple stopped them all and Hill-Murray led 1-0 when Strobel scored just 3 minutes, 38 seconds into the contest.

"Sometimes we start slow but that happens," Keopple said. "You just have to weather the storm. We played better as the game went on."

As the game progressed, the Pioneers showcased their defense-first mindset that began to restrict the shots and loose pucks Keopple had to face, and the senior goalie limited the rebounds that might create dangerous scoring chances.

"Our defense blocks a lot of shots and that's a big help to me," Keopple said. "I think we are playing well in our defensive zone, trying to force them to take tough shots from the outside."

Senior Owen Quast scored at the 9:51 mark of the second period to give Hill-Murray a 2-0 advantage entering the third period, and sophomore Nate Hardy scored on a breakaway at 3:39 of the final period.

Strobel said he and his teammates can still generate some offense despite their defense-first approach.

"It depends on the eyes of the defense," he explained. "If his eyes are on 'Remi" in goal, I get in the shot lane. But if his back is towards me, I can jump him and try to gain some offense.

"But you have to read the situation. And you can't forget about the defense."

That response is sweet music to Lechner's ears.

"The bottom line is that if you're a good defensive team, from the goalie out, the offensive chances will happen," he said. "We're not going to have 40 or 50 shots on net, because that means you'll have 40 or 50 shots right back at you. But we have good defense, and a good goalie and we'll build out from there."

Maple Grove avoided being shut out when Tyler Oakland scored just 24 seconds after Hardy's goal. Hill-Murray buckled down, however, and Strobel netted a short-handed goal at 13:41 to give the Pioneers their fifth win in six games.

Keopple said the Pioneers need to continue with their defense-first mindset. So far this season, the approach has led to the Pioneers recording five shutouts and 17 games in which the opposition has scored two goals or less. It’s a system that has vaulted Hill-Murray to 11 appearances in the state tournament since 2006.

"If we play well in the defensive zone, that will create enough offense for us to win," he said. "We have enough guys who can put the puck in the net." 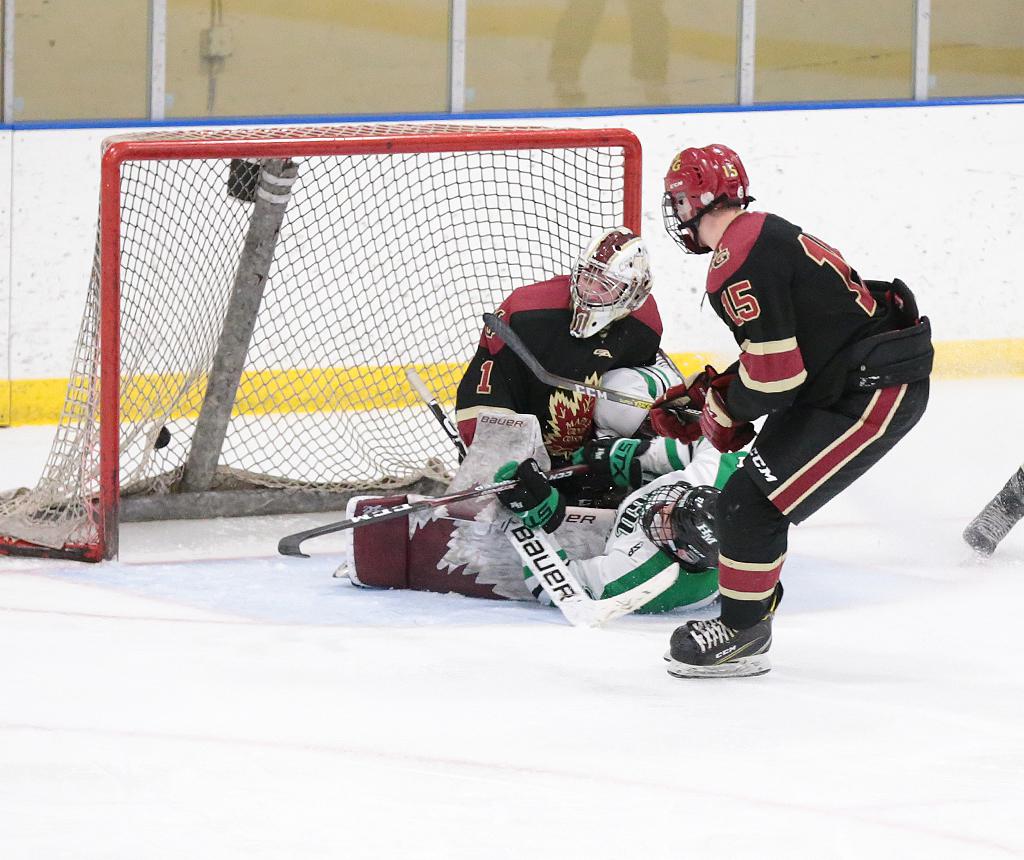 The Pioneers' Charlie Strobel slides through the crease as his second goal hits the back of the net. Strobel's two goals helped Hill-Murray to a 4-1 win over Maple Grove. Photo by Cheryl A. Myers, SportsEngine

Senior goaltender Remington Keopple made 32 saves to backstop Hill-Murray to a 4-1 victory over Maple Grove at Aldrich Arena Tuesday.

Strobel scored just 3:38 into the contest for the only goal of the first period, and Quast gave the Pioneers a 2-0 lead through two periods with his rebound goal off a shot by sophomore Axel Begley at 9:51 of the second.

Hardy's goal on a breakaway at 3:39 of the third period gave the Pioneers a 3-0 advantage, but Oakland scored 24 seconds later to spoil the shutout for Keopple.

Strobel then netted a short-handed goal at 13:41 to put the game out of reach. 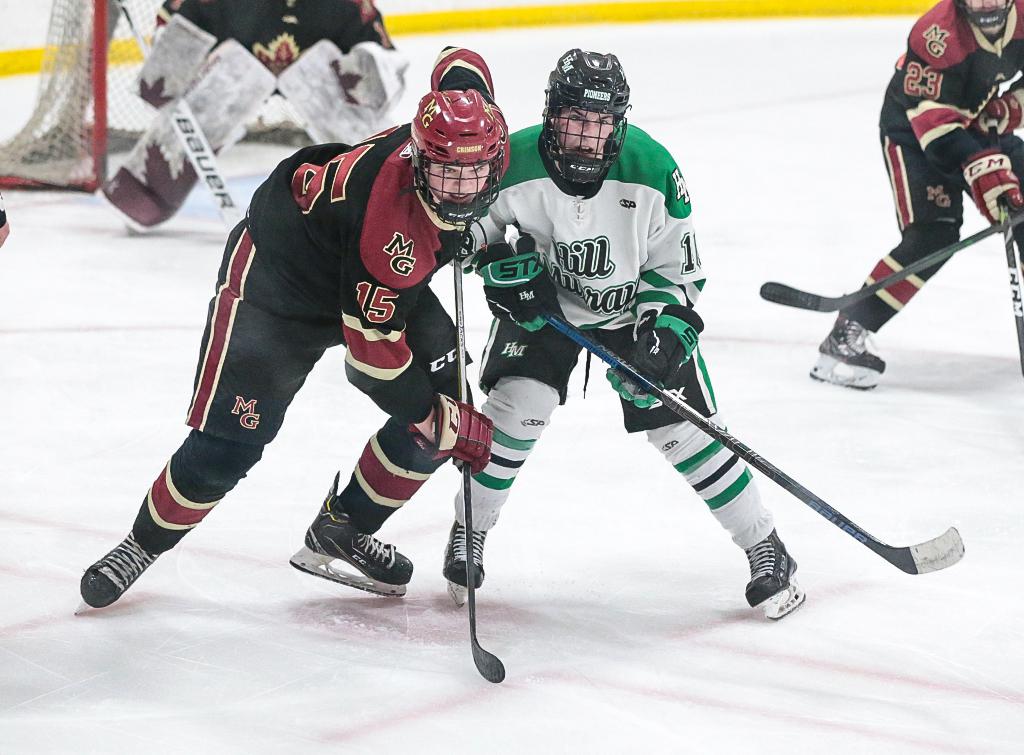