Jackson Borst finished with two goals as the Hornets buried three goals on 10 shots in the middle period. 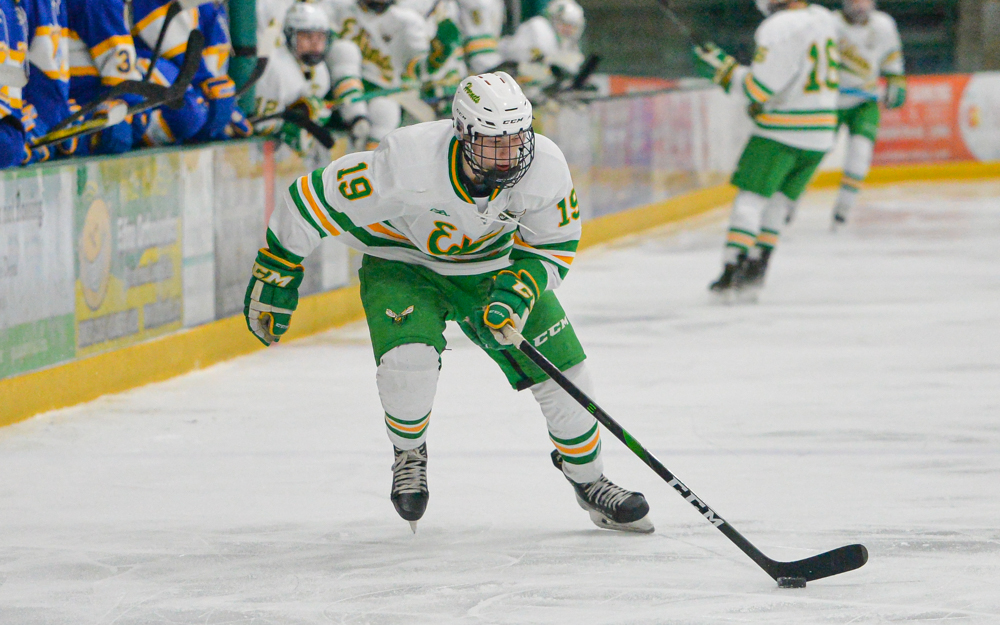 Edina began the season with a fresh state championship banner and a 1-3 start. Junior forward Jackson Borst knew he wasn’t burying his chances, scoring just one goal in the first seven games.

“I think because I wasn’t pouncing on pucks,” Borst said. “I wasn’t battling down low, and I wasn’t shooting the puck, and that’s how you score goals.”

The goal-scoring floodgates have opened just a bit more for Borst, as he scored a pair of goals in a three-goal second period during a 4-1 victory over Lake Conference foe St. Michael-Albertville on Thursday at Braemar Arena in Edina. Borst leads the Hornets (11-9-2, 3-3-1) with 11 goals and 18 points, scoring four goals in the two games against St. Michael-Albertville.

After senior Emmett Wurst gave Edina a 1-0 lead in the first period, the game was knotted at one apiece at the first intermission. 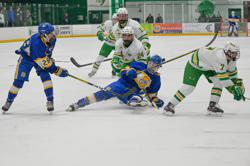 Edina’s three goals on 10 shots in the second period started with Borst pouncing on a rebound. The goaltender couldn’t quite glove the initial shot from senior Nolan Williams cleanly, and the puck trickled free in the crease. Borst was there for the 2-1 lead.

Then only 21 seconds into a power play, Borst’s linemate, freshman Jimmy Clark, got a mini breakaway and slid the puck past the goalie for the two-goal lead just one minute, three seconds later. The Hornets grabbed ahold of the momentum from there, with Borst adding his second of the game with six minutes, 15 seconds to play in the second period for the 4-1 lead.

On that play, Borst drove into the zone and passed the puck to junior defenseman Nick Williams who took the shot. The puck bounced around and Borst once again found the puck, quickly sneaking it in between the goal post and the netminder’s right skate.

“He’s always in the right spot, so it’s pretty easy,” said Williams, who assisted on all three second-period goals, giving him a team-leading 16 helpers this season. “He does the dirty work to get in those little areas and just puts them home.”

Edina coach Curt Giles said the majority of Borst’s goals come from around the net.

“He works hard to get to the front of the net, and he’s hard to handle because he’s strong and he goes to the net hard,” Giles said.

The Hornets defense also stymied one of the best top lines around in St. Michael-Albertville’s Adam Flammang, Luc Laylin and Casy Laylin, a line coming in with 144 total points. The solid defense included the Hornets killing off about a minute of 5-on-3 time while up 4-1 in the second period, with two of their better defenders in the penalty box in Williams and senior Jake Boltmann.

Wyatt Wurst and Gunnar Johnson were out defending on that particular penalty kill, and Giles said he “knew they could handle the job.”

“Our boys battled it out, got the kill, which was huge,” said Boltmann, who took a cross-checking penalty when his team was already down a skater. “I made sure I thanked them when I got back to the bench, too, because I hate to do that to my team.”

Thursday was a much better result for Edina compared to the first meeting between the two teams, a 5-5 tie on Jan. 7 at St. Michael-Albertville Ice Arena.

“The revenge always feels nice,” Williams said. “Shutting down their top line, their top guys, which was the most important part of this game, I think. That was the big key.”

Things have been rolling around fairly well for the Hornets since that tie with the Knights (11-9-3, 4-4-1), which came on the heels of a couple shutout losses against Hill-Murray in early January. That stretch was a wake-up call, Borst said. Edina’s followed it up with a 5-2 record.

“Ever since then, we’ve been playing our best hockey,” Borst said.

With three regular-games on the schedule before a tough section battle with teams like Blake and Wayzata, Giles said his team — the defending Class 2A state champion — is playing decent the past seven or eight games and close to their best hockey, “but we have a little ways to go yet.”

The key is scoring goals when you get the chance to grab momentum, according to Giles.

“When you get opportunities, you really have to capitalize because there are a lot of good teams out there,” Giles said. 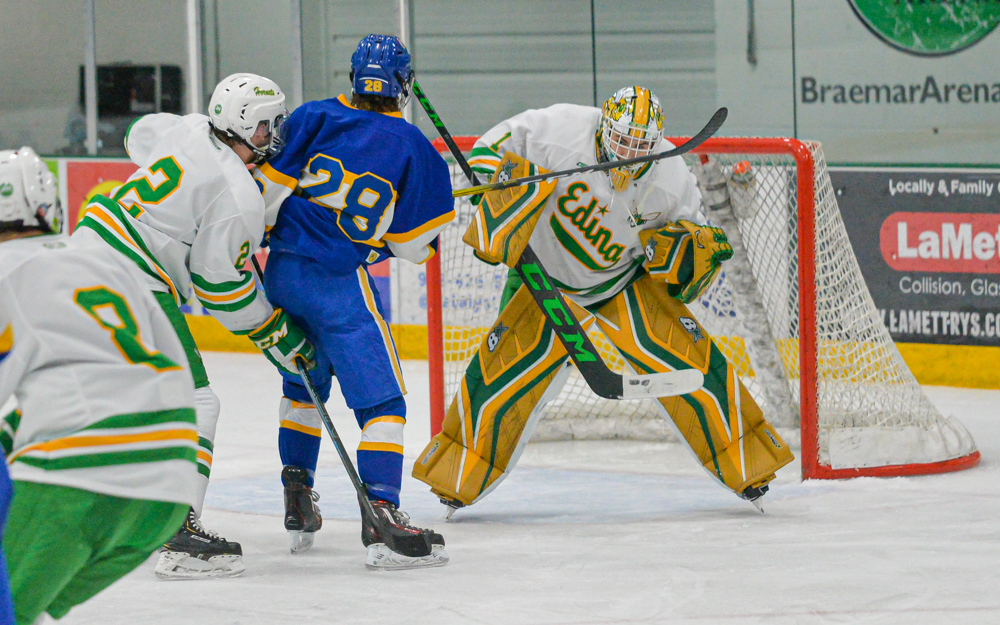 Edina opened up the floodgates for a three-goal second period to help get a win over a Lake Conference opponent, defeating St. Michael-Albertville 4-1 on Thursday at Braemar Ice Arena in Edina.

Junior Jackson Borst scored a pair of goals in the second period to add to his team-leading total of 11 this season. He also had a two-goal game in the first meeting with the Knights during a 5-5 tie on Jan. 7 at St. Michael-Albertville Ice Arena.

The game was knotted at one apiece through the first period before Borst and freshman Jimmy Clark took a 3-1 lead on goals one minute, three seconds apart. Clark’s goal, his ninth of the season, came on the power play. Borst added another a few minutes later for the three-goal lead, causing the Knights to take a timeout.

Edina junior defenseman Nick Williams assisted on all three goals in the middle frame, giving the Gophers commit a team-leading 16 assists this season.

After a 1-3 start this season, the Hornets (11-9-2, 3-3-1) have improved lately, going 5-2 in their past seven games with three regular-season games left on the schedule. 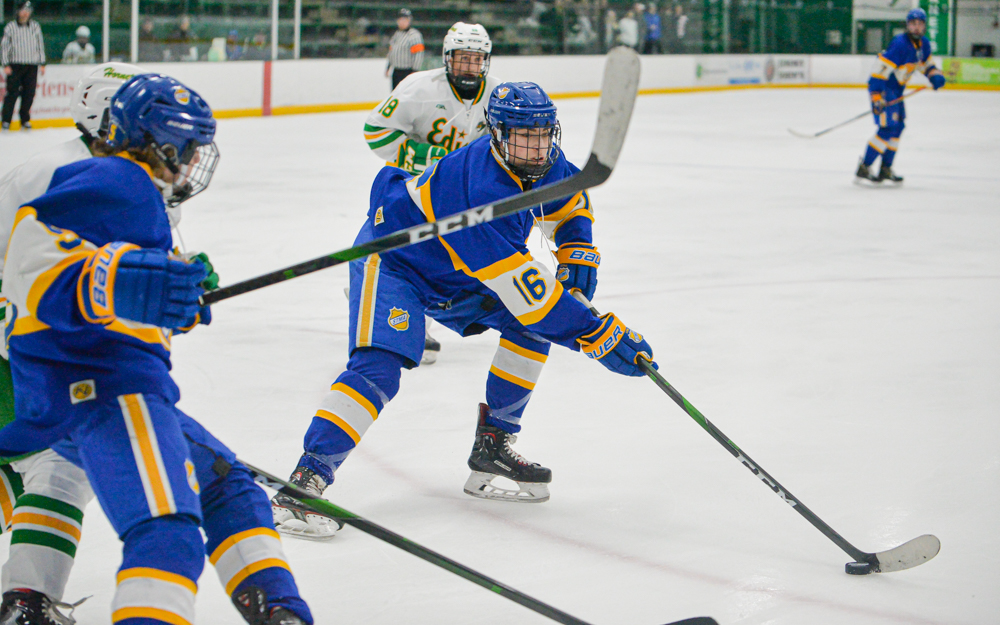