Eden Prairie's offensive onslaught proves to be too much for Benilde-St. Margaret's 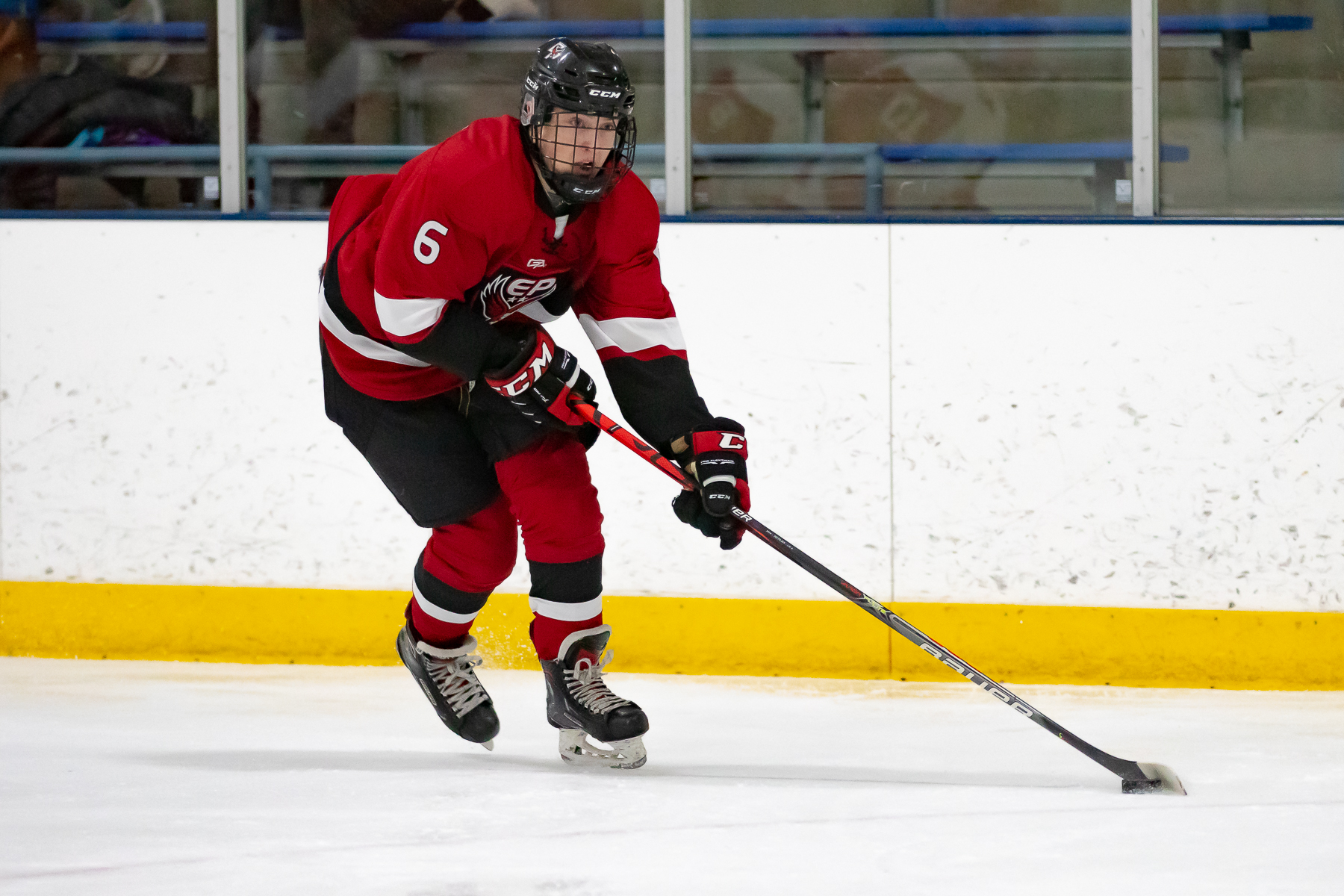 After Eden Prairie lost to rival Minnetonka 3-1 on Saturday, the Eagles knew they were going to have to work hard and come up with a response when they traveled to St. Louis Park to take on Benilde St. Margaret’s.

The Eagles responded by scoring early, often, and in every phase of the game to triumph 6-2 over the Red Knights, who are ranked No. 7 in the Class 2A coaches’ poll.

“We had a bad game on Saturday, and the kids rebounded really well, and came out and really competed tonight all the way through the lineup,” Eden Prairie coach Lee Smith said.

So many Eden Prairie players were excellent Tuesday, with the team’s leading scorer, Ben Steeves, headlining the show. Steeves recorded his fourth hat trick of the season, giving him a team-leading 27 goals this season. He also added an assist to cap a dominant performance. 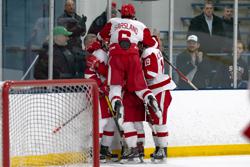 While notching another hat trick against a quality opponent this late in the season is nice, it’s still not Steeves’ favorite three-goal outing.

“Coming near the end of the year, this is pretty important,” he said. “But the first game of the season (against Cretin-Derham Hall) I had one, and that was my first high school game ever so I thought that was a good introduction to high school.”

Steeves said after the No. 3-2A Eagles stumbled on Saturday they were looking for redemption.

“Our main goals were forechecking, always taking the body and putting shots on net,” he said. “When we do that we pick up rebounds, and we pick up goals, and for a team as skilled as our team if we’re not scoring more than three goals in a game we’re not doing our job.”

Steeves got his first goal off a rebound, coming when he was at the front of the net on a power play in the first period. His subsequent goals were scored after John Middelstadt and Jackson Blake set him up with clear chances in the second period.

“He’s such a good shooter,” Smith said of Steeves. “Jackson and John worked really hard on two of those to set him up, and there’s no way he was going to miss those.”

The assist from Blake was the only point he had in the game, but he consistently skated by defenders with ease and was clearly one of the best players on the ice. While the Eagles were 3-3 in their previous six games, Smith pointed out that after Tuesday’s victory the Eagles (17-5-1, 6-2-0) are now 4-1 with Blake on the ice.

Blake is a recent addition to Eden Prairie’s varsity lineup, and since he’s been able to play the Eagles’ potent attack has averaged 4.6 goals per game.

Benilde St. Margaret’s (14-7-2, 4-1-0) coach Ken Pauly said he wasn’t happy to see that the Eagles were coming into Tuesday’s matchup off a loss.

“If we had played them on Saturday, we’d be in a little better shape. I was telling Lee at the end of the game that when Minnetonka beat them I thought, ‘uh oh,’” he said.

He added that his team “didn’t bring it tonight,” but that the game will serve as a wake-up call and that he’d rather suffer defeat now instead of once the section playoffs start.

As for the Eagles, beating the Red Knights should help boost their confidence.

“We made an agreement with our team that we’re not losing from this point on,” Steeves said. 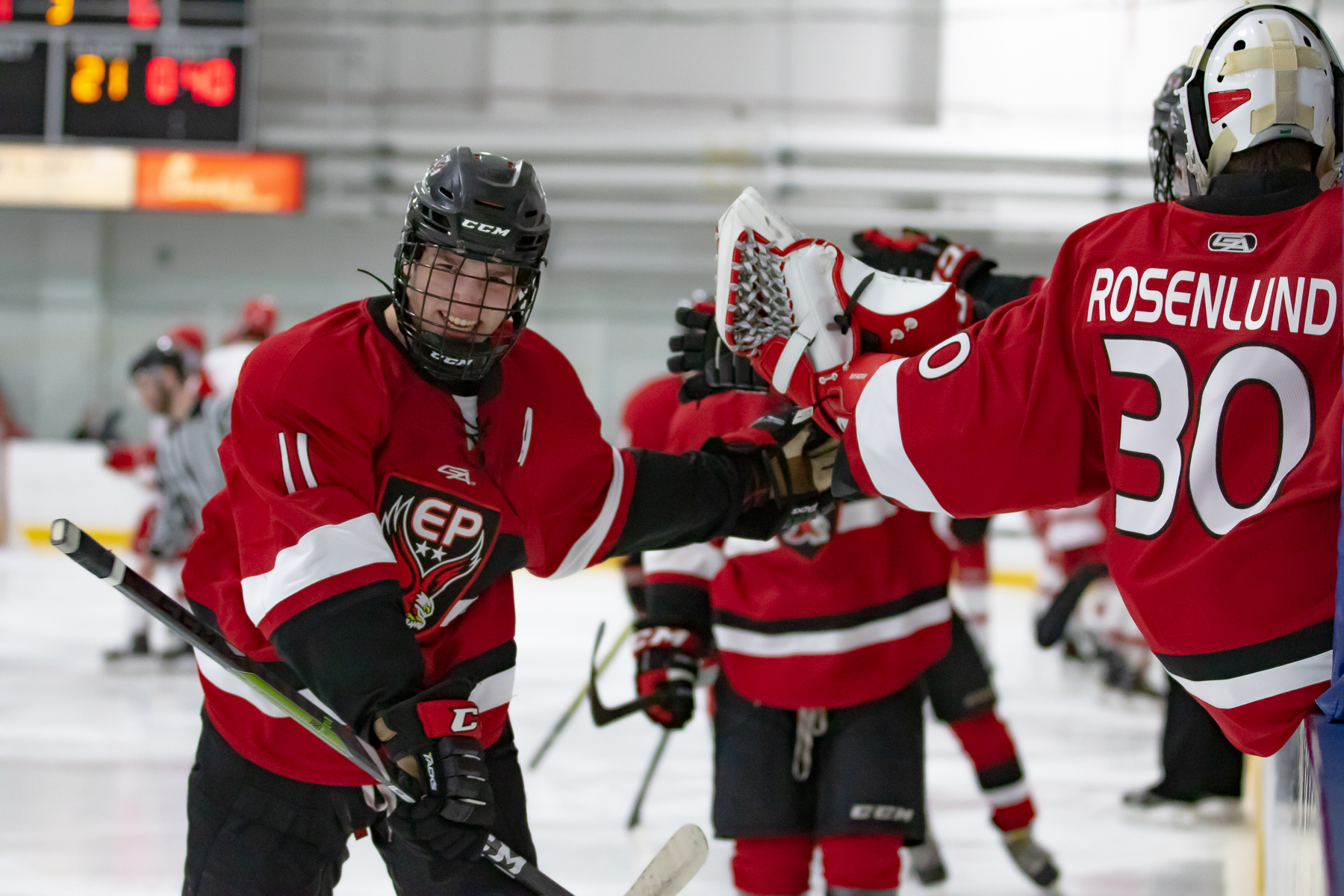 Eden Prairie's Carter Batchelder celebrates with his teammates after scoring a short-handed goal in the third period to put the Eagles up 6-2. Photo by Gary Mukai, SportsEngine

The onslaught started early, as Eden Prairie’s John Mittelstadt scored fewer than 90 seconds into the game. Ben Steeves made it 2-0 in favor of the Eagles (17-5-1, 6-2-0) just under 10 minutes into the first period, scoring on the first power play of the game.

The Red Knights’ Cooper Gay recorded his team-leading 17th goal of the season just 93 seconds later, and it looked like Benilde-St. Margaret’s, ranked No. 7 in the Class 2A’ coaches’ poll, was back in the game.

The No. 3-2A Eagles ended all hope of a Benilde-St. Margaret’s (14-7-2, 4-1-0) comeback in the second period, however, as they notched a goal at even strength, another on a power play, and a third short-handed in the period, showcasing their dominance in all phases. Steeves had two of the goals, giving him a hat trick to put his goal total up to a team-high 27 for the season, while Mittelstadt scored his second goal of the game, giving him 17 tallies on the year.

The exclamation point came 26 seconds into the third period, as Luke Middelstadt played an inch-perfect pass to set up Carter Batchelder for a short-handed goal. It was Luke Middelstadt’s third assist of the game, his 23rd of the season. 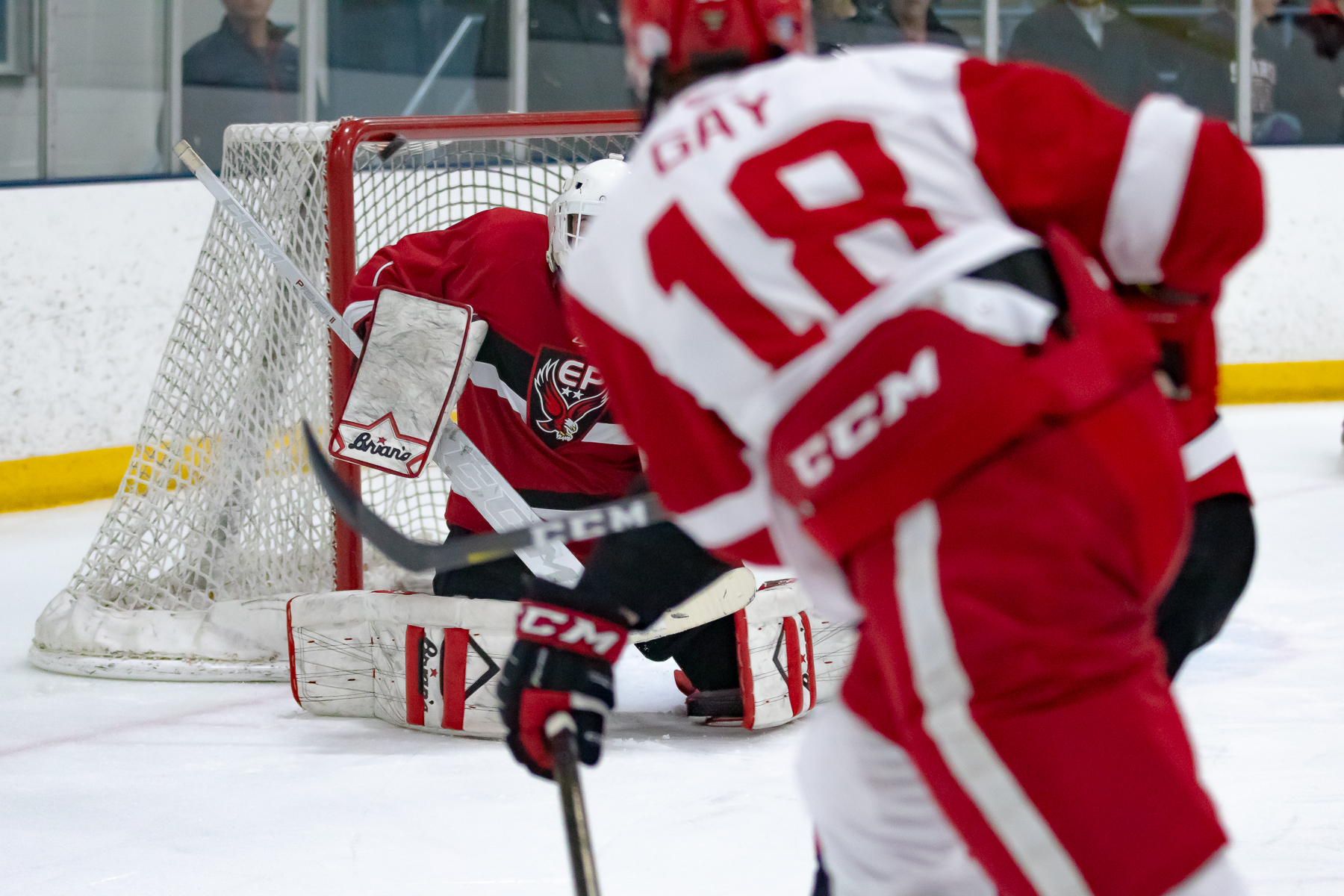