The private school team, which drew a No. 3 section seed in its second year offering varsity hockey, insists it’s not like another Vadnais Heights program that ran afoul of eligibility rules. 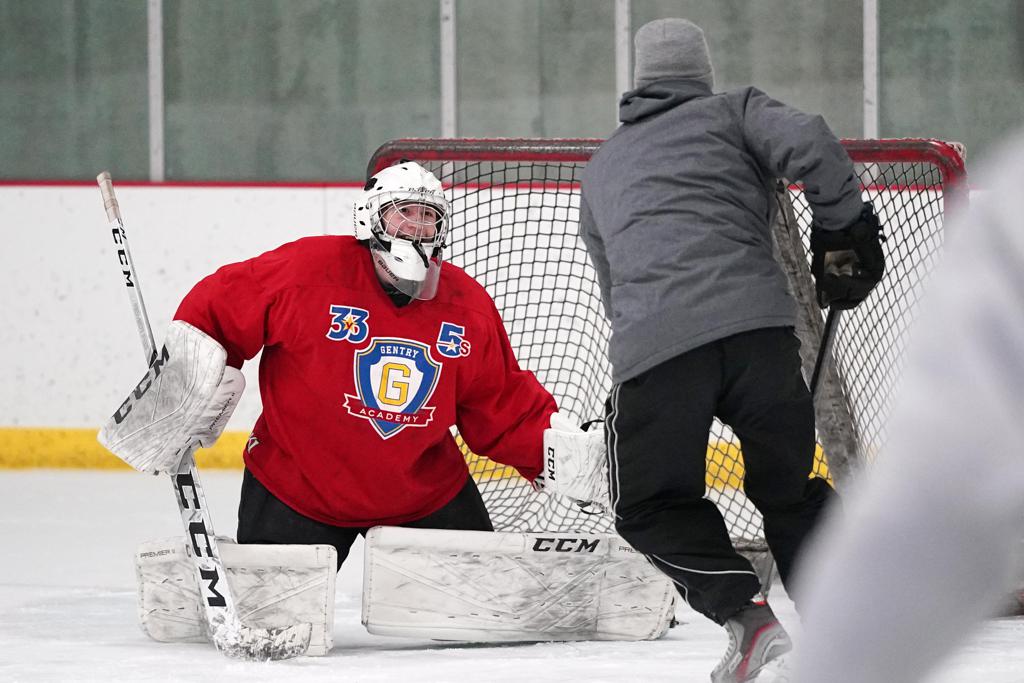 The Stars (21-4) received the No. 3 seed in Class 1A, Section 4 after winning six of their seven games against section opponents. Last season the team finished 13-12.

Winning over some members of the hockey public has been tougher for the private school, where students in fifth through 12th grade pay $15,000 a year to attend a three-level school building across a parking lot from the Vadnais Sports Center in Vadnais Heights.

The sports complex — not the school building — is the former home of Achiever Academy, Minnesota’s first online high school set up to provide intensive hockey training.

That proximity, coupled with Gentry Academy’s hockey profile, helps fuel memories of 2014, when Achiever Academy, on the eve of a section championship game, withdrew its strong girls’ hockey team from competition amid allegations that several of its players had violated Minnesota State High School League bylaws regarding eligibility for transfer students.

Achiever Academy left the league a few months later, but its quick rise and fall lingers as a cautionary tale among hockey observers of the pitfalls facing sports-oriented schooling efforts.

Jen Kurth, education director at Gentry Academy, bristled at any suggestion of comparing the two programs.

“Gentry Academy is nothing like Achiever Academy,” Kurth said. “We went through a 2½-year process to become an accredited institution in a traditional school setting with a heavy focus on rigorous academics and leadership. All of our classes are taught by our licensed teachers.”

While Achiever Academy offered up to three hours of hockey training during the school day, Gentry Academy’s 120 students are permitted to play hockey about one hour per day at the Vadnais Sports Center as a physical education option. Players do not receive formal instruction during the school day, said Joe Jensen, school activities director.

Gentry Academy offers both varsity hockey, which competes under the high school league auspices and is nicknamed the Stars, and a U-16 open boys’ team. The latter team, known as the Galaxy, plays games throughout the country. Galaxy players include Cruz Lucius, son of school founders Tami and Chuck Lucius, and Kurth’s son Connor. Both forwards have made verbal commitments to the Gophers.

The Stars’ varsity roster competing for a state tournament appearance includes players from Edina, Fridley, Stillwater and Worthington, plus families that moved to Minnesota from Grand Forks, Vancouver and Washington, D.C.

“ ‘This might not look right,’ or ‘Can we get a little more information on this?’ ’’ Jensen recalled being told. “But I would say we would be no different than any other school that has someone come in as a transfer.”

Erich Martens, high school league executive director, and associate director Craig Perry wrote in a joint e-mail that the league works with all schools “to ensure they are appropriately applying and following MSHSL rules, policies and bylaws.” They declined to comment about any discussion with Gentry Academy, citing data privacy laws.

After this season, Gentry Academy plans to dissolve its Galaxy U-16 program. Some players are expected to join the varsity team for 2020-21 to fill out the roster. Joe Cullen coaches the Stars’ varsity team.

“Dissolving the team was not the plan all along,” Jensen said. “It has just happened over time as the original players are moving on and new student-athletes to the school want to participate in the MSHSL.”

Jensen said Cruz Lucius and Connor Kurth are two of “several” Galaxy players who will be “leaving for juniors, and those that desire to play travel hockey will be leaving. The timing is perfect and allows Gentry to field a full varsity team, not displace current student-athletes, and give the school’s full support to the MSHSL.”

Jon Ammerman, Moorhead coach and president of the Minnesota Hockey Coaches Association, said he has “no issues” with, or questions about, the decision.