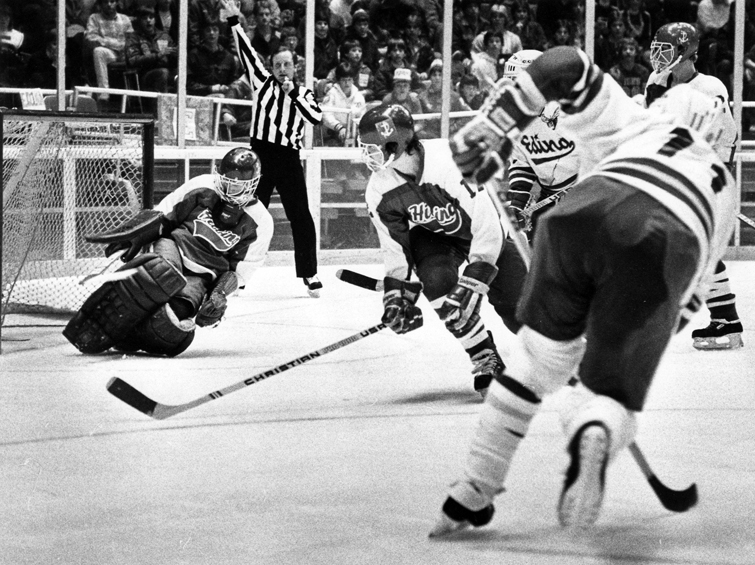 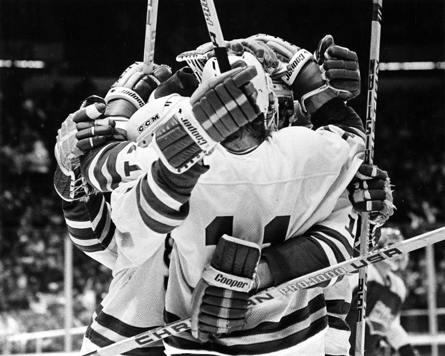 Paul Ranheim (11) is congratulated by teammates after scoring against Hibbing in the 1984 state tournament semifinals. Star Tribune file photo

The puck was fired deep into the Edina zone, and Paul Ranheim was hustling back to get it.

This is the part of the Hornets’ power play the overflow crowds at Braemar Arena liked most.

Ranheim circling behind the goal, building speed, skating so fast his jersey rippled in the self-induced wind tunnel.

“We had huge crowds at Braemar for pretty much all our games back then,” said Peter Hankinson, who was a sophomore in 1983-84, Ranheim’s senior season. “Everyone would get on their feet when Paul would ramp it up.”

Willard Ikola, who coached Edina for 33 years and led the Hornets to eight state championships before retiring in 1991, can count on one hand (with fingers to spare) the Edina players he coached who had the speed to match Ranheim’s.

Paul Ranheim scored 87 goals in four seasons at the University of Wisconsin.

“He was really quick,” Ikola said. “I would compare his speed with Bobby Krieger and Mike Lauen. That would have been quite a race.”

“I just remember him being so darn tough,” said former longtime Bloomington Jefferson coach John Bianchi. “He’s one of the Edina players that really stood out for his toughness.”

Toughness in Ranheim’s case had nothing to do with raised elbows or flying fists.

A gritty defensive player who knew when to take the body and was exceedingly difficult to knock of the puck, Ranheim was no fun to line up against.

“Toughness for Paul wasn’t him going out there knocking guys over or trying to blow guys through the boards,” said Hankinson, who played against Ranheim in college. “It was more about playing it the right way, always being in the right position. Mentally and physically he just never took a shift off.”

Edina’s two public high schools, East and West, merged into one in 1981. Ranheim was a sophomore that winter, when hundreds of players showed up for Hornets tryouts. The 17 coveted varsity spots went almost exclusively to seniors, with a few juniors added to the mix.

Ranheim, a prodigal talent as a youth hockey player, was relegated to spending the season on the junior varsity. Ikola says he kept a close watch on Ranheim that season.

“(Ranheim) was the best skater on the JV team, and Bob was not going to give him up.”

Although a dominant varsity player from the moment he stepped on the ice as a junior, Ranheim never assembled mind-blowing numbers. He scored 12 goals and added 25 assists in 26 games as a junior and put up 40 points (16 goals, 24 assists) as a senior.

Ranheim played in two state tournaments. The outcomes for the Hornets were vastly different.

In one of he biggest upsets in state tournament history, Edina was shut out 2-0 by Columbia Heights and aptly named goaltender Reggie Miracle in 1983.

There were no such hiccups the following season, as Ranheim scored two goals and added an assist in the Hornets’ 7-0 quarterfinal rout of Roseau. Ranheim had a goal and two assists as Edina beat Hibbing 5-1 in the semifinals. His goal late in the third-period helped clinch the Hornets’ 4-2 championship-game win over Bloomington Kennedy.

Ranheim’s seven points were the most in the tournament.

“He was just a go-to guy,” said Chris Bonvino, a Hornets’ senior in 1983-84. “They always had him marked, but it didn’t matter because they couldn’t stop him.

“He wasn’t the guy who was a prima donna who needed to be fed the puck all the time. He would dish it. And he played both ends of the rink.”

Ranheim, who also played varsity football and soccer at Edina, was heavily recruited as a senior. Chosen 38th overall by the Calgary Flames in the 1984 NHL Draft, Ranheim scored 11, 16, 24 and 36 goals in his four seasons at the University of Wisconsin.

He played for Salt Lake in the International Hockey League in 1988-89, when he amassed a stunning 68 goals in 75 games. He was called up to the NHL the following season by the Calgary Flames and never again played in the minor leagues. Ranheim played in 1,013 regular-season NHL games during his 14 seasons.

He lives in the Twin Cities and works for Edina-based Gemini Athletic Wear, Inc.