Trailing 1-0 after the first period, Ben Steeves scored a pair of goals in the second period to help his Eagles sink the Skippers and advance to the Class 2A, Section 2 championship game. 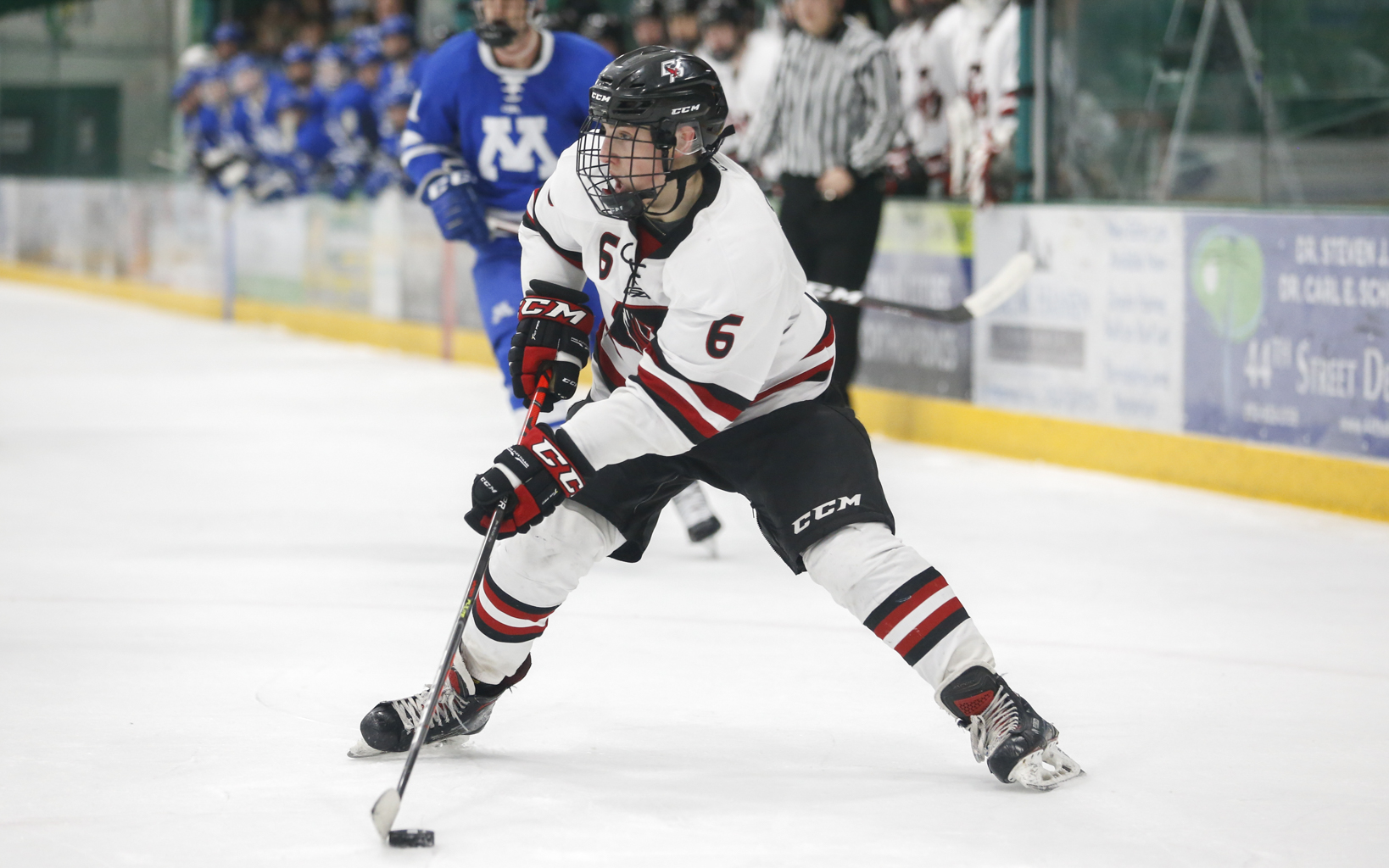 Eden Prairie's Ben Steeves (6) looks for a passing lane against Minnetonka Saturday afternoon. Steeves had two goals and an assist in the Eagles 6-1 victory over the Skippers at Braemar Arena. Photo by Jeff Lawler, SportsEngine

With Eden Prairie in desperate need of a goal, senior forward Ben Steeves took aim and fired. Never mind that he was deep inside the Zamboni room. Or was that circus shot unloaded from behind the concession stand?

For the sake of probability, Steeves might as well have been located somewhere in downtown Waconia when he whipped his second-period wrister in off the crossbar to give the Eagles (21-5-1) a jolt of much needed energy on their way to a 6-1 triumph over Minnetonka (13-13-1) in a Class 2A, Section 2 semifinal on Saturday afternoon at Braemar Arena in Edina.

In truth, Steeves, one of the 10 Mr. Hockey award finalists announced on Friday, was standing on the goal line — deep in the corner — when he tied the score at 1 with the first of his two goals.

“If there’s a kid that can do it, it’s gonna be him and it’s not because of luck,” Eden Prairie coach Lee Smith said about Steeves’ seemingly improbably goal. “It’s because of a lot of practice both in his driveway and on the rink. He always says he makes up for his size with work ethic.” 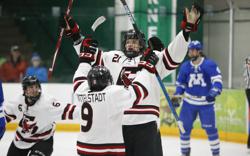 The 5-foot-8, 150-pound Steeves, a New Hampshire native who played for the Michigan Grizzlies’ AAA midget team last season, has scored 16 of his 33 goals in the Eagles’ last nine games. Not bad for a kid who found himself in the west metro for the first time this summer because of a family move precipitated by his father’s change in jobs.

Steeves, who committed to play at Minnesota Duluth during the regular season, was initially planning on playing junior hockey in the USHL this winter but the coach there suggested Steeves play a year of high school hockey instead. A highly successful relationship with Eden Prairie senior John Mittelstadt developed soon after.

“I heard he played for a pretty good (midget) team,” Mittelstadt said. “I didn’t know what I was getting into, but I was like, ‘Alright, you wanna come out and skate with me?’”

“We played (in Eden Prairie’s summer program) together. We went out there and scored three goals in the first shift together. It was the funniest thing ever, that we played so well together. And it has just stuck ever since.”

Steeves, who scored a hat trick in his first varsity game, said he’s honored to be a Mr. Hockey finalist.

“But until the season is over my focus is winning the title,” Steeves said. “That out there, our team giving that effort — our team is going to win it all if we keep doing that.”

Steeves added a second goal in the middle period, then two more Eden Prairie goals in the period’s closing minute staked the Eagles to a 4-1 advantage entering the third period. Two more goals in third-period garbage time clinched the victory that included a lockdown effort on the Skippers’ Teddy Lagerback, who scored Minnetonka’s lone goal in the first period but was held mostly in check the rest of the afternoon.

“At this time of the year you do need secondary scoring, and if you don’t get it you’re probably not going to separate,” Minnetonka coach Sean Goldsworthy said. “Clearly Teddy is a marked guy on our team because he can score."

Goal scorers were a rare breed this season among Lake Conference teams, which played such airtight defense it seemed as though 1-1 became the default score. League coaches joked that every game became “a race to two.”

Eden Prairie and Minnetonka both toiled in the Lake this season. The Eagles, with Steeves and Mittelstadt each having scored a team-best 55 points, are the rare team with a handful of gifted finishers.

“They can catch up pretty quick,” Goldsworthy said. “They’re a handful.” 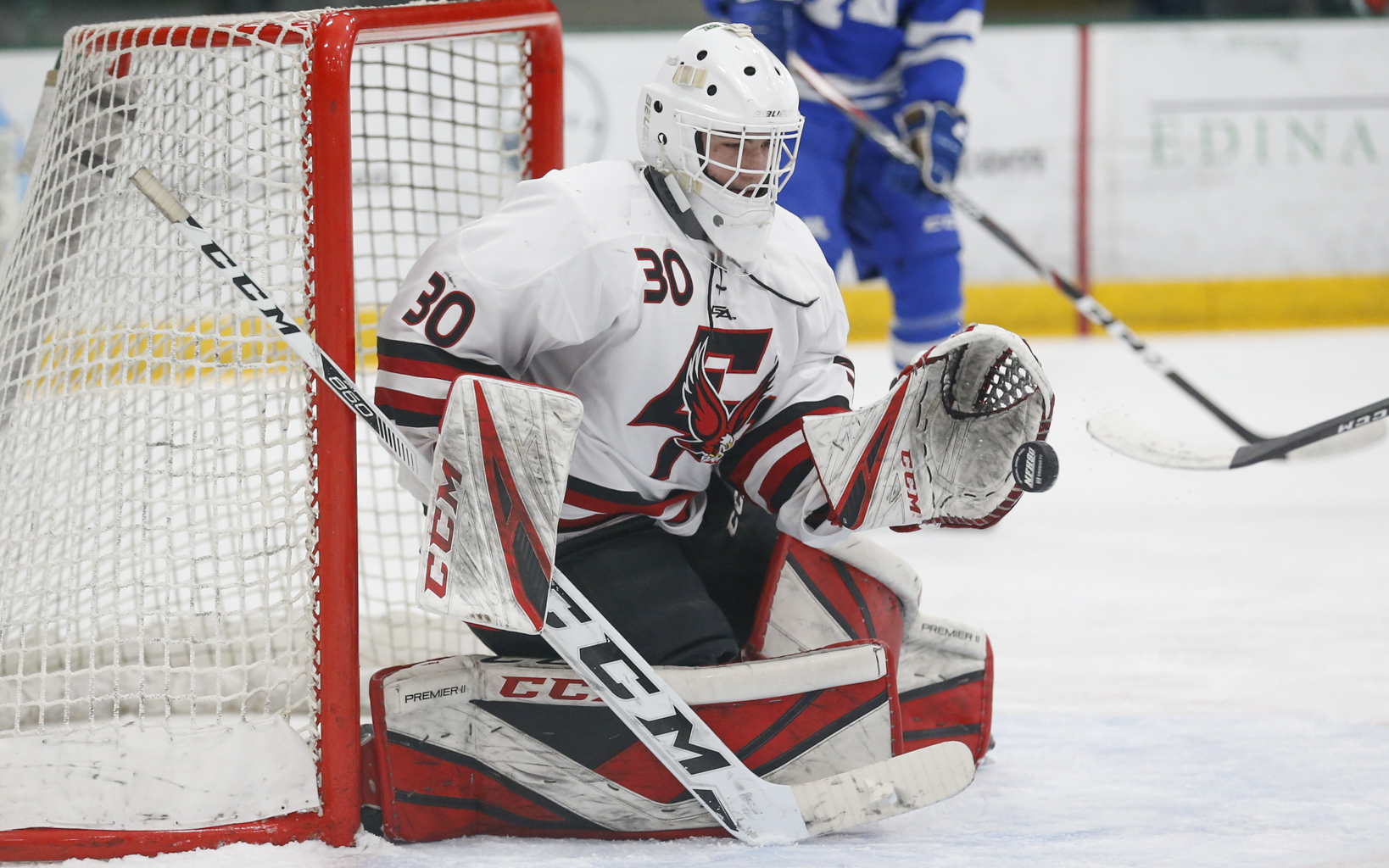 Eden Prairie's Axel Rosenlund (30) makes a glove save late in the third period against Minnetonka. Rosenlund had 24 saves in the Eagles’ 6-1 victory over the Skippers. Photo by Jeff Lawler, SportsEngine

Senior forward Ben Steeves, one of 10 Mr. Hockey award finalists, scored twice to lead a four-goal Eden Prairie outburst in the second period as No. 2-seeded Eden Prairie rallied past No. 3 Minnetonka 6-1 on Saturday afternoon in a Class 2A, Section 2 semifinal at Braemar Arena in Edina.

Steeves’ first goal came when he unloaded a shot from deep in the corner, just in front of the goal line. The puck banged in off the crossbar to tie the score at 1-1 just 1:32 into the second period.

Steeves scored again four minutes later to put the Eagles (21-5-1), ranked No. 3 in the state Class 2A coaches’ poll, ahead 2-1, and goals by junior Carter Batchelder and senior John Mittelstadt 31 seconds apart in the final minute of the period made it 4-1. Batchelder’s goal came on a power play.

Junior forward Riku Brown added a power-play goal for Eden Prairie with 4:03 left in the third and Eagles junior defenseman Will Britton shot into an empty net with 2.3 seconds left to complete the scoring.

Senior forward Teddy Lagerback drilled a shot from the high slot in off the crossbar to give the Skippers (13-13-1) a 1-0 lead with 7:26 left in the first period. Minnetonka also was effective in killing a Lagerback hooking penalty, limiting Eden Prairie’s chances and zone time. It was the only penalty called in the first, when Minnetonka outshot Eden Prairie 12-11. 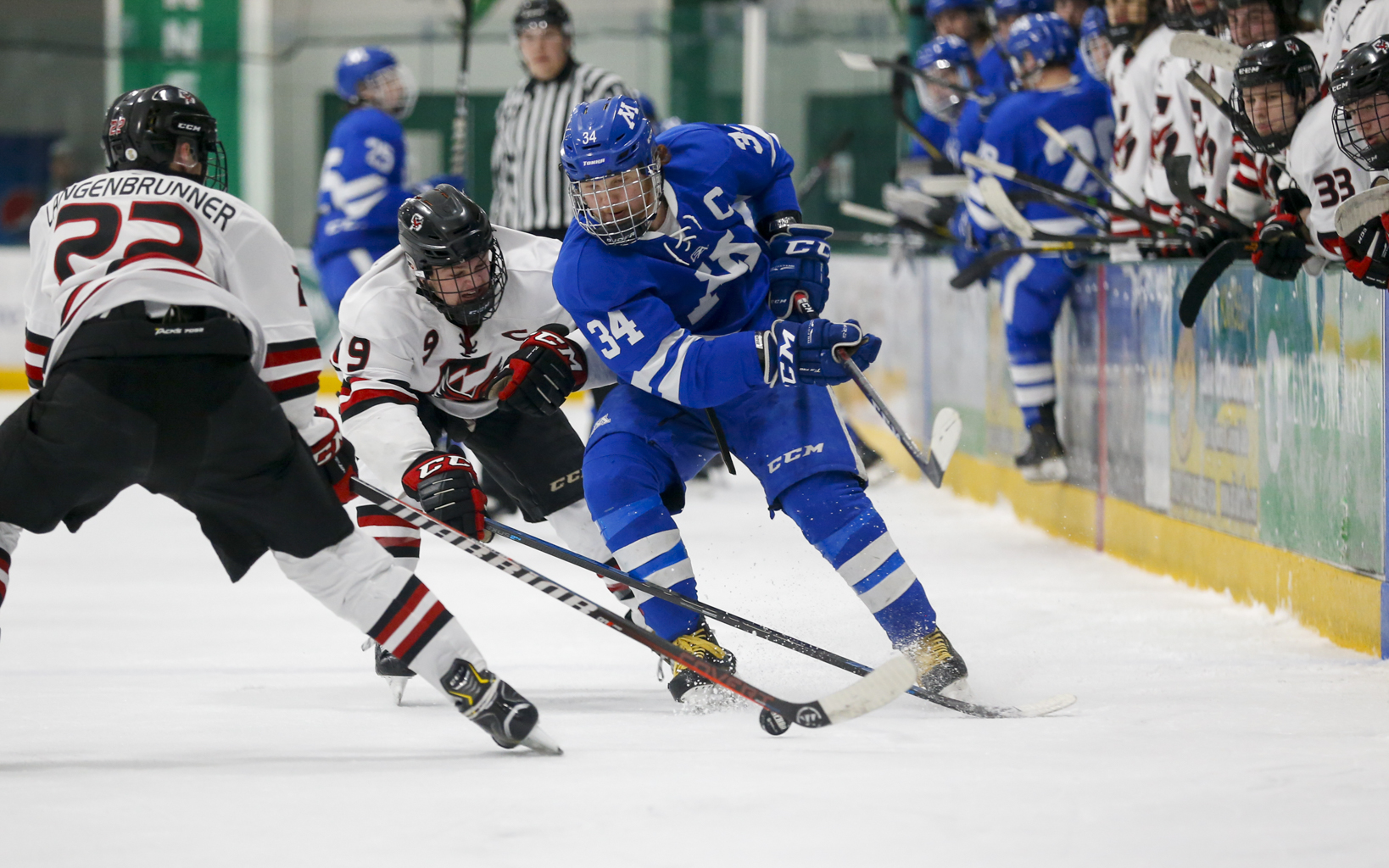 Minnetonka's Teddy Lagerback (34) battles two Eden Prairie defenders as he crosses into the offensive zone Saturday. Lagerback had the lone goal for the Skippers in their 6-1 loss to the Eagles at Braemar Arena. Photo by Jeff Lawler, SportsEngine