Volatile sections approach finals with No. 1 anything but certain

Two top seeds are out in Class 2A, one them thanks to surprising Chaska. State tournament spots are on the line starting Wednesday with a double-header at 3M Arena at Mariucci. 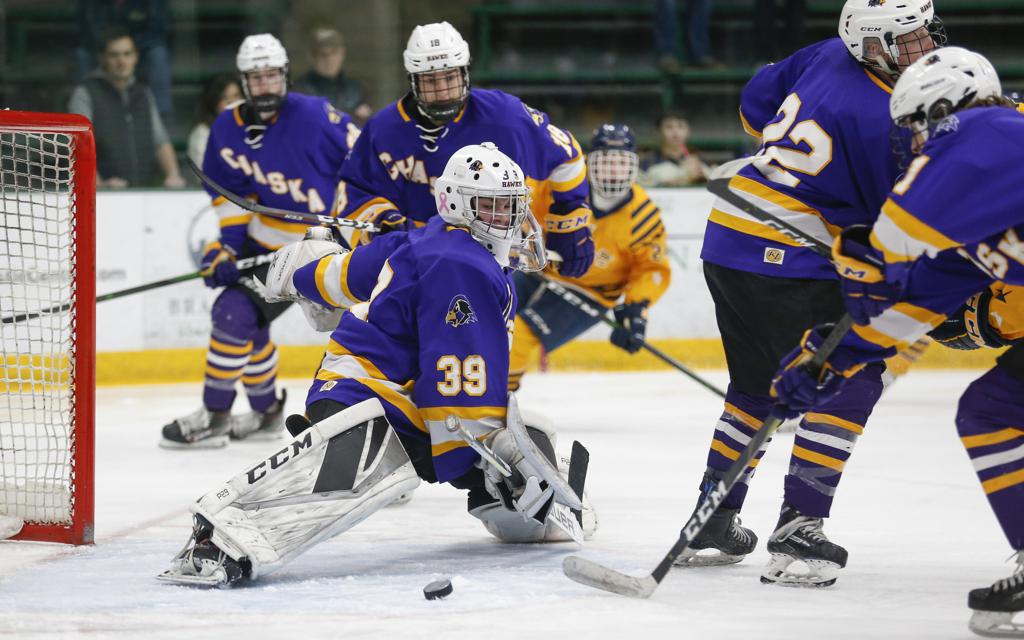 Chaska goalie Carter Wishart (39) lunges toward a loose puck as it slides across the crease during Saturday afternoon’s game against Prior Lake. Wishart had 19 saves in the Hawks’ 4-1 victory over the Lakers. Photo by Jeff Lawler, SportsEngine

All season long, talented boys’ hockey teams seemingly treated the No. 1 ranking in Class 2A like tape applied over the socks and shin guards. They wore it for a game before tossing it in the trash.

Andover, the current team atop the Let’s Play Hockey poll, has been there at least once this season. So has Eden Prairie. And Rosemount. And White Bear Lake. As the section playoffs reach their climax this week, the question of who actually wants to be No. 1 continues.

Top-seeded Prior Lake and Rosemount are out of their respective sections, the most striking examples of a volatile postseason.

The doubleheader from 3M Arena at Mariucci continues at 8 p.m. No. 4 seed Chaska foiled an anticipated Prior Lake/Eden Prairie showdown by dumping the Lakers in the semifinals. The Hawks, who lost standouts Rhett Pitlick and Mike Koster from last year’s strong squad, earned their first section final opportunity since 1996-97.

No. 2 seed Eden Prairie, featuring Mr. Hockey Award candidate Ben Steeves, has surged since adding forward Jackson Blake to the lineup. Forced to sit out after transferring back home from Shattuck-St. Mary’s, Blake made his Eagles’ debut Jan. 30. They are 8-1 since, averaging 5.6 goals per game.

Thursday’s slate of four big-school section finals includes Section 3, where No. 2 seed Burnsville is now favored after No. 5 seed St. Thomas Academy stunned top seed Rosemount in the semifinals. The underdog Cadets are in their first season under coach Trent Eigner, who led Lakeville North to an undefeated championship season in 2015.

Other surprise matchups include Section 1, where No. 3 seed Hastings makes its first section final since 2011-12. The Raiders face defending section champs and top seed Lakeville South.

And live from Amsoil Arena in Duluth, top seed Andover tussles with No. 6 seed Elk River/Zimmerman. No Elks team has come this far since 2014-15. Duluth East, the de facto home team, got bounced in the section quarterfinals for the first time since 1993.

Fear not, purists concerned about a lack of northern representation in the state tournament. Either Moorhead or Roseau, longtime playoff rivals, will emerge from Section 8.

In Class 1A, No. 2 seed Mankato West and No. 4 Mankato East will play for a trip to state, plus community bragging rights … in Rochester.

Section 4, primarily made up of metro area teams, plays the semifinal round Wednesday. No. 1 seed Mahtomedi is alive, but not No. 2 St. Paul Johnson and No. 3 Gentry Academy. In their place, either No. 6 South St. Paul or No. 7 St. Paul Academy will advance to Friday’s section final.