The Hawks were stifled by Hunters goaltender Shawn Easty for the first two periods, but they broke through in the third with five goals to secure the shutout victory. 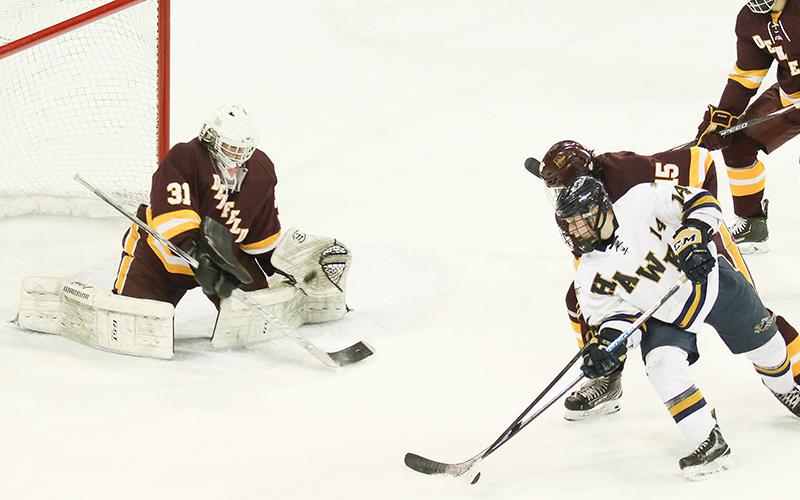 DULUTH — One of the top hockey players in the State of Hockey, Blake Biondi could have left Hermantown early and spent his senior season elsewhere.

A Mr. Hockey hopeful who is committed to two-time defending national champion Minnesota Duluth, the senior forward wasn’t interested in bailing on the Hawks. A year after Hermantown was stunned in the Class 1A, Section 7 championship, he and his teammates had unfinished business.

They took a step in the right direction Wednesday night at Amsoil Arena, where Biondi and the Hawks rode a decisive, five-goal third period to fend off Duluth Denfeld 6-0 and reclaim their spot atop this section, which they had a stranglehold on for so long until being upset by Greenway in 2019.

“This is the reason I came back,” Biondi said. “I wanted to win a state championship, and we got three more to go.”

Top-seeded Hermantown (21-3-4), ranked No. 2 in the Class 1A coaches’ poll, returns to next week’s state tournament after a one-year hiatus. The Hawks appeared at Xcel Energy Center every year from 2010-18, finishing runner-up the first six trips before winning back-to-back crowns in 2016 and ’17, then bowing out in the semifinals in 2018.

Biondi is the catalyst. The smooth-skating veteran scored twice against the second-seeded Hunters (21-6-1), which made a game of it for the first 34 minutes thanks to the steely play of goalie Shawn Easty. The senior did everything he could to keep No. 7-1A Denfeld afloat. Seeking their first state berth since going three times from 1986-89, the Hunters were outshot 20-2 in the second period alone and 50-10 for the game.

But they trailed just 1-0 entering the third.

“He stood on his head and kept us in the game,” said Denfeld coach Dale Jago of Easty.

Eventually, Hermantown’s superior depth took over as the Hawks held a lamp-lighting party to start the final stanza. Aydyn Dowd tallied on a wrist shot from the left faceoff circle at the 2:04 mark and Zach Kilen cleaned up a scrum 21 seconds later for his second of the night. Biondi, playing on his future home ice and in front of UMD coach Scott Sandelin, made it 4-0 at 3:59 of the period when he notched his 42nd goal of the season. He’d later tack on his 43rd.

“We ran out of gas,” Jago said. “We basically went four defenseman and two lines, two and a half lines, mixing here and there. But our guys were gassed. They just kept coming in waves.”

Easty and junior Jacob Snyder shared time in net for the Hunters this winter.

“We have the two best goalies, as far as I’m concerned, in northern Minnesota,” Jago said.

For his part, Biondi certainly ranks among the top skaters, and not merely in the northern part of the state. One of 10 finalists for the prestigious Mr. Hockey award, Biondi is approaching 90 points in his last season in a Hawks sweater.

Hermantown coach Patrick Andrews was asked what the pulse of his club was like after the first two periods. The Hawks had thrown everything they could muster at Easty and the Hunters, but were clinging to a slim lead. Were they starting to grip their sticks a little too tightly with visions of last February's double-overtime Greenway game dancing in their heads?

There was no such redux Wednesday night. Hermantown opened the floodgates and pulled away in front of an announced crowd of 4,800.

“What a difference a year makes,” Andrews said. “For 365 days, I thought about this. It’s a great relief, but it’s great excitement, too. I’m just happy for (my players).

“We don’t take this for granted. Last year taught us how hard this is.” 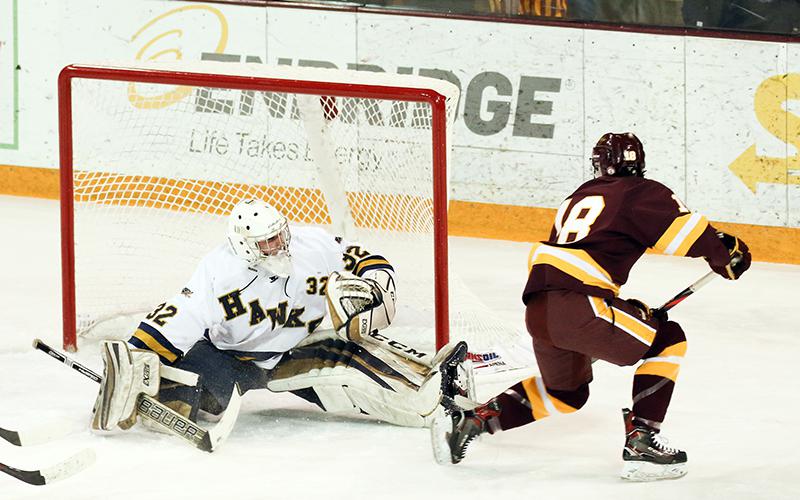 The top-seeded Hawks, ranked No. 2 in the Class 1A coaches’ poll, scored four times in the opening 6:30 of the final stanza to blow this one open. Aydyn Dowd scored on a wrist shot from the left faceoff circle at the 2:04 mark and Zach Kilen cleaned up a scrum 21 seconds later for his second of the night.

Mr. Hockey hopeful and Minnesota Duluth recruit Blake Biondi made it 4-0 at 3:59 of the period when he notched his 42nd goal of the season. He’d later tack on his 43rd.

Despite holding a slim 1-0 edge after two periods, Hermantown was dominant throughout. The Hawks (21-3-4) amassed a 20-2 advantage in shots on goal in the second period alone and finished with a staggering 50-10 lead. Easty, a senior, did all he could to give the second-seeded and Hunters (21-6-1) a chance.

But Hermantown’s superior depth eventually wore down Denfeld, which was seeking its first state tournament berth since appearing three times from 1986-89.

The Hawks, of course, have had a stranglehold on this section. They went to state nine years in a row from 2010-18, finishing runner-up the first six years before winning a pair of titles in 2016 and ’17. They bowed out in the semifinals in 2018 and were upset by Greenway in last season’s section title tilt.