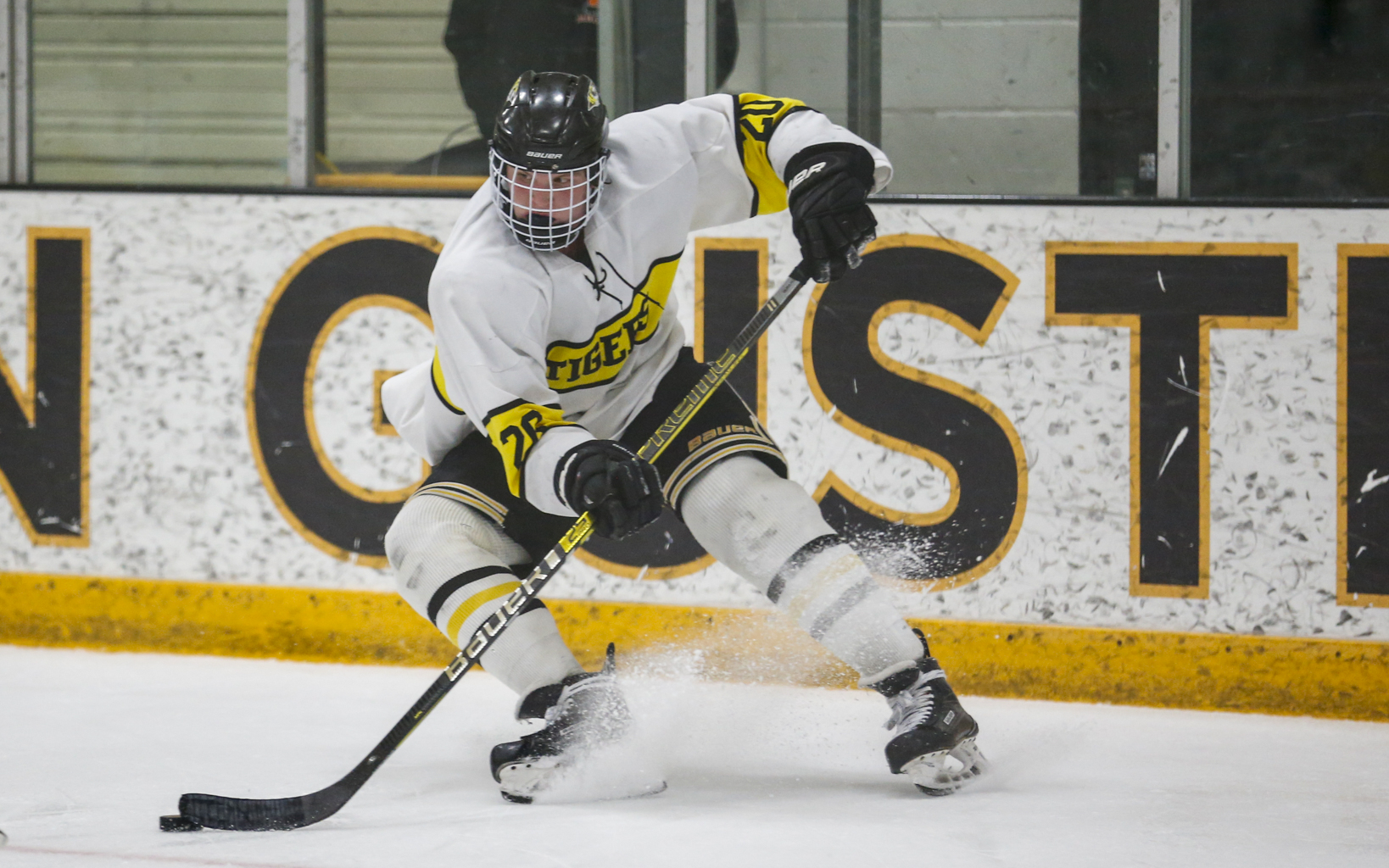 Hutchinson's Tristan Hoppe (20) stops behind his own net during Wednesday night’s Class1A, Section 3 final against Litchfield/Dassel-Cokato. Hoppe put the Tigers ahead for good in their 8-1 victory over the Dragons. Photo by Jeff Lawler, SportsEngine

Hayden Jensen is a senior. He’ll get his high school diploma in the spring, although if Hutchinson coach Matt Telecky had his way … maybe not.

‘He’s been fabulous for three years,” Telecky said Wednesday after Jensen scored twice in the third period in the top-seeded Tigers’ 8-1 triumph over No. 2 seed Litchfield/Dassel-Cokato in the Class 1A, Section 3 championship at Gustavus Adolphus College in St. Peter. “The goal is to graduate him … but we’re definitely going to miss him.”

At this point you can picture the wheels turning in Telecky’s head — hmmm, if we could keep Jensen in school by altering his birth certificate or creating a new identity, then craft a foolproof disguise … we’d be going to state every year!

Leaders like Jensen just don’t come around that often, as Telecky, in his 16th season coaching the Tigers, can attest. 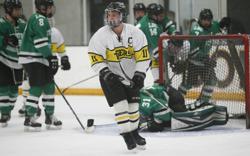 “He’s the guy that pushes the pace at practice, and he’s always that kid, when guys aren’t working like they have to, he’s the first one they hear from,” Telecky said.

Jensen can score some, too. His 20 goals ranks second for the Tigers (19-8-1), and his back-to-back tallies were part of a six-goal third period that pushed Hutchinson to the running-time victory. Jensen walked off the Don Roberts Arena ice cradling the section championship trophy, then talked about his mindset entering the game.

“I just wanted to give it everything I have, because if it is my last game I don’t want any regrets,” he said.

No regrets. Sounds like a good rallying cry for the Tigers, who will be making their first state tournament appearance since 2009 and fifth overall. Seniors, after all, have played an integral role in the Tigers’ success all season — Wednesday night included.

Senior Austin Jozwick also scored twice against the Dragons (12-15-1), giving him a team-best 33 this season, including a whopping eight in three playoff games.

“I really don’t have any words to describe it, especially how it ended there,” Jozwick said about winning the section title. “It’s just something you don’t expect. It’s the best moment of my life.”

Juniors made their contributions, too, for the Tigers. Tristan Hoppe stepped out of the penalty box, caught a pass at center ice and cruised in for a breakaway goal late in the second period to put Hutchinson ahead 2-1.

“After you are on a power play, and all of a sudden they score, that kind of breaks your back a little bit, too,” Litchfield/Dassel-Cokato coach Brice Berggren said after the Dragons lost for the third time in three tries this season against their archrival.

Hutchinson had played most of the first two periods in the Litchfield/Dassel-Cokato end, and the Tigers misfired on several golden scoring opportunities. Still, all that forechecking pressure had a cumulative effect. As did Hutchinson’s vow to seize control early in the third.

“During intermission we decided we wanted this more than anything else, and we had to go get it.”

And that’s what the Tigers did, with Blake Schmidt scoring 1:03 into the third and Logan Holtz adding another goal less than 2 minutes later. The rout was on, and a rallying cry was born. 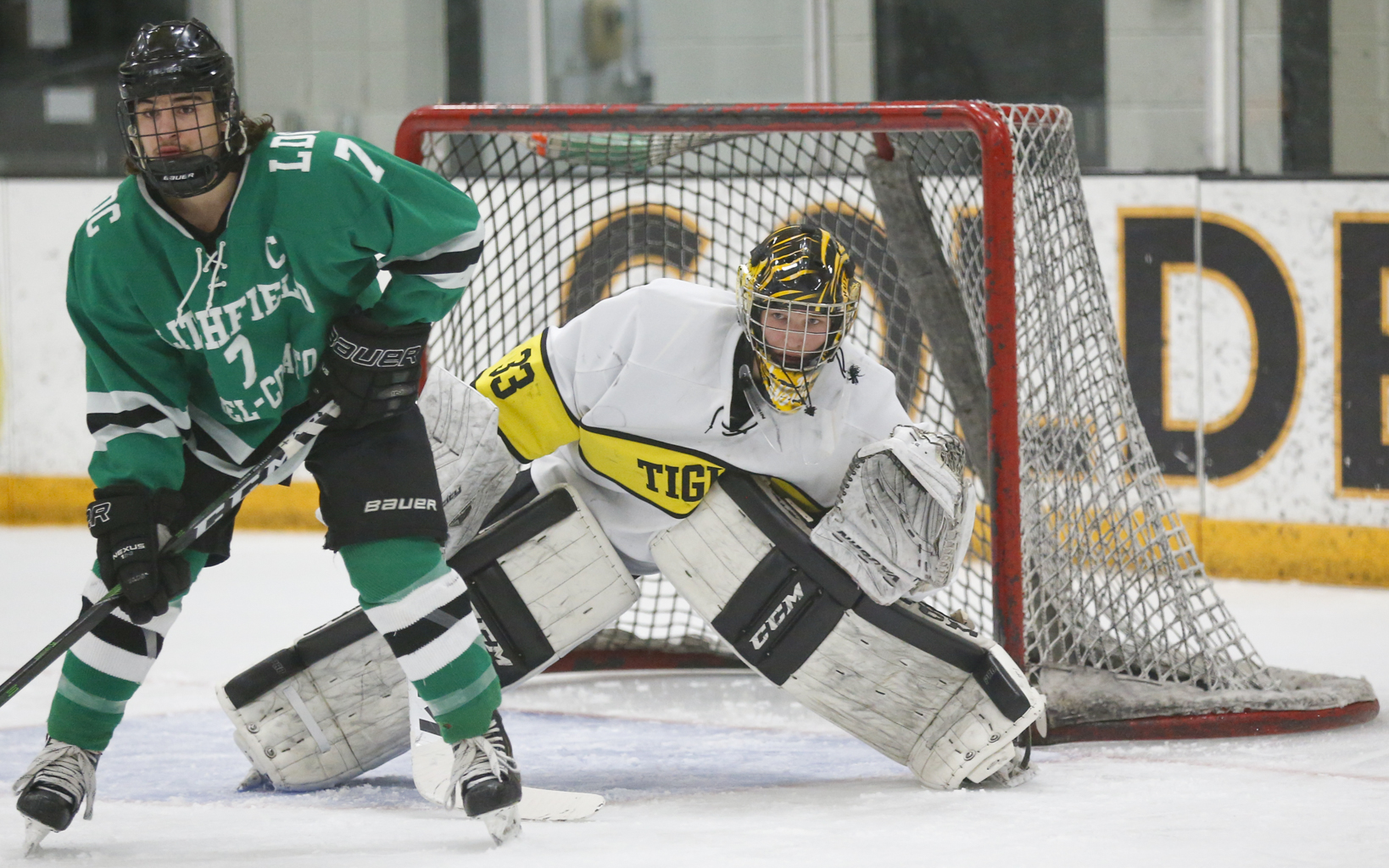 Hutchinson goalie Austin Hagen (33) tries to see around the screen being set by L/D-C's Cole Evjen (7) during Wednesday night’s game in St. Peter. Hagen had 23 saves in the Tigers’ 8-1 victory over the Dragons. Photo by Jeff Lawler, SportsEngine

Seniors Hayden Jensen and Austin Jozwick each scored twice as top-seeded Hutchinson rolled past No. 2 seed Litchfield/Dassel-Cokato 8-1 on Wednesday in the Class 1A, Section 3 championship at the Lund Center on the Gustavus Adolphus College campus in St. Peter.

Jensen scored twice and Jozwick once in the third period as part of an avalanche of six unanswered goals for the Tigers (19-8-1).

Junior defenseman Tristan Hoppe stepped out of the penalty box, caught a long pass and streaked in for a breakaway goal to put Hutchinson ahead 2-1 with 4 minutes remaining in the second period. Gavin Hutchins, a sophomore defenseman, fired the pass that found Hoppe at center ice and sent him in alone. The goal was Hoppe’s ninth of the season.

The teams traded goals in the first period, with Hutchinson scoring first on a close-range shot from senior forward Austin Jozwick. The goal came at 12:09, 15 seconds after the Tigers had killed the game’s first penalty, a roughing call on Alex Staples.

Sophomore forward Gavin Hanson opened the scoring for Litchfield/Dassel-Cokato (12-15-1) with 3:20 left in the opening period.

Hutchinson will be making its fifth state tournament appearance and first since 2009. 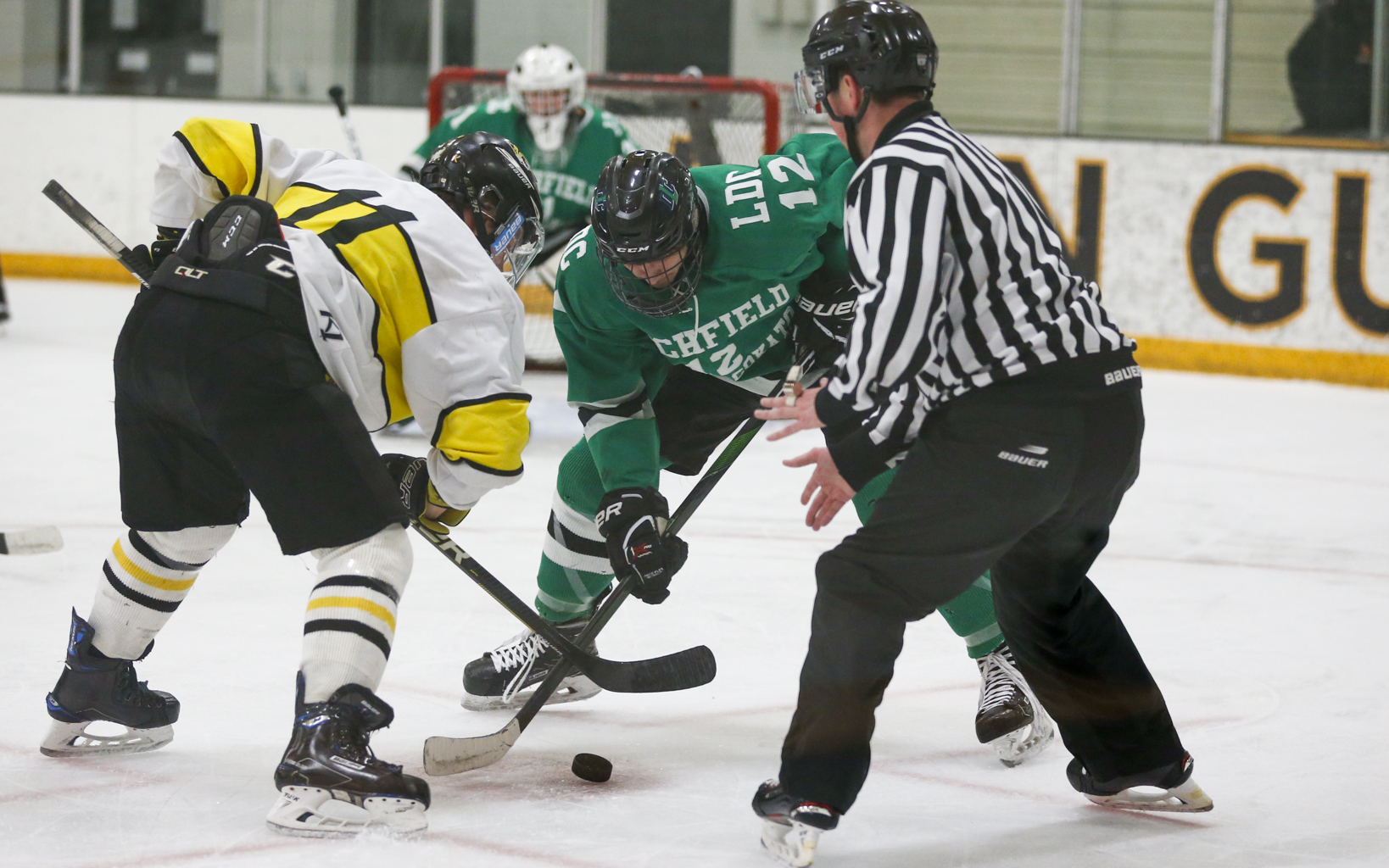 Litchfield/Dassel-Cokato's Jake Johnson (12) battles Hutchinson's Hayden Jensen (11) for control of a faceoff during Wednesday night’s Class 1A, Section 3 final at Gustavus. The Dragons fell to the Tigers 8-1. Photo by Jeff Lawler, SportsEngine