The senior's goal with 1:01 remaining in the third-period put the Moose into next week's 1A state tournament. 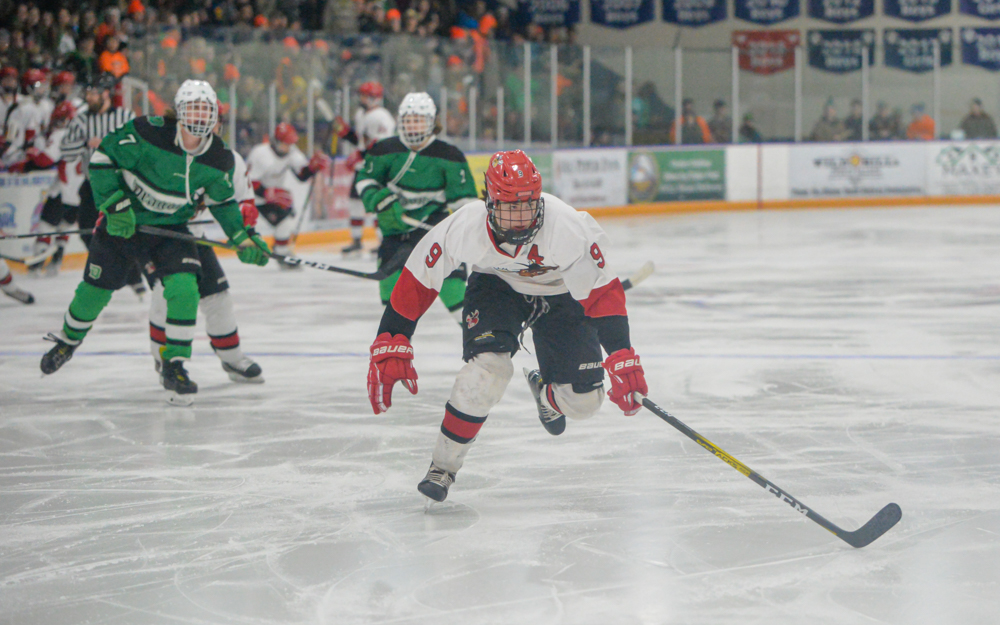 Monticello’s Huntley Hinz (9) scored the winning goal with under two minutes remaining in the third-period. The Moose went on to defeat the Dragon’s 6-4 in the Class 1A, Section 5 final Thursday night at Fogerty Arena. Photo by Earl J. Ebensteiner, Sports

When Pine City Area scored with 1:15 remaining in the third period to tie the 4-4, Monticello coach Eric Nelson admitted his thoughts began to turn to the potential of overtime.

Seconds after those thoughts crossed his mind, they became a distant memory.

Fourteen seconds after the Dragons tied the game Moose senior forward Huntley Hinz came down the ice and ripped a shot past Pine City Area senior goaltender Alex Laven. That goal proved to be the game-winning goal as Monticello defeated the Dragons 6-4 in the Class 1A, Section 5 final on Thursday at Fogerty Arena in Blaine.

Hinz’s goal, which put Monticello (19-7-1) back in the state tournament for the first time since 2018, was part of a hellacious stretch of hockey that produced four goals in less than three minutes of action.

It started with 2:45 remaining in the third-period when Moose senior defenseman Jacob Sorensen fired a laser from near the blue line to put top-seeded Monticello ahead 4-3. It was the second time Sorensen had beaten Laven with a longer shot. 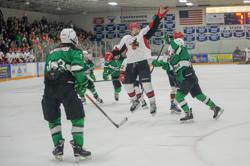 “We were concerned about them scoring from that area,” Pine City coach Grant Nicoll said. “We were worried about being able to track their shots.”

When the Dragons (21-7-0) fell behind after Sorensen’s goal, it was hardly a new development as they had trailed much of the first and part of the second period. Aside from that, Pine City Area had become a team not afraid to come back on its opponent.

“I’ve talked to other coaches and other people who’ve seen our team and they are always amazed at how we come back so often,” Nicoll said. “It shows a lot of mental toughness and makes our jobs as coaches much easier,”

The third-seeded Dragons showed their fighting spirit when they scored on the power play with 1:15 left in the third-period. Senior defenseman Justin Gamec found the back of the net after his team had peppered Monticello throughout the evening.

“We really could not have any sustained constant pressure,” Nelson said. “We were having to weather their storm. Credit to (Pine City) for tipping the tide like they did.”

After Gamec’s goal, however, the tide wasn’t tipped for long. Hinz quickly skated down the ice and found himself in front of the net. Many of the Dragons slowed thinking Monticello was offsides, but the referees never made the call. The senior ripped the shot into the net, sending the jam-packed Fogerty Arena into a frenzy.

“Right when they tied it, I knew we had to score and shut them up,” Hinz said. “I had the puck on my stick and fired the shot. I don’t think the goalie was expecting a shot.

Moose senior forward Jeffrey Hendrikson scored his second goal of the game on an empty-netter to put an exclamation point on the win for the Moose.

With that tally, all six of Monticello’s goals came from seniors. They’re a group who experienced a state tournament in 2018 but were sent home unexpectedly when the Moose were upset in last season’s section semifinals.

“Every year we look to our seniors and talk about the legacy they’re gonna be leaving here,” Nelson said. “They wanted to get back to state after missing a year. They’re always huge in our success and that was true again tonight.”

Now, Monticello will return to St. Paul after a one-year absence. It’s the third time the Moose will hit that Xcel Energy Center ice. It’s something that has importance not only to the seniors playing but those watching.

“I work at the elementary school and it’s something even those kids talk about,” Hinz said. “Kids recognize us and recognize when there’s that success. It’s important for us to give them something to cheer about and help make our program better.” 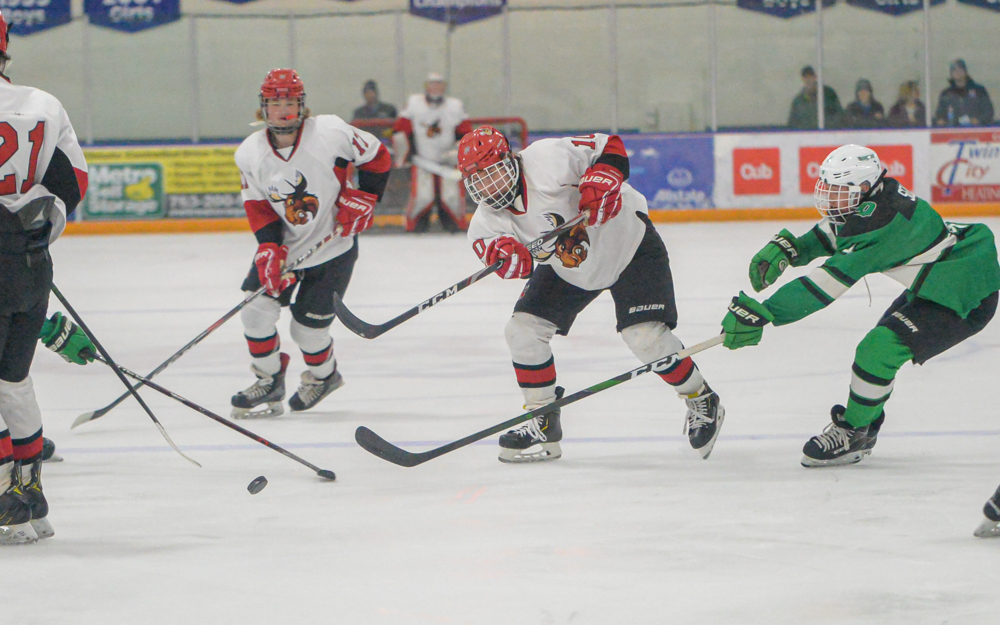 Fourteen seconds after Pine City Area scored on the power play to tie the game at 4, Huntley Hinz scored the goal of the season for Monticello. The senior forward’s goal with 1:01 left in the third period proved to be the game-winner as the Moose defeated the Dragons 6-4 in the Class 1A, Section 5 final at Fogerty Arena in Blaine.

The top-seeded Moose (20-7-1) jumped out early to a two-goal lead in the first period. Seniors Jacob Pederson and Jacob Sorensen each scored to make it 2-0.

Late in the period, Pine City (21-7-0) got some life when senior defenseman Dusty Bergstrom snuck one in to make it 2-1 after 17 minutes.

After senior forward Jeffrey Hendrikson’s power-play goal made it 3-1, Pine City Area roared back with a pair of goals and sent the game to the third-period tied at 3.

In the final period, the two teams traded solid opportunities. Then, with 2:45 remaining in the third-period, Sorensen scored his second goal of the night to make it 4-3.

From there, the scoring was on. Justin Gamec tied the game for the Dragons with 1:15 left in regulation with a power-play tally.

That goal was upstaged shortly by Hinz, which made it 5-4. To seal the deal, Hendrikson scored his second of the game with an empty-net goal that clinched the win for Monticello.

In the win, Moose goaltender Nash Wilson stopped 22 of 26 shots. Alex Laven made 26 saves for Pine City, which was making its first section final appearance in 18 years.

With the win, Monticello returns to the state tournament for the first time since 2018. The Moose will open play at the Xcel Energy Center on Wednesday. Pairings will be announced on Saturday. 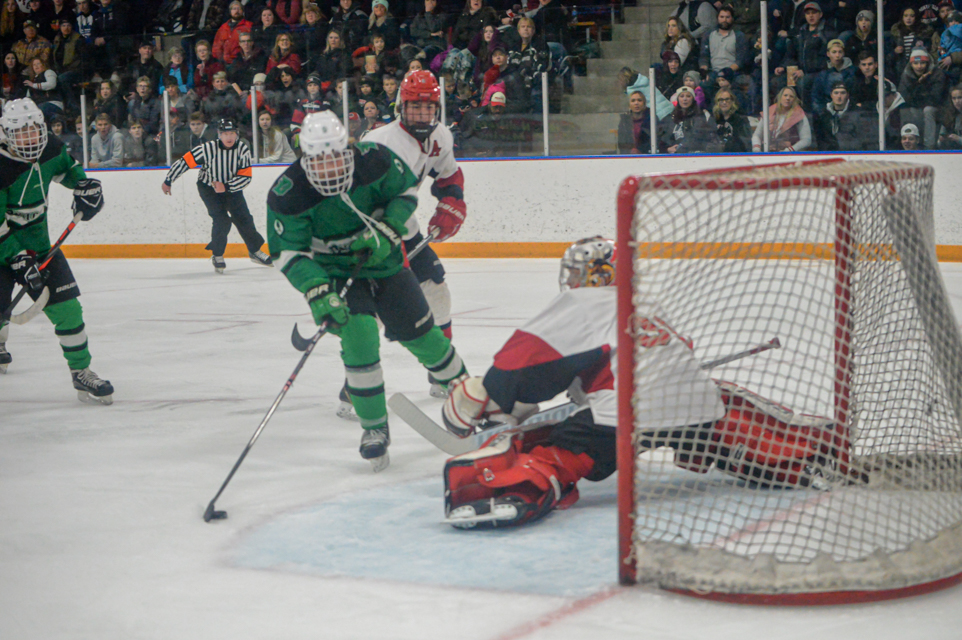 The Dragon’s Gabe Westbrook picks up a goal in the second-period of the Class 1A, Section 5 final. The Dragon’s lost to the Moose Thursday night 6-4 at Fogerty Arena in Blaine. Photo by Earl J. Ebensteiner, SportsEngine