The Cougars' offense bombarded the Raiders, but only scored midway through the third period. 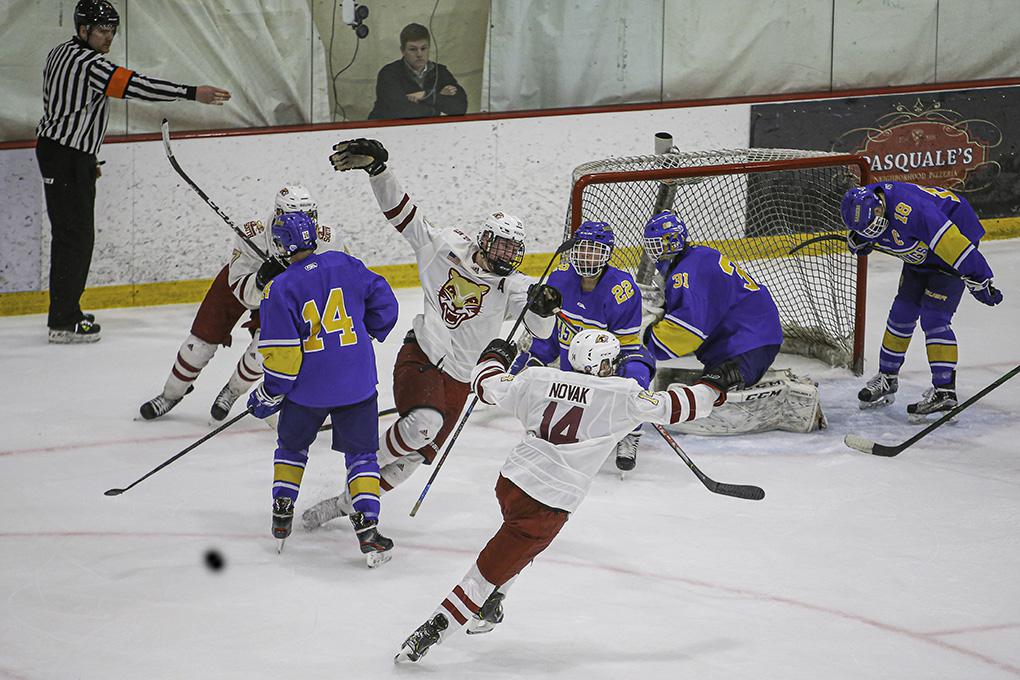 Hastings took the punches for almost three periods, but in the end the attack from top-seeded Lakeville South was simply too much for the third-seeded Raiders in the Class 2A, Section 1 boys' hockey championship Thursday night at the Rochester Recreation Center.

Cade Ahrenholz's goal just over two minutes into overtime capped a 3-2 Lakeville South victory, ending the Raiders' quest for their first state tournament berth since 2001, and sending the Cougars to the state tournament for the third time in four seasons.

"We knew (the goals) would come," Ahrenholz said. "We just had to get that first one, and then they would come."

Lakeville South (21-7-0) averaged 4.5 goals per game this season and scored 14 in its first two section tournament games. But the Cougars didn't score for the game's first 44 minutes despite outshooting Hastings 43-17 and having four power play opportunities in that time. 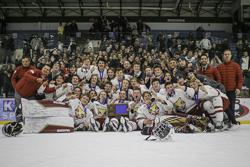 McCarville faced 49 Lakeville South shots in the game and turned away 46 of them. He had 39 saves before Lakeville South junior Jack Malinski, on the Cougars' fifth power play of the game, finally broke the ice at 6:23 of the third period. Just over seven minutes later, junior Cam Boche scored with 3:26 left in regulation to tie the game at 2-2.

"It's just devastating right now," Hastings coach Adam Welch said. "To be three and a half minutes away..."

Depth might have helped the Cougars outlast Hastings (19-6-3). Lakeville South coach Janne Kivihalme said he rotated in four lines for much of the game and that his team had fresher legs going into overtime.

The door opened wide for the Cougars when Ahrenholz drew a hooking penalty in front of the Hastings net on sophomore defenseman John Chorlton with 2:01 elapsed. Seconds later, Ahrenholz found the opening he was looking for.

"We put a puck on net, I saw it on the back door, came across the net and hammered it home," Ahrenholz said.

"Too many penalties," Welch said.

Hastings came into the game averaging 5.25 goals per game but had a hard time finding shots against the Cougars. The Raiders had 12 shots in the first-period and scored twice, on goals by Griffin Wise and Chase Freiermuth to take a 2-0 lead they desperately tried to hang on to. But Hastings recorded just five shots in the next 31 minutes of play as Lakeville South clawed its way back.

"Defensively we played pretty good," Kivihalme said. "We stuck to our game plan."

That plan now includes a trip to Xcel Energy Center in St. Paul for the Class 2A state tournament. 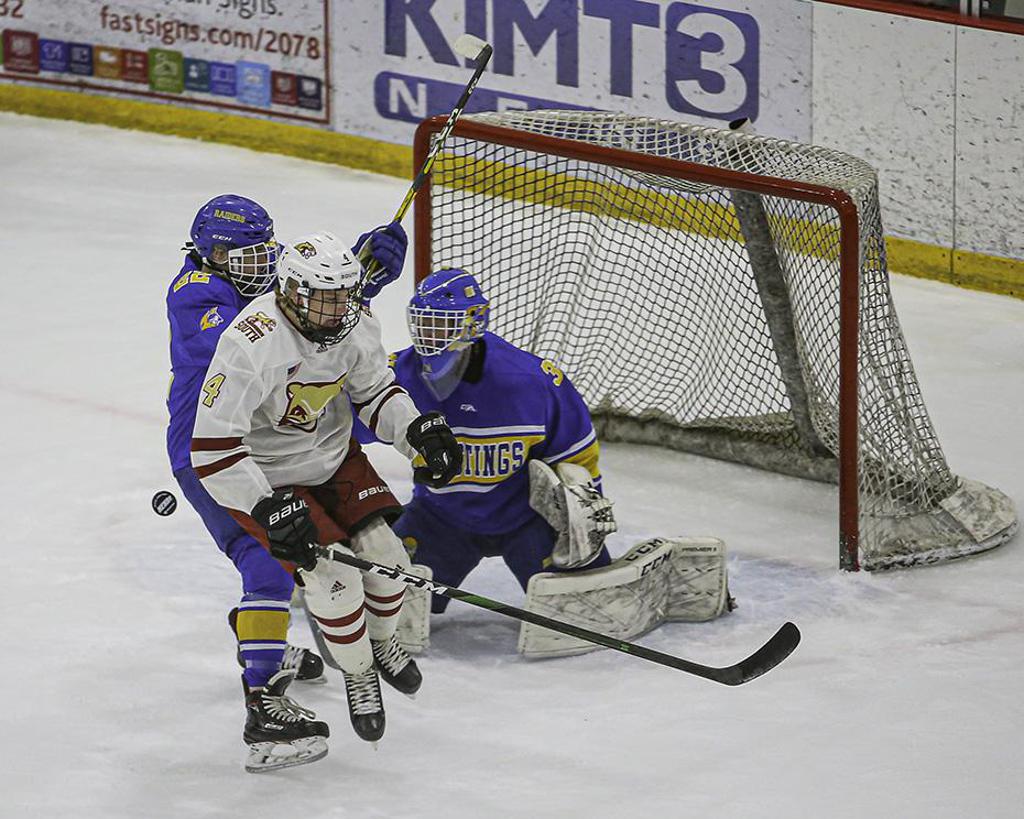 Tanner Ludtke (4) and the Cougars found the going tough around the net for most of the game. Photo by Mark Hvidsten, SportsEngine

Hastings had kept the high-scoring Cougars off the board until mid-way through the third-period despite being outshot 43-17.

Lakeville South scored on 50 percent of its power play opportunities during the season but the Raiders shut the Cougars down on the first four attempts in building a 2-0 lead.

South finally broke through Hastings' defensive wall at 6:23 of the third period. After failing to score on its first four power-play attempts, Lakeville South got on the board on its fifth try. Jack Malinsky scored with 78 seconds left on an interference penalty on the Raiders' Leo Otto.

South dominated the puck for the game's first three minutes, keeping it in Hastings' end and outshooting the Raiders 5-0. But when Hastings finally got its chances, the Raiders made Lakeville South pay.

Sophomore forward Jake Harris came up with a puck in the Hastings zone and took off a step ahead of the Cougars' defense. His shot bounced off goalie Cody Ticen's stick but Wise was free on the right side to collect the rebound and poke the puck over Ticen's outstretched leg for a 1-0 Raiders lead at 6:21. That goal equaled the number of goals Lakeville South had allowed in each of the first two tournament games and it was the first time South trailed in the postseason.

With just under two minutes to play in the opening period, Jack Klimek took advantage of another Lakeville South turnover in the Hastings zone and pushed the puck up the ice. His pass to the left sailed past Freiermuth, but the Hastings senior caught up with the puck, carried it behind the Cougars’ goal and tapped it past Ticen from the right side. It was Freiermuth's fourth postseason goal.

The Cougars regained control in the second period, outshooting Hastings 20-2, but failed to score. Hastings killed off three penalties, including 19 seconds of five-on-three, to keep Lakeville South off the board. 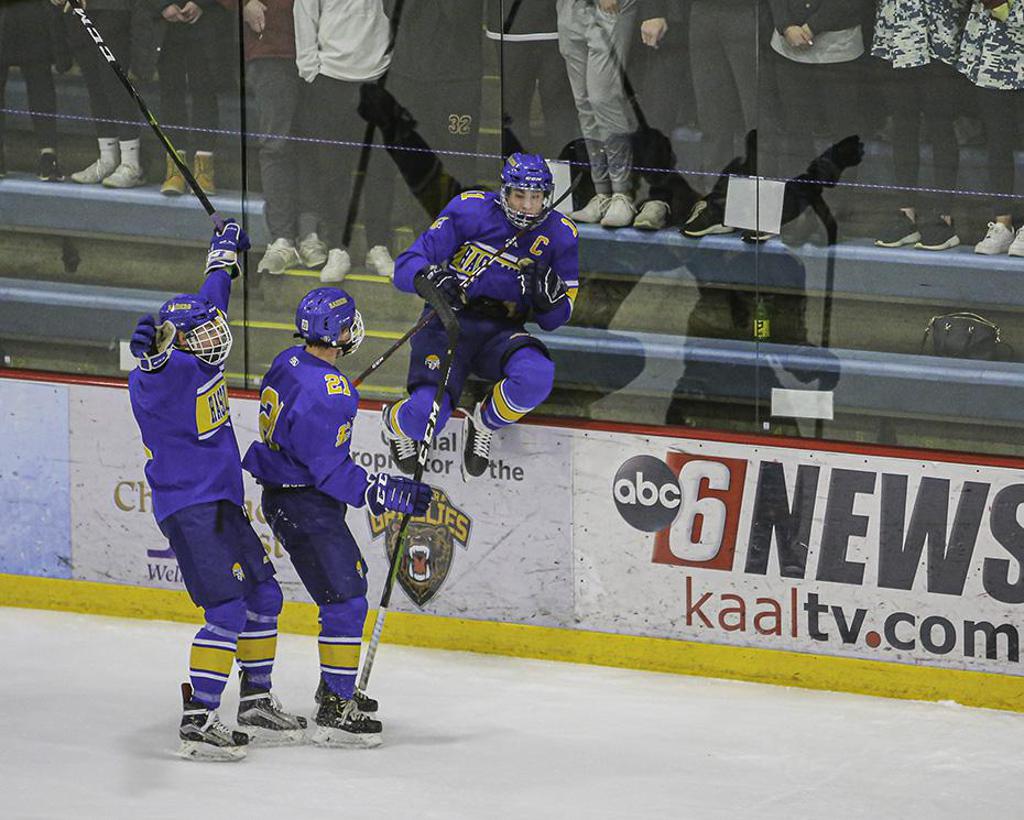