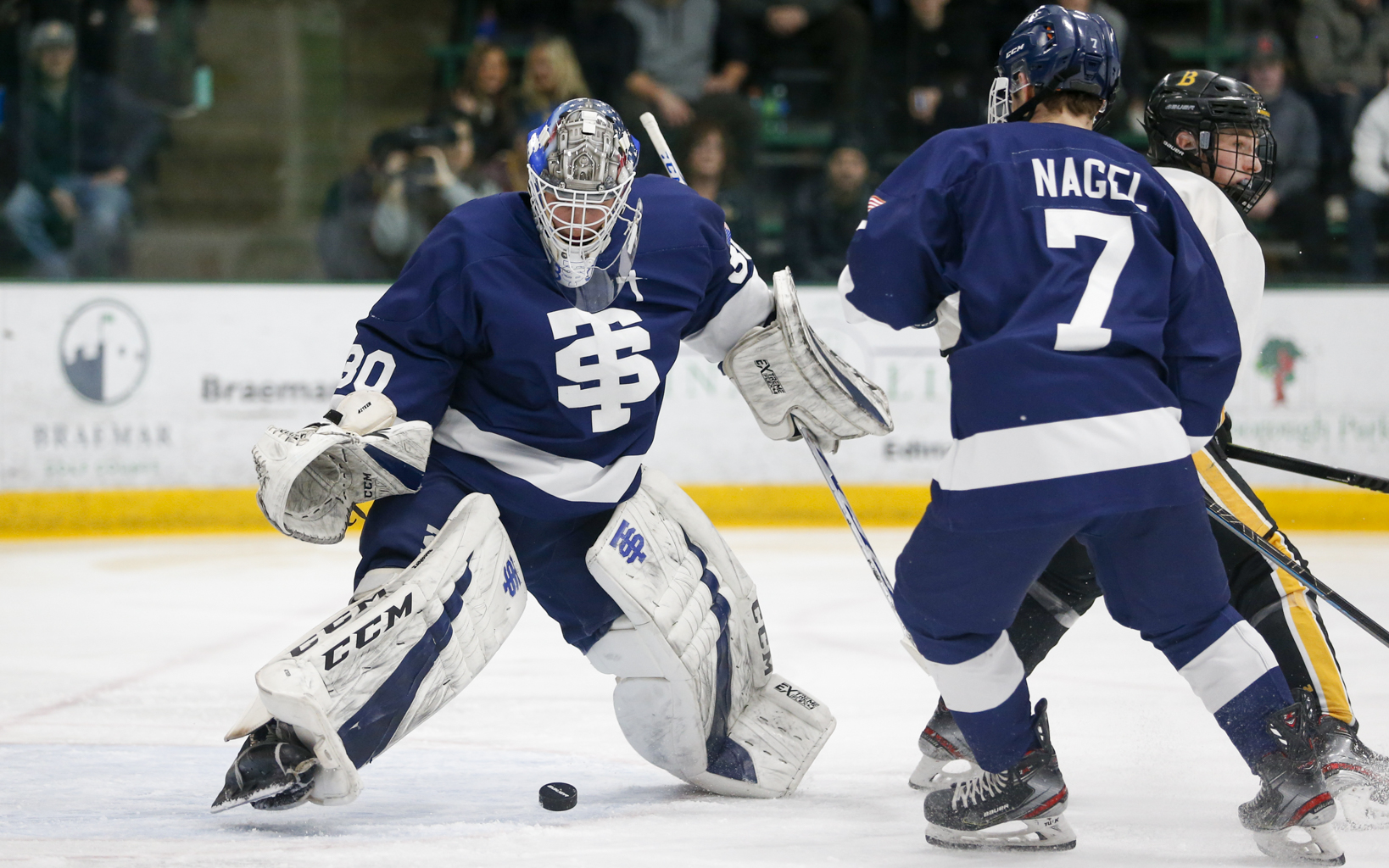 St. Thomas Academy's Tommy Aitken (30) makes a skate save on a deflection in front of the net against Burnsville Thursday night. Aitken had 29 saves in the Cadets 2-0 victory over the Blaze at Braemar Arena. Photo by Jeff Lawler, SportsEngine

St. Thomas Academy forward Will Soderling corralled a pass from defenseman Nick Owens just inside the Burnsville blue line, wound up his stick and paused.

Soderling wanted to wait to shoot until the Burnsville defender in front of him slid past, he said after the game. The move worked. His slapshot found the back of the net, and the goal proved to be all the Cadets needed in a 2-0 victory over the Blaze in the Class 2A, Section 3 championship at Braemar Ice Arena.

“It was kind of a for-real moment,” Soderling said, adding that he didn’t know at first if the shot went it. “When I just heard the crowd going, I was going crazy.” 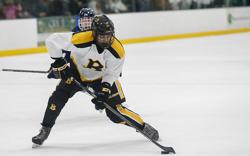 Tommy Aitken made 29 saves, and defenseman Connor O’Brien scored an empty-netter with 1:34 to go for the fifth-seeded Cadets (18-8-2).

The Cadets clinched their fourth consecutive state tournament appearance and first under new coach Trent Eigner. It came after a 5-7-2 start to the season.

“The kids were just amazingly resilient in what we were trying to accomplish,” Eigner said. “Obviously we got our feet under us, and here we are.”

Aitken saved 11 shots in the third period, and his defenders held stout.

“Proud of the way they battled the whole game,” second-year coach Steve Beaulieu said. “We could have used a bounce one way, but we didn’t get it, and that’s just the way it goes.” 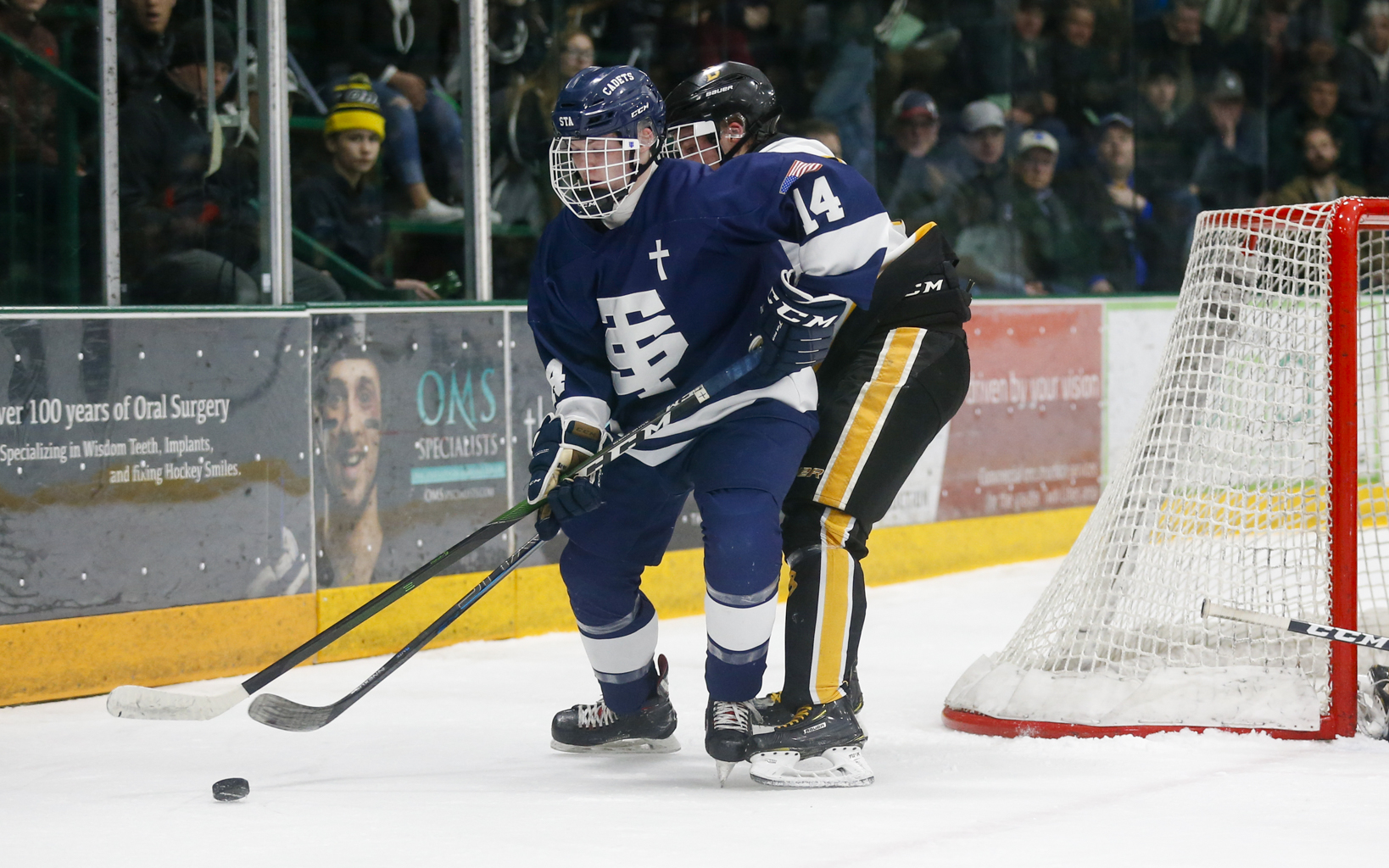 STA's Will Soderling (14) tries to shed a Burnsville defender in the Class 2A, Section 3 championship Thursday night. Soderling’s second period goal proved to be the game-winner in the Cadets' 2-0 victory over the Blaze. Photo by Jeff Lawler, SportsEngine

A slap-shot goal from Will Soderling and a late empty-netter by Connor O'Brien lifted fifth-seeded St. Thomas Academy to a 2-0 victory over second-seeded Burnsville in the Class 2A, Section 3 championship game Thursday at Braemar Arena in Edina.

Soderling's goal came 4:31 into the second period. O'Brien's goal came with 1:34 to play in the third, after Burnsville had pulled goalie Evan Wittchow to try for the equalizer.

Burnsville (17-9-2) was looking for its first state tournament appearance since 2016. The Blaze out-shot St. Thomas Academy 12-11 in the first period but didn't generate many chances against the Cadets after that.