The Zephyrs jumped out to a two-goal lead in the first period en route to a 5-1 victory over the Packers. 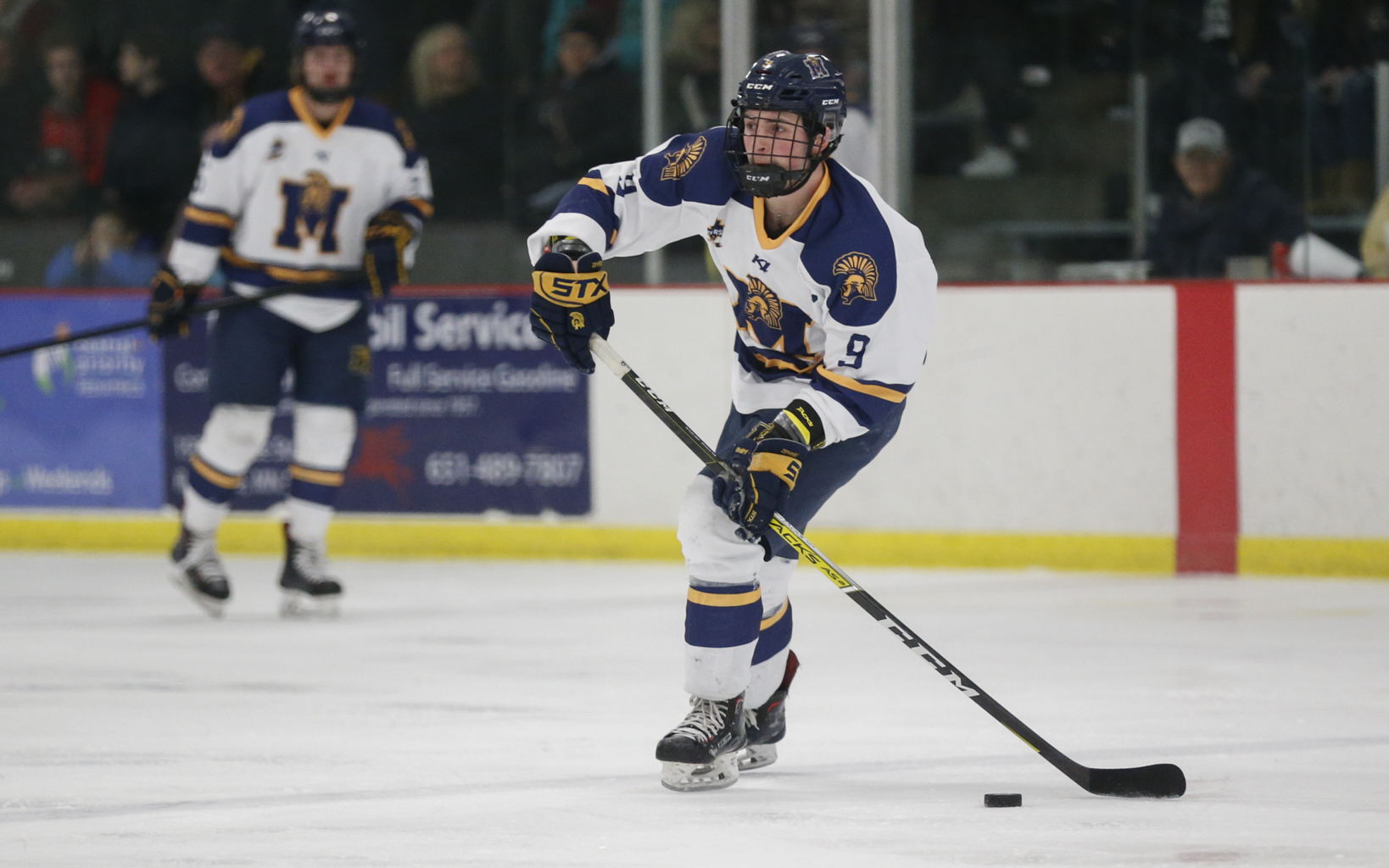 Mahtomedi's Nikolai Dulak (9) sends a pass across the ice during Friday night’s game against South St. Paul. Dulak had a goal and two assists in the Zephyrs’ 5-1 victory over the Packers in Roseville. Photo by Jeff Lawler, SportsEngine

For Nikolai Dulak and Colin Hagstrom, section finals always end with a championship in their favor.

Dulak and Hagstrom are the lone seniors on the Mahtomedi boys’ hockey team who have been on the team each of the past four years to capture four consecutive Class 1A, Section 4 titles. The latest came with a 5-1 victory over South St. Paul on Friday at Roseville Ice Arena.

For Dulak, who assisted on the first two goals before adding an empty-netter, the section title gets better every year.

“I actually said that before the game started,” Dulak said. “It gets better every single time.” 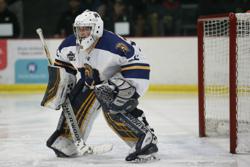 In a section tournament full of upsets this year, top-seeded Mahtomedi (20-8-0) made sure it didn’t fall victim to the same fate.

The Zephyrs took a quick 2-0 lead in the first period with a power-play goal from Hagstrom and a shorthanded goal from Blake Hansen, his third of the season and Mahtomedi’s third shorthanded tally of the year.

On the first one, Hagstrom scored a back-door goal only 26 seconds into the game’s first power play. A few minutes later on the penalty kill, Dulak passed the puck over to Blake Hansen who fired a shot from the top of the circles for the team’s third shorthanded goal of the season.

“The first goal just really got us going into the game,” said Dulak, who assisted on both. “It was so quick and just happened so fast.”

Dulak is a tenacious leader for the Zephyrs who leads with his actions, according to coach Jeff Poeschl. “He always shows up in big moments, and he did again tonight.”

Junior Ethan Peterson scored the next two goals — his eighth and ninth of the season. The first extended the lead to 3-1 through two periods before he scored again with 3 minutes, 45 seconds to play in the third period.

That fourth goal extended the breathing room for the Zephyrs.

“Because at that point where it was 4-1, we kind of just settled down a little bit,” Peterson said.

It was the reward for plenty of Zephyrs scoring chances that were either stopped or just missed the net. Mahtomedi outshot the Packers 19-3 in the third period alone and 50-24 for the game. The Packers (12-12-4) had initially cut the deficit to 2-1 in the second on a goal by Jayce Schauer.

“We had chances, we had zone time, we had pressure,” Poeschl said. “Everything except for the goal. And so, when that fourth one went in, we were able to just breathe a sigh of relief and finish the game.” 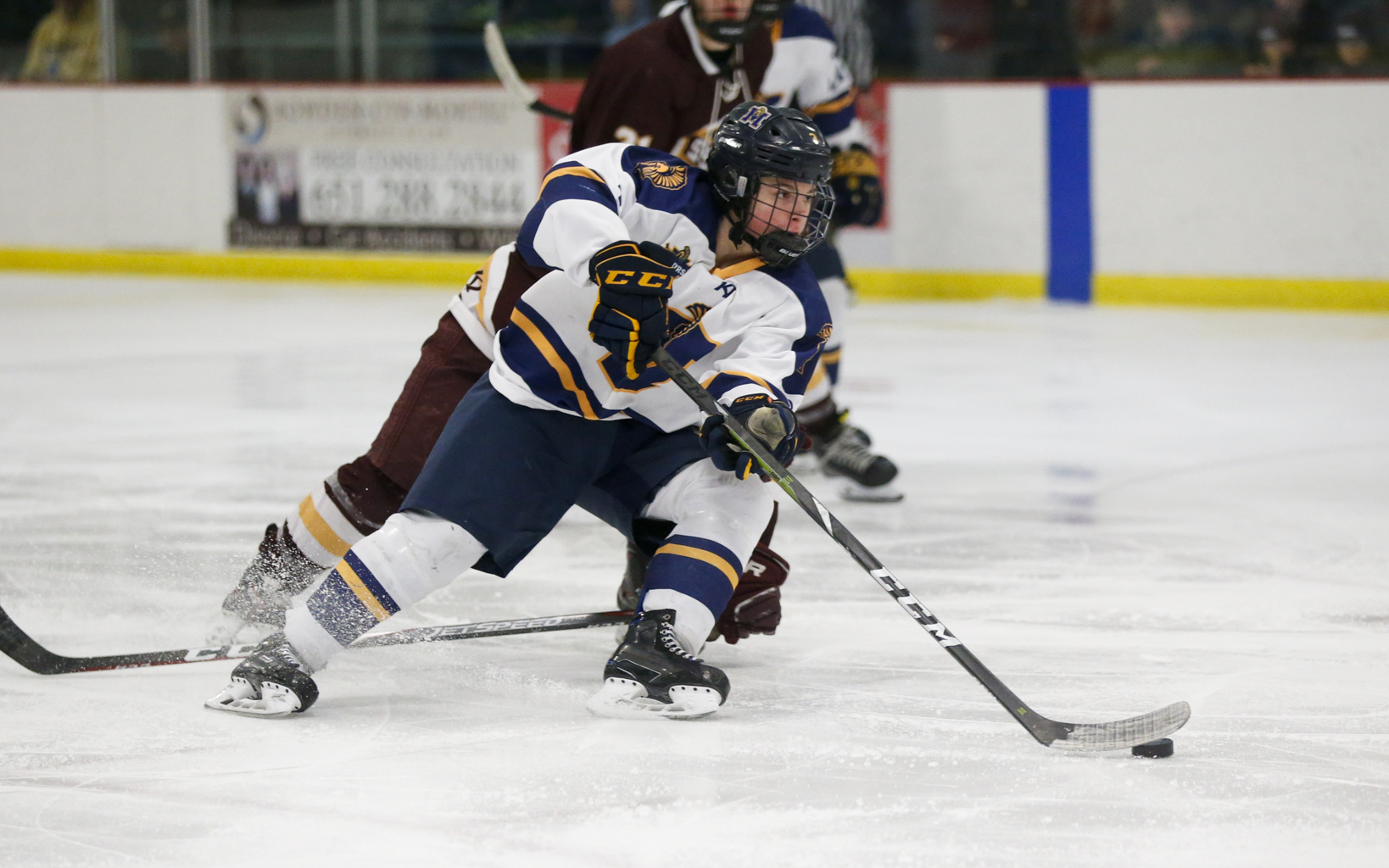 Mahtomedi's Grant Dardis (3) gets around a South St. Paul defender during Friday night’s Class 1A, Section 4 final. The Zephyrs defeated the Packers 5-1 to advance to next week’s state tournament. Photo by Jeff Lawler, SportsEngine

In a section tournament full of upsets, top-seeded Mahtomedi made sure it didn’t fall victim to the same fate.

Mahtomedi took a quick 2-0 lead in the first period with a power-play goal from senior Colin Hagstrom and a shorthanded goal from Blake Hansen for his third of the season and the third shorthanded tally of the year for the Zephyrs.

Junior Ethan Peterson scored two goals -- his eighth and ninth goals of the season to give Mahtomedi 3a 4-1 lead. Senior Nikolai Dulak had two assists and an empty-net goal.

South St. Paul senior Jayce Schauer scored in the second period for the sixth-seeded Packers (12-12-4) in their first section final appearance since 2008. It was the first goal Mahtomedi allowed to South St. Paul in their three meetings this season; the Zephyrs won all three games against their Metro East Conference rival.