The postgame handshake line take a lot longer when the Colorado College-bound Gleason is in it. His ferocity as a player and leadership helped distinguish him as a special "once-in-a-lifetime kid,'' his coach said. 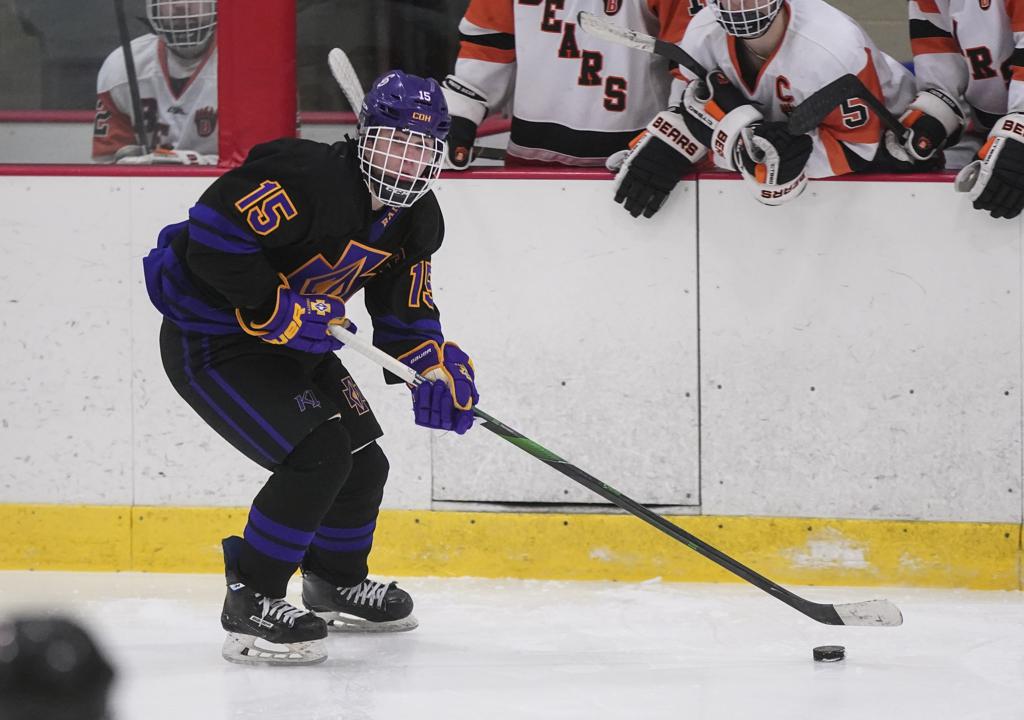 “He’s a Swiss Army knife,” Cretin-Derham Hall coach Matt Funk said of Gleason, who had 36 goals and 42 assists this season. “He can play in any situation. He’s our best penalty killer and our best power-play guy. He does it all.”

The postgame handshake procession feels like a wedding receiving line, with opposing players and coaches eager to greet Raiders forward Matthew Gleason. He even looks the part of a groom when clad in the team’s road jerseys, black with purple trim.

The pace during games couldn’t be more different. Sure, Gleason is fast. But it’s his ferocity — battling for the puck like it’s a family heirloom, from the national anthem to the final horn — that earned him great respect.

Gleason is the Star Tribune Metro Player of the Year.

“The biggest thing I’ve noticed as a senior this year is that the game will take care of itself,” Gleason said. “It’s how you carry yourself and how you lead the young guys. It’s taking those guys and bringing them with you to play at a higher level.”

This past season a young Cretin-Derham Hall team required every ounce of Gleason’s leadership, a product of his four years on the varsity level. On a typical gameday, the Raiders hit the ice with a combined nine juniors and seniors, and a combined 12 sophomores and freshmen.

A two-time captain, Gleason said living up to the title “isn’t always easy. You got to be friends with the guys but at the same time, you’ve got to do what’s best for the team. I love all the guys on my team, but we had a goal in mind all season and that was the No. 1 thing.”

Gleason, a 5-8, 170-pound dynamo who signed with Colorado College, led his team with inspired play and scored in bunches. He tallied 36 goals and accounted for 42 assists in 27 games.

“He’s a Swiss Army knife,” Funk said. “He can play in any situation. He’s our best penalty killer and our best power-play guy. He does it all.”

Gleason assisted on three goals as Cretin-Derham Hall won 5-4 at White Bear Lake in the regular-season finale. On the ice, he stood out among both team’s talented forwards. On the bench, Funk said, “He was telling our young guys ‘This is what the section playoffs will be like. Don’t give up.’ ”

Gleason once stood in their skates. As a freshman, he scored 23 goals and learned about leadership observing older brother John, a senior and assistant captain.

“When you’re younger, you’re more looked at for how you can contribute as a player,” Gleason said. “As you get older, it’s about how you can take a leadership role. It’s not so much about yourself, it’s more about the guys around you.”

Together, the Raiders rebounded from a 0-2 start to win 20 games and the Suburban East Conference title. Highlights included victories against Benilde-St. Margaret’s and Blaine, and a 5-5 tie at Hermantown when the Raiders fought back from two- and three-goal deficits.

A two-game conference sweep of White Bear Lake also proved the Raiders meant business. After the second game, Bears coach Tim Sager waited at the end of the handshake line.

“I wished him luck with his future,” said Sager, a Cretin alum. “And I told him how much I appreciated him staying in high school hockey for his senior year.”

Gleason, a product of St. Paul’s Highland Catholic and Nativity of Our Lord schools, played youth hockey in the St. Paul Capitals Hockey Association. He called the Charles M. Schulz-Highland Arena home for about 15 years, culminating in a Feb. 20 section playoff game against St. Louis Park.

Falling short of the state tournament could not change Funk’s view of Gleason.