The Mr. Hockey finalist got the Hawks going with two goals in the first period en route to a 7-1 victory. 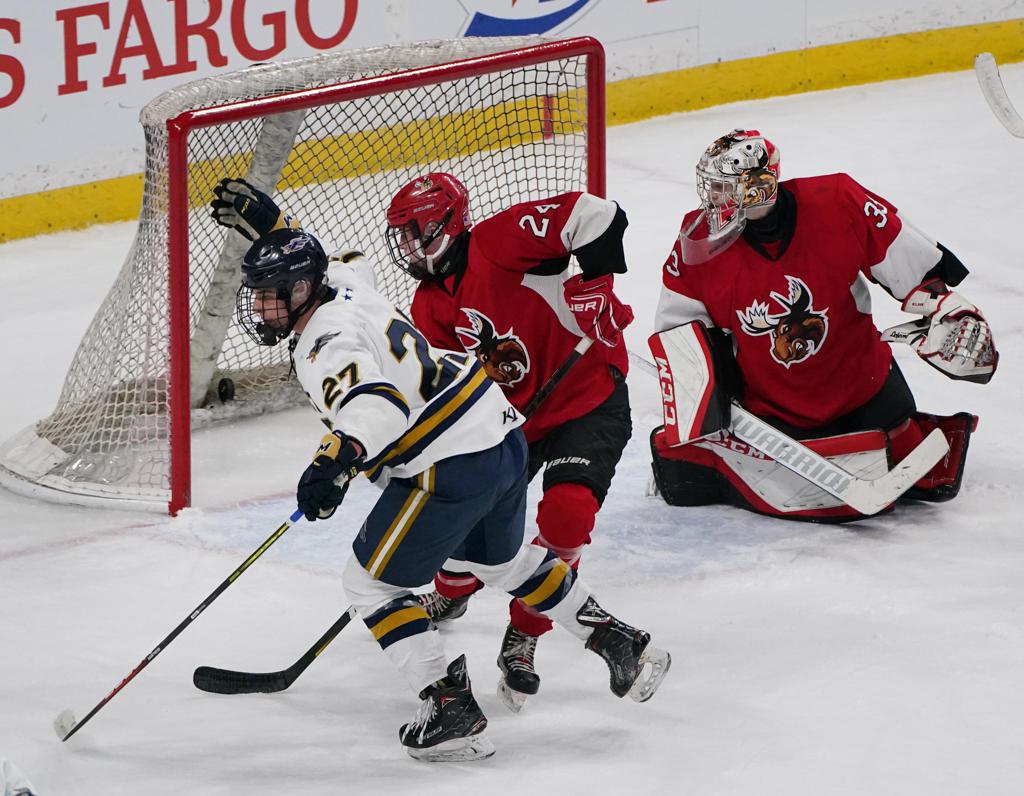 “He’s such a dynamic player that he’s hard to stop whatever you run against him,” Monticello coach Eric Nelson said Wednesday after Biondi’s hat trick led the No. 3-seeded Hawks to a 7-1 victory over the unseeded Moose (20-8-1) in a Class 1A quarterfinal at Xcel Energy Center in St. Paul.

The 6-foot, 180-pound Biondi, thick as a tree trunk, isn’t your typical high school player in terms of size.

“His wrists are as big as my ankles,” Hawks coach Pat Andrews said about his senior Mr. Hockey finalist.

Biondi sees the game differently, too. He was thinking two steps ahead when he cruised through the slot en route to his first goal. 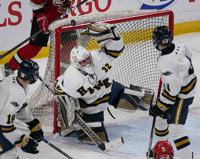 “I looked five-hole, and it wasn’t quite there, so I was ready for it either way,” Biondi, a Minnesota Duluth recruit, said about his encounter with Monticello goaltender Nash Wilson. “Just get it off his stick and bang it home.”

So that’s what Biondi did to give Hermantown a 1-0 lead less than three minutes into the first period. His third goal was a direct result of those massive wrists, as he uncorked a shot from the top of the right circle that zipped past Wilson’s left ear.

“Nerves are there just because you want to win so bad,” said Biondi, a projected early-round NHL draft pick who increased his season goal total to 46, “but I just wanted to get the job done.”

Biondi needed just 2:58 open the scoring, popping home the rebound of his initial shot at as he cruised through the crease. His deflection from pretty much the same spot with 50 seconds left in the opening period put the No. 2-ranked Hawks (22-3-4) ahead 2-0 after one period.

Biondi, who has committed to play at Minnesota-Duluth, scored his third of the game and 46th of the season when he ripped a shot over Monticello goaltender Nash Wilson with 23 seconds left in the second period. Aydyn Dowd also scored in the second for Hermantown.

The Moose's lone goal came when a backhand dump-in from just beyond center ice in the third period by Monticello’s Riley Ronayne bounced high off Hermantown goaltender Jacob Backstrom’s blocking glove and landed in the net.

Wilson made 29 saves on 36 shots for the Moose (20-8-1) before backup Michael Biller took over late in the final period. Backstrom made 17 saves before giving way to backup David Rutka, also late in the third period.

The state tournament matchup was the third in four years between the teams, all three won by Hermantown.