Blake holds off Maple Grove 7-5 in 2A tourney debut

The Bears' Will Svenddal scored on a power play to break 5-all tie after a ''game-changer'' slashing penalty called on the Crimson late in the third period.. 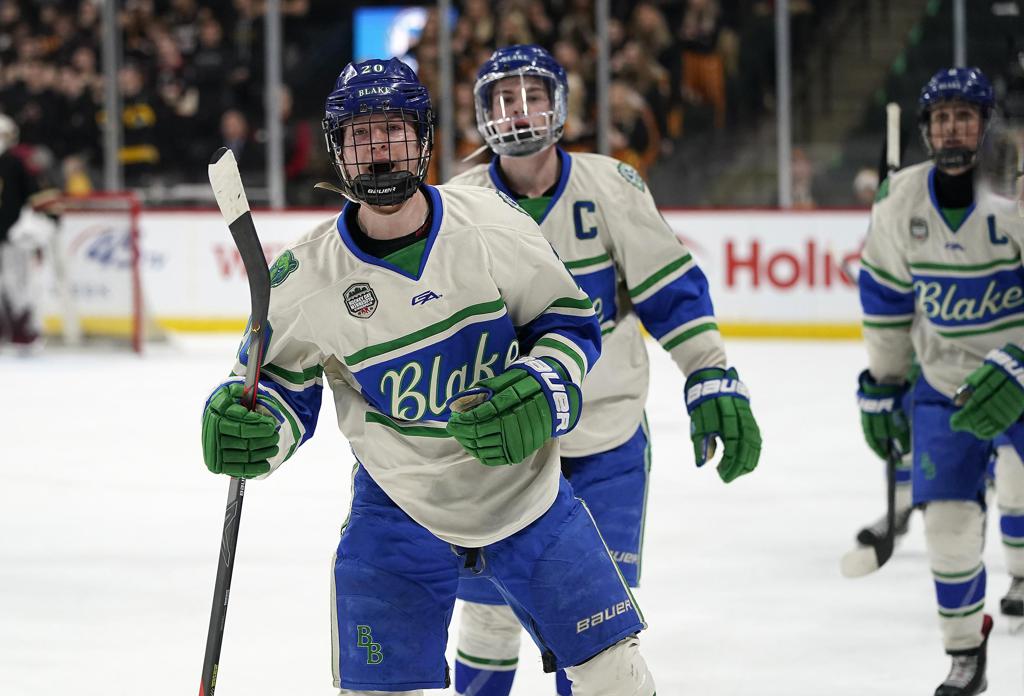 Blake forward Joe Miller celebrated a goal in the first period against Maple Grove. He finished the game with a hat trick. Photo: LEILA NAVIDI • leila.navidi@startribune.com

Maple Grove boys’ hockey coach Todd Bergland said after his team’s 7-5 loss to Blake, during which the teams were tied on four different occasions, “18,000 people got to see a heck of a hockey game.”

What referees saw on a late slashing penalty left Bergland perplexed. Senior forward Benjamin Leafblad got whistled with less than four minutes to play in a game tied 5-5. Blake’s Will Svenddal’s power-play goal broke the deadlock.

“It was a hard way to go out,” sophomore forward Joshua Giuliani said. “We battled all game and I thought we were the better team. They got some lucky calls that I thought were not very good.”

Giuliani’s second goal of the game tied the game 5-5. Earlier in the third period, Blake scored shorthanded on a 2-on-0 rush. Gavin Best, who scored on a penalty shot to win the Section 6 title game in overtime, passed to Joe Miller for a 4-3 Bears’ lead.

“I love that,” Blake coach Rob McClanahan said. “It’s not just fun to watch, it’s fun for the guys that are doing it.” 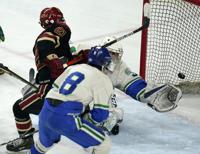 Jack Sabre added a wrap-around goal and Blake seemed in control. But Maple Grove, resilient in the face of injuries all season, fought back.

“When they got those goals and they started coming back, we said, ‘We’re not done yet,’ ” Sabre said. “We had to meet their intensity every shift.”

Replay showed Leafblad knock the stick out of Svenddal’s right hand while battling for position.

“That clearly wasn’t a penalty,” Bergland said. “Refs are human. They make mistakes. It’s a tough profession and I commend them for everything. But that was the game-changer right there.”

It wasn’t easy, but Blake outlasted Maple Grove for a 7-5 victory in a wild Class 2A quarterfinal game Thursday afternoon at Xcel Energy Center in St. Paul.

Maple Grove started the rematch holding brief one-goal leads thanks to Joshua Giuliani and Grant Zick. But standout Blake forward Joe Miller answered each time and the teams were tied 2-2 after the first period.

Jack Sabre put the Bears ahead for the first time with a goal at 9:35 of the second period. This time Maple Grove drew even on a rebound goal from Sam Jacobs early in the third period.

A penalty on Blake appeared to provide the Crimson an opportunity. Instead, Gavin Best and Miller got a 2-on-0 breakaway. Best, who scored on a penalty shot in overtime of the Section 6 championship game, passed to Miller, who scored for a hat trick and a 4-3 Bears’ lead.

A Sabre wrap-around goal scored a little more than two minutes later bumped the lead to 5-3 at 7:50 of the third period.

Back came Maple Grove, first on a power-play goal tipped in by Tyler Oakland. And next on a Giuliani shot a little more than one minute later to tie the game 5-5.